Apex Legends Monsters Within 2021: Skins And Everything To Know About The Halloween Event

Apex Legends‘ Halloween event, Monsters Within, is live now through November 2 and adds a bunch of spooky content to the game, including new legendary skins. The event also brings back the Shadow Royale limited-time mode and adds a new Arenas map to the game called Encore. Monster Within also features three different free reward tracks during the event, offering an epic Loba skin and a Monster Within Apex Pack among the awards. Here’s everything you need to know about Apex Legends’ Monsters Within event.

Monsters Within Event Collection And Store

Like previous events, Monsters Within has its own limited-time item collection and Apex packs featuring the items. Monsters Within does not have an Heirloom item up for grabs like other events, but it does have 40 event-exclusive items, including four new legendary skins for Bloodhound, Revenant, Seer, and Caustic.

The collection also includes four legendary gun skins, four epic legend skins, and four epic gun charms. The items cannot be purchased directly using Apex Coins. The items can either be crafted for double the usual amount of materials–2,400 for a legendary and 800 for an epic–or you will need to roll for the items by buying a Monster Within Apex Pack. The packs cost 400 Apex Coins, which is four times the price of a standard Apex Pack. Each event pack includes at least one event item and cannot give duplicates.

Some of the legendary Halloween skins from past events, like Wraith’s Emerald Enchantress skin and Bloodhound’s Wicked Harvest skin, will be available in the Monsters Within event store. Each skin bundle comes with a few bonus items, like a recolor of the legendary skin or a gun skin. The bundles are priced at 2,150 Apex Coins and new bundles will rotate into the store on October 26. 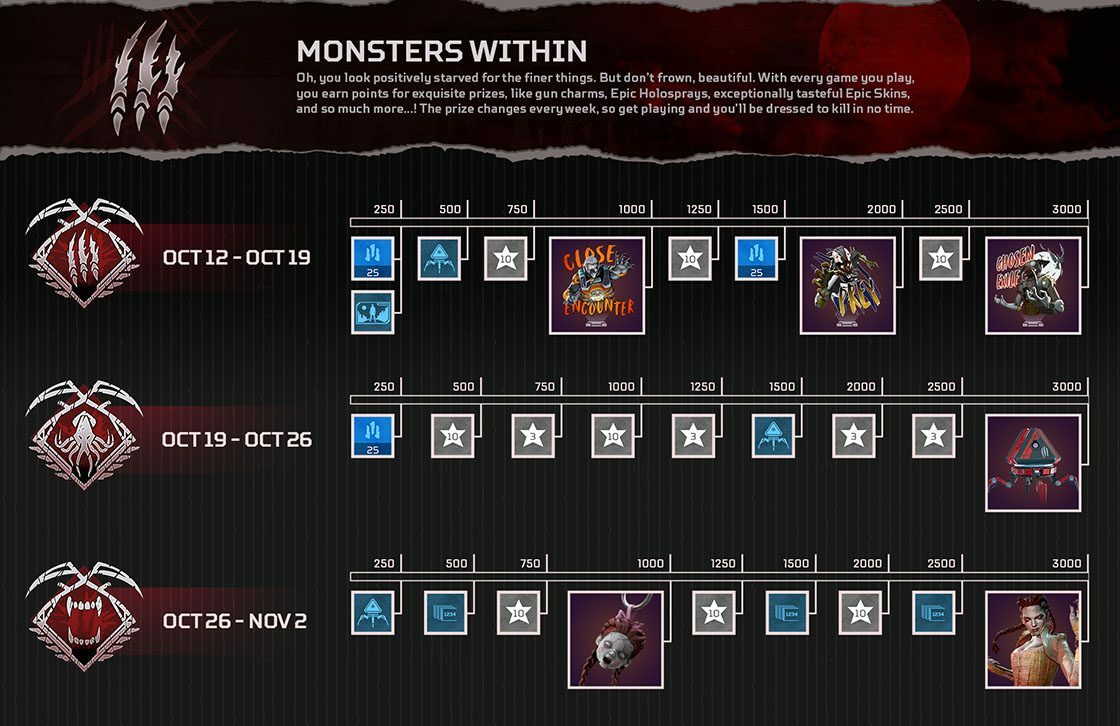 All three Monsters Within reward tracks

The Monsters Within event has three separate free rewards tracks, with each one lasting for one week of the event. Each reward track can be completed by finishing daily event challenges. For previous events, the challenges were the same each day so the challenges are likely to be static for most of the event, although they could change for each weekly reward track. All of the challenges also have a second tier, where even more points can be earned.

The challenges for Week 1 are:

New Arenas map and the return of Shadow Royale 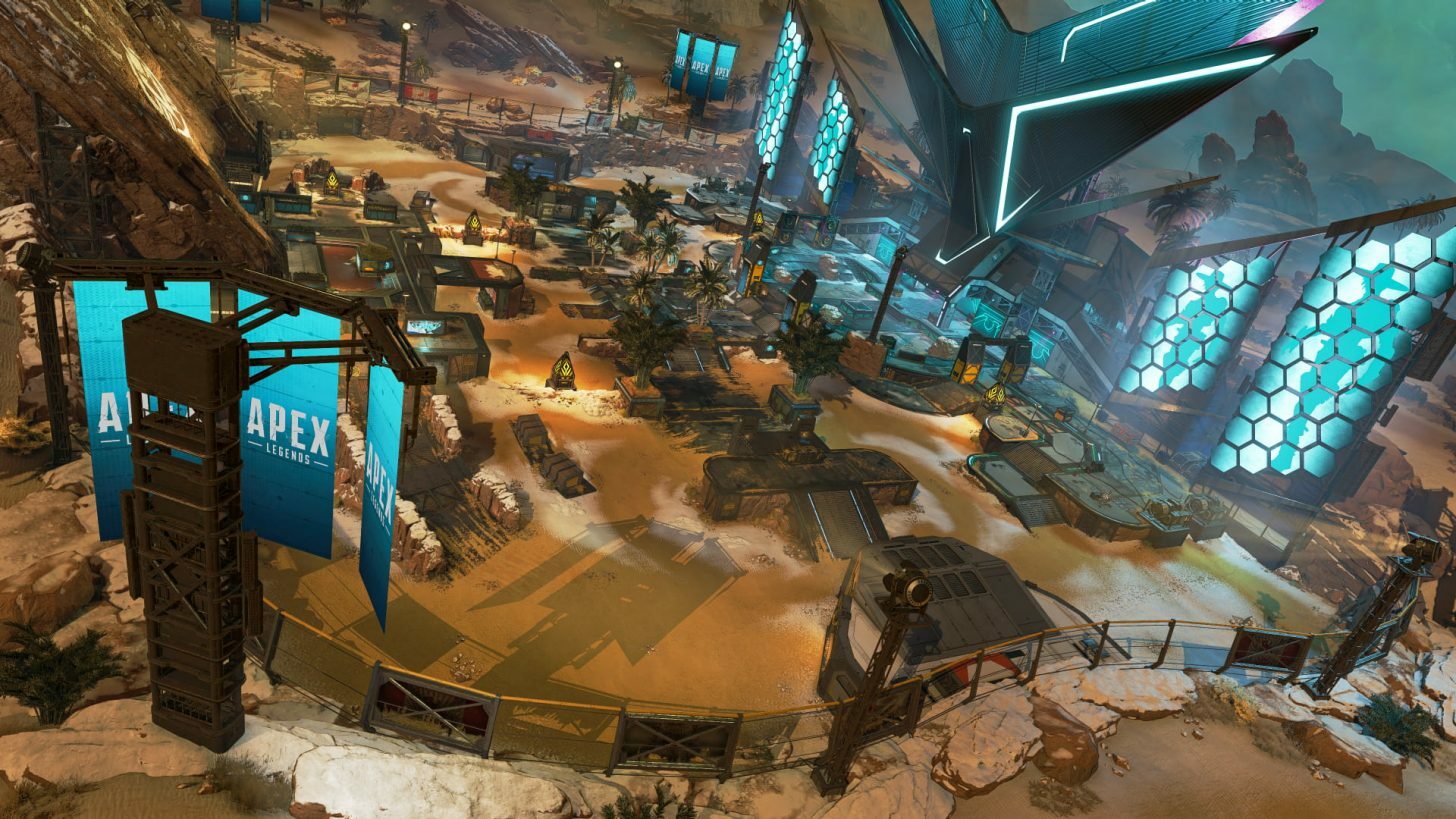 A new arenas map, Encore, has been added to the game as part of the Monster Within event, although this map is not time-limited like the rest of the event. The map is based on Seer’s homeworld, Boreas, and features a sandy environment with a concert venue on one side and a VIP lounge on the other. The map has plenty of buildings on it but almost no points of high elevation, so players will have to take each other head-on.

The limited-time mode Shadow Royale makes its return during the Monsters Within event but only for the final week of the event. In the mode, players who die return as a shadow that is able to use melee attacks against enemies. The shadows have unlimited lives and can assist their living squadmates. Squads aren’t eliminated until all members become shadows. 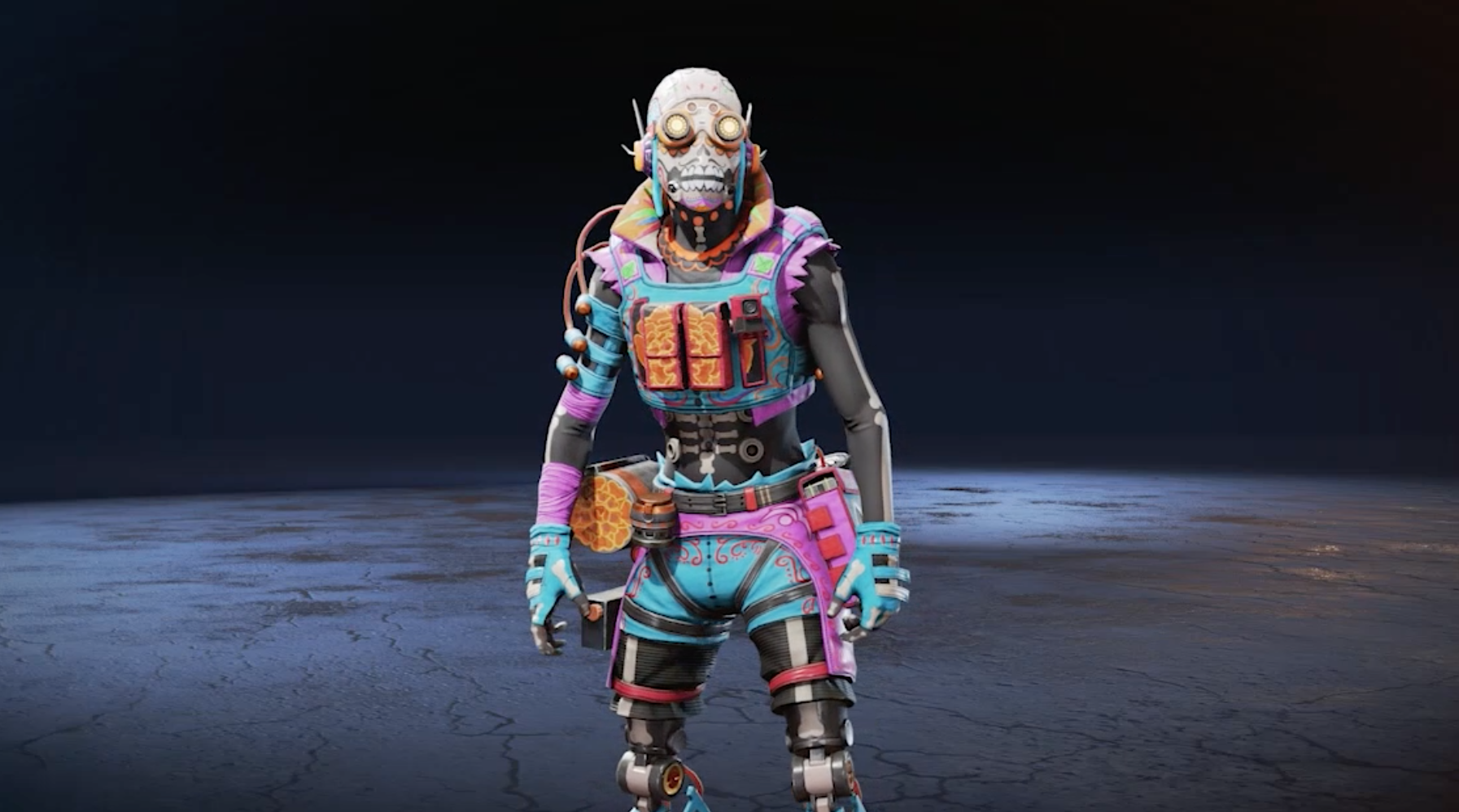 Older bundles will also be available during this time, including the Loba Banshee bundle, Darkside Gibraltar bundle, and the Bangalore Soldado de la Muerte bundle. There will also be a full collection Dia de Los Muertos bundle that includes all of the other items and an additional 15 Apex Packs. Respawn has not announced pricing for these bundles yet.