Save $60 on Two Pack of the Ripper Snow Helmet Audio System!

Ready to make the step up from your smartphone or point-and-shoot to something a bit more powerful? These are the best beginner DSLRs you can buy right now in 2019.

An entry-level, beginner DSLR is the natural progression when you feel like you've outgrown your point-and-shoot compact camera or are no longer satisfied with the snaps you get from your smartphone.

If that's that case, you've come to the right place to find out what the best entry-level DSLR is to help you take your photography to the next level.

DSLRs for beginners deliver a big step up in image quality over a compact camera or smartphone. They may share the same number of megapixels, but the size of an entry-level DSLR's sensor is physically much larger in most cases, which allows for superior results with more detail and better low-light performance.

That's not forgetting that entry-level DSLRs offer far more manual control than smartphones and compacts, together with the ability to change lenses to tackle a huge variety of projects. Don't worry though – there are also a host of auto modes to help you out until you're comfortable with the more creative controls that a DSLR offers.

Obviously, the more features you want on your entry-level DSLR, the more you'll pay – but do you actually need them? Our top camera is one of the cheapest on the market, but it still offers impressive performance and image quality, plus enough features to handle most photographic assignments, especially if you're still learning.

You may also want to consider a mirrorless camera as an alternative. If so, you'll find our video above or Mirrorless vs DSLR cameras: 10 key differences guide very useful. Or, if you're not sure what kind of camera you need at all, then read our easy-to-follow guide to camera types: What camera should I buy?

Should you buy a mirrorless camera over a DSLR? Watch our guide video below to learn more:

If you're buying your first DSLR, it makes sense to buy it as a kit, which generally includes the camera body along with an 18-55mm lens. Often referred to as a 'kit' lens, this covers a pretty broad zoom range, perfect for everything from landscapes to portraits – but that's just the start.

A word of warning, though. Look closely and manufacturers will often offer two types of kit lens, one with image stabilization and one without. Normally there's not much difference in price, so make sure to go for the kit with the image-stabilized lens as it'll make it easier to sharper images at slower shutter speeds.

These kinds of lenses are more than adequate to get you started, but the key advantage of DSLRs over compact cameras is that you can add to your kit with additional lenses. For example, wide-angle and telephoto zoom lenses, as well as high-quality macro options. You can also add a flashgun and other accessories, which help you to make the most of whatever types of photography you're into.

Before we take a look at the best DSLRs for beginners, we wanted to highlight a great mirrorless alternative. The Olympus OM-D E-M10 Mark III is styled like a DSLR, with a viewfinder mounted on the top, but this camera is so small it scarcely takes up more space than mirrorless cameras with no viewfinder at all. It has a Micro Four Thirds sensor that's a little smaller than the APS-C sensors used by DSLRs, and 16 megapixels rather than the usual 24, but the smaller sensor means smaller lenses. It's also uncommon to find DSLRs at this level offer 4K video, 8.6fps burst shooting and sensor-based stabilisation – in fact, no DSLR at this level offers all this right now, which makes the OM-D E-M10 Mark III a very viable alternative to the options below if you're happy to go mirrorless.

Best DSLRs for beginners in 2019

You don't need to spend huge sums on a DSLR to get something that handles well, takes great images and works with a huge variety of lenses. In fact, you can often save yourself a fair chunk of cash if you're happy to go for a slightly older model. Manufacturers often keep these available as newer DSLRs arrive to give users a choice between the very latest tech and a better-value option. Here, we've listed the best cheap DSLRs, from recent arrivals to older favourites.

The D3500 picks up from where the D3400 (below) left off, and it arrives with a handful of extra perks. The battery now lasts for 1,550 images between charges, which is way ahead of most other DSLRs, while the new 24MP sensor delivers excellent image quality. Nikon also revised the body and control layout, not only to make it nicer to handle but easier to use, while the Guide Mode takes the first-time user's hand and walks them through all the key features in a way that makes everything easy to understand. We love it – and we reckon you will too.

It may have been replaced by the D3500, but don't discount the D3400. Sporting a range of features perfect for the novice user, this is still a great camera to get started on the road to more creative photography. Sharing many of the same internal specs as the D3500, the battery life is brilliant, while the images from the 24MP sensor won't disappoint. You also benefit from Full HD video to 60p and 5fps burst shooting, together with wireless connectively (via Bluetooth) to get your shots out into the wider world without the hassle of cables. Don't let the fact that it's not the newest model of its sort put you off – there's still lots to love here.

The EOS Rebel T7i (known as the EOS 800D outside) sits at the top of Canon's entry-level EOS DSLR range. Sporting a 24.2MP sensor that delivers an improved high ISO performance over older models, the Rebel T7i's autofocus also gets a boost, now with a 45-point arrangement that's backed up by excellent live view AF system. There's also newly designed graphical interface that will certainly make this camera even more appealing to new users, but the absence of 4K video and the quality of the exterior materials disappoint. Perhaps one of the more expensive options out there for the first-time user – but definitely one of the best.

The D5600 is a step up from the D3xxx-series models, with a stronger set of specs to rival the likes of the Canon EOS Rebel T7i / EOS 800D. Key advantages over the D3400 and D3500 include a larger LCD screen, which not only flips out and swivels but also responds to touch, together with a more advanced autofocus system, Wi-Fi and a healthy range of additional control on the inside. Sure, you pay a little extra for the privilege, but if you need a little more growing space it makes more sense to go for the D5600 so that it stays with you for years to come.

The EOS Rebel T6i (called the EOS 750D outside the US) may have been replaced by the EOS Rebel T7i / 800D, but it's still a great option if the price of the newer model puts you off. While the sensor isn't quite as good as the one in the newer T7i – despite sharing the same resolution – it's still very good, while the vari-angle touchscreen is still one of the best around. AF performance could be better though, and the camera isn't quite new enough to benefit from the more up-to-date Dual Pixel CMOS AF system that makes focusing swift in live view and during videos, but overall this is still a very capable entry-level DSLR.

The D5300 was around for little more than a year before the D5500 technically replaced it (which has in turn be replaced by the D5600). It shares the same 24.2MP sensor with an identical maximum ISO25,600 sensitivity as the D5500, whilst the D5300's EXPEED 4 image processor and 39-point autofocus system have also been carried over to its replacement. The D5300 doesn't sport fancy touchscreen control, you do get GPS instead, while the D5300's 600-shot battery life isn't class leading but still far better than many mirrorless cameras. All in all, it may not be the latest entry-level DSLR, but the D5300 is still a smart buy. 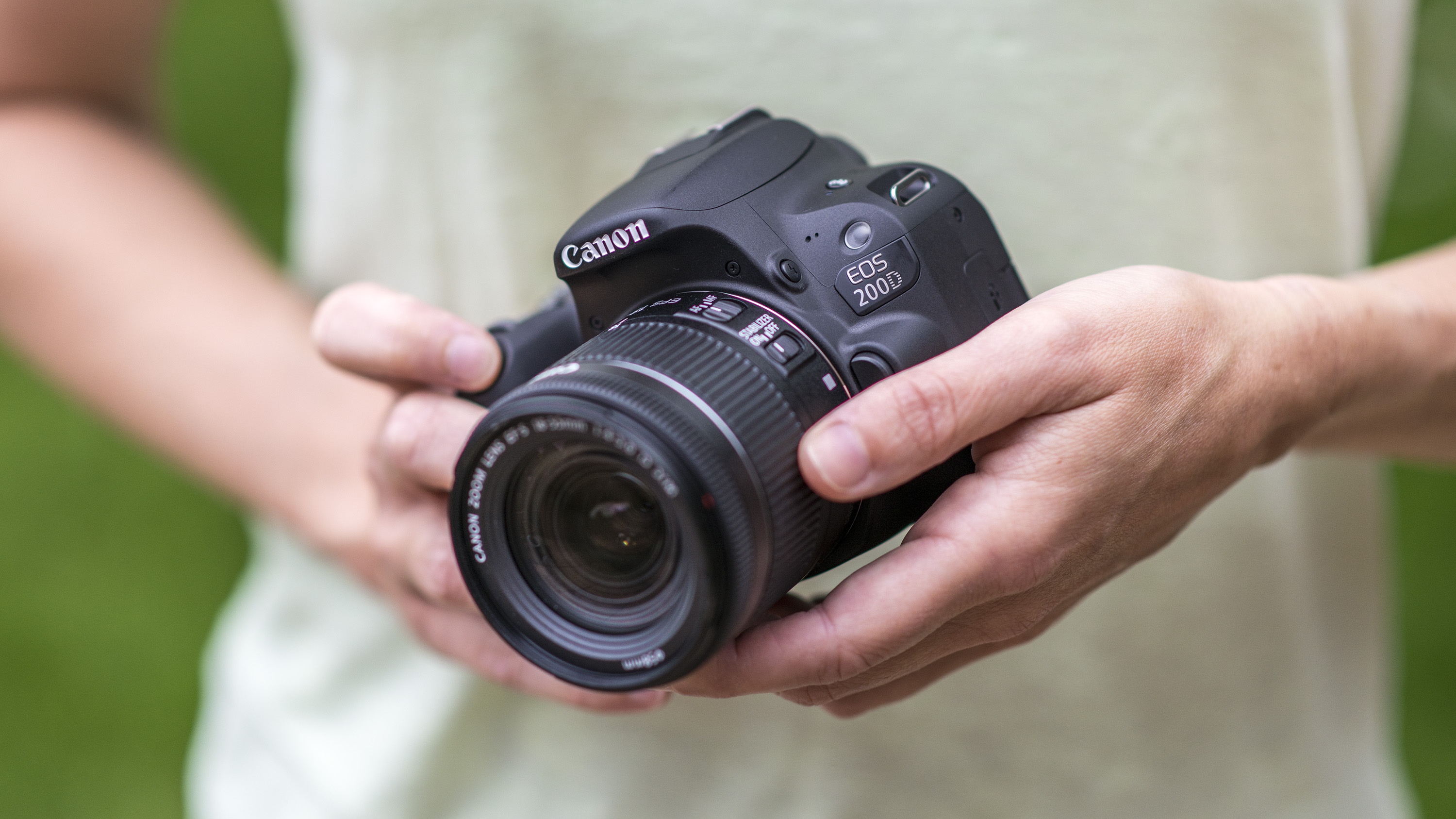 Canon introduced the EOS Rebel SL1 (EOS 100D outside the US) to compete with the influx of mirrorless cameras and it was the smallest DSLR available when it was introduced in March 2013. Now replaced by the EOS Rebel SL2 (EOS 200D), its slightly bulkier proportions make it feel more like a slightly pared-down Rebel T7i / 800D than anything unique. It's not a bad option for new users, but there are better-value alternatives available at the moment. The camera has recently been updated by the EOS Rebel SL3 / EOS 250D, which has the added bonus of 4K video recording and better battery life, but the EOS Rebel SL2 is a better option if you're looking to save money and you're happy with Full HD video quality. 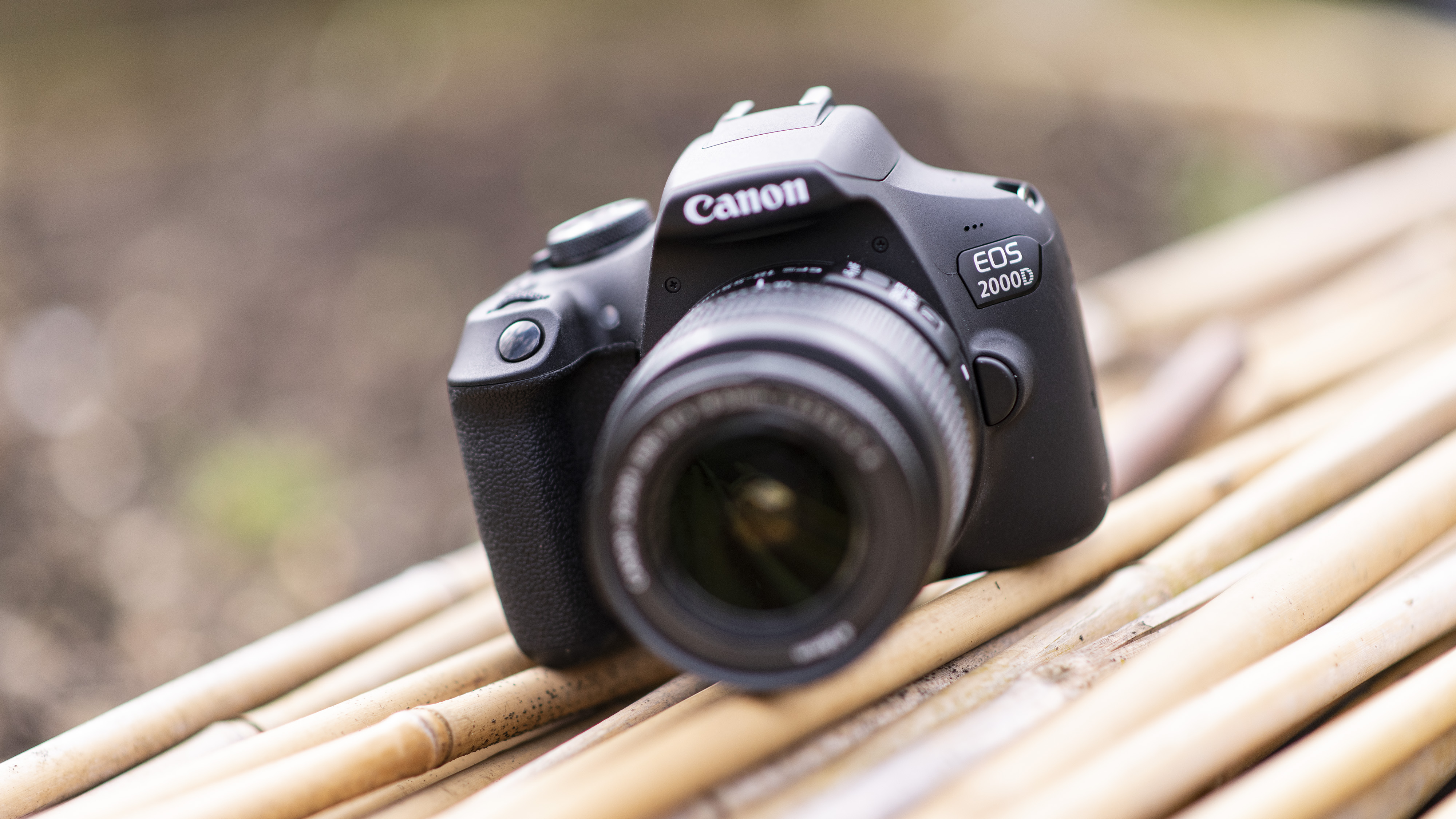 This is one of the cheapest DSLRs in Canon's current line-up, which also makes it a very cost-effective way to get access to an endless assortment of lenses, flashguns and other accessories. Its low price tag means that it understandably lacks some of the fancy tricks of its bigger brothers, but there's still a very good level of physical control on offer – and, most importantly, image quality from the 24MP sensor is sound. It's designed with its target audience in mind, with a Feature Guide to help you understand everything, and battery life is also better than many mirrorless models at this price point – still a key advantage of DSLRs. Wi-Fi, NFC and Full HD video recording round off the specs, making it a well-rounded first-time option.

Not everyone needs the very latest tech, and the D3300 is a perfect example of an older model that still delivers everything the novice user needs to take excellent images. The 24.2MP APS-C sensor has no low-pass filter over it, which helps it to capture more detail than would otherwise be the case, while Full HD video recording works to 50/60p. You can also shoot at a very respectable 5 frames per second, while the kit lens has a collapsible construction to keep it nice and compact when you're carrying it around. Having been replaced by both the D3400 and D3500, it's also dropped to a lower price point, making it one of those rare models that's manages to be capable and super cheap at the same time. 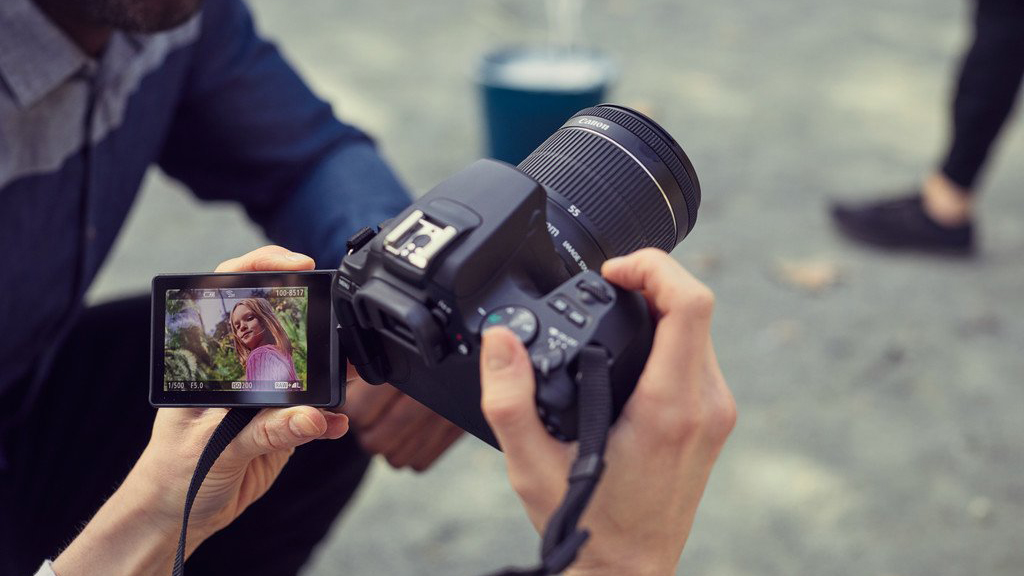 The latest camera to make our list, the EOS Rebel SL3, also known as the EOS 250D, is described by its manufacturer as being the smallest and cheapest DSLR with a movable LCD screen. It also happens to be the cheapest DSLR to pack 4K video, which is boosted by the inclusion of a port for external mics. Other niceties include Canon's excellent Dual Pixel CMOS AF system, a responsive touchscreen and compatibility with lots of great lenses. It's a shame Canon has maintained the same 9-point AF system from the previous EOS Rebel SL2 as it's looking rather dated now, but as an all-rounder for a sensible price the Rebel SL3 scores many points.

None of the above take your fancy? Here's another option to consider. 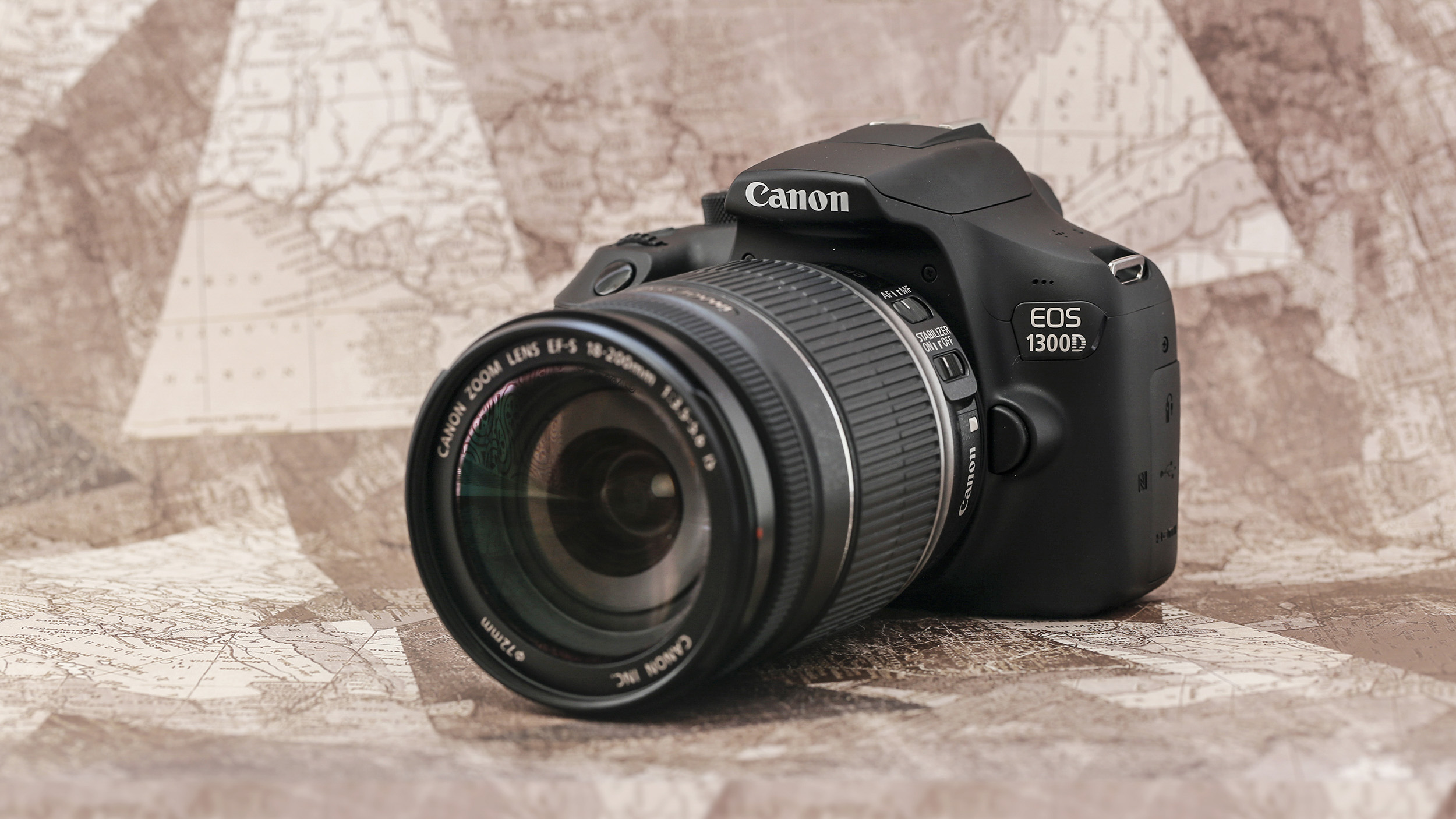 It may have been replaced by the EOS Rebel T7 / EOS 2000D (above), but that does mean that the EOS Rebel T6 (known as the EOS 1300D outside the US) is now even cheaper. In many ways the specification is very similar to the newer camera, with the key difference being the Rebel T6 features a 18MP sensor, which compared to rivals, is starting to show its age against rivals with higher pixel counts. Now that it's been replaced, you might be able to track this down at an even more tempting price before it disappears for good.