Call Of Duty’s Season 4 Reloaded Arrives This Week, Here’s All The Details

Call of Duty’s mid-season Reloaded update arrives on July 15, dropping a new map and mode themed around paintball for Black Ops Cold War‘s multiplayer, a new round-based map will arrive for Zombies, and Warzone is getting an objective-based mode. 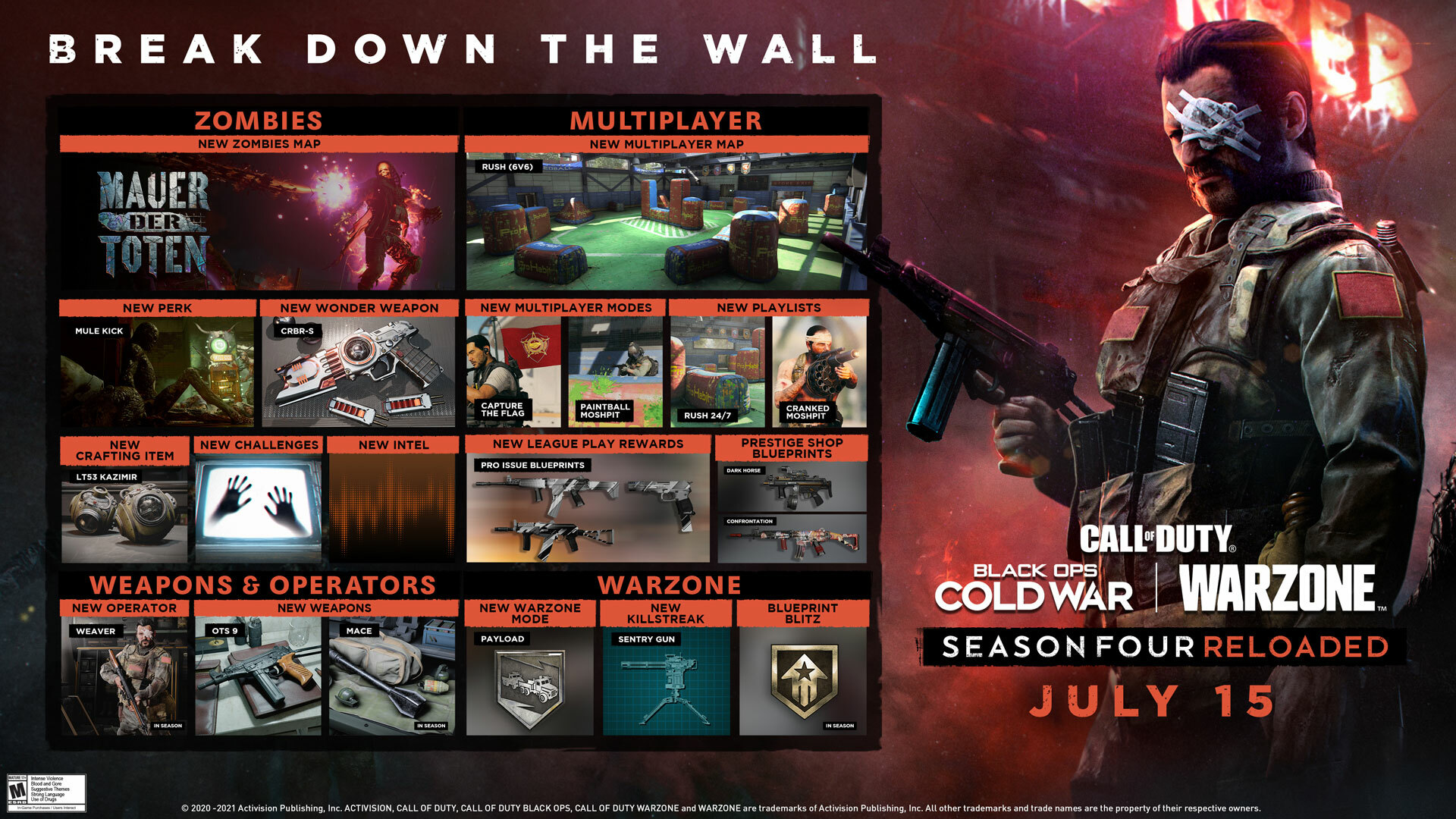 Season 4 Reloaded brings Call of Duty’s classic Capture the Flag mode, where teams must take their enemy’s flag and return it to their home base, while also defending theirs from the enemy team. The update also brings a remastered version of Rush from Black Ops 2. Rush is a small 6v6 map themed around a paintball course.

And speaking of paintball, Treyarch teases a new paintball experience is coming later in the season with Paintball Moshpit. This is described as a new way to play multiplayer with paintball visual effects and impact sounds. 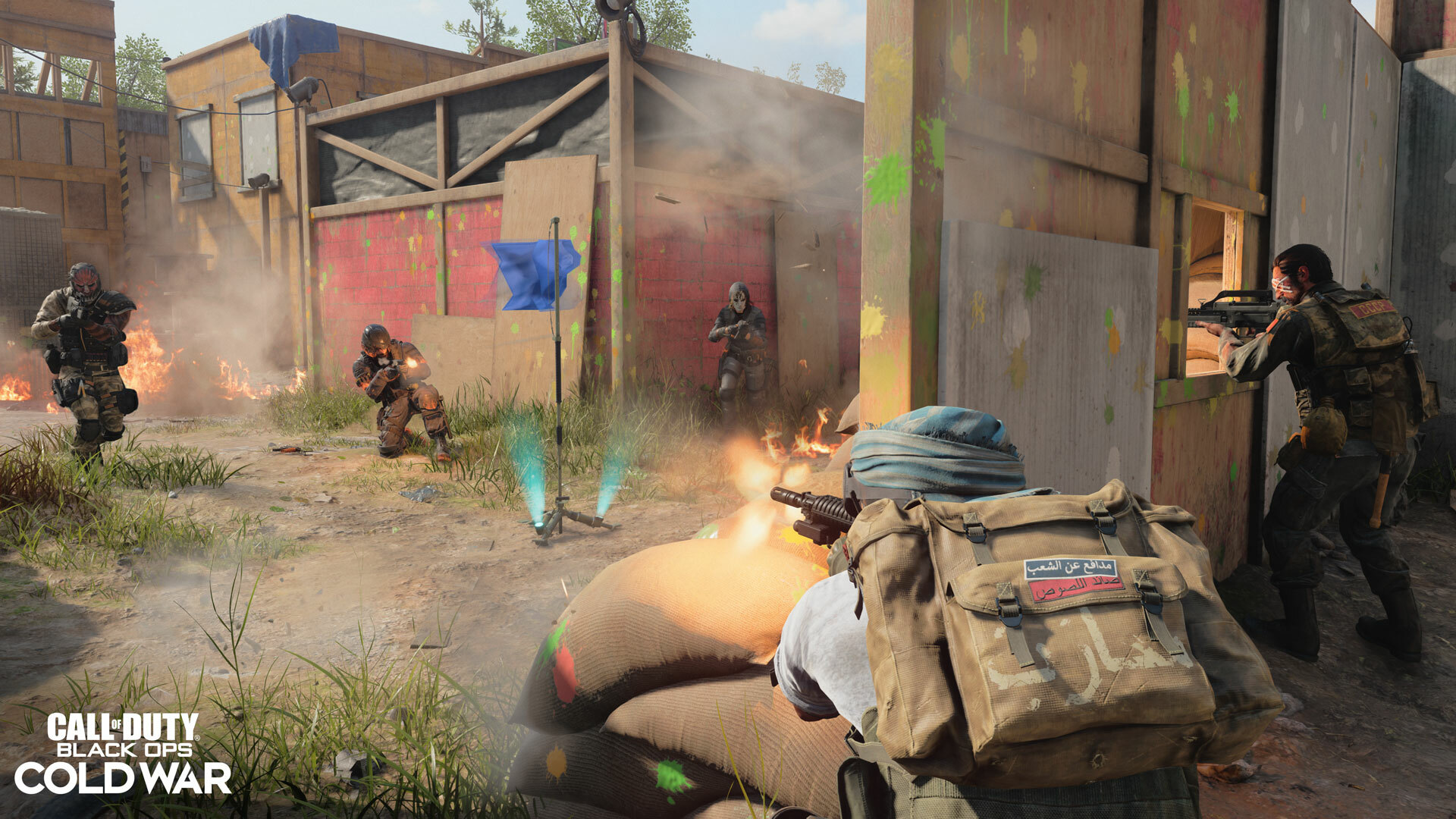 Also coming at the mid-season launch is a Rush 24/7 playlist for the new map, in addition to new Cranked modes. There will be a Cranked Moshpit with new Cranked Team Deathmatch and Cranked Kill Confirmed, which will be similar to Cranked Hardpoint from the ’80s Action Heroes event.

Two new weapons are scheduled for Season 4 Reloaded. The OTs 9 Submachine gun will arrive at launch, which is a fully-auto submachine gun that can either be unlocked either through an in-game challenge or by purchasing one of its weapon blueprints bundles. And finally, the Mace melee weapon will be available later this season either by unlocking with an in-game challenge, or purchasing one of its weapon blueprints in the store.

The wait for a new round-based map is almost over. Season 4 Reloaded will introduce Mauer der Toten, which translates to Wall of The Dead, serving as the third round-based Zombies map for Black Ops Cold War. The map is set in 1985 East Berlin after a zombie invasion devastated the city, and players will be navigating through dark streets and subway tunnels.

Mauer der Toten will introduce a new CRBR-S Wonder Weapon, which starts off as an energy-based pistol, but it can be upgraded to three additional variants. There’s also a new craftable LT53 Kazimir grenade, which is similar to the Gersh Device from Black Ops 1.

The new map will also introduce a robot soldier named Klaus, who can assist players with slaying the undead. It’s quite possible that Klaus and the new Wonder Weapon will all be a part of the map’s new storyline quest. And Mauer der Toten’s questline hunt will begin at 10 AM PT / 1 PM ET Thursday, July 15.

Zombies is also getting a new Dynamic Wall Buys feature coming to all round-based Zombies maps in Season 4 Reloaded. This feature will give Wall Buy weapons a chance to increase in rarity at the end of every fifth round, and increase all the way up to Legendary rarity.

Activision continues to tease the mysterious Red Doors by saying: All Operators should report to Verdansk to either escort or halt important Payloads crossing the region, taking note of any additional Red Doors they may see after this update…

This could be leading into a new Easter egg quest for Warzone, and it could possibly be tied to an in-game reveal for the upcoming Call of Duty title.

Warzone’s mid-season update will also introduce a new objective-based mode, Payload. Activision says the mode is inspired by previous traditional Call of Duty game modes like Call of Duty: WWII’s War Mode. Payload pits two teams of 20 players against each other in a race that requires the attacking and defending of vehicles carrying vital satellite parts. 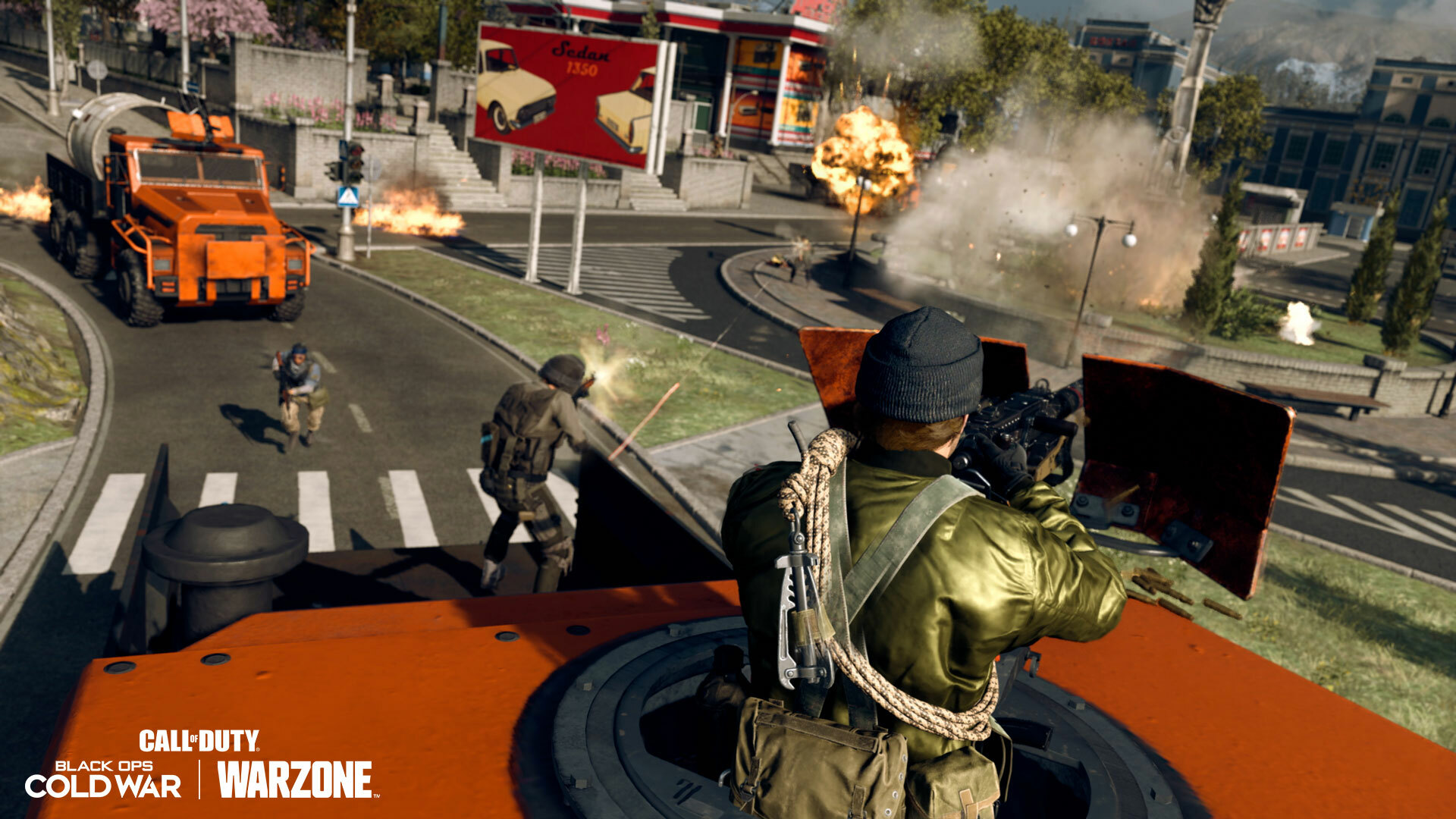 If the attacking team escorts all vehicles across all checkpoints within the time limit, they win the match. The defending team can use resources to help them fight off the attackers by buying and building obstacles to stall these vehicles. Players will also have their own custom loadouts, and they will be able to still earn cash and buy killstreaks just like normal matches.

The sentry gun from multiplayer is also being added to Warzone’s arsenal of killstreaks. The Sentry Gun can be found as a rare Legendary item drop within a Red Door room Supply Box.

There’s also a new event coming later in Season 4 Reloaded. Blueprint Blitz will be a new global event where Contraband Contracts automatically spawn after a player completes two regular Contracts. Contraband Contracts will award players with cash and a permanent weapon blueprint reward if they’re able to extract it. Blueprint Blitz will give players the opportunity to earn plenty of blueprints from prior seasons if they missed out or didn’t play Warzone during that time.

The Reloaded update will also add new cosmetic weapon bundles and another Operator for use in both Black Ops Cold War and Warzone. Grigori Weaver, who currently offers guidance in the Zombies mode, is arriving as a playable Operator. He can be purchased in the Tracer Pack: Weaver Operator Bundle at the start of Season 4 Reloaded. More details can be found on the Call of Duty blog.

In addition to all the new content for the mid-season update, Call of Duty: Black Ops Cold War will have a Free Access period from July 22 to July 29. This free access will feature various multiplayer and Zombies experiences, including Rush playlists and the entirety of Mauer Der Toten.