Cyberpunk 2077 And The Witcher 3’s PS5 And Xbox Series X|S Editions Still On Track For 2021, But Could Slip

Plenty of big 2021 games have been delayed to 2022 due in part to the pandemic, but CD Projekt Red said on Wednesday that the bespoke PlayStation 5 and Xbox Series X|S versions of Cyberpunk 2077 and The Witcher 3: Wild Hunt remain on track for release this year. That being said, the studio left open some wiggle room and acknowledged that, while the plan is to release the games this year, the developer could not guarantee it.

In the company’s latest earnings report, CD Projekt Red said Cyberpunk 2077’s “target date” for next-gen is “late 2021.” As for The Witcher, the Polish studio gave the same date, along with the same description that this is a “target” as opposed to a date that is set in stone.

“The target is to release the next-gen version of Cyberpunk 2077 late this year,” he said, as reported by VGC. “At the same time, keeping in mind the lessons we have learned during the past year and taking into account that this project still remains in development, we can’t say with full certainty that the production schedule will not change.”

The Witcher 3’s next-gen edition is developed by Saber Interactive, and the plan is to launch the game in 2021, but it might also be delayed.

“As with Cyberpunk 2077, our goal is to release that game still in late 2021. However, similarly, the development process is ongoing, and we cannot be absolutely dead certain that the release schedule will not change,” Nowakowski said. “But for the time being, we definitely are aiming with both titles for late 2021 and I don’t want to be more specific at this moment in time.”

Cyberpunk 2077’s bespoke PS5/Xbox Series X|S edition will take advantage of the additional horsepower of those systems to make the game look and run better. The same is true for The Witcher 3, which will also come with all previously released expansions, as well as new content inspired by Netflix’s popular Witcher TV show.

Both games will be free for people who already purchased Cyberpunk 2077 or The Witcher 3: Wild Hunt.

As part of CD Projekt Red’s financial briefing, the company also announced that it is now gradually moving developers of Cyberpunk 2077 onto other projects. As you can see in the image below, the proportion of developers working on Cyberpunk 2077 and its next-gen edition has decreased compared to six months ago. It appears the biggest redirection of staff went into Cyberpunk 2077’s first expansion and “other projects.” 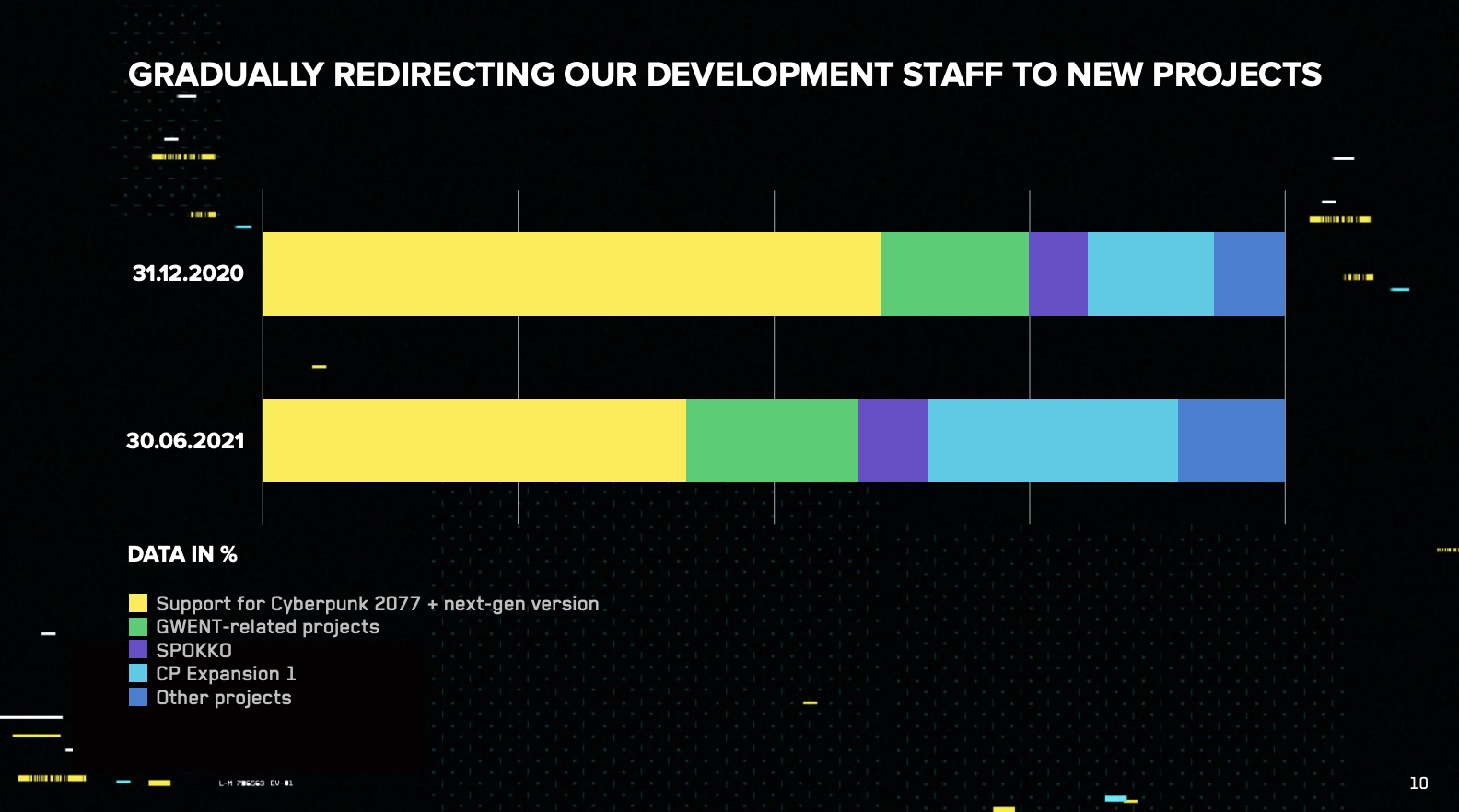 In other news, CD Projekt Red has hired members of the Cyberpunk 2077 modding community to help improve the game going forward.

« Not Legal Advice… America: The world’s most creative junkie » How fast is Earth moving?