Destiny 2’s Story Has Never Been This Good

Saint-14 is one of Destiny‘s greatest heroes. Unlike the powerful figures who rose in the game’s distant history with the power of the Light, granted immortality but not guidance for how to use it, the “Risen” known as Saint-14 never became a tyrannical warlord who sought his own power. Instead, he was always a protector of the rest of humanity, wandering the post-apocalyptic wilds to save humans from the many alien threats on Earth that sought to destroy them. Saint-14 is beloved by children and animals–a big, cuddly, Russian bear of a guy.

He is also a rampaging, bloodthirsty monster, from a certain point of view.

We got that point of view in the latest weekly story quest in Destiny 2‘s Season of the Splicer. A quick catch-up: the robotic Vex have done some kind of weird computer simulation shenanigans, and that has blanketed the Last City, where most humans and Guardians live, in an “endless night.” That night is sapping electrical power, spreading sickness, and straining the City’s resources. The Guardian leadership known as the Vanguard has recruited the help of the House of Light–a friendly group of Eliksni aliens, the species otherwise known as the Fallen throughout the game–to help deal with the Vex threat. In exchange, those Eliksni have been allowed refuge in the Last City. 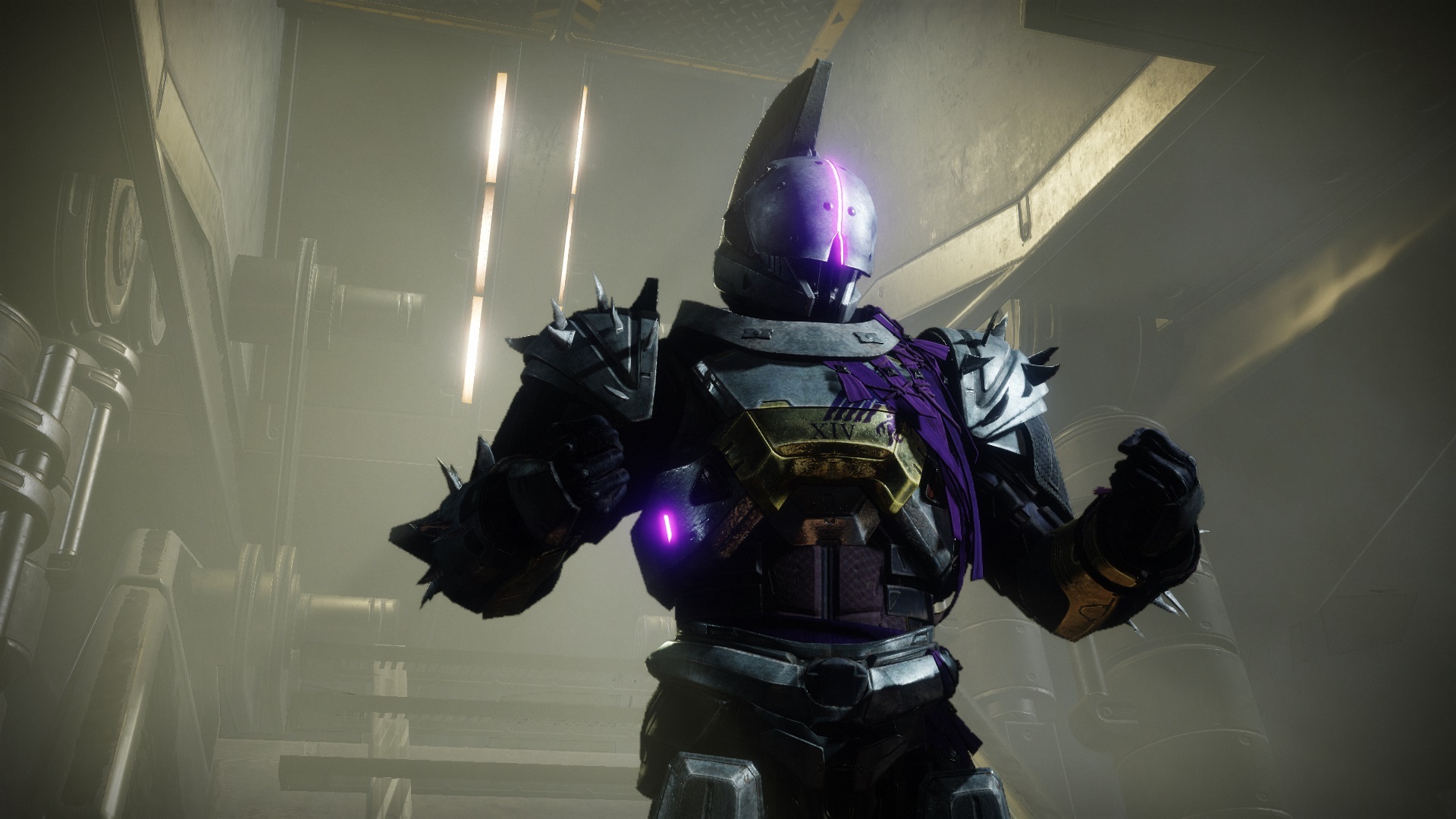 The Eliksni, a race who’ve become scavengers, pirates, and bandits since they’ve arrived in our solar system, have been the enemies of humanity for hundreds of years. Now there are some living in the Last City, humanity’s only bastion of safety. That’s creating a lot of tension on both sides. Some City leadership wants the Eliksni to leave, and this week, the Eliskni Quarter in the City was vandalized. Saint-14, who has been assigned to work with the Eliksni, shook off the event by saying that people can have a hard time living beside their monsters.

Mithrax, the leader of the House of Light, countered with an incredible tale of a monster of Eliksni legend. An unstoppable, unkillable creature that pursued their people with murderous rage, even when they fled–even when they were innocent. Ripping through whole Eliksni families, whole Eliksni houses, this creature was so fearsome that it never left survivors. Eliksni told stories to their children about it. It’s now ingrained in their culture.

That monster, Mithrax says, called itself “the Saint.”

“If we wish to survive we must all learn to live alongside our monsters.”
The Saint – A Bedtime Story pic.twitter.com/L7PniVF8UD

It’s a phenomenal story moment in Destiny 2. Characters in the game are talking to each other about each other in a way that’s never really happened before. With the Eliksni in the City, we’re getting a new viewpoint on a looming figure in Destiny lore. Last year, we spent a whole season using time travel to undo Saint-14’s death. We, the players, literally rescued him from his fate, resurrecting a hero who had passed into legend. And now we’re getting a different perspective on one of humanity’s storied saviors.

The story in Destiny 2 has never been this good. This year, in particular, has been marked by moments like this–uneasy alliances, conversations between adversaries, and new views on things we thought we knew. There are Eliksni living in humanity’s City right now, trying to carve out a life with their former enemies, working together with them. For context, the very first thing that happens in the original Destiny, moments after you’re resurrected as a Guardian for the first time, is a pitched battle between you and the Fallen. First, you run from them. Then you kill a bunch of them. In the first five minutes of that game. The Fallen were Destiny’s very first monsters.

What we’ve seen in the seasons beginning with the Beyond Light expansion is an evolution in Destiny 2 storytelling that has elevated the game in a way we’ve never seen before. Characters are questioning their ideologies loudly, frequently, and most importantly, in the game. For literally years, most of Destiny 2’s best story was relegated to text passages connected to armor and lore delivered online through Grimoire Cards. Now, we’ve got people like Saint-14 and Mithrax challenging each other in conversations we’re watching, in radio dialogue delivered during and at the end of missions and activities, and in awesome, animated cutscenes.

It all really kicked off with the inclusion of Crow in the Season of the Hunt, back when Beyond Light was released. This new character was the culmination of a storyline begun in the Forsaken expansion–Crow is now a Guardian and can’t remember any of his past life before he was resurrected as one of the superhero characters that players embody in the game. But before he was a Light-bearer, Crow was Uldren Sov, the man who killed beloved Guardian Cayde-6. Crow doesn’t remember any of that; he is, in fact, a different person now, thanks to his resurrection. But Bungie built on and addressed all that baggage, and it did so within the game, not in some buried lore card only seen by players who would go looking for it. 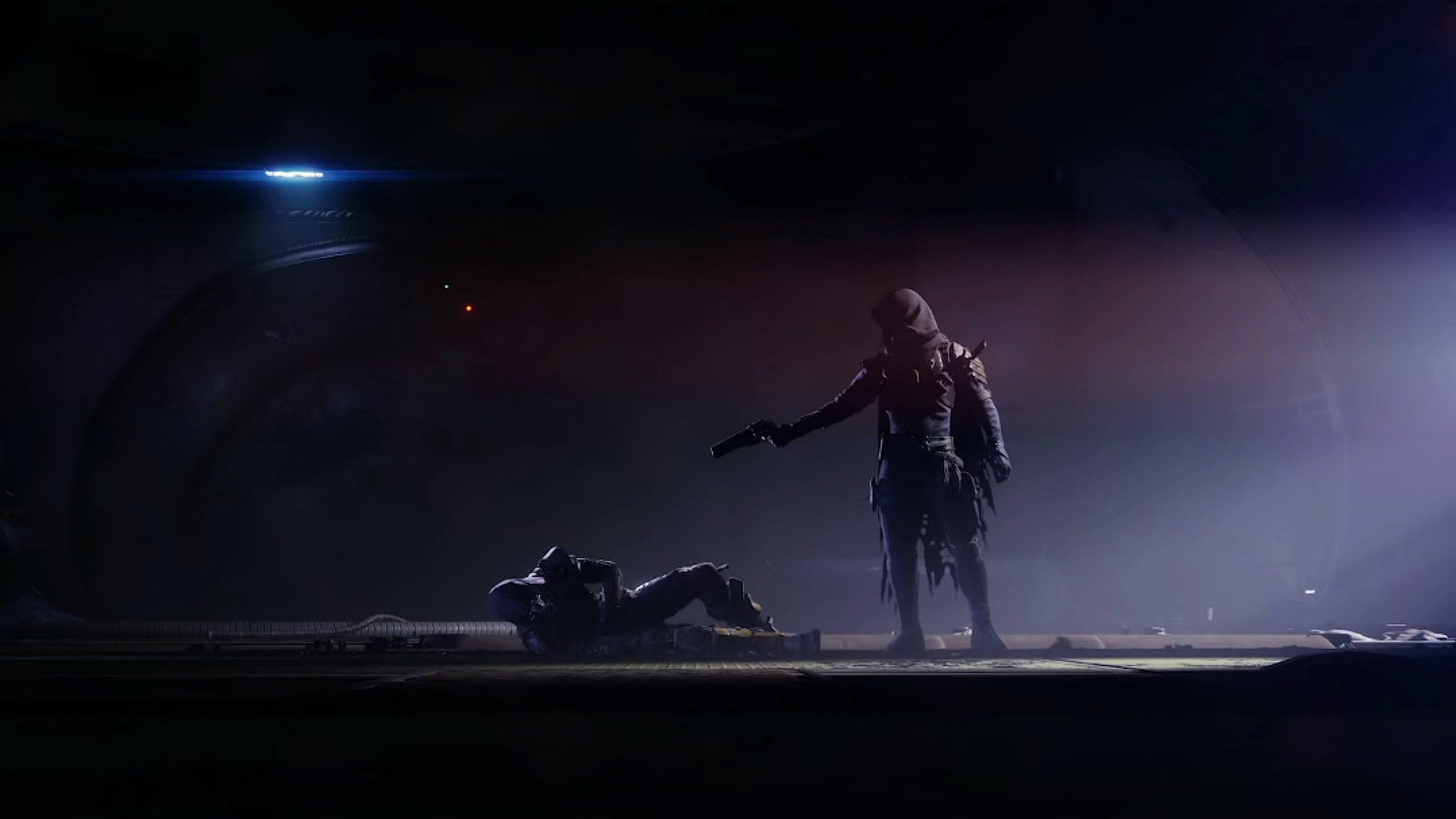 Crow has brought a different perspective to the game that’s shaking up Destiny 2 all over the place. He spent time with the Eliksni before he came to the City, so he’s much more disposed to the idea of peace and understanding between the two species. He brought the same perspective to the season before this one, the Season of the Chosen, which saw tenuous discussions of treaties and alliances between humanity and the Cabal. There’s a lot of baggage there, too–the Cabal, as a conquering empire, sacked the Last City during the vanilla campaign of Destiny 2. They murdered a whole lot of people when they did that, including a key in-game character, the human leader called the Speaker. A bunch of the characters in Destiny 2, like famed pilot and shipwright Amanda Holiday, express a lot of resentment toward the Cabal.

But in-game, we’ve seen Crow’s perspective of wanting to find common ground with the “enemies of humanity” affecting other characters. We’re getting dialogue that suggests, because of Crow, Amanda has come around to the idea of trying to understand and find peace with the Cabal, despite what they’ve done, and the Eliksni, despite what they’ve done. We’re seeing ideological debates within the game. We’re seeing characters we’ve known for years grow and change.

At the same time, we’re seeing interpersonal conflicts brewing and politicking coming to the forefront of the Last City, two things that have barely been included in Destiny 2 up to now, outside of its deep (and often really, really interesting and well-written) lore. In the Season of the Chosen, we spent a bunch of time with Lord Saladin, the guy who usually just runs the Iron Banner PvP event. As the ground commander working against the Cabal, we heard a lot from Saladin about offering the enemy no quarter, about the possibility of waging total war against them. Saladin clashed with both Crow and Zavala, the Vanguard commander–and honestly, Saladin’s unyielding, hawkish viewpoint provided a lot of new nuance and depth to his character, and not all of it painted him in a positive light.

In the current season, the long-absent Lakshmi-2, the leader of one of the factions meant to represent the civilian population of the City, has had a big role. She’s the voice that wants the Eliksni out of the City, and she’s racist as hell in delivering that message. Each week, Lakshmi makes new broadcasts out to the City’s populace, using demagoguery to whip up support for expelling Mithrax and his people. She’s sewing dissent against the Vanguard leadership. She’s using the situation to advance her own power. It’s something we’ve never really seen in Destiny before, and it’s adding a lot of depth to the events of the game week-to-week. 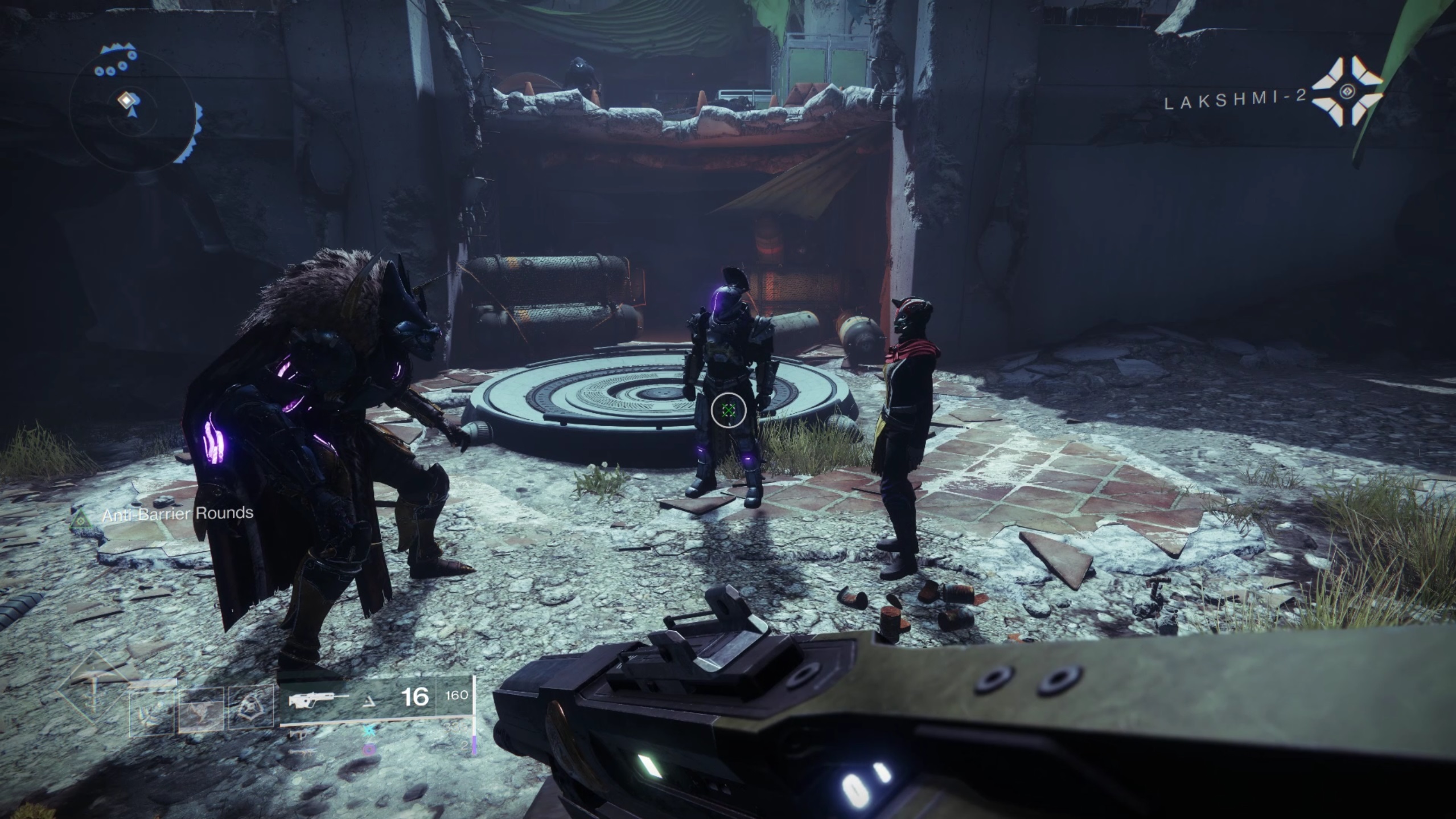 Even on a larger scale, ever since Beyond Light introduced the ability for players to wield Stasis, a power otherwise known as “Darkness” in the game, Destiny 2 has become more nuanced than ever before. For years, the moral and ideological calculus of Destiny was: “Light equals good; Darkness equals bad.” That necessarily led to us, the players, being good, since we “serve the Light,” and all other aliens we face being bad. Now we’re using Darkness to do good, and a lot of characters are having a very difficult time reconciling that situation. There’s a real fear that using Dark power could corrupt Guardians along the way. But even if it doesn’t, the game is repeatedly bringing up a singular question: we can use the weapons of the enemy to do good, so what else are we wrong about?

And finally, there’s the flow of seasonal story arcs. Since the release of the Shadowkeep expansion, Bungie has been working to tell seasonal stories that bleed into and set up one another to make one year-long narrative that then flows into the next big expansion. Last year’s stories did an okay job of this, but they still felt fairly disjointed from one another. Since Beyond Light, the approach has worked much better.

What is related, though, are the themes of those episodes–and how they’re affecting the people involved. As mentioned, we’re seeing ideological differences emerging between people that were previously unabashedly considered heroes. We’re seeing questions arising about how we treat characters who have been our enemies and whether all we’ll ever know with these other peoples is endless war. And we’re seeing characters changing over time. The thing that’s continuous between all the seasons this year isn’t necessarily one long, flowing story of cause and effect–it’s a thematic story in which we’re seeing how these discreet episodes are causing characters to change. 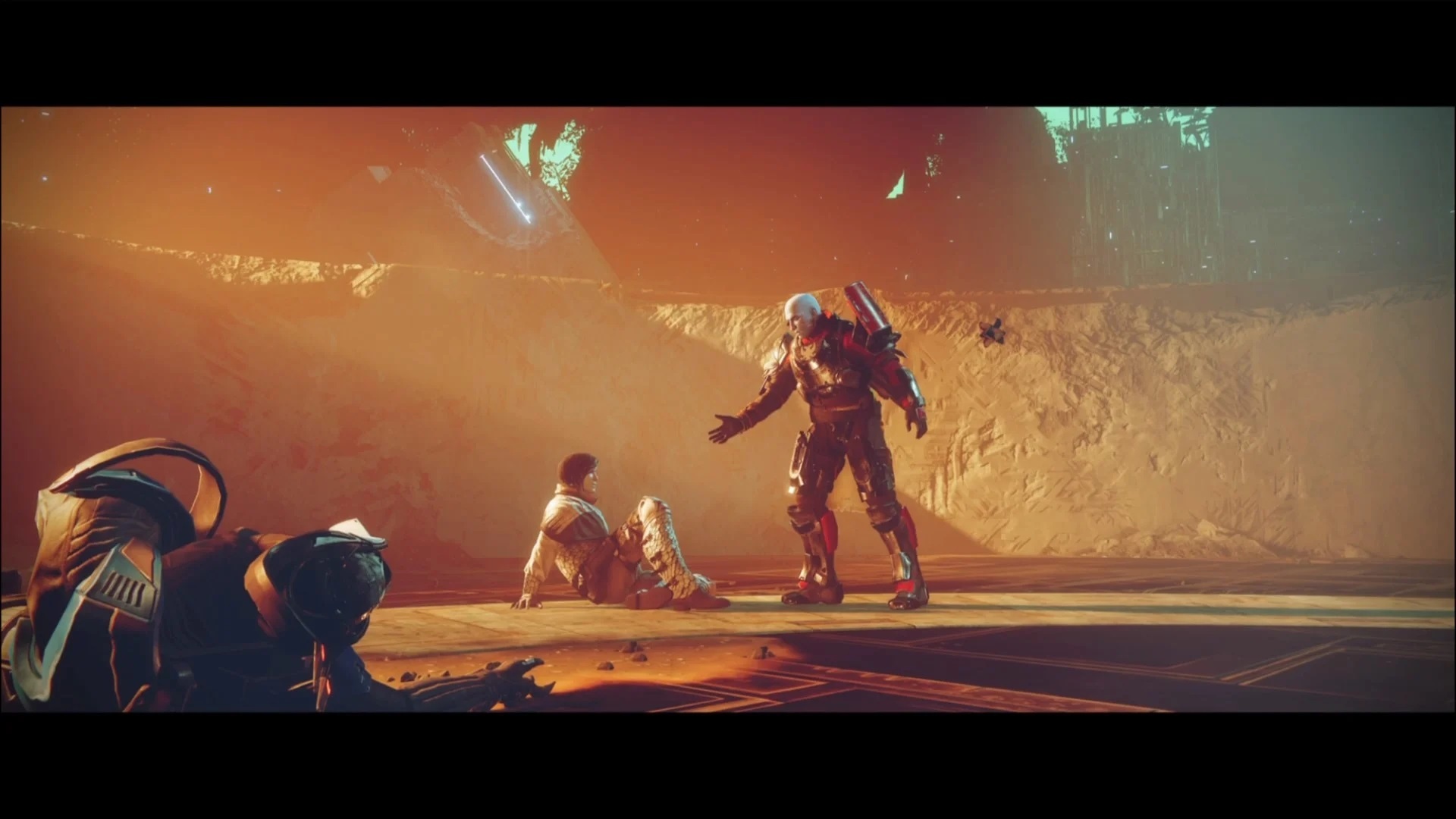 Suddenly, abruptly, Destiny 2 is full of characters with arcs, agendas, ideas, conflicts, and internal struggles. Big-hearted Saint-14 is confronted by the idea that he is an element of nightmares. Scheming Lakshmi-2 is fomenting a potential coup against the Vanguard leadership. Stalwart Zavala is starting to see pathways to peace where before there was only war. Unyielding Saladin is wondering if the Vanguard has lost the will to do what needs to be done to protect humanity. Earnest Crow is hoping people can offer forgiveness, for their alien enemies as well as for him.

This is, and I cannot stress this enough, happening in the game. The story isn’t being delivered only in monologues when you go turn in a quest. It’s not hiding only on a lore card for a pair of shoes you pick up off some random enemy. It’s scenes and dialogue that are happening all the time between characters as you play. And the story is still deep, fascinating, and affecting, even if you never dive deeper than the scenes that happen to advance the plot each week–and if you do, it’s even more well-realized.

In no uncertain terms, I’ve been waiting for Destiny 2 to deliver us this story in this way since I first started playing in Destiny’s original beta period. I’ve been a fan of Destiny lore for a long time, especially when it really ramped up with intrigue and mysteries in Forsaken. But my big issue has always been that Destiny 2 has been bad about making its stories feel like an immediate part of the game. That situation has completely changed. Destiny 2’s story has never been better, and I can’t wait to jump in every week to see where it’s headed next.