Hitman Sniper: The Shadows Announced, And You Don’t Play As Agent 47

Mobile players will soon be able to dive into a new Hitman adventure, as Square Enix Montreal announced Hitman Sniper: The Shadows for iOS/Android devices during the E3 2021 Square Enix Presents livestream. The game is slated for release later this year.

The Shadows follows 2015’s Hitman Sniper, utilizing its unique environment-based sniper gameplay. The brief trailer shows off a few instances of the assassin using the world as a distraction, dropping a chandelier with a bullet just before pulling the trigger on his victim. The trailer also shows the five unique assassin players will choose from in the game while mentioning that the series’ iconic hero Agent 47 has gone missing, marking the first time in Hitman’s history that a game will not feature him.

With Hitman Sniper: The Shadows the team looks to expand Hitman even further, this time including the story of this universe along with its gameplay. Agent 47 is gone, and “Initiative 426” has been activated. GameSpot recently spoke with two key members of the game’s development team, lead game designer Fahad Khan and senior producer Simon Doongoor, about why this new Hitman Sniper “takes the franchise to a new level.”

We spent time discussing the five new assassins, including the brand-new additions to the Hitman franchise designed by Square Enix Montreal in collaboration with IO Interactive. Core gameplay changes, attention to the Hitman universe, and accessibility are all major topics as well, and I came out of the interview with a clear sense of Square Enix Montreal’s direction with this new Hitman game.

This interview was conducted via video conferencing and edited for readability and clarity. 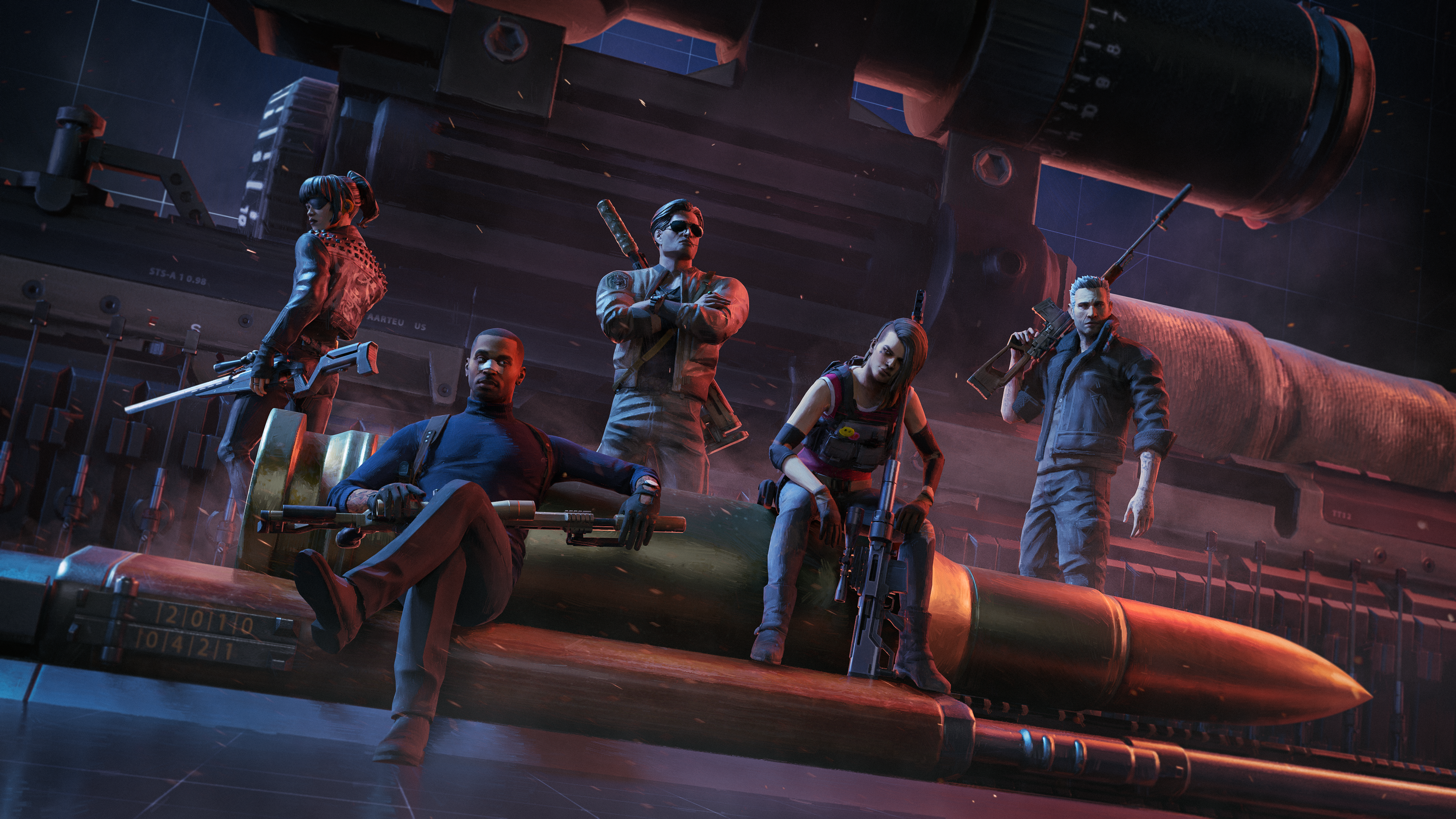 The big hook of this game is you’re not playing as 47 this time; there’s five new assassins to choose from. How does each one stand out in gameplay? Do each of them have their own perks, rifle, etc?

Khan: Yeah, these are supposed to be five separate agents, people who have the assassin’s DNA as a starting point. So essentially, each of their flavors and styles will be very unique. Every player, regardless of their preference for how to play, can respond to conflict in a very distinct way. Each agent will have a unique rifle, a new backstory, a new location in the world, unique abilities, and a new play style.

Doongoor: To add to that, the world of Hitman, including the original Hitman Sniper, was built on what they often refer to as “creative killing” or using the environment to your advantage to remain in stealth, not raise the alarm, things like that. With these assassins, or agents as we like to call them, because of their unique skills and abilities, it forces you [to adjust your gameplay]. When you think you’ve mastered a contract with a given character then try again with a different one, you realize that you definitely need to change your strategy to be as advantageous as possible in gaining the most points and rewards from a contract.

That actually answered my next question, which was going to be “does that mean each character is assigned to one specific mission,” but you just said every character can play every mission and you’ll be changing your strategy. That being said, is there one character that has stuck out to you as a favorite when you are playing, or do you try to mix it up and use all five of them evenly?

Doongoor: Personally for me, if I had to choose, it would be Agent Kolzak and that’s just simply for the emotional attachment, given that Knight and Stone were existing characters already in the Hitman universe. Kolzak was our very first character that we created with our friends at IO Interactive, which was a proud achievement for the team to contribute a brand-new character to the Hitman universe. If I had to choose a second, just for argument’s sake, it definitely would be Agent Soji. I think the team really pushed the visual boundaries in order to give her a unique look and style.

Khan: As the lead game designer I have to play all of the agents to make sure that they’re fair across the board. But if push comes to shove and I was to pick a particular agent, I think it would be Kia for me, most primarily for his electrocution rounds. He has a very cool ability which allows him to fire a special electrocution round, which can chain and electrocute anyone standing nearby as well. It’s a very powerful and satisfying ability for a player to use whenever the situation calls for it.

This is the first-ever Hitman-branded game where you’re not starring as 47. Does that fact cause any added pressure on the team, considering you’re about to expand this universe in a way that’s never been done before?

Doongoor: So there’s no denying that Agent 47 has been the face of the franchise, but the previous introductions of new agents like Knight and Stone sort of paved the way for bringing in new agents. Following up with that and bringing new agents into the Hitman universe seems to be a welcome path.

I think the pressure would come from making sure the players actually enjoy these characters as much as we do creating and playing them, but more importantly that they actually feel part of the Hitman universe. That’s the main thing that we’ve been striving for to ensure with IO Interactive, so we hope that our audience feels the same way.

Khan: Yeah, I would agree. Agent 47 is definitely the main character of the Hitman universe. His presence and influence is embedded within the franchise’s DNA. However I am really excited for everyone to meet our new agents and get to know them through the gameplay.

How has the interaction been with IO while developing The Shadows? Have they been open to your ideas or have they been telling you how to proceed?

Khan: The relationship with IO has been very good. The Shadows is a wholly independent and separative narrative from the “World of Assassination,” so they’ve been very cooperative in allowing us to use the existing agents while also expanding the universe within the confines of the franchise DNA.

A quote in the press release that stuck out to me states that The Shadows is not a sequel to 2015’s Hitman Sniper, instead it “takes the franchise to a new level”. Why is that distinction important to point out as you first reveal the game to the world?

Doongoor: I think many factors actually lead to this. First and foremost, we specifically wanted to craft a much different experience with more depth. Secondly, the focus on these new characters is definitely a variable, making a new experience that also includes improved creative killing. But last but not least, the entirely new storyline is an extension of the franchise but set in its own Hitman universe.

Could you explain to me what is happening in the scene shown in the trailer? Are there any story elements concerning who the target is or where they are, or is that just a teaser for what’s coming in the game?

Khan: The announcement trailer is very much linked to what you will see in-game, including the location. If you pay very close attention, you might find some of our key characters, and you’ll start to see some creative killing aspects that will be in the game as well. As the camera pans out and pushes back towards the agents, you can see some of the creative carnage that you can cause.

What other new features are coming to The Shadows from the original Hitman Sniper game? How are you building on that gameplay?

Doongoor: The original Hitman Sniper was definitely a great learning experience. It allowed us to better understand what the audience was actually looking for. We’ve improved a lot of creative killing, even for the most novice player. It sometimes could be deemed as something difficult to grasp, but we’ve definitely made it more approachable. However, we didn’t compromise any of the advanced strategies in the experience for the most experienced users.

In addition we are bringing more sandbox levels rich in different creative kill opportunities, but more on that will be coming in future updates. Finally, we’re adding a new competitive gameplay experience, which again will be more fleshed out in detail later on.

Khan: Obviously we’re very excited for players to try the new roster of agents and their new rifles, abilities and backstories. We obviously want players to experience the new narrative within the Hitman universe as well, so hopefully we can do that justice. The number one priority for us though is to enhance creative killing, doubling down on the very core experience of Sniper. It’s what made the game so engaging, so tactical and strategic, so we focused on providing a more accessible version of that for our audience.