In Marvel’s Avengers, Spider-Man And The New Raid Put A Premium On Teamwork

One of the things that really works about Marvel’s Avengers is the way it manages to drop a bunch of heroes into a single situation but makes them all feel unique and interesting to play. The addition of Spider-Man to the roster for PlayStation 4 and PlayStation 5 players looks primed to further diversify the gameplay experiences, with an acrobatic playstyle that gives a team-based swing to the sorts of moves that have defined Spidey’s recent video game outings.

GameSpot recently got a hands-off look at Spider-Man gameplay in Avengers, as well as a preview of Avengers’ first raid, Discordant Sound, mostly focused on just how you’ll handle the game’s big, enemy-filled fights while donning the Webslinger’s mask. As one might expect, fighting as Spidey is, in fact, all about web-slinging–his webs are central to his combat style, and it looks as though he’ll excel best when he’s able to web up and shut down enemies so the rest of the Avengers can wail on them.

In the demo we saw, which put Spider-Man in a handful of combat scenarios against Avengers’ various enemies, the big focus of his moves were on the judicious use of his webs. Web actually serves as a new status effect that only Spider-Man can dish out to enemies, filling a “web’ meter on them as he hits them with various web attacks. When the meter is filled, the enemy is completely tied up by webs–while they’re webbed, enemies can’t attack, and also receive additional damage. That allows you to fight as Spider-Man in much the same way as in the other recent Spidey games, where you can judiciously take some members of a group of foes out of the battle by webbing them up.

Two of Spider-Man’s Heroic abilities, along with his ranged attack, are used to web up foes. His assault ability is a Web Bomb that explodes and sprays webs in all directions, and can be customized in various ways to stick enemies to walls or deal more damage. His ultimate ability is the Web Slam, in which Spider-Man makes a wrecking ball out of web and then smashes it into enemies, dealing a ton of damage while also gunking up everything in the area. That, too, can be customized to either web up more enemies, do more damage, or leave web all over the battlefield, which slows down opponents so they have a tougher time closing distance and attacking your teammates.

Because of the reliance on his webshooters, Spider-Man’s role seems heavily weighted toward fighting as a support character, at least with certain builds. His web abilities are great for giving the other Avengers a hand, and he can even web up the bigger, tougher foes on the battlefield, either to give a brief respite from having to deal with them, or to allow his teammates to take them out as quickly as possible. He also sports the Spider-Drone support ability, deploying a flying drone that can snipe at enemies on the battlefield, heal teammates, or drop a big shield bubble where Spidey and his teammates can take cover. In general, most of his abilities are aimed at taking key players out of the fight for a while, allowing you to enact your favored strategies for winning fights by prioritizing targets and disrupting enemies’ abilities to put hurt on you and the other Avengers.

Spider-Man is no slouch in a straight-up fight, though, and his acrobatic fighting style looks to be very similar to what’s on offer in Marvel’s Spider-Man. His intrinsic ability is his Spider-Sense, which gives him a sense of when an attack is coming and conveys a variety of boons when he dodges attacks. Build up his Intrinsic Ability meter, and Spider-Man can start executing takedowns on enemies without stunning them. So your preferred fighting style as Spider-Man looks like it’ll be all about hit-and-run, dodge-heavy fights. 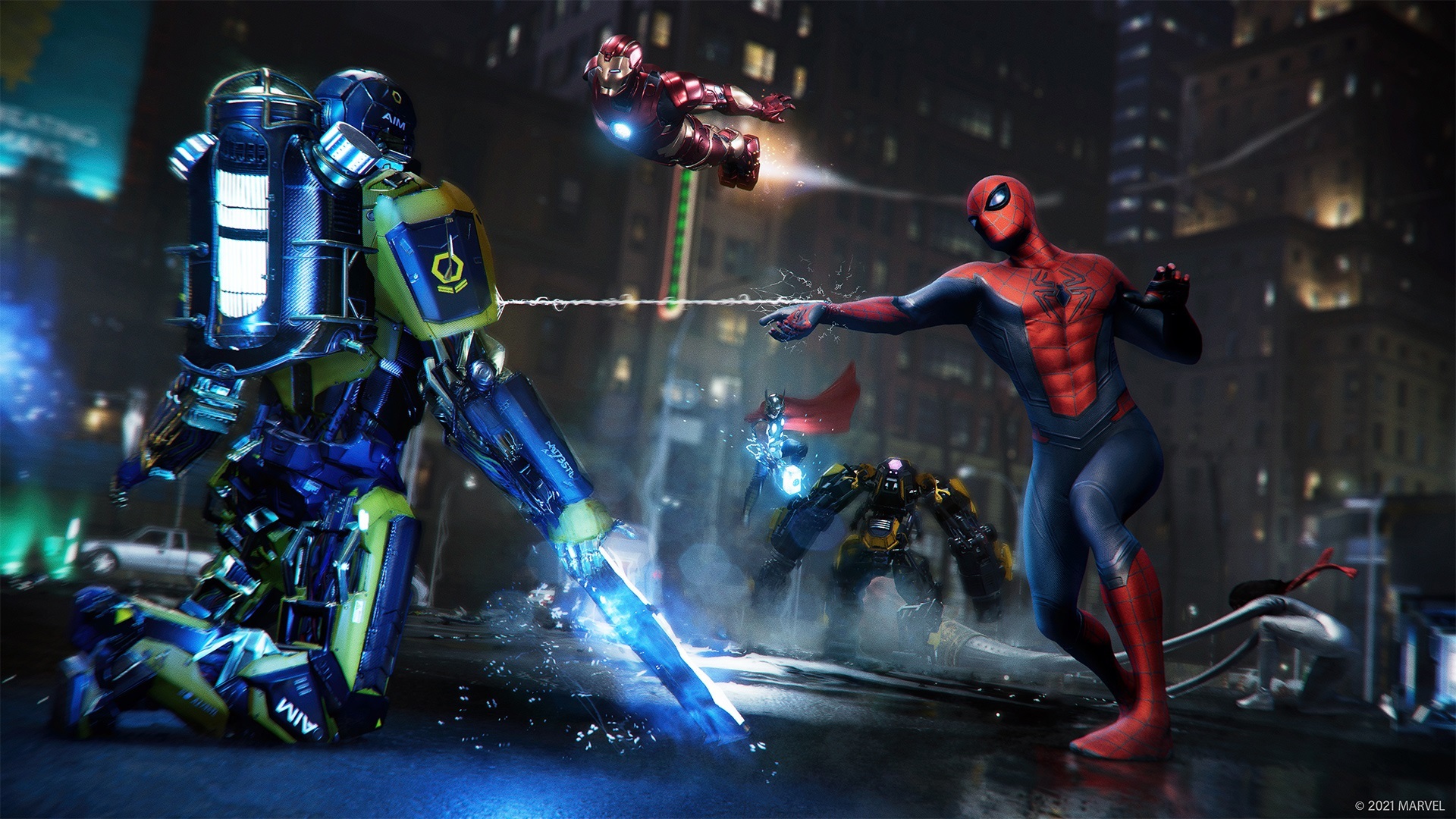 You can use your webs and wall-crawling abilities to quickly traverse the battlefield, pulling off the same kind of web-zips and point launches as in Marvel’s Spider-Man. Spidey seems to be great at rocketing across the battlefield to deal with new threats or to snag an enemy and yank them off their feet or shoot himself straight into them. Dodging enemies opens them up to a lot of counter-attacks, several of which can web them up, and he can also knock people up into the air and juggle them for a whole other way of controlling specific foes.

We didn’t get much of a sense of what Spider-Man’s hero story will entail, but from the looks of things, he’s going to be a very handy addition to your Avengers team, and a fun, strategic character to control. In other recent Spider-Man games, a bit of focus has been on controlling the battlefield to keep Spidey from getting overwhelmed, and it looks as though Crystal Dynamics has transferred a lot of that same feel into Avengers’ team dynamic with their take on the character. After all, the power of Spider-Man’s brain is as important as that of his muscles, and it seems fighting with him will be as much about thinking about how best to control enemies as it will be about beating them down.

An Avengers Dose Of Destiny 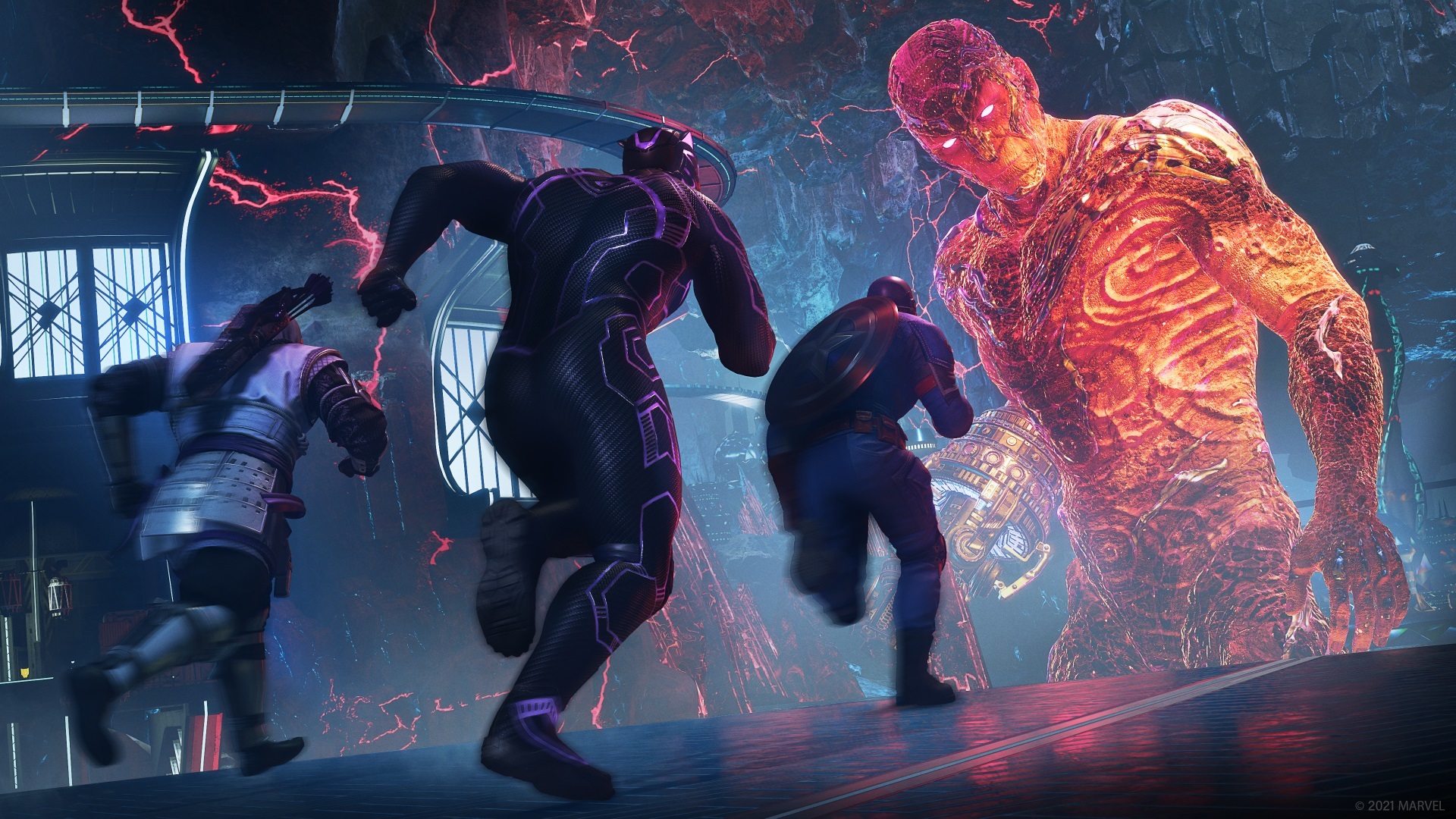 The second half of our hands-on preview ran through Avengers’ first endgame raid, Discordant Sound. It takes place immediately after the events of the game’s first expansion, War for Wakanda, and sees players taking on a huge, semi-magic version of villain Klaw. While it looks like the raid will include a lot of tough combat against some new enemies, the most exciting part is the addition of more team-based mechanics that’ll challenge you and your squad.

The raid looks pretty expansive, taking players into the Vibranium Mound in Wakanda, where Klaw has become a giant being of sound and corrupted vibranium. What that means practically is that you’re not just fighting your way through a series of rooms–you also have to deal with the new powers Klaw has gotten. A lot of these battles have you fighting enemies while working together with your teammates to solve puzzles. In one room, you need to hit a series of switches in order to lower a sonic barrier that keeps you from advancing, and to protect those switches so you can get them all activated. In another location, you’re forced to work your way through a series of rooms by holding down pressure plates to open the doors so you can advance. There are two switches in each room, so two characters have to hold them down while the other two protect them. From what we could tell, once the door is open, the protecting team then needs to run forward to activate two more plates, thus keeping the door open so the squad members in the first room can open the door.

We saw a few boss fights during the raid, including a battle against a giant spider robot and some battles that included a skyscraper-tall Klaw himself. It’s tough to say exactly what the mechanics in those fights will be, but they suggested you’re going to need to work together to coordinate a lot with your squad. One fight seemed to require you to take cover from energy blasts radiating from the giant Klaw while protecting a central point from incoming attackers. In another, the only way to actually damage the boss was to fight long enough to stun it, opening up a pathway deeper into the mound, where some members of the team could find a buff item that would allow them to finally do some real damage.

While the hands-off preview didn’t give a full sense of everything you’ll be doing in each of these fights, they definitely looked bigger and more involved than the battles Avengers has offered in the game so far. They remind me a bit of raids in Destiny 2, which are often very heavy on mechanics that require six players to work together to accomplish goals, demanding a ton of communication and precise actions. Our look at Discordant Sound didn’t seem like that raid will be quite as complex or mechanically demanding as what Destiny 2 players deal with, but it definitely suggested you’ll need to rely on your squad and coordinate your actions more than less demanding activities in Marvel’s Avengers usually ask of you. That’s good news–Destiny 2 raids are some of the coolest gameplay experiences out there, and it’s exciting to see Avengers amping up the teamwork and strategy requirements for its toughest content. 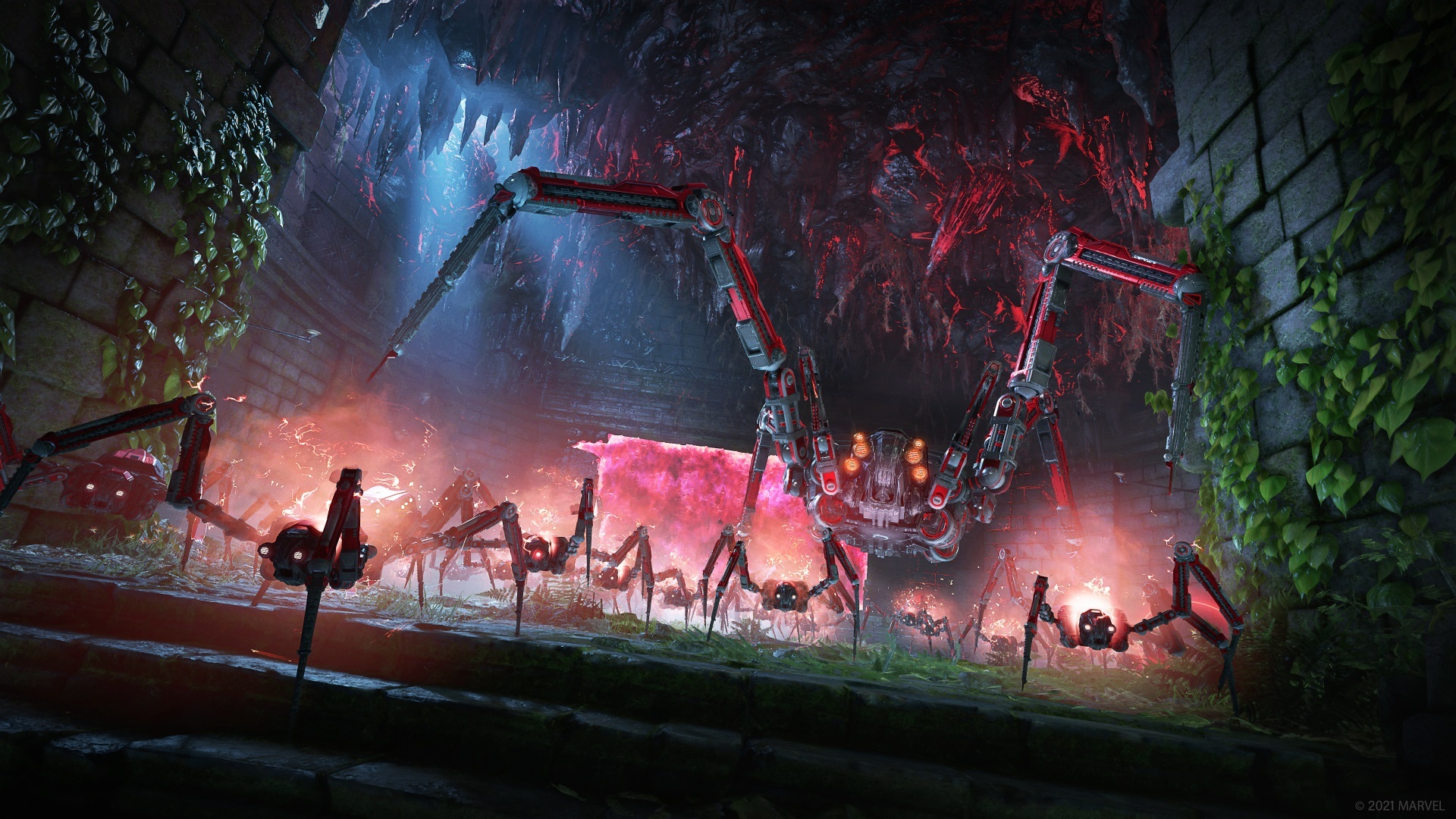 We’ll have to wait and see just how demanding and intricate Discordant Sound becomes, just as we’re still waiting to actually don the mask and see how it feels to join the Avengers as the Friendly Neighborhood Spider-Man. But in both cases, Crystal Dynamics looks like it’s continuing to add new experiences to the Avengers offering in ways that lean into the best things about the game: its ability to add gameplay variety and the feeling of becoming a useful member of a team, rather than a lone hero.

Spider-Man is a PlayStation exclusive, but the Discordant Sound raid will be available to all players. Both pieces of content hit Marvel’s Avengers on November 30.