Iron Banter – This Week In Destiny 2: Trials Of Osiris, The Anti-Traveler, And The Definitive Destiny

Just about every week brings something new to Destiny 2, whether it’s story beats, new activities, or interesting new combinations of elements that let players devastate each other in the Crucible. Iron Banter is our weekly look at what’s going on in the world of Destiny and a rundown of what’s drawing our attention across the solar system.

When Destiny 2 finally gained cross-save capabilities back in 2019, I was finally able to stop playing the game on PlayStation 4–where I’d been since the first day of Destiny–and hop over to PC, where my serious Destiny friends resided. That was around the time I also started to take the PvP aspect of Destiny 2 semi-seriously, and while I know that I’ll never be a great Crucible contender (I’m too damn old at this point and completely unwilling to put in practice time to improve), I’ve really enjoyed a stepped-up focus on the competitive aspect of the game.

That’s why the best news this week is Destiny 2’s new take on the Trials of Osiris. Sure, Savathun and Mara Sov said some more really cryptic, downright unsettling stuff about the threats we’re dealing with next year in Destiny 2, but it’s the Trials that are dominating my thoughts as we head into the third weekend of the Season of the Lost.

Trip To The Litehouse

I’ve always liked the concept of the Trials of Osiris, just like all the aspirational and endgame content in Destiny 2. Its requirement that you go “flawless” and win seven tough matches in a row, unlocking some of the game’s best rewards, is the kind of extra-special, cool experience that I associate alone with this game. For the people really invested in Destiny 2, this, like raids, is something that pays off your time in the game and your excitement for it with a one-of-a-kind gaming experience.

But in practice, Trials has always been, at best, a pain in the ass for the vast majority of us Guardians. It’s an event that has traditionally been prohibitive for all but the very best players. Top-tier streamers, pro gamers, and all-around especially good Guardians have dominated the Trials, stomping on us lesser mortals every weekend. And that creates a feedback loop. No matter how sweaty I get, I’m not getting to the Lighthouse; it’s something I had to come to expect. So, for the most part, I quit playing Trials–and other players react like I do. The pool of Trials initiates gets smaller and smaller as it gets more and more frustrating a mode to take on, and that means you’re more and more likely to run into only the people who hang around: the best people. That increases the frustration, driving more players out. And so Trials became a playground for the absolute elite, a section of the game that was a waste of time for the rest of us.

Recent adjustments to Trials, which include dishing out rewards with weekly bounties and at different win tiers, have mitigated the frustration a bit. My team and I can at least reliably make our way to three or five wins before we bottom out, so we get something. But it still always felt like Trials was a mode where the rich get richer and the poor merely present themselves to make a broken, bloody staircase of Guardian corpses for the Flawless players to climb to more fun rewards.

With the new changes to the Trials of Osiris in Season of the Lost, everything is different–at least on paper. As of this writing, I won’t have had time to jump into the new Trials mode and actually try it out. But the list of alterations Bungie has made seem excellent. New matchmaking, new opportunities for solo play, new reward tiers, new Passages that no longer count losses; all of it means that the vast majority of Destiny 2 players have a reason to get into the mode again. The more the player pool expands, the more each of us regular Joe Crucible contenders actually has a shot at the Lighthouse, as we dilute the pool of ludicrously good folks with our mediocrity. That means the mode will be more fun for us to play, and we’ll be facing each other more of the time.

And overall, that’s great. Trials is a cool idea, but not if it drastically locks out most of the player base. And it doesn’t need to sacrifice what makes it special and super-tough–you still have to rack up seven wins with no losses to make it to the Lighthouse–to be something that everyone can enjoy. I’m hoping the changes work as well as it sounds like they should, and I’m hoping that a big influx of more players into the mode will actually mean that, sometimes, a miracle Flawless will happen. But if not, I’m content to at least pick up all the armor and a few nice great guns for my trouble. 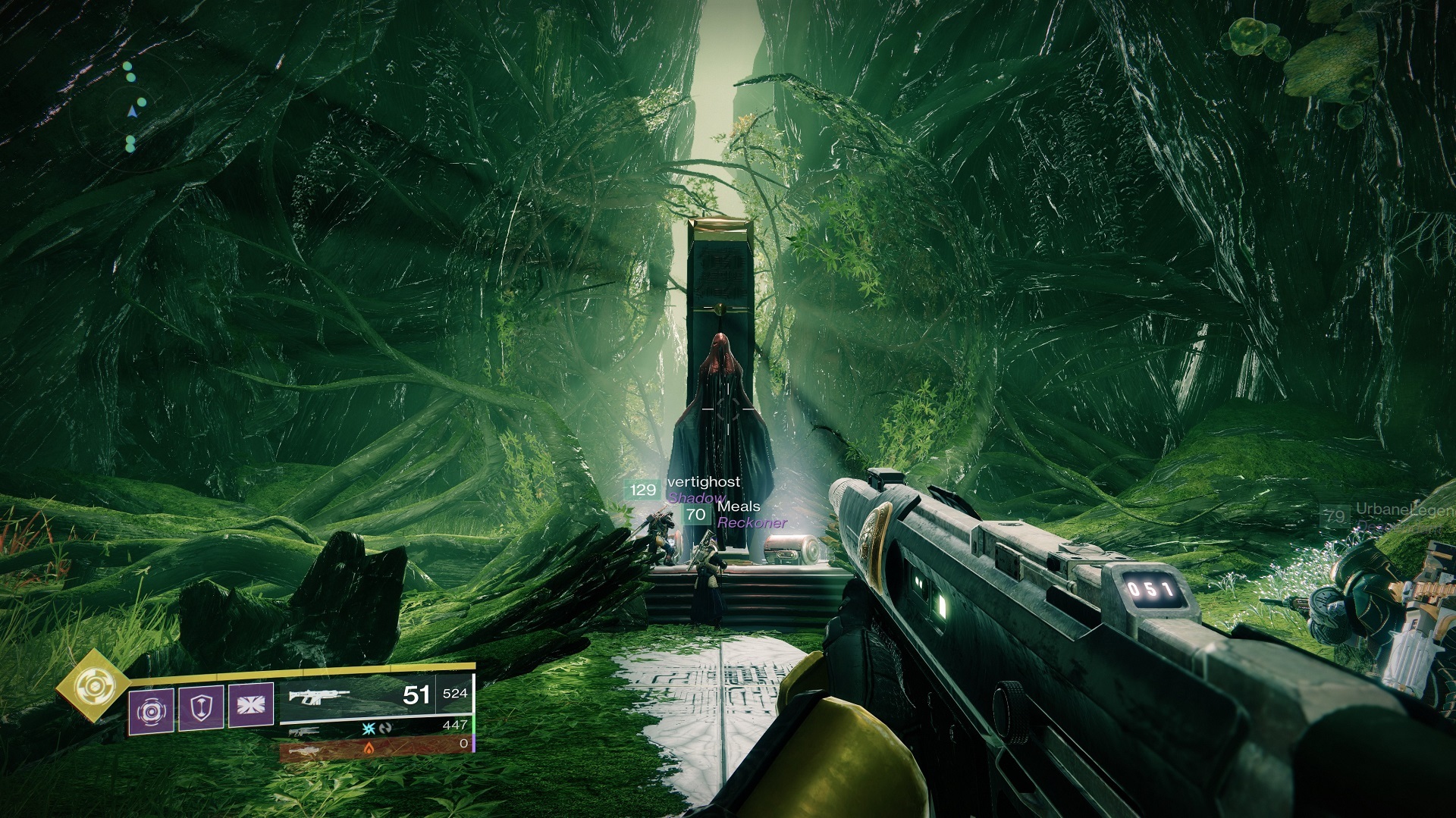 This week’s story content sent us to the Shattered Realm take on the moon, the excellently named Ruins of Wrath. The radio dialogue between Petra, Mara Sov, and Ikora this week, along with our visit to Savathun, continually pivots around a central idea: Xivu Arath answers to somebody else.

This is something that’s been swirling in the background since, like, Shadowkeep. Every time we’ve talked with the Darkness–be it in the Moon pyramid, on Io during the Season of Arrivals, on Europa as we gathered Stasis powers, and so on–there’s been the implication that there is a real, specific “entity” somewhere in the distance that we haven’t officially met yet. The Black Fleet of pyramid ships is some kind of manifestation of that creature, but pointedly, we discovered during Arrivals and afterward that those ships are empty. There’s no one inside to fight. The Black Fleet isn’t a one-to-one Darkness equivalent to the Traveler, it’s something else, and the Presage mission is all about how Calus was trying to make contact with this entity directly. As Osiris-as-Savathun says during that mission, the Darkness and the entity are separate things. (Meylin Games on YouTube has a good breakdown of the Presage clues.)

We haven’t seen whatever the entity is yet. But it sounds like that’s where we’re imminently headed.

It makes sense that, since we’re driving towards the eventual end of this Light and Darkness story arc in the next couple of years, that Bungie is starting to lean harder into establishing that villain in a practical sense. It also feels like this further adds to speculation a lot of people in the community have (including me) that Savathun might be antagonistic in The Witch Queen expansion, but not serve as its actual antagonist. We’re starting to lay down what the Darkness actually is so we can gear up to fight it. 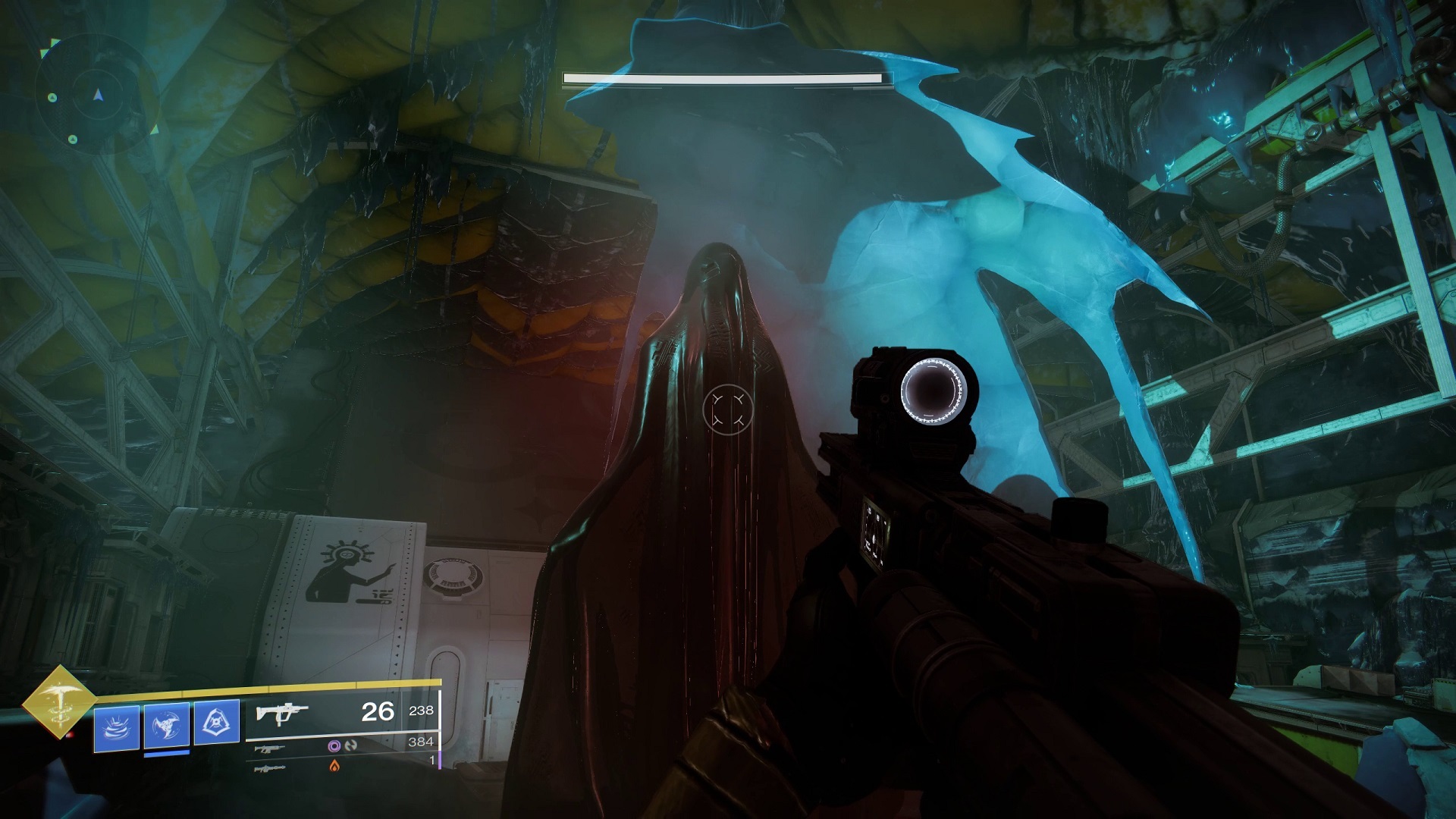 Okay, so what’s interesting about this is what was said about this Darkness entity, which I’ve been calling the Anti-Traveler just to give it a clearer name (Darkness Daddy also works). An ongoing thread this season is the apparent unification of Darkness forces that previously weren’t pals: the Taken and the Hive often work together, but now we’re seeing them also work with the Scorn, which is a new development. The Taken also previously were controlled by Savathun by way of Quria, but we (supposedly) killed Quria in the Season of the Splicer, and it seems the remaining Taken are now working for Xivu Arath. Finally, dialogue this week mentioned that Oryx, the Taken King, did not invent the Taken–he basically borrowed the power to create Taken creatures from the Darkness. Someone else, presumably, is actually in control of the Taken and has been loaning those creatures, and the ability to zap sentient beings into another dimension to turn them into whatever the Taken are, to characters such as Oryx and Quria.

That adds another degree of formidable to the Anti-Traveler and suggests the Taken will be the major antagonist force as we near the end of the saga. It also calls into question how the Hive’s powers work, or will work, especially after Savathun breaks free of her worm. And if you ask me, it provides more evidence for the theory that Savathun gets her Light from the Traveler.

So Bungie is currently teasing a badder antagonist than we’ve seen before, something on the level of the god-like Traveler, and is filling in the details of its abilities. But over and above that, we have what Savathun said last week, about something more than the conflict between the Light and Darkness. The characters and story here are spinning out, seemingly, two things we need to be worried about in the future. First, there’s the Anti-Traveler, the immediate Darkness threat that’s been building since the post-credits scene of Destiny 2. But second, there’s whatever Savathun was referring to–whether that’s the overall concept of Destiny 2 as a game itself, or a level of existence beyond the paracausal entities messing with us right now. But it sounds like more hints at what we could see of Destiny 2 once we’re past the last announced expansion, The Final Shape.

Anyway, the Anti-Traveler is coming. Wonder if it’ll look like those statues we’ve seen around the game so far, and what might be hidden under that black cloth on its head.

Oh, one last thing! Last week in the lore on the new Iron Banner armor, Saladin gives a passing thought to Savathun’s Song, that “viral chant” we’ve heard characters including Shaxx, Crow, Eris, and Lakshmi-2 singing, for a start. Just something that hasn’t come up in a while that seems like it might be super-relevant to the ongoing conversations we’re having with the Hive god of deceit.

After Bungie’s Witch Queen showcase at the start of the Season of the Lost, I got to sit down and have a conversation with Destiny 2’s game director, Joe Blackburn, and its general manager, Justin Truman. We discussed a bunch of things both present and future in Destiny 2, including what they’re drawing on for inspiration with The Witch Queen, what playing against Hive Guardians will feel like, and how the developer is working to make more of Destiny 2 feel like its iconic content, such as raids and dungeons, and less like other first-person shooters.

There’s more from the conversation I’ll be publishing soon, but to start with, Blackburn and Truman’s explanations of what Bungie wants The Witch Queen to be like are compelling. Specifically, Blackburn said the team wants more of Destiny 2 in general to be more like the game’s best parts–missions such as Presage, as well as activities such as the dungeons and raids. The plan with The Witch Queen in particular is to make “the definitive Destiny campaign,” he said, which sounds pretty intriguing.

You can read the first of these pieces from the interview with Blackburn and Truman here, and I’ll hopefully have more from that conversation–maybe the entire conversation itself–in the coming days as well.

One thing I didn’t get a chance to talk about with Bungie was the 30th Anniversary celebration event the developer is putting out later this year. It has some specific meme intensity that I can’t ignore–a dungeon based on the Loot Cave from Destiny 1 (an element that is both hilarious and traumatic for me from the early days of covering the game) and the return of Gjallarhorn, Destiny’s most iconic gun. Darryn Bonthuys took a look at what makes the Gjallarhorn so special, which is a good primer for those Destiny fans who missed out on the gun back in the day. You might also want to dig into the lore about Gjallarhorn a bit in places like Ishtar Collective, as it’s one of those items that really feels like essential “Guardian history.”

That’s it for the Destiny stuff that’s buzzing in my brain this week. If there’s anything I missed, feel free to share it in the comments below.