Kena: Bridge Of Spirits Is All About Connections With Your Friends–And Your Enemies

Don’t be fooled by the exceeding cuteness of the Rot, the tiny black spirits that hang out with you in Kena: Bridge of Spirits. Though they sport big eyes, hilarious hats, and a goofy demeanor, those little creatures can be dangerous in a fight–especially in big groups. Luckily, they’re on your side.

GameSpot recently got a chance to spend about an hour playing an early portion of Kena: Bridge of Spirits, venturing into the world surrounding a central village that has been beset by calamity. As Kena, a Spirit Guide, you’re working to find out what happened at the village and to help some of its inhabitants’ restless spirits to move on. The catch is, some kind of corruption has infected the area around the village and the spirits themselves, so venturing into the wilderness finds you battling twisted enemies constructed of wood and plants.

Luckily, the Rot is there to help. The little folks are spirits of decay that inhabit the world, renewing life and restoring balance by recycling things that have died. You can find Rot all over the place, often hidden under rocks or secreted in corners, and the more of them you add to your group, the more powerful they become.

Kena wields a staff imbued with her Spirit Guide powers, and when you run into these enemies and fight them, it’s your primary weapon. Combat feels pretty similar to what you’d expect from other action-adventure games, like The Legend of Zelda: Breath of the Wild, with Kena sporting a fast, light melee attack, and a heavier swing she can charge up. She can also dodge attacks with a quick roll or block and parry attacks with an energy shield, leaving foes reeling and open. But it’s the integration of the Rot into fights that sets Kena apart.

In combat, you can dispatch the Rot to help you against enemies, often distracting and disabling them, or to interact with objects on the battlefield that can give you an advantage, like special flowers that heal Kena. The Rot also help you to destroy “hearts” of corruption on the battlefield, which allow you to drive back the pestilence infecting the world, and to stop new enemies from spawning.

Those interactions are usually done with a single button, so you’re usually not trying to control the Rot as their own entity while also running around and fighting as Kena. But the Rot aren’t always up for a fight–they’re pretty small, after all, and not particularly strong when they’re not working together. So to pep them up, you need to fight enemies yourself to fill a Courage gauge; when it’s full, the Rot feel comfortable enough to jump into the battle with you, opening up their actions. 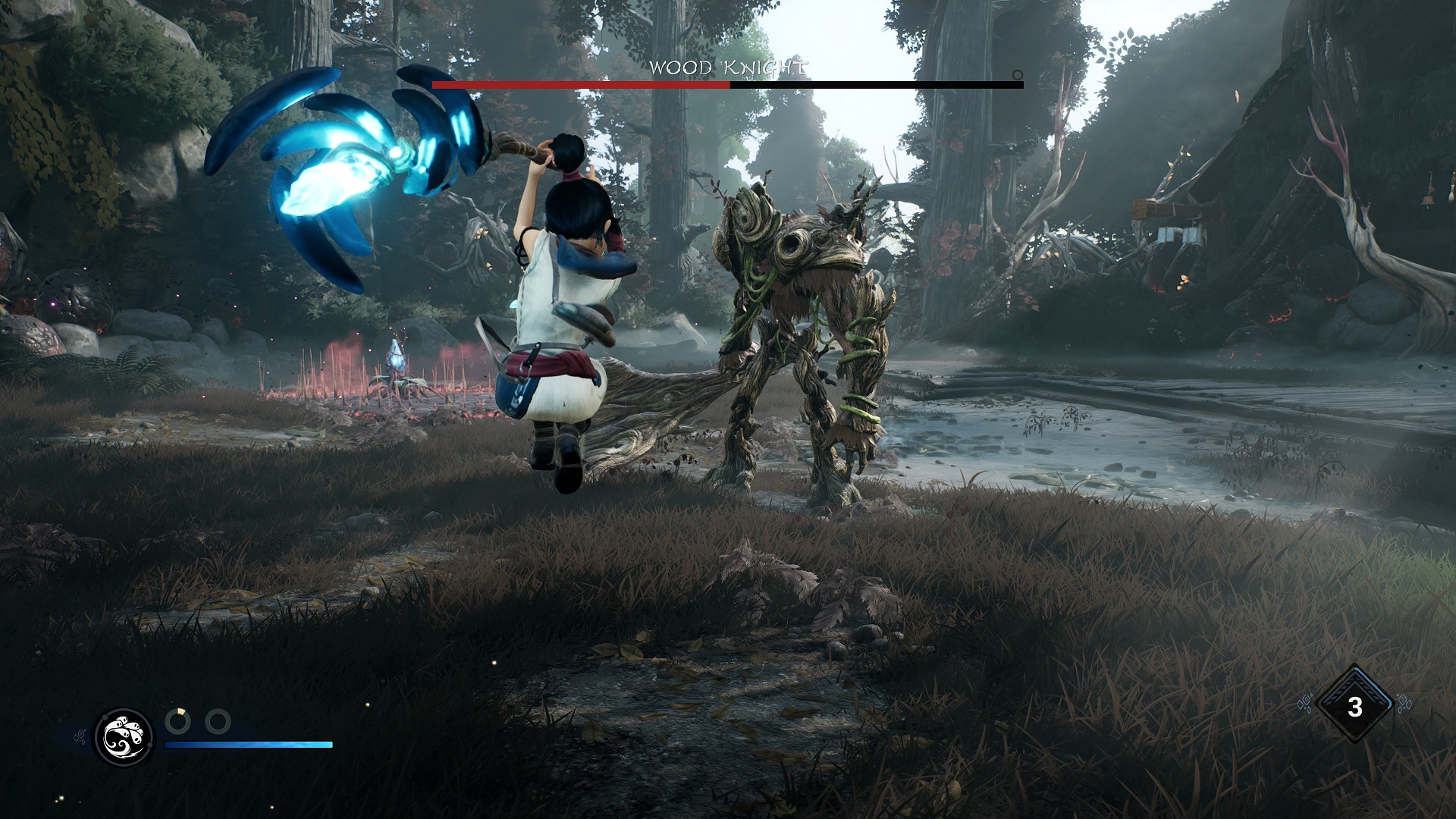 You can dispatch the Rot to do certain things while you fight, and as you level up in the game, you can find different ways to use their abilities. Fighting and exploring the world earns you Karma, which you can spend on new abilities and upgrades for Kena, and these include different Rot attacks that can use the little guys in cool ways. As we played, we unlocked the Rot Hammer ability, in which the Rot swirl around Kena’s staff so she can bring it down in one big powerful slam.

But even out of combat, the Rot are an essential part of Kena’s journey. You might find objects blocking your way, and often, you’ll need to send the Rot to clear the path. Throughout the forests surrounding the village, you’ll find things like damaged shrines and knocked-over statues, but with the Rot’s help, you can repair those things. Fixing them gives you more Karma, so it’s worth exploring the environment and leaving the main path so that you can find new things to interact with.

“A lot of the gameplay… it kind of helped just form that connection with the player organically.”

A theme of restoration and repair runs throughout the gameplay and the story, linking the two together. As we climbed a mountain and explored the area, we found places where the Rot could move statues to solve puzzles, or join them together in a droplet of water to form a sort of spirit amoeba that could move objects and even water plants to restore them. It all helps the Rot to quickly become your constant, amiable companions, popping up on ledges as you’re jumping and climbing to encourage you, or swimming along behind you when you jump into a body of water. Their presence is one way through which developer Ember Lab looks to tell the game’s story and bring players into its world, co-founders Mike and Josh Grier explained in an interview with GameSpot.

“A lot of the gameplay, especially with the Rot because they’re used so much, it kind of helped just form that connection with the player organically,” Mike, the studio’s chief creative officer, said. “That was something that we kind of knew what we wanted to do with that, but that’s something we had to figure out as we’re in development quite a lot.” 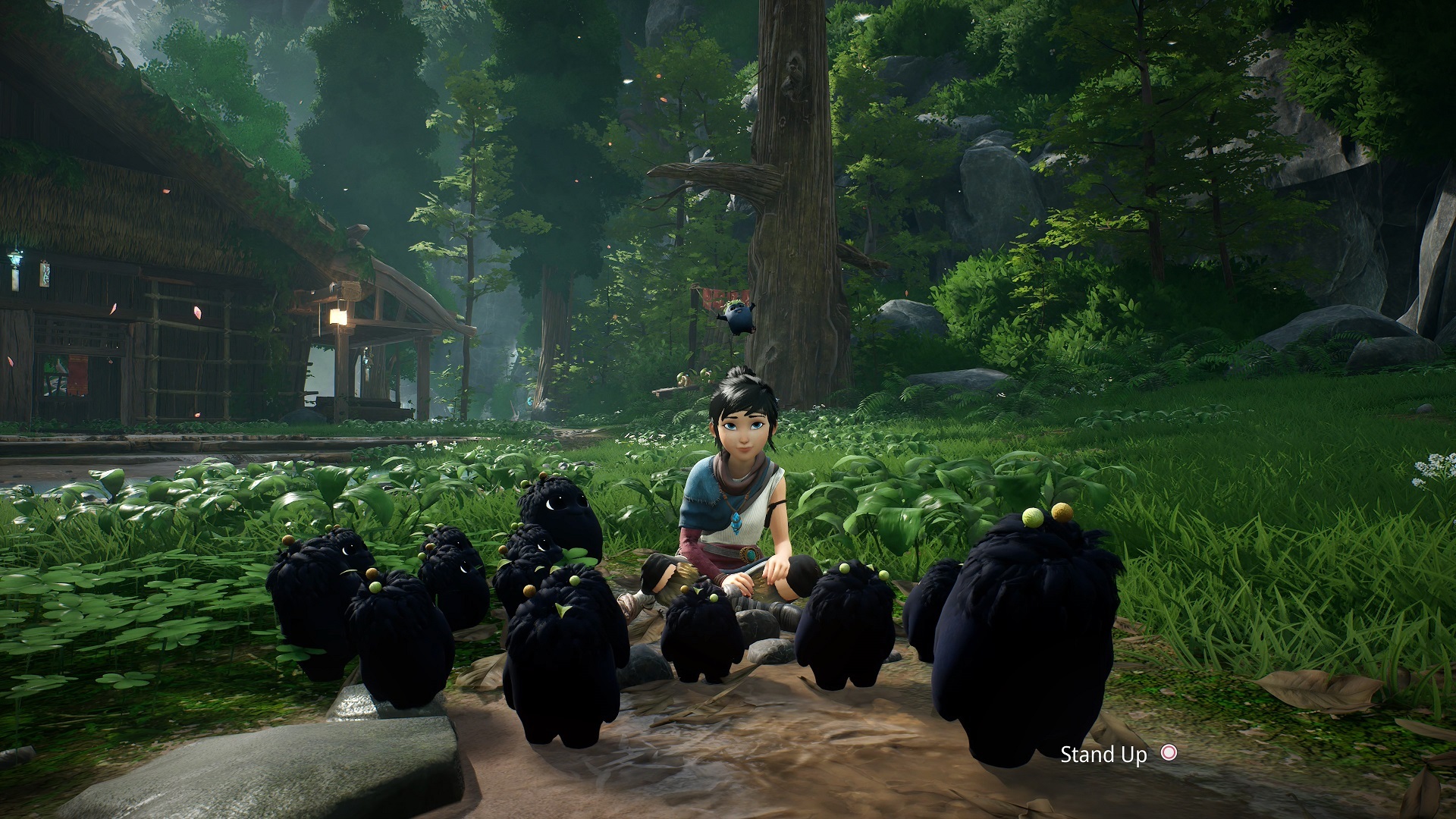 Much of the game seems to be about making those character-driven connections. Though Ember Lab’s background is in animation–it first gained some fame with a short animated film set in the world of The Legend of Zelda: Majora’s Mask–Ember’s chief operating officer, Josh, said that the game isn’t brimming with cinematic cutscenes (though we did see a few of those hands-off moments in our time with it). Part of the reason for that was keeping the game’s scope reasonable, because animating cutscenes can require a lot of work, and Ember is a small studio with only about 15 core members. But part of it is because the developers looked to tell Kena’s story through moments of gameplay and interaction, like in using the Rot.

Kena’s goal of helping spirits move on is largely about uncovering their story and finding ways to connect with them. In our hands-on, we set out to find the spirit of a village named Taro, and to do that, we had to try to find relics of his to summon him. Those relics contain some of Taro’s memories, revealing the tragic story of what happened to him. But we also spent time with his relatives, learning more about him along the way.

Mike said one of the inspirations the team drew on for the game was the Akira Kurosawa film Rashomon, which provides different points of view on the same events. In Kena, you’re uncovering the story of what happened to the village by revealing the tales of the people who were there, and hearing the perspectives of the people who knew them.

“I think that we thought that we would have to have these really meaty ending cutscenes to really sell the story, but I think, because it’s the pace of the game, it allowed us to be a little bit more conservative and just let your experiences with the characters throughout gameplay really inform a lot of the stuff that you learn about Taro towards the end,” Josh said. “You just have a lot more time.” 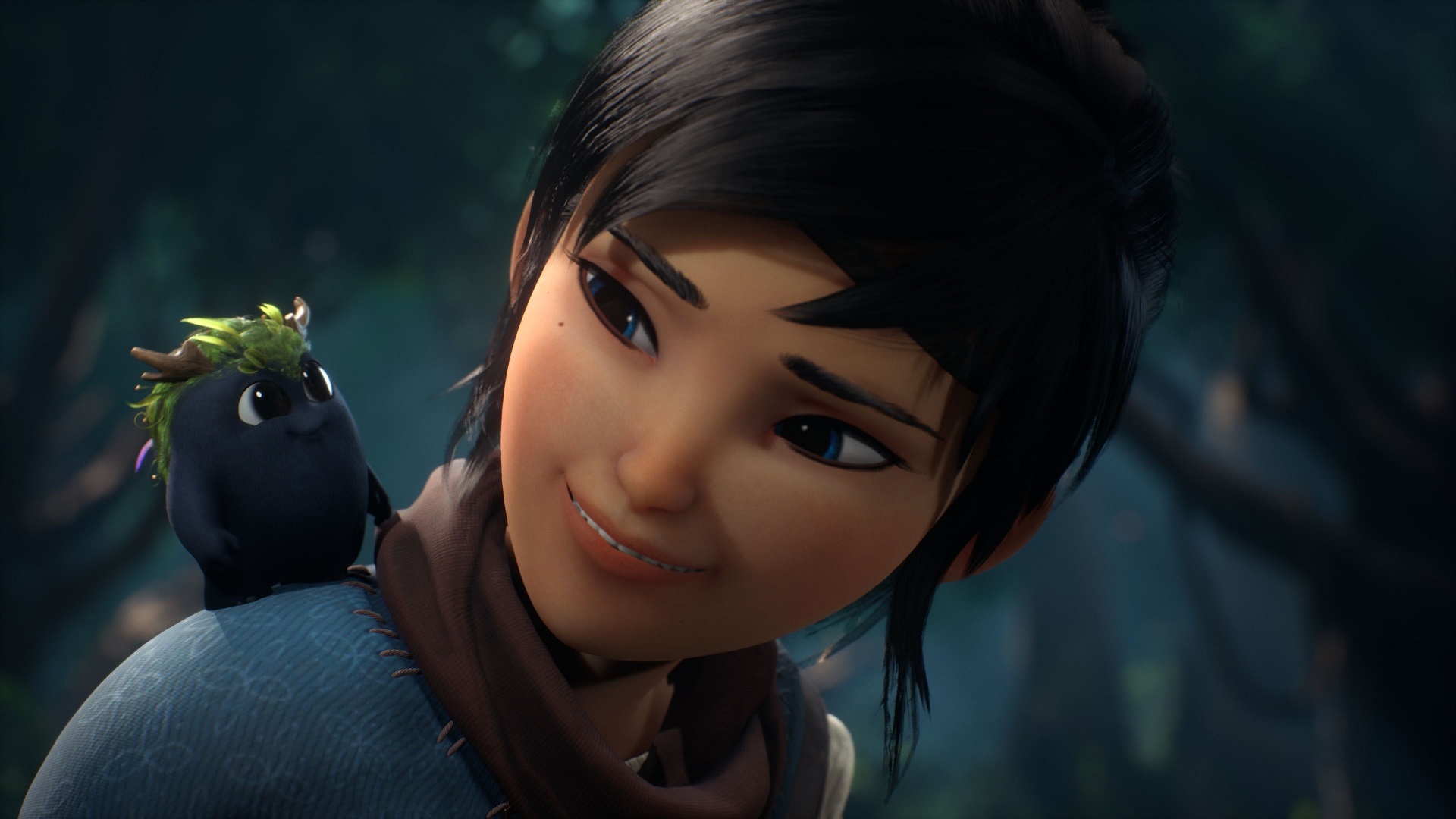 That’s not to say there aren’t cutscenes; Ember Lab took a few opportunities during our playthrough to move the story forward with cinematic moments in which Kena learned more about her abilities as a spirit guide, such as when she learns to turn her staff into a spectral bow, opening up new abilities in fights and new ways to traverse and interact with the environment. It was a handy ability, because we soon needed it for some battles with tougher enemies, either to snipe spirits fighting from trees, or to nail weak points on big, tough wooden knights.

A lot of these battles, especially against mini-boss creatures, take on the feeling of a combat puzzle, in which you need to find ways to block and parry enemies with precise timing, nail their weak points, and utilize the rot to disable them. One fight against a creature called Kappa saw the spirit disappearing into the ground before summoning smaller enemies to fight for him. The only way to really do any damage was to use the Rot to hold Kappa in place, so that Kena could lay into him with her strong attacks.

“f you’re doing your job well as a spirit guide, this is all about the spirit that you’re helping, and helping them let go.”

And combat can get pretty tough, it seems, despite the easygoing look of the game. Enemies are fast and deadly, and your timing with parries and dodges needs to be well-honed to keep from getting rolled by them. Utilizing the Rot well, knowing the scope of the battlefield, and finding ways to keep enemies off-balance are all essential. Mike and Josh said the difficulty can go higher if you want it to, adding elements like losing Courage when you take damage, which makes it tougher to use the Rot to distract enemies or heal yourself, but it can also be made easier to keep players who would rather just focus on the story from getting overwhelmed.

Ultimately, though, fighting the corruption and beating back enemy spirits is about freeing Taro from the blight so the spirit can move on, and from the sounds of things, you’re really doing that by forming a connection with him. The game might look bright and the Rot might be cute, but there’s an element of sadness and tragedy that pervades throughout. 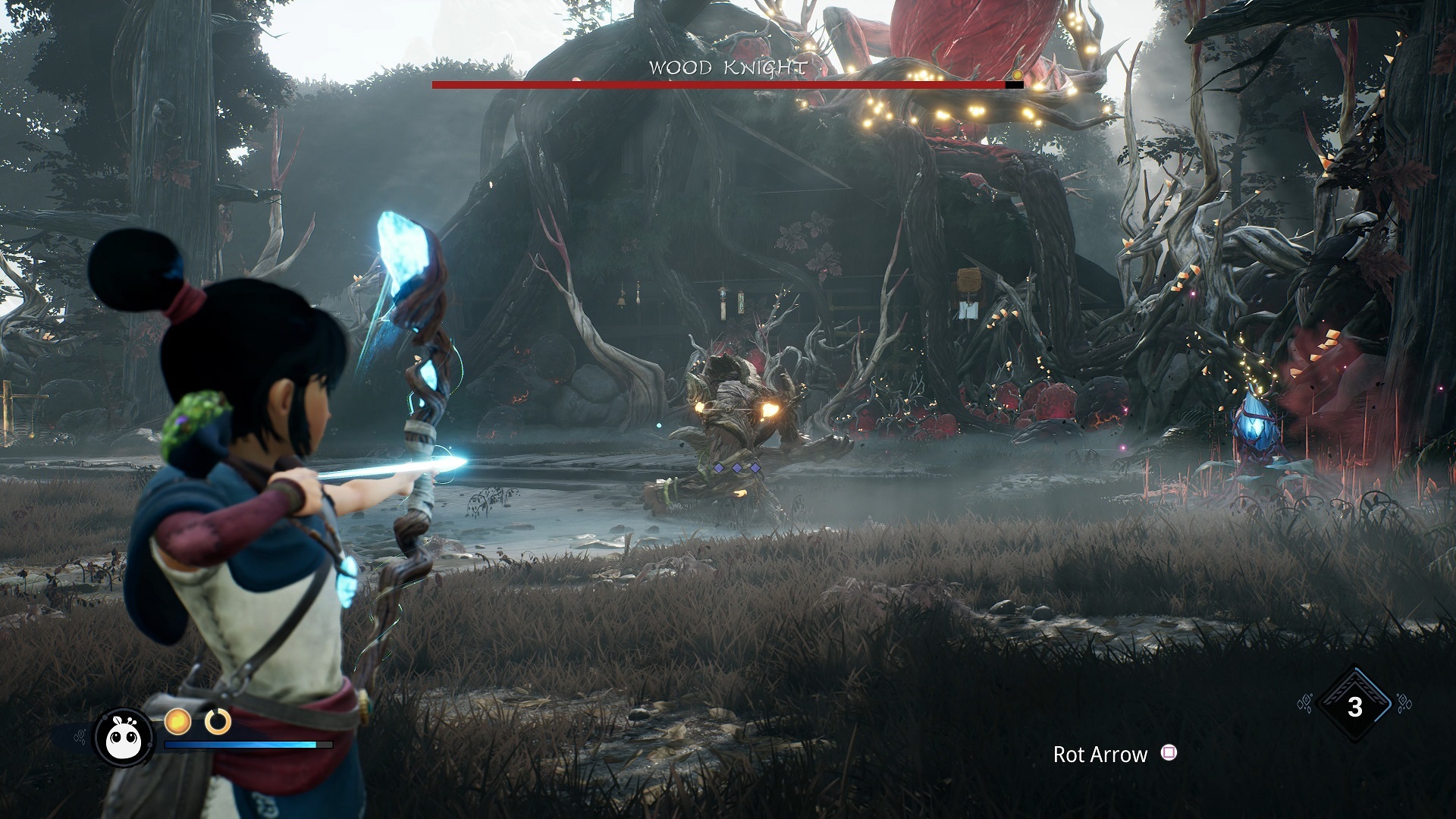 “If you’re doing your job well as a spirit guide, this is all about the spirit that you’re helping, and helping them let go,” Josh said. “So you do have to form a personal connection with them to understand what’s wrong with them, but then ultimately, you’re saying goodbye to them…. You build relationships with all the spirits that you help on the way because at some point to complete your mission, you have to let them go. And I think that kind of bittersweet ending was a goal, inspiration for us as well.”

What seems to make Kena: Bridge of Spirits stand out, though, is the way it blends a lot of different approaches and ideas. It has gameplay reminiscent of a lot of favorites, such as Zelda’s combat, the climbing and environmental exploration of something like Uncharted or Tomb Raider, and the ability to unlock new portions of its map in a bit of a metroidvania way. Its storytelling draws on inspirations from the likes of film and the works of animation studios such as Pixar. But in our time with the game, we found that the mixture of those things elevated the individual parts to make the world of Kena a deep and fascinating one–and worthy of exploring further.

Kena: Bridge of Spirits is slated to release on PlayStation 4, PlayStation 5, and PC in August.