Marvel’s Guardians Of The Galaxy: 10 Things To Know About The Cosmic Adventure

The era of Marvel video games is looking bright, as multiple developers and publishers have several games in development starring beloved characters from the House of Ideas. The next game in that multimedia multiverse is Marvel’s Guardians of the Galaxy, a new title from developer Eidos Montreal and publisher Square Enix. With the team behind this decade’s Deus Ex games and Shadow of the Tomb Raider at the helm, expectations are naturally high for this cosmic caper starring the galaxy’s most recognizable A-holes.

In case you’ve missed out on all the game’s reveal at E3 2021 and the steady stream of trailers since June, we’ve got a roundup on what you can expect when the Guardians arrive later this month.

Eidos Montreal hasn’t shared too much regarding the story of this game, but what is known is that picks up several years after a cataclysmic war took place throughout the galaxy. The damage dealt by that conflict was devastating, and when we join the Guardians, they’re a gang of heroes for hire who are barely held together by their common interests. Naturally, things get worse for the team when they set off a chain of catastrophic events, eventually leading to a wild ride across space to fix their mess. 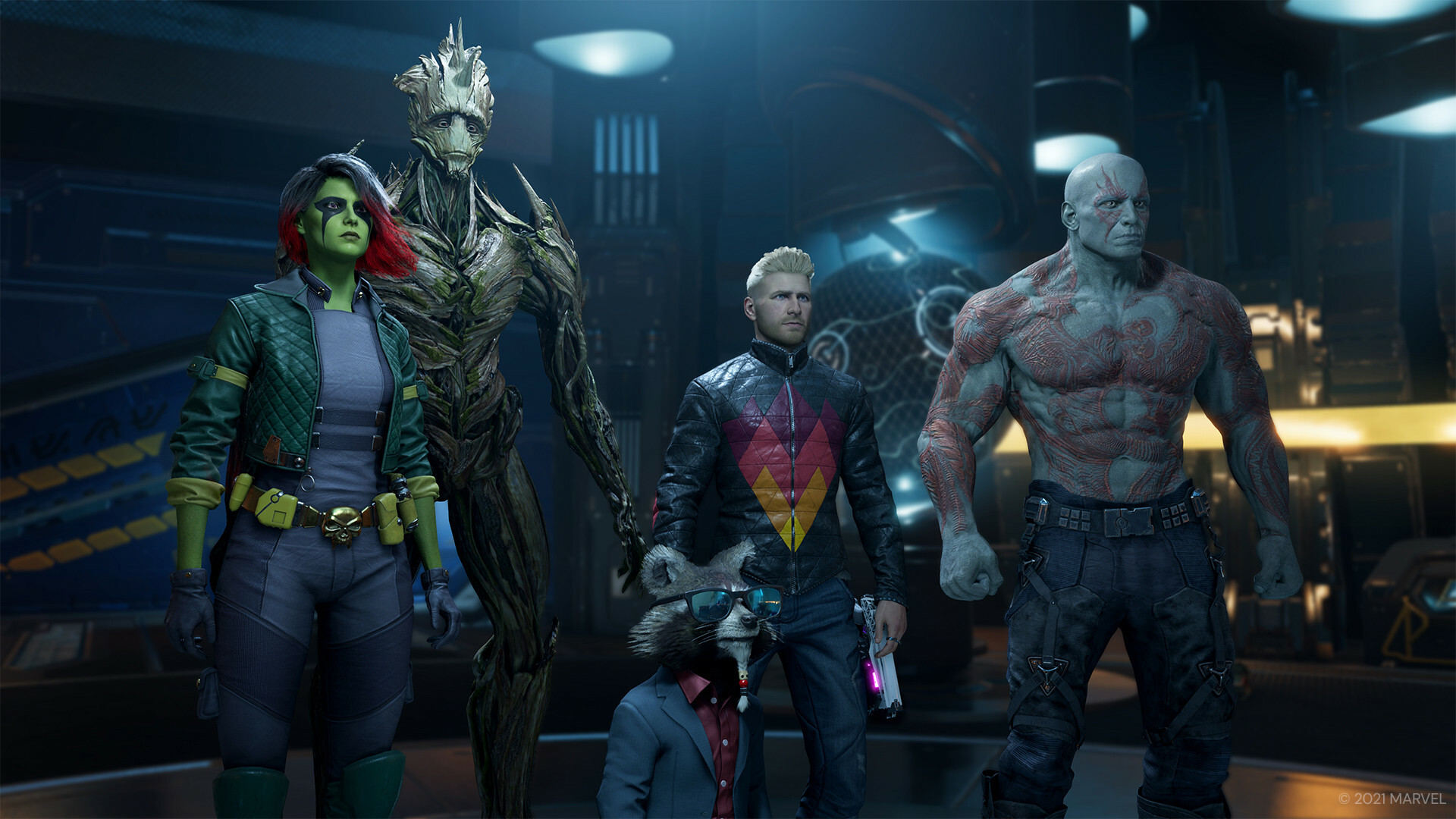 Taking inspiration from the Marvel Cinematic Universe, Square Enix and Eidos Montreal’s version of the Guardians of the Galaxy is made up of the most bankable and familiar incarnation of the group. Peter “Star Lord” Quill leads a motley crew that includes Drax the Destroyer, the deadly Gamora, the grumpy Rocket who’s definitely not a raccoon, and the eco-friendly Groot. Seeing as how this is the intergalactic arm of the Marvel universe, recent trailers have shown off a few other faces that includes the Nova Corps and most importanly, the best dog in the entire galaxy, Cosmo.

Fun fact: To accurately create the canine cosmonaut who wields vast psionic powers as the security chief of Knowhere, Eidos Montreal outfitted a real dog by the name of Diego in a motion capture suit.

Please enjoy this exclusive behind the scenes look at Diego becoming Cosmo 🐾🚀 pic.twitter.com/24q6AFrO3j

Another character that Eidos Montreal is teasing for Guardians of the Galaxy is Him, or more accurately, Adam Warlock. While he’s cloaked in shadows in the tweet below, Warlock usually takes the appearance of a golden-skinned humanoid with a range of impressive physical powers.

And last but definitely not least, fan-favorite character Mantis will also be making an appearance. An occasional member of the team in her comic book and film appearances, Eidos Montreal’s version of the character has a few cosmetic changes, and will likely have a few personality tweaks as well as the studio has pushed to make its version of the Marvel Universe feel familiar but unique. 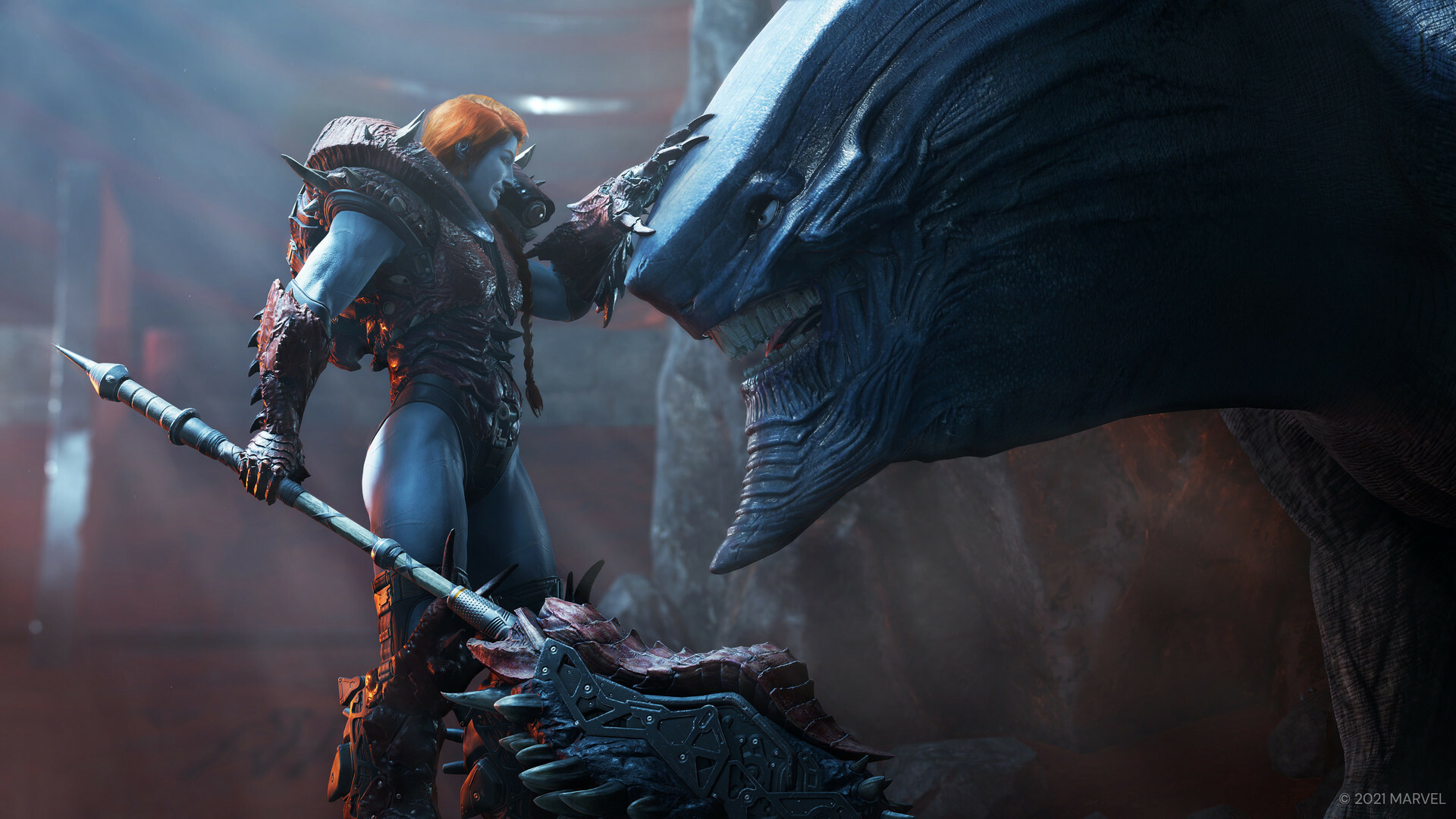 Guardians need villains to protect the galaxy from, and so far it looks like there’ll be two heavyweights in that division to keep an eye on. First introduced last year, Lady Hellbender is more of a conservationist than your typical mustache-twirling supervillain, but she’s a deadly adversary when crossed and has earned the title of Monster Queen in her arm of the cosmos.

The other sinister face making an appearance is Grand Unifier Raker, who in the comics has served as the voice of the Church of Truth. A militant cardinal of the church, Raker had only a handful of appearances before he met his end at the hands of Drax, which has left Eidos Montreal plenty of room to put their own spin on the character. 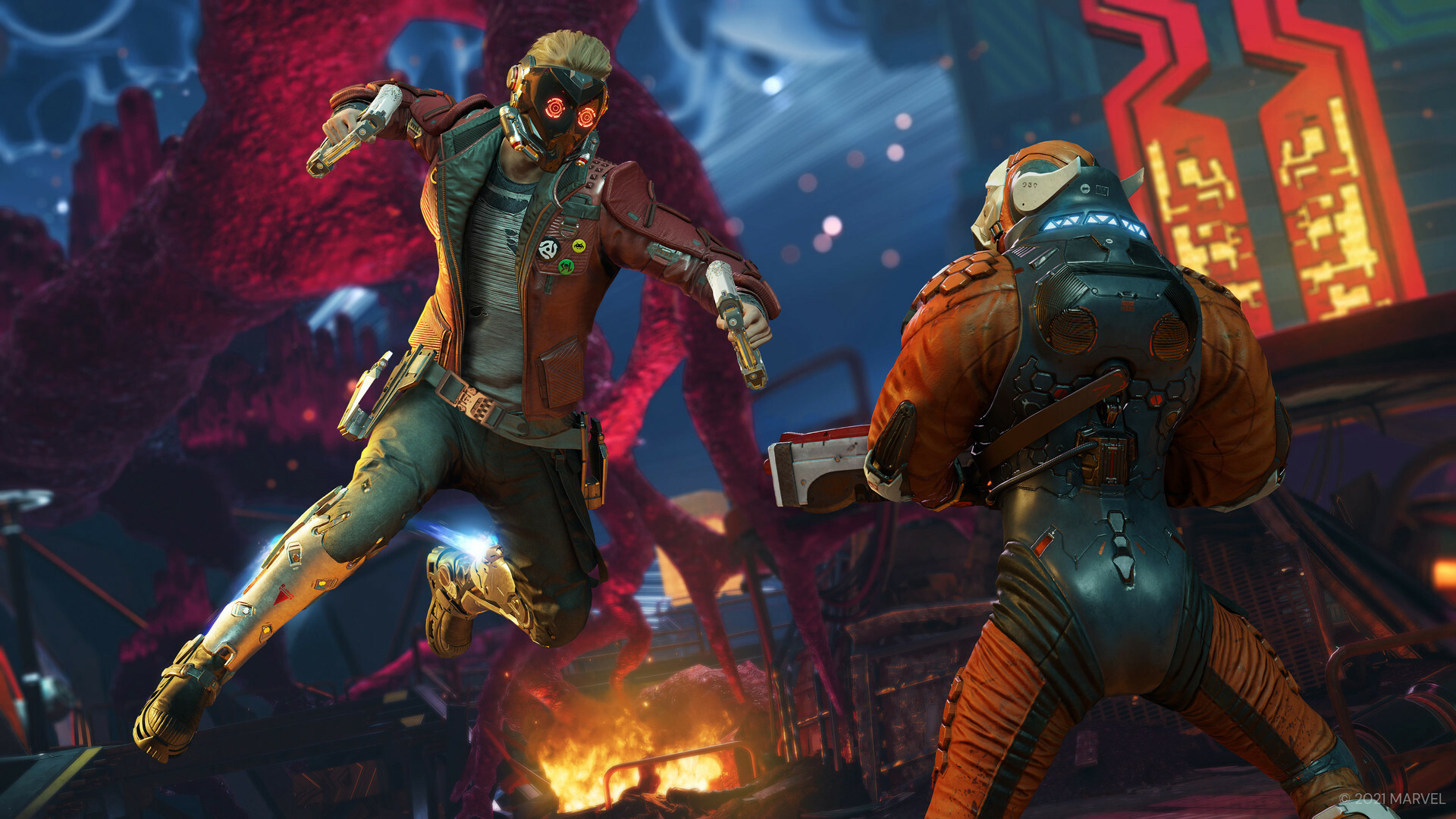 Five members make up the Guardians of the Galaxy, but you’ll only play as Star-Lord throughout the campaign. When engaged in battle, Star-Lord can whip out his trademark element guns to deal damage with blaster fire, use his jet boots to maneuver around enemies and close the distance with melee attacks. Where Guardians of the Galaxy gets interesting though, is in how Star-Lord can issue commands to his team, which allow for various combos to be executed in the heat of battle.

As seen in gameplay trailers, the team-based combat allows for a well-oiled unit that plays to their various strengths. Gamora has a conservative approach to facing enemies, Drax takes on as many as he can, and Rocket sticks to the rear while providing covering fire. Successfully completing a battle rewards players with experience and ultimately ability points, which can be used to unlock new skills for the team. There’s even an ultimate morale boost that can be performed once you have enough momentum, as Star-Lord calls the team together for a pep talk.

Pay attention to your team’s gripes, rally them together for a final push when the odds are stacked against them, and you’ll be able to unleash them with increased damage and quicker ability cooldowns while a hit single from the 1980s plays in the background. 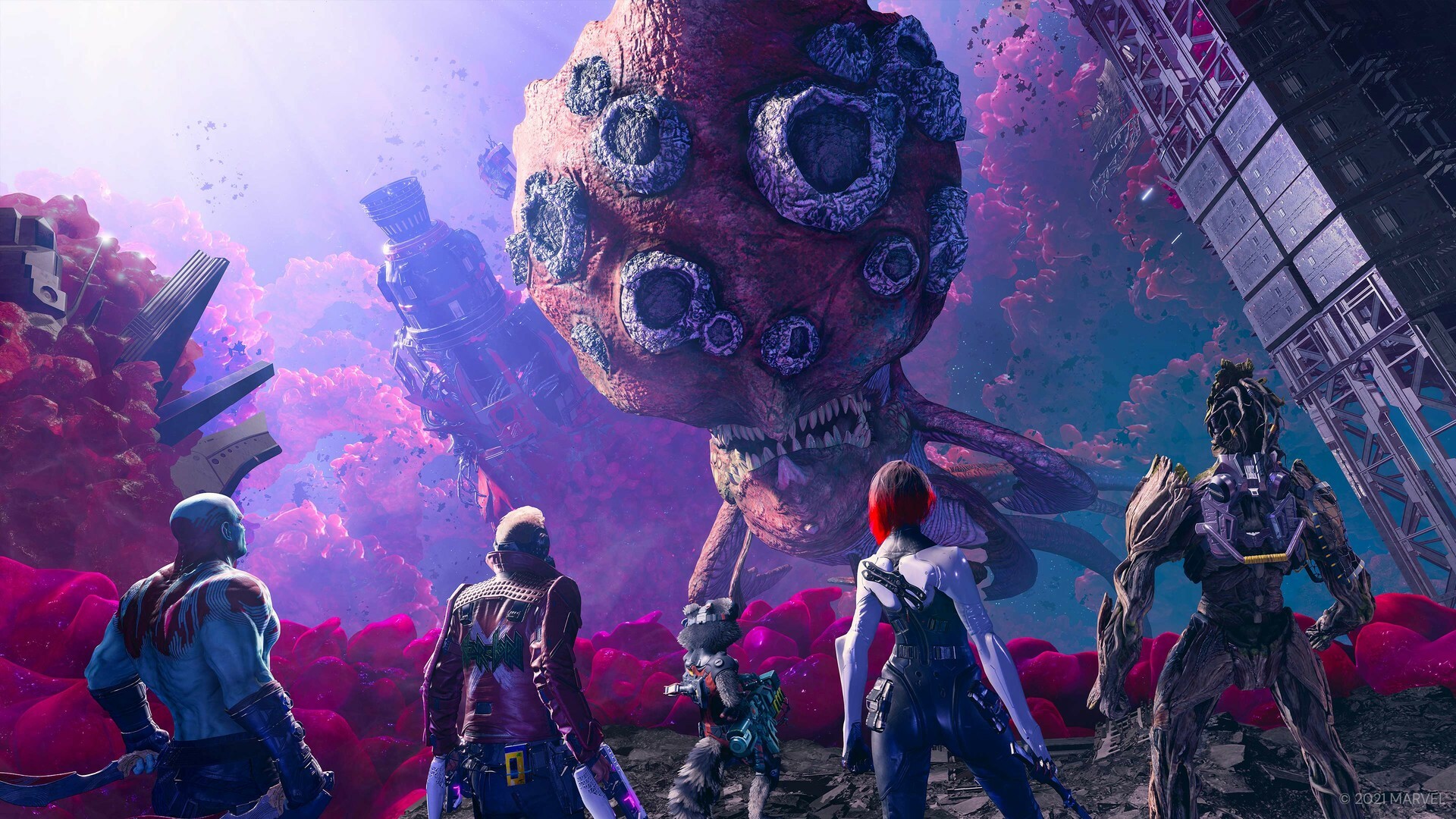 While blasting your way through hordes of intergalactic scum is unavoidable, one other major pillar of gameplay in Guardians of the Galaxy is its narrative and the choices you’ll make during the campaign. Multiple dialogue options during exploration and even combat can have an impact, while other major moments in the story will have ramifications down the line. Choices have consequences, with one notable example being when the Guardians attempt to pull a con on Lady Hellbender by selling her either Groot or Rocket as a potential monster for her collection. Whichever character you go with, will have an effect on how the story plays out.

As for other moments that will be discovered when the game arrives, it remains to be seen just how impactful your decisions will be in the grand scheme of things.

Is Guardians Of The Galaxy A Live Service Game? 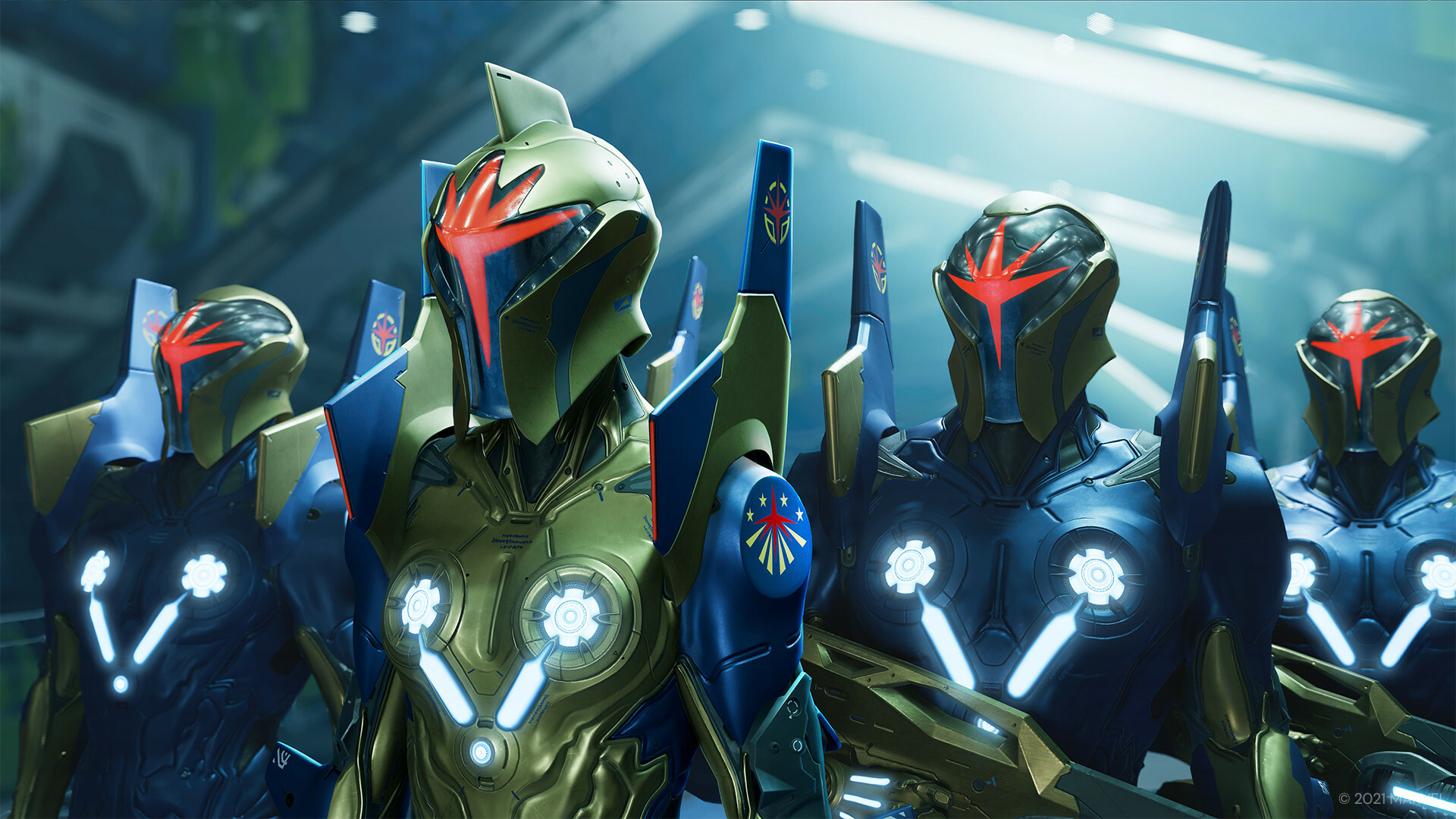 Nope! For anyone dreading the appearance of a season pass, the good news is that Eidos Montreal has focused on creating a game that’s a pure single-player and offline narrative-based experience. It’s a move that has been met with positive reception, especially in light of last year’s Marvel’s Avengers which went along that route

According to a recent update on Steam, Guardians of the Galaxy is going to gobble a sizable amount of space on your hard drive. Square Enix is recommending an SSD, and you’ll need to dedicate around 150 gigabytes of space to get the game running at its visual best. Before you panic, that number is only for the installation of the game, which will occupy a more moderate size of 32 GB once you’re done downloading it. For system requirements, Square Enix recommends the following setups:

Guardians of the Galaxy is somewhat unique for the approach it has taken in the audio department, as not only does it have a traditional orchestral score and a licensed awesome mix of 1980s chart-toppers, it also features an original rock album created just for the game. While you’ll have to wait for the game to release before you can start listening to its classical themes or original heavy metal guitar solos from Peter Quill’s beloved Star Lord band, you can listen to the licensed soundtrack and convince your parents that you’ve finally unlocked a good taste in music. 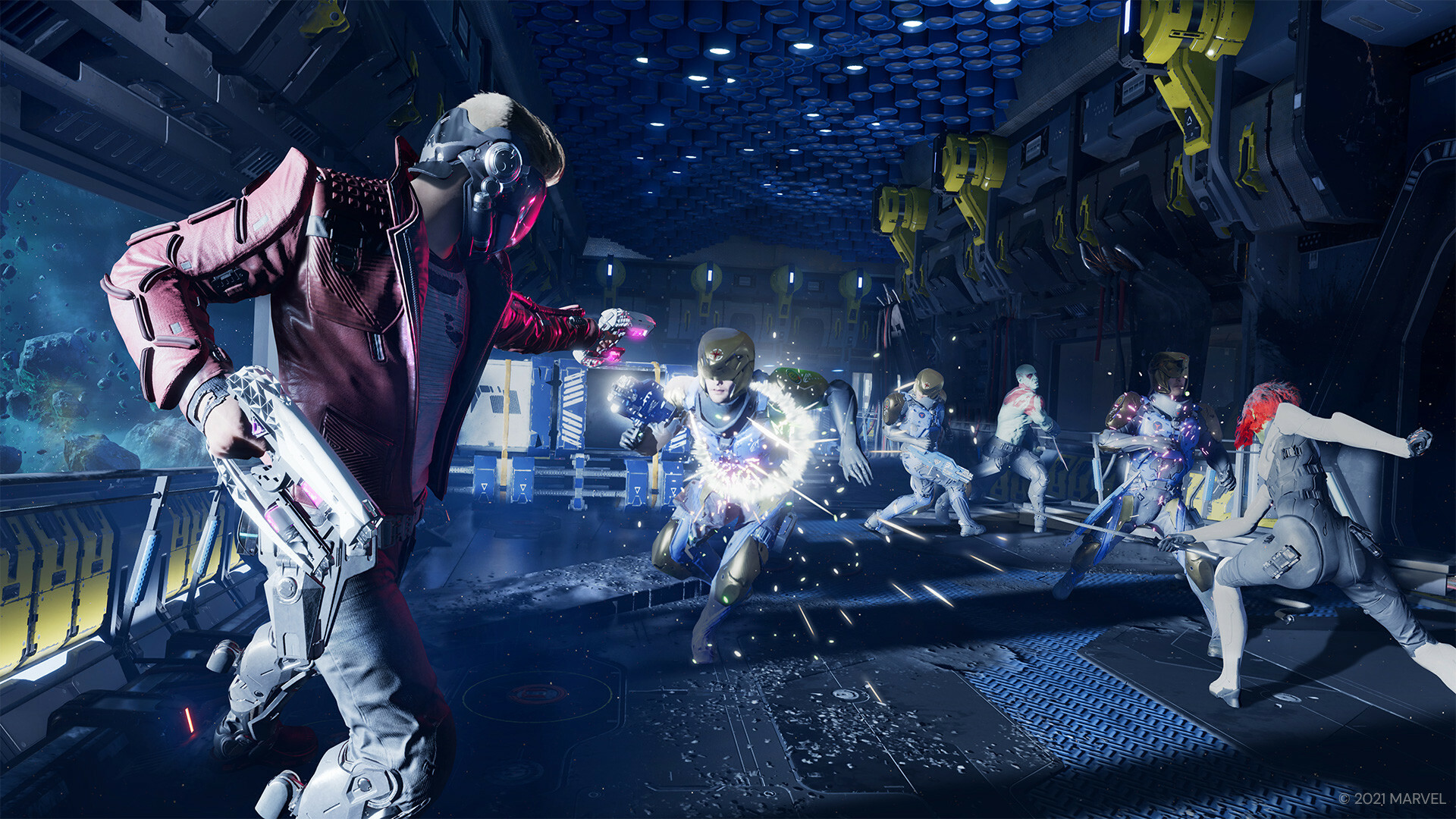 It wouldn’t be a Marvel game if Guardians of the Galaxy didn’t reference its own history with collectible costumes, and there’ll be an intergalactic wardrobe that you can dip into when those outfits have been discovered inside of the game. A few of these costumes will also be available as preorder bonuses, and include a more traditional set of threads from a more vintage era of cosmic adventures, as well as outfits based on modern appearances of the team.

A regular preorder will earn you the Throwback Guardians outfit set, which features Star Lord in his Annihilation military uniform, Groot in his 2014 cinematic skin, and Drax in his comic book accurate costume that he wore for decades after his first appearance. The digital deluxe version of the game has Star Lord’s Sun and City Lord costumes, which will also be available in the physical deluxe edition.

You won’t have to wait too long to start assembling your favorite gang of escaped Kree experiments and deadly assassins. The game arrives on October 26 for Xbox Series X, Xbox One, PS5, PS4, and PC, and for more details, you can check out our Guardians of the Galaxy preorder page to see all the retailer bonuses that’ll be available.