Sonic Colors: Ultimate is the upcoming remaster for the original 2010 game on Nintendo Wii. While modern Sonic games have been hit or miss, Sonic Colors was warmly regarded by critics and fans alike. It offers a solid and stylish blend of classic 2D platforming and 3D action with the use of the game’s Wisps–special assist characters that help Sonic throughout the level. With the remaster of Sonic Colors: Ultimate release on September 7, we’ve seen more gameplay pop up.

For GameSpot’s Play For All, we have an exclusive gameplay video showcasing an update of the original Sweet Mountain world, a series of stages that look like an explorable land filled with candy and junk food. The world was a challenging and visually stunning setting in the original game, and it’s since been updated in the new remaster, giving it much sharper visuals. The new footage looks great, and it captures what made the original Sonic Colors such a well-loved game within the Sonic fanbase. Just for this reveal, we also had a chance to chat with Sega producer Calvin Vu about the making of Sonic Colors: Ultimate.

Sonic Colors: Ultimate is something of a cult favorite among fans. What was it like to revisit this game that found an audience on the Nintendo Wii, and revitalize it for modern audiences?

It’s been an amazing experience revisiting Colors. Since it was originally designed for the Wii, we’ve done quite a bit of tinkering to reimagine the gameplay experience for new consoles and PC for more of our fans to enjoy. We spent a lot of time bringing it up to the high-definition quality of today, supporting resolutions up to 4K on capable platforms, and working on several aspects of the game, including improved lighting and visuals, enhanced textures, remixed audio, and overall refined gameplay elements. We’ve worked incredibly hard to make Sonic Colors: Ultimate the best version of the game that it could be, and we can’t wait for our new and returning fans to experience it first-hand in September.

What do you think Sonic Colors offered that made it different from other modern Sonic games, and why do you think it’s still held in such high regard from Sonic fans?

Sonic Colors was one of several Nintendo exclusives developed by Sonic Team during the Wii/Wii U era, which was an exciting time for SEGA creatively. With the Wii we were able to introduce an all-new style of gameplay at the time that utilized Nintendo’s technology that encouraged players to stand up while playing the game. Fans were incredibly receptive to the interactive elements of Colors and created lots of fun memories with family and friends playing the title on Wii.

Colors also introduced Wisps and Color Powers to Sonic, which was a major gameplay addition for the series that fans enjoyed. We’re super excited to bring Colors to current platforms to share these creative gameplay elements for all types of players.

Along with the remastered presentation, can you talk about what sort of new content is coming to this game that sets it apart from the original?

There are quite a few gameplay improvements that really make this feel like the ultimate version of Sonic Colors. We’ve added a new wisp to the game, the Jade Ghost. This wisp’s Color Power allows Sonic fly around as a ghost and phase through objects when using his homing attack and reach new areas. There’s also the “sweet spot attack,” a new mechanic that rewards Sonic when he perfectly times his attacks with bonus boost energy. There are new customization options for Sonic. Players can collect Park Tokens they find throughout the game and exchange them to unlock different shoes, gloves, boosts, and auras to change how Sonic looks. We’ve also added a new feature called “Rival Rush” where players can race against Metal Sonic in select acts throughout the worlds. 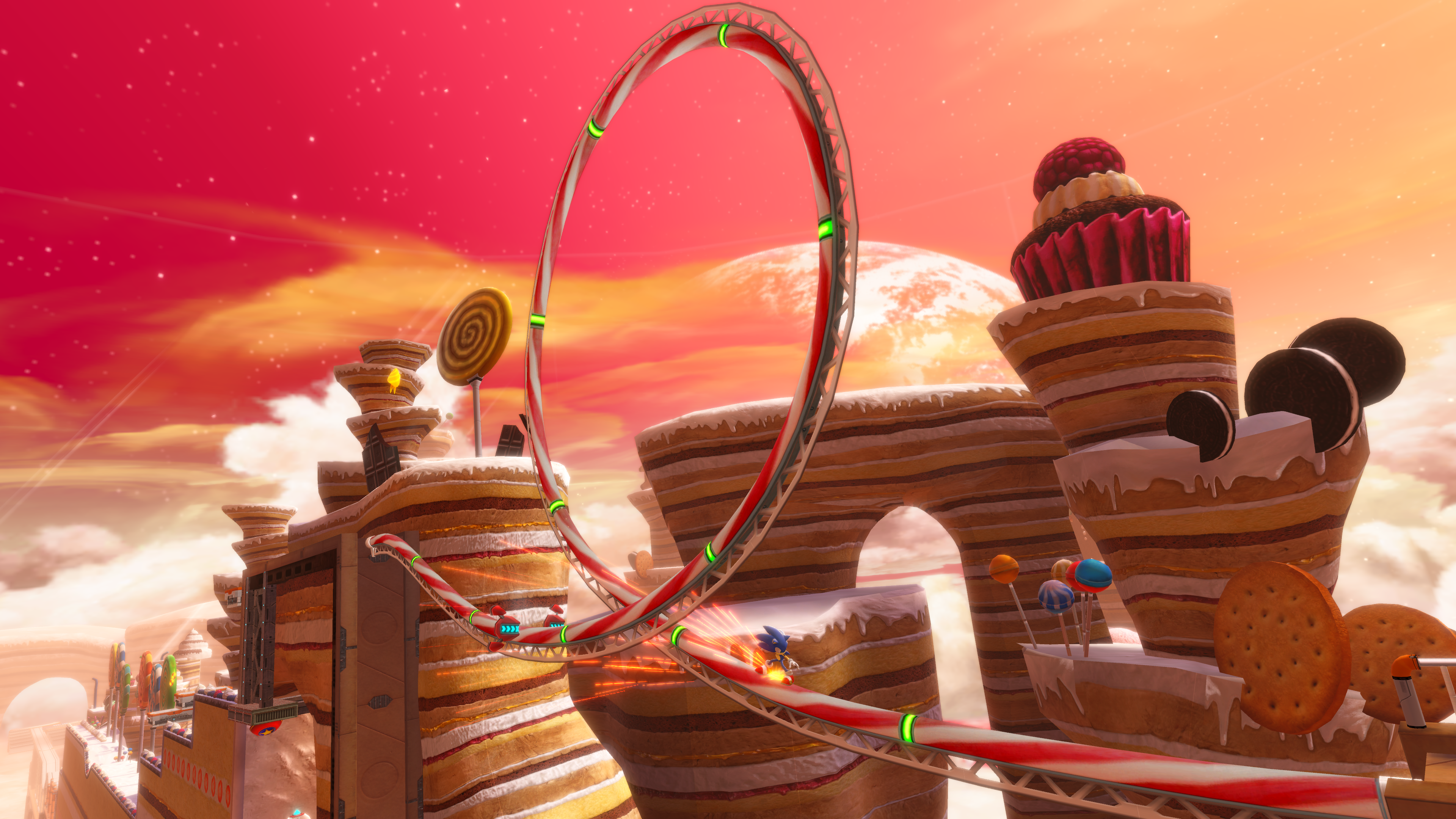 The original Sonic Colors also had a spinoff game on the Nintendo DS, which had its own set of levels and story. Was there any consideration from the early stages of this project to revisit that game as well?

We mainly focused on remastering the Nintendo Wii version of Sonic Colors. It was a great game on that platform that we felt the need to modernize for the more powerful platforms we have today and reach more players. However, many of the fan-favorite environments from the Wii also appeared on the Nintendo DS version, such as the Sweet Mountain level and Aquarium Park, which fans can rediscover in Sonic Colors: Ultimate.

Sega is also working with the dev Blind Squirrel Games on Sonic Colors: Ultimate, who have had experience porting and remastering other classic games. What was it like working with them on this project?

It’s been amazing to work with Blind Squirrel Games on Sonic Colors: Ultimate. They’re experts in their craft and were able to help achieve our shared vision for the remaster. With Blind Squirrel, we were able to bring a fresh hue to some of Colors’ most beloved environments and retain the great gameplay elements in a way that will ring true to longtime fans while delivering improved gameplay enhancements for current-generation platforms.