Pokemon Brilliant Diamond and Shining Pearl are remakes of the Gen-4 Pokemon games, with some modern quality-of-life tweaks and enhancements. That means they’re a unique mixture of new and old, so if you’re an old-school Pokemon trainer or you cut your teeth on Sword and Shield, you may be surprised by some of the mechanics and conventions present in these remakes. Read on for tips on how to get started in Pokemon Brilliant Diamond and Shining Pearl. 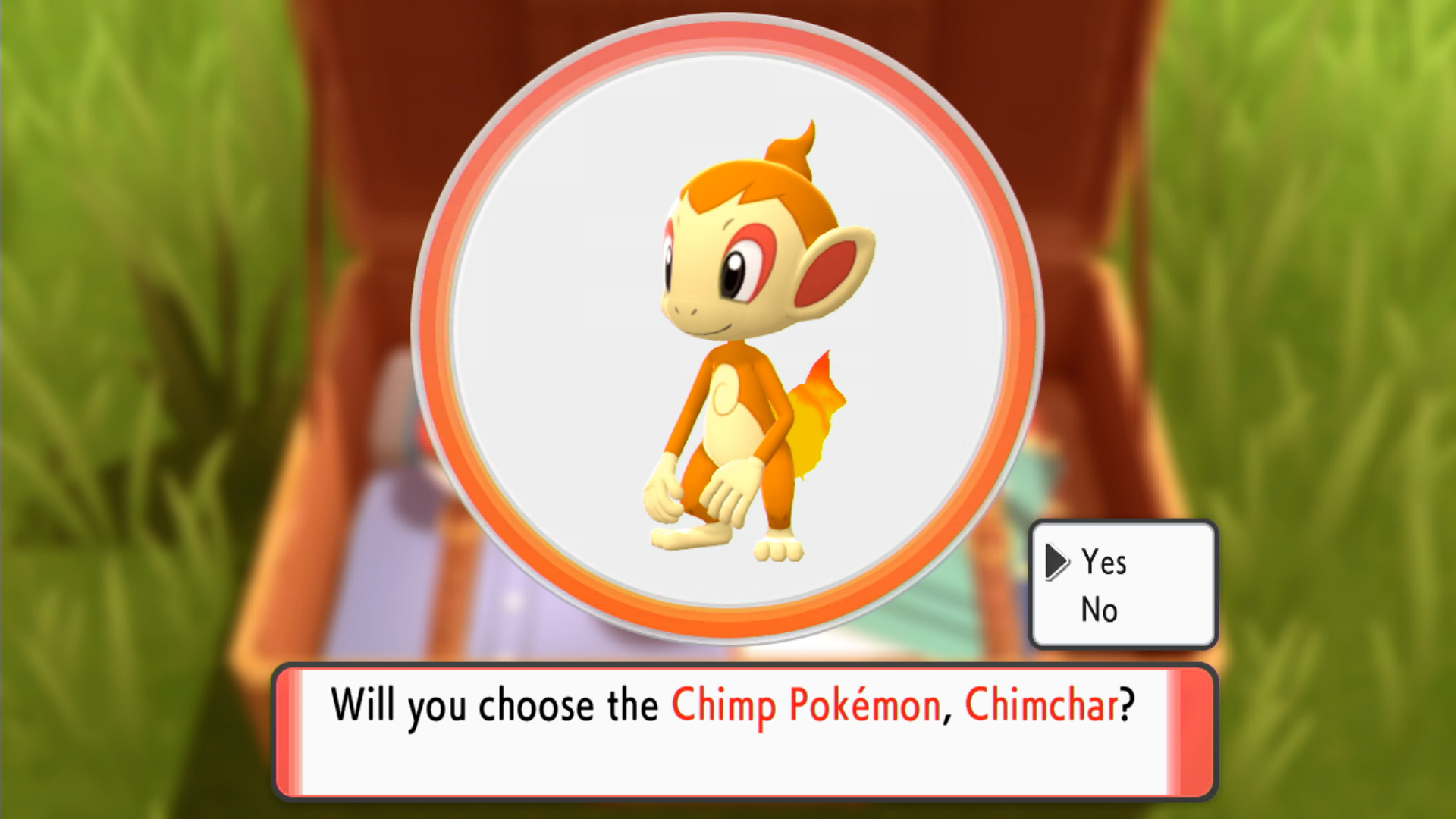 The classic tradition of choosing from a Fire, Water, or Grass starter is back once again in Brilliant Diamond and Shining Pearl, but the composition of dungeons and gyms has a big impact on your selection. If you want a much easier time, choose Chimchar, the Fire-based monkey Pokemon. Its combination of Fire- and Fighting-type moves will remain useful throughout almost the entire game, with only a few exceptions when you’re faced with Water-based areas. The other two are relatively evenly matched, but Turtwig is the slight favorite for the hardest experience of the three.

Any of them will have their usefulness and of course, you can always catch and train up other Pokemon to fill in any gaps or weaknesses on your team. But if you want to essentially play Brilliant Diamond and Shining Pearl on easy mode, choose Chimchar.

Get your free rare Mew and Jirachi 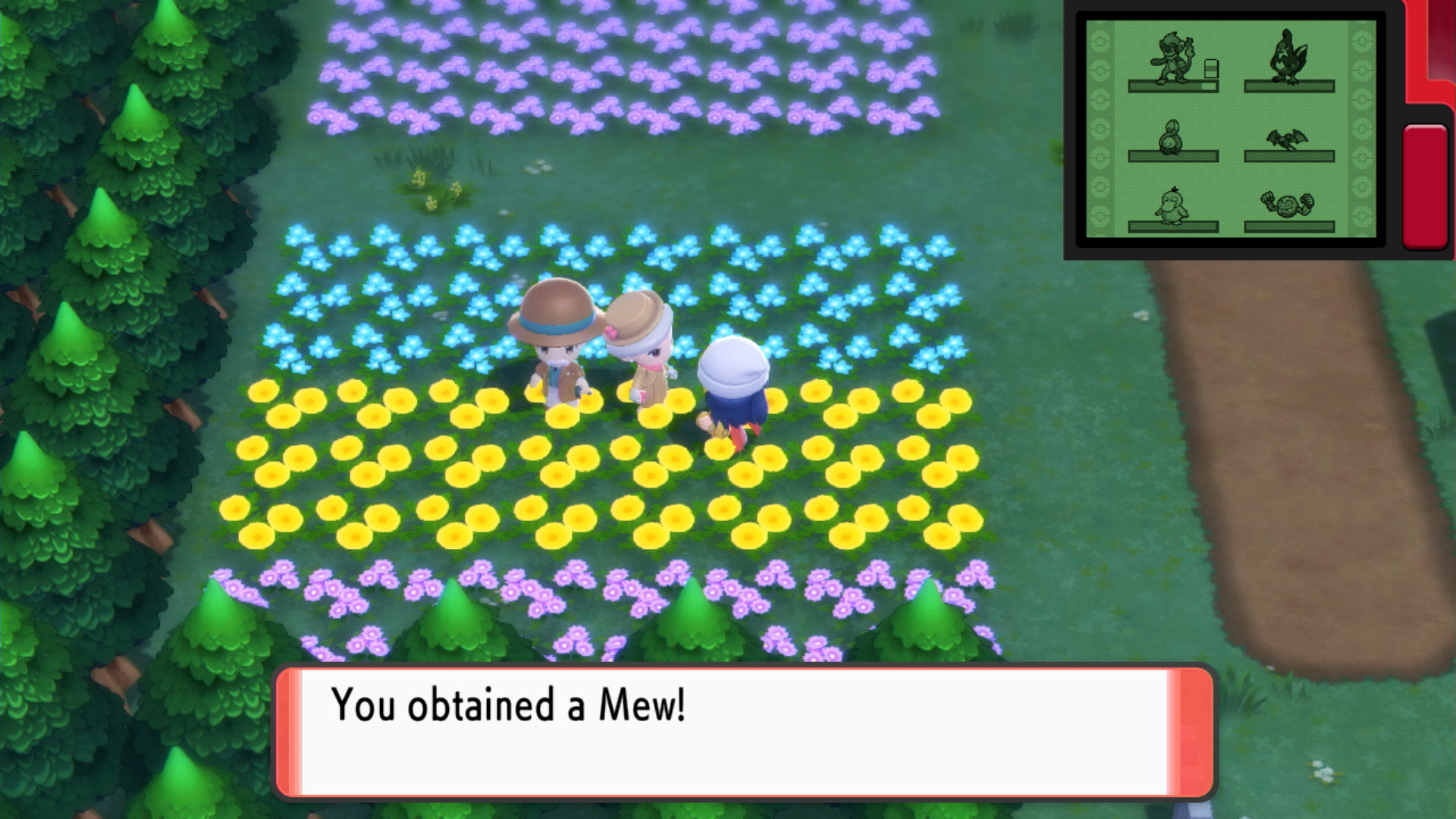 Once upon a time Mew was among the rarest of all Pokemon, only available through special giveaways or nefarious game cheats. Nowadays, Nintendo hands out the adorable little psychic cat a lot more readily, and Brilliant Diamond and Shining Pearl are no exception. You can claim the mythical Mew and Jirachi by simply having save data from Pokemon Sword/Shield and Pokemon Let’s Go. Sword and Shield saves grant you a Jirachi, while Let’s Go save data will give you Mew.

You can access both of them fairly early, though not right at the beginning. When you reach Floaroma town, you’ll see an elderly couple standing together in a field of flowers to the left of the entrance. Talk to each of them to receive your two free Pokemon. 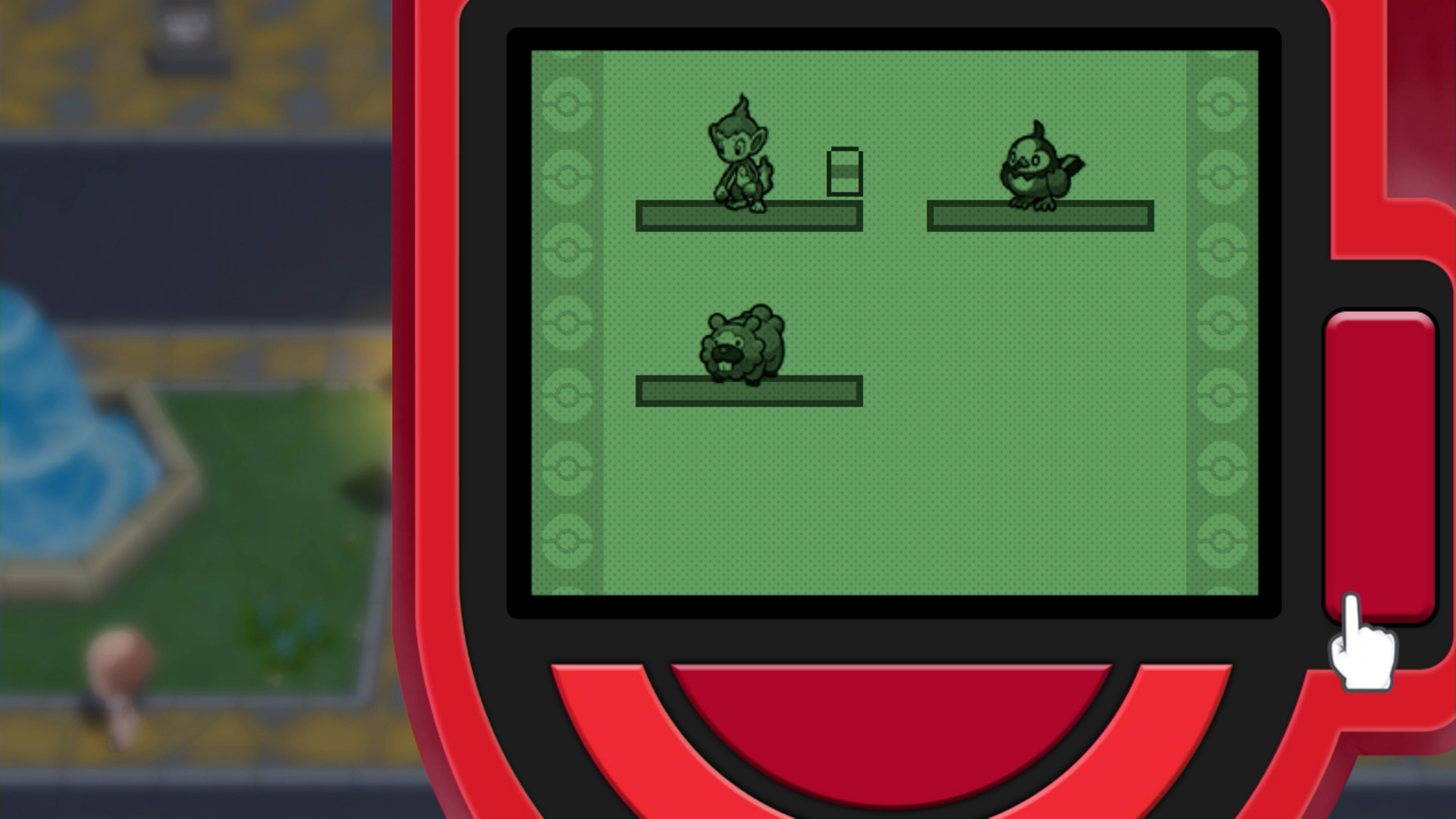 The Poketch is your all-purpose Sinnoh smart device, complete with functions you’ll never use like a calculator. But it’s also your shortcut key to Hidden Machine functions. Most of those will trigger automatically when you come to a tree branch that can be Cut or a body of water that can be Surfed, and the Fly function will automatically trigger when using your map and indicating a town you’d like to travel to–as long as you’ve been there before. You can also prompt the Fly or any other Hidden Machines from the Poketch, but it’s not strictly necessary. Since other functions like the pedometer aren’t super useful, you may just want to hold R to dismiss it rather than have a giant block taking up your screen.

Grind in the Grand Underground 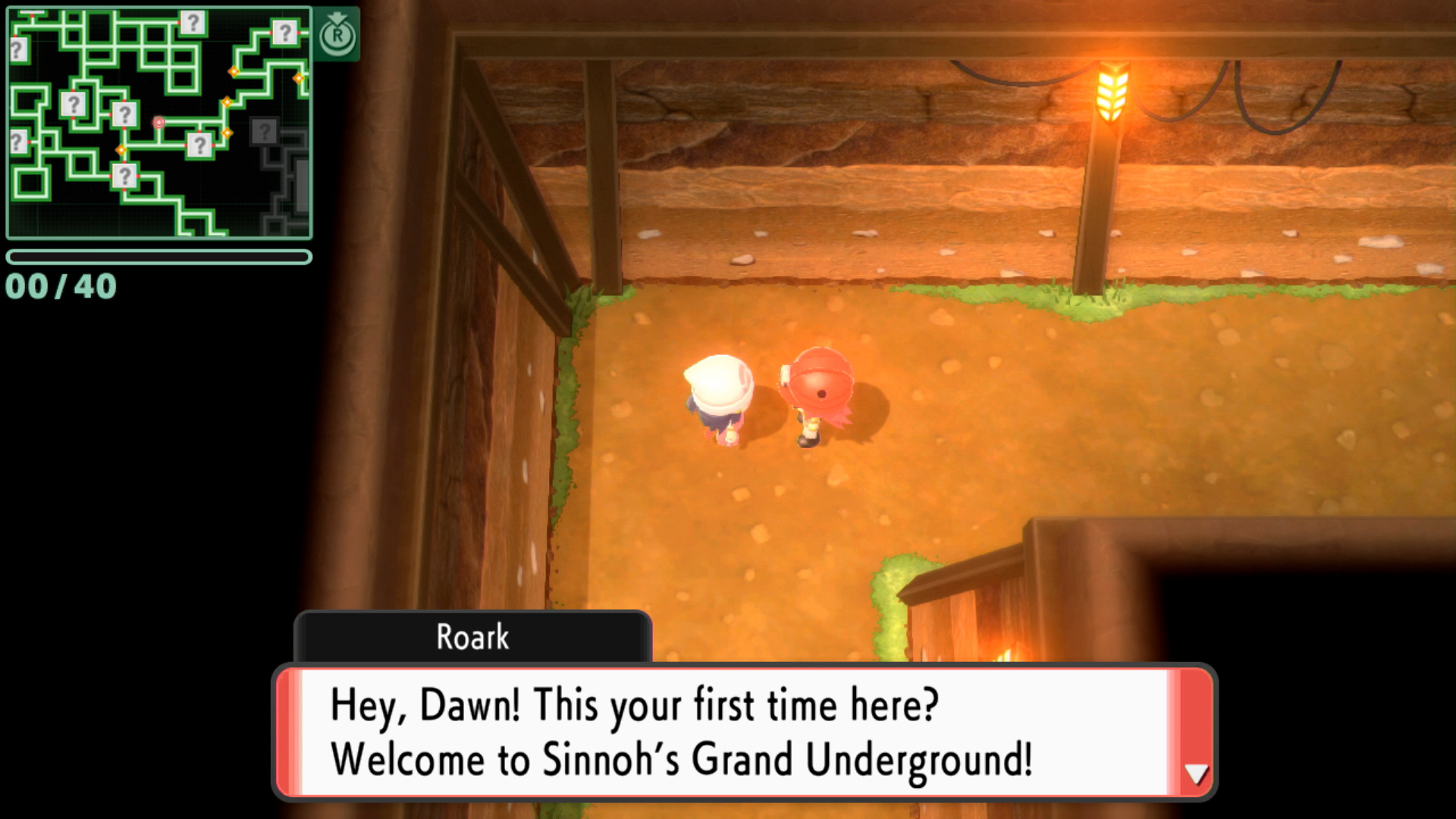 At some point during your adventure, chances are you’ll need to buff your Pokemon. You could roam around the tall grass for a while but after a few minutes you’ll probably have caught just about everything you can from there. Instead, consider visiting the Grand Underground. It opens up once you’ve reached Eterna City and spoken to the Underground Man in the house next to the Pokemon Center, and after that point you can drop down anytime by using the Explorer Kit. The Pokemon in the Grand Underground will consistently keep approximate pace with your level, making them appropriate for grinding. Better yet, the Grand Underground is chock full of Pokemon you can’t find anywhere else, so it’s super helpful if you’re looking for a rare find or just want to catch ’em all. 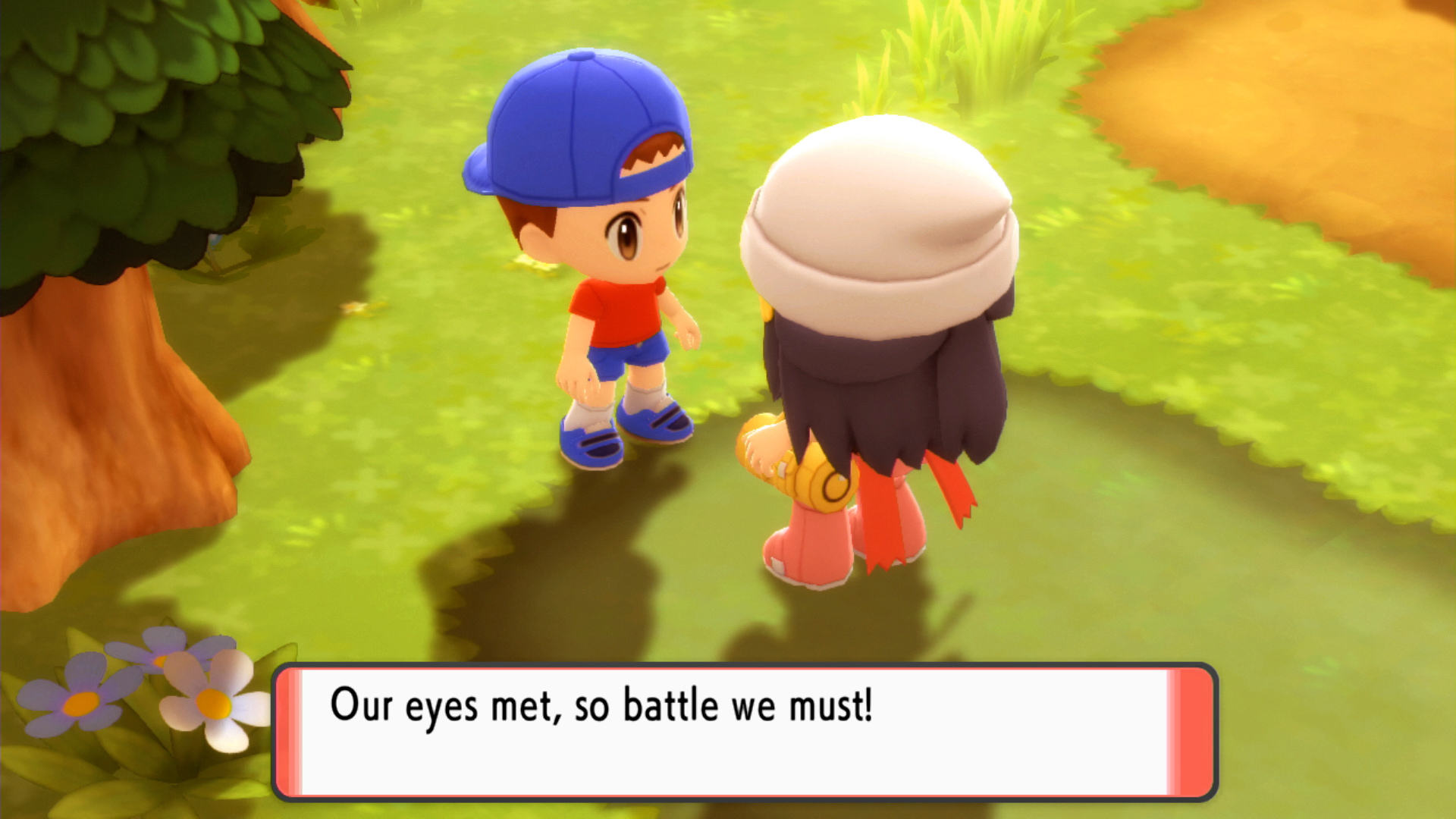 When wandering the world you’ll often find trainers itching to do battle with you. While you can feel free to go around them if you’re in need of healing and just need to move on, don’t skip them too often. Battling other trainers nets you more experience than wild Pokemon battles, and the game is generally balanced assuming you’ll be engaging with all or at least most of the trainers scattered around the world. If you skip too many you’ll just have to go back and battle them or grind. 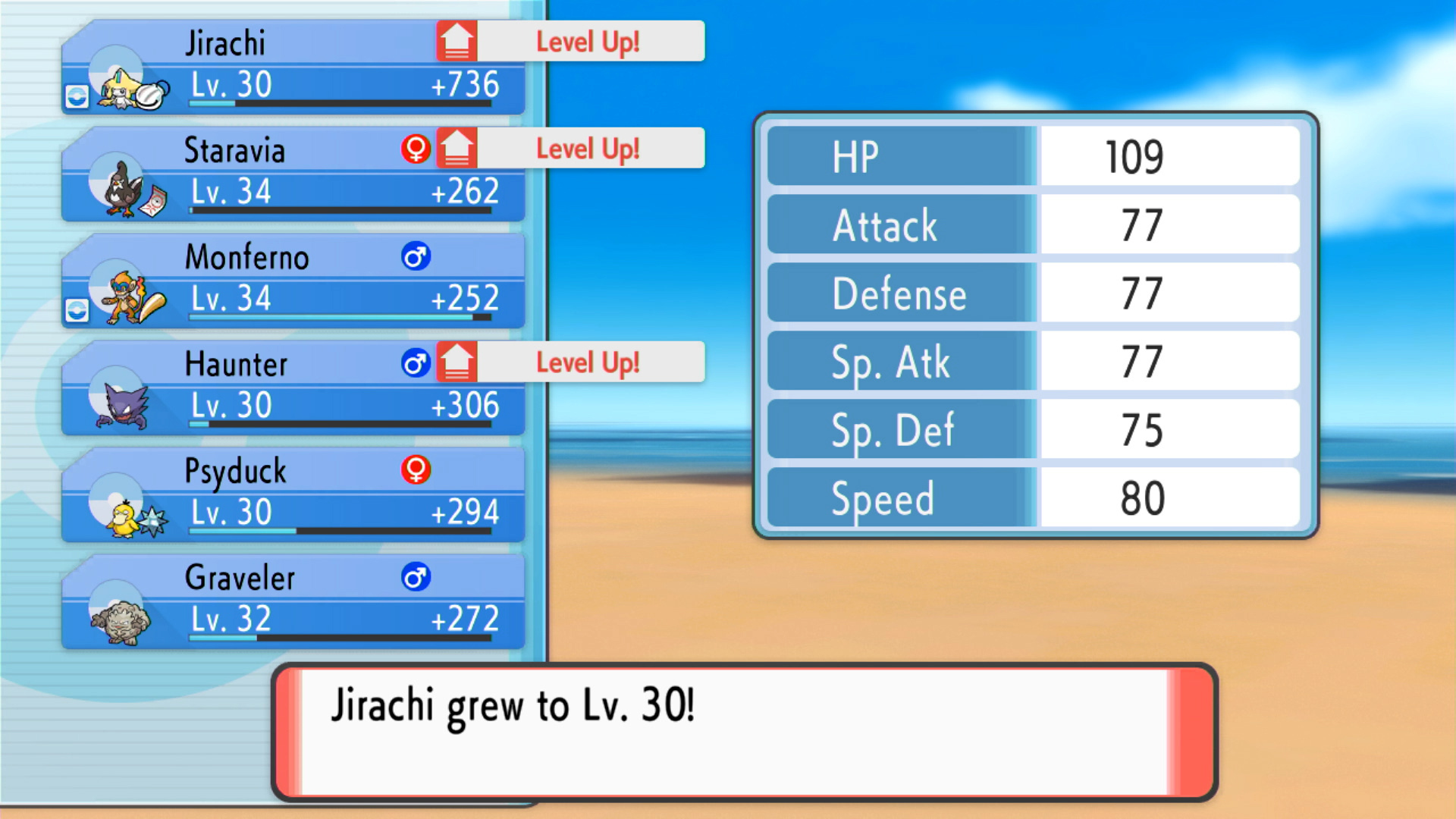 Through most of Pokemon history, EXP Share has been a toggle and usually only applied to one Pokemon. In Sword and Shield, and now in Brilliant Diamond and Shining Pearl, it’s on by default, can’t be turned off, and impacts your whole party. So even if you’re using one Pokemon as your main, be sure to bring party members along who could benefit from getting the extra experience. One good example is Magikarp, which you can catch relatively early with a fishing pole. But Magikarp by itself is mostly useless, which usually meant it was hard or tedious to level it up. The EXP Share in Brilliant Diamond or Shining Pearl will let you passively grind it up to level 20, at which point it becomes the much more powerful Gyrados.

Speed up your battles in Settings 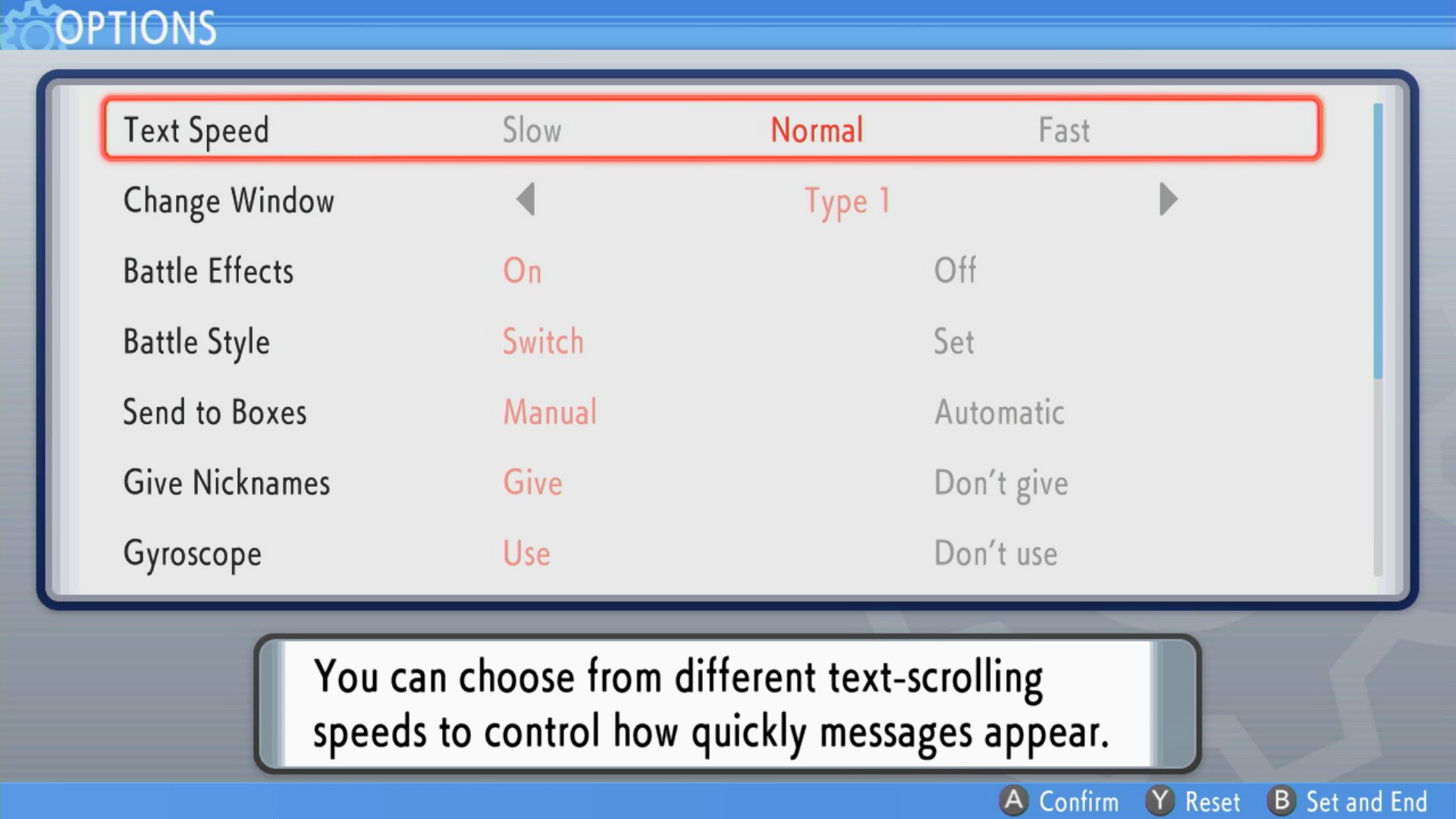 Pokemon is known for many things, but quick snappy battles is not one of them. If you want to make your battles just a little bit quicker, you can toggle some of the settings in the Options menu. You can turn off battle animations and the prompt to nickname your newly-caught Pokemon, as well as adjust the text speed, if you want things to move along a little faster. You can also toggle off the prompt to change Pokemon when your opponent switches, which is also a time-saver but could put you at a strategic disadvantage for type matchups. And speaking of type matchups… 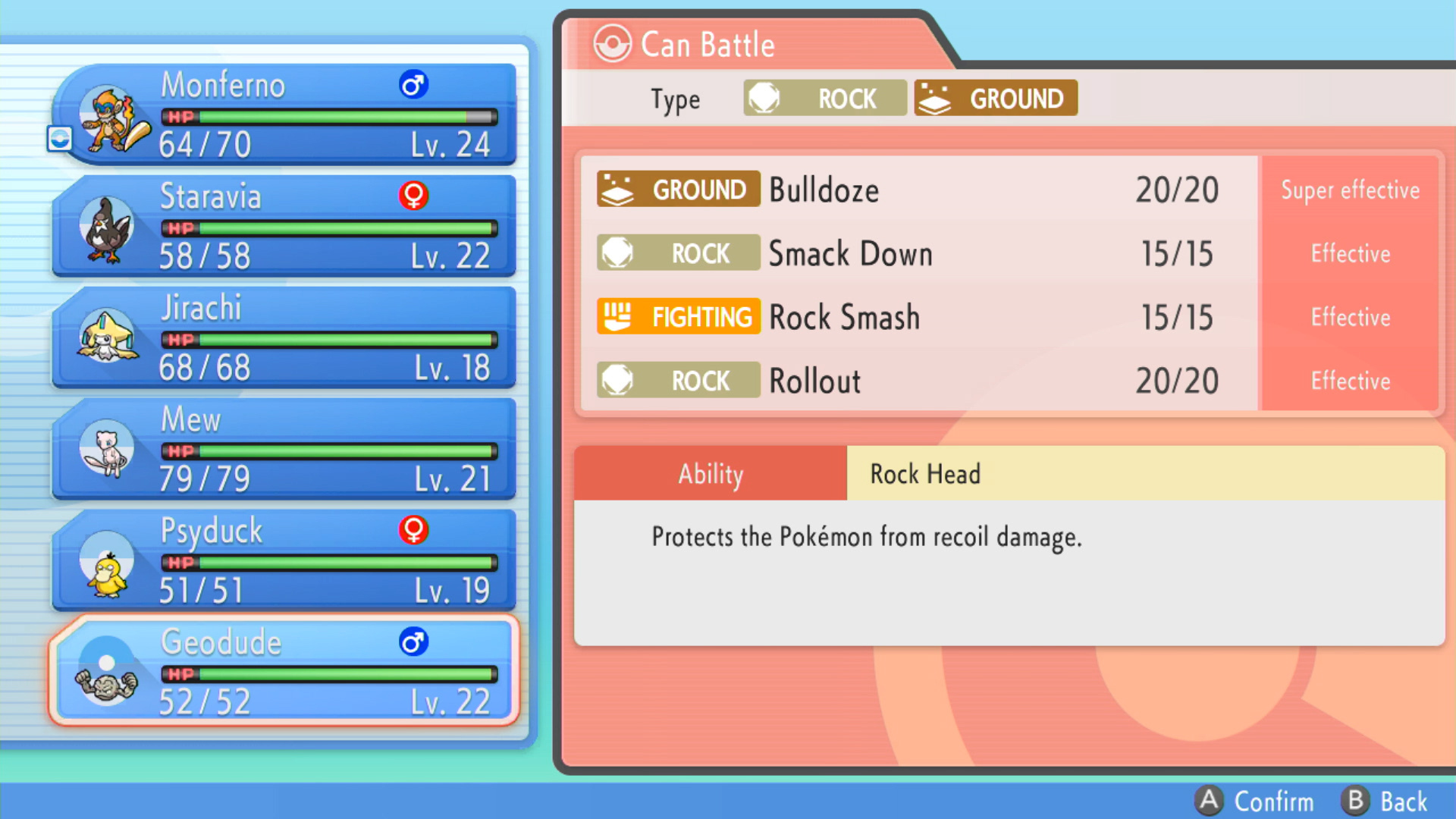 When you go to switch your Pokemon mid-battle, you’ll see their moves listed along the right side. This can be vitally helpful, because if you’ve encountered a Pokemon before and had them added to your Pokedex, this menu also lists the effectiveness of each move against your current opponent Pokemon. They’ll be listed as No Effect, Not Very Effective, Effective, or Super Effective. This can be handy for planning out your next move. 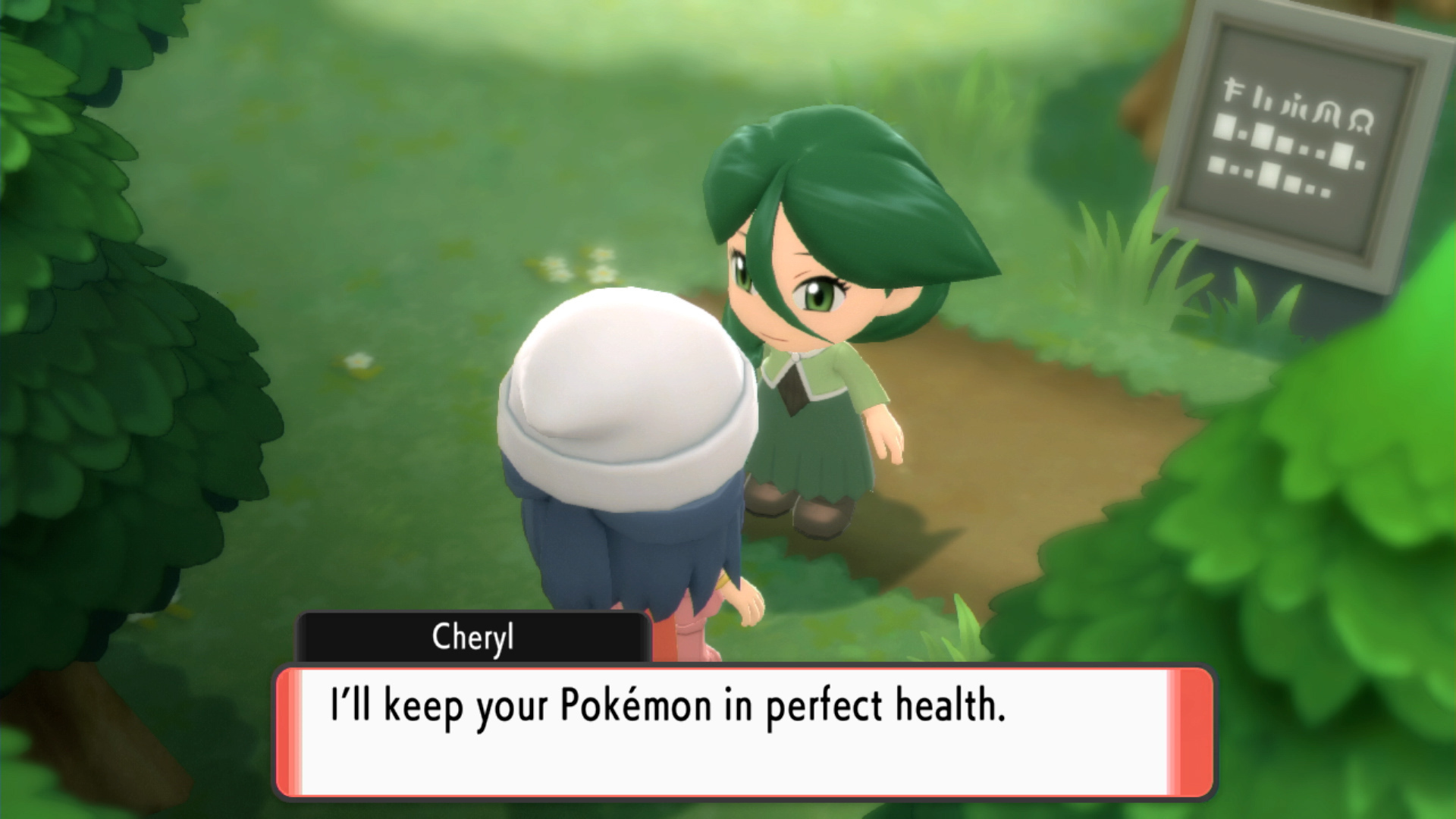 A few times throughout Brilliant Diamond and Shining Pearl, you’ll get temporarily partnered up with an NPC. This happens early in the woods, when you’re partnered with a friend who will help keep your Pokemon healthy in the woods. Take advantage of this by grinding a little extra in the area, since having that access to constant healing means you won’t have to venture back to town to stay healthy. 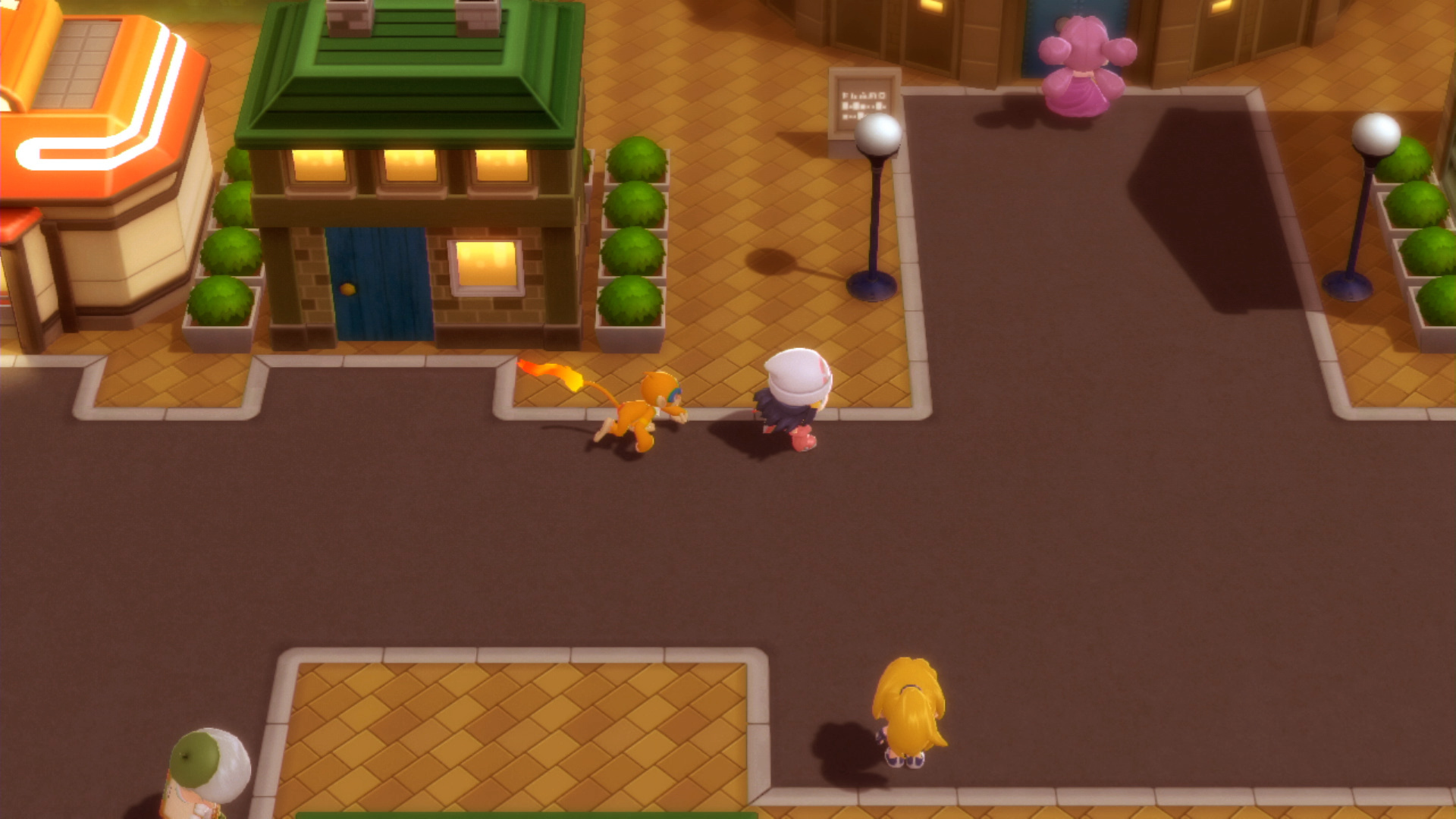 Like some later Pokemon games, you can select one special little monster to follow you around the overworld. Just visit Amity Park in Hearthome to unlock the function, and then swap your following Pokemon by selecting “Walk together” after selecting a Pokemon in your party. You can talk to your Pokemon from time to time, and sometimes it will have found random low-level items. It also gives it a slight passive boost in combat, and once your bond is strong enough you’ll see prompts in combat noting that it might have dodged an attack or kept from fainting due to its friendship with you.

Make use of the PC Box 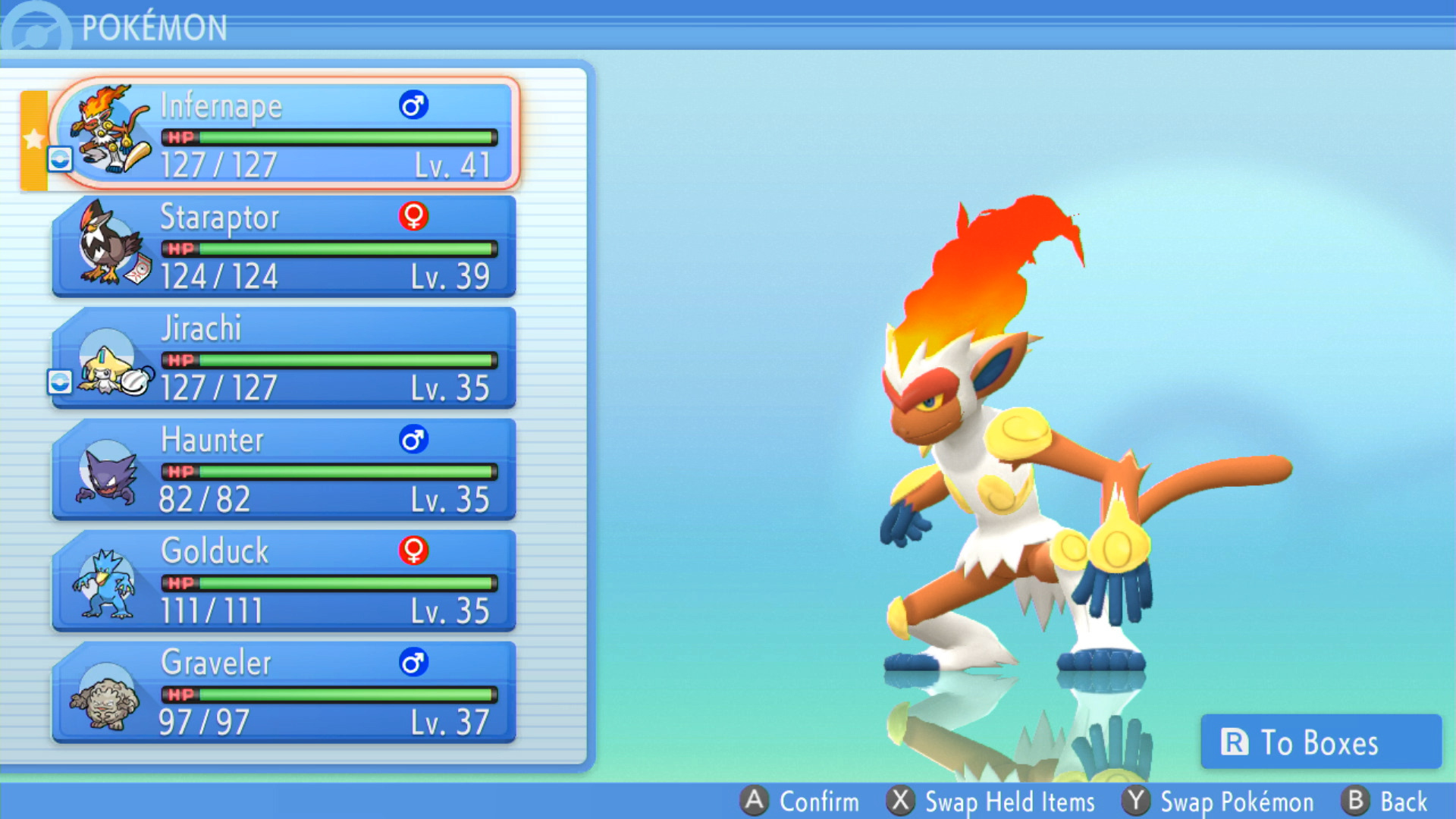 In the original Diamond and Pearl, as well as most early Pokemon games, you had to venture back to town and visit a Pokemon Center to use a PC that would let you swap your current party with your batch of stored Pokemon. Now it’s much simpler, because you can simply access the PC box and swap them out anytime, from anywhere. That means if you’re out wandering the wilderness or the Grand Underground and you want to level up a different set of monsters, it’s easy to simply switch them out and keep playing without the time spent going back to town.

Be sure to hold items 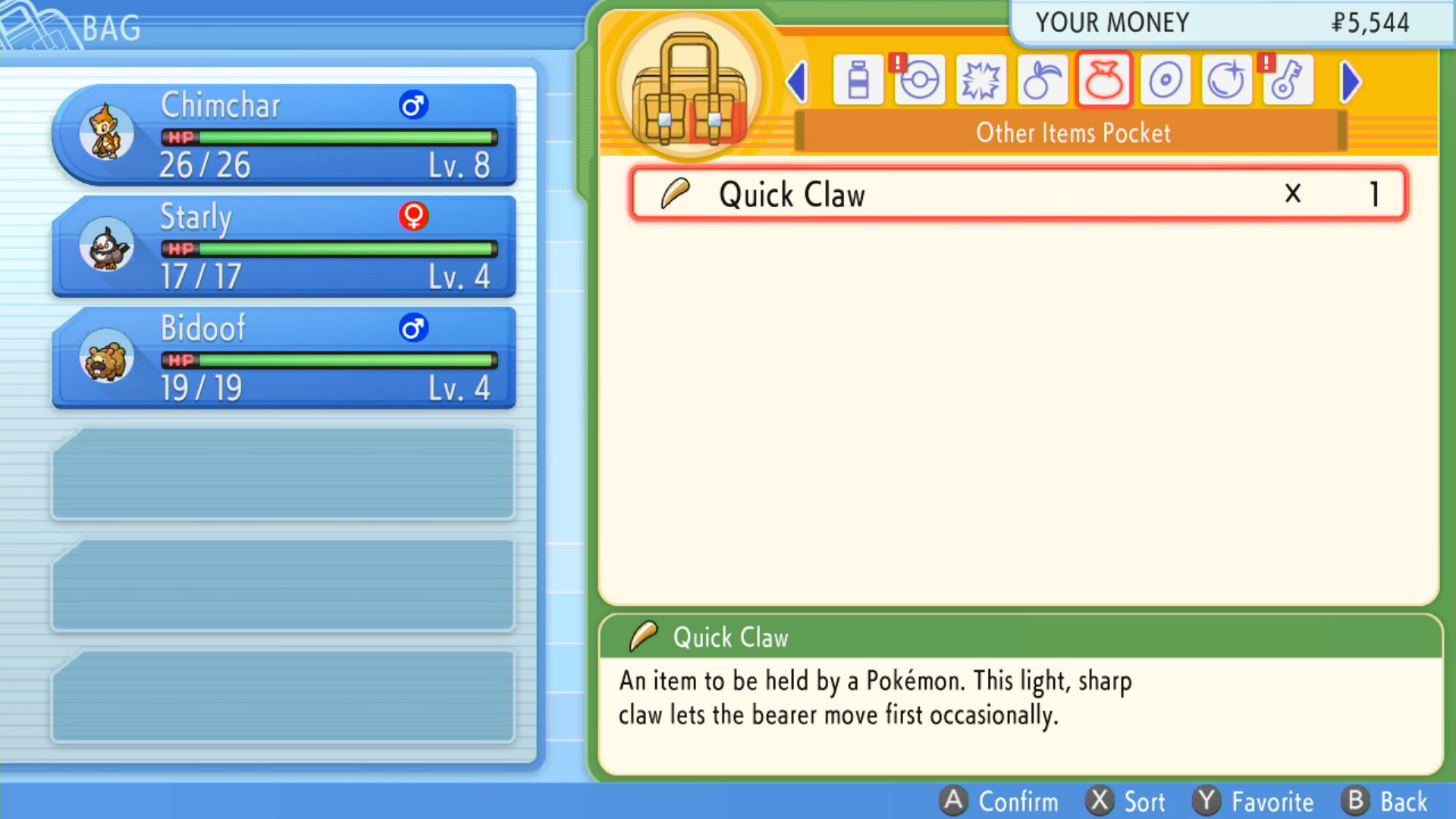 The Held Items mechanic lets you give your Pokemon passive buffs or emergency healing opportunities. While those are great for battle, even holding an item that doesn’t have utility in battle will help it become happier. What’s more, some Pokemon only level up by holding items, so it’s best to keep your party fully stocked with items regardless.

For more, check out our Pokemon Brilliant Diamond and Shining Pearl review-in-progress.