Save $60 on Two Pack of the Ripper Snow Helmet Audio System!

Death’s Door is just oozing with atmosphere, its visuals, soundtrack, and storytelling all working in tandem to construct an experience that I enjoy so far. There’s a distinctive melancholic stagnation to Death’s Door and every piece of the game seemingly upholds that feeling, creating an experience that feels very complete. It reminds me a lot of last year’s Hades (and not just because both games present death through the lens of a business office), in that everything in the game is working towards producing a specific vibe.

An isometric action game, Death’s Door sees you play as a young crow whose job to collect the souls of the dead hits a bit of a snag when an elderly crow steals the giant soul you were charged with collecting. In order to complete your assignment, you’ll need to find a way to get the giant soul back, sending you on an adventure across a world filled with folks seeking a means to avoid death.

Death’s Door has an enjoyable combat loop of slashing, dodging, and firing off magical arrows. Despite its appearance, Death’s Door is neither a roguelike nor Souls-like–when you die, you respawn at the last checkpoint with all your currency intact. So there’s no frustrating reset of your progress or tense journey back to where you died. Instead I fought my way through Death’s Door’s opening levels at a pretty steady pace, ensuring each environment or enemy I encountered didn’t become stale over time.

And I think all of that supports my original point: Death’s Door is an atmospheric adventure. And that atmosphere is preserved and appreciated because you’re constantly pushing forward–you’re seeing the world twist on itself and hearing the music from one area flow into the next. Plus, venturing into optional areas to find pieces of lore is more enticing when you know that dying isn’t a huge reset to your progress.

It’s a pretty intimate cast of characters in the opening hours too. Each stands out in their own unique way–my favorite is Pothead, a man cursed by a witch to have a pot of soup for a head. (He gives me major Dark Souls’ Siegmeyer vibes.) There’s not much dialogue in Death’s Door and the main character is a silent protagonist, but a remarkable amount of each character’s personality is conveyed via their body language. So even though I know very little about these characters’ histories, I love many of them. I can’t wait to see what else Death’s Door has in store.

After my two hours of hands-on playtime with Death’s Door, I reached out to programmer, writer, and animator Mark Foster and producer, designer, composer, and sound designer David Fenn to ask them about how the atmosphere for the game’s world was created. They emailed me back responses. Death’s Door is scheduled to launch for Xbox and PC on July 20.

I noticed the music for certain areas seems to fade into each other; they’re different but similar enough to sound like different parts of the same song–why structure the soundtrack to play out this way as opposed to making harder cuts in the music to further differentiate each individual track/location?

We wanted to give the world of Death’s Door a distinctive vibe throughout, so we went for a more unified soundtrack with a fairly consistent atmosphere, focusing on the feeling of melancholy and tiredness of a world stagnating without death and a lack of new life being born into it. There are also themes which are used for certain characters which are weaved into the areas of the world that those characters have had an impact on, so certain chapters might feel quite blended together for that reason. That said, we’re still pretty confident the soundtrack will take you to plenty of interesting places and bring a few surprises! 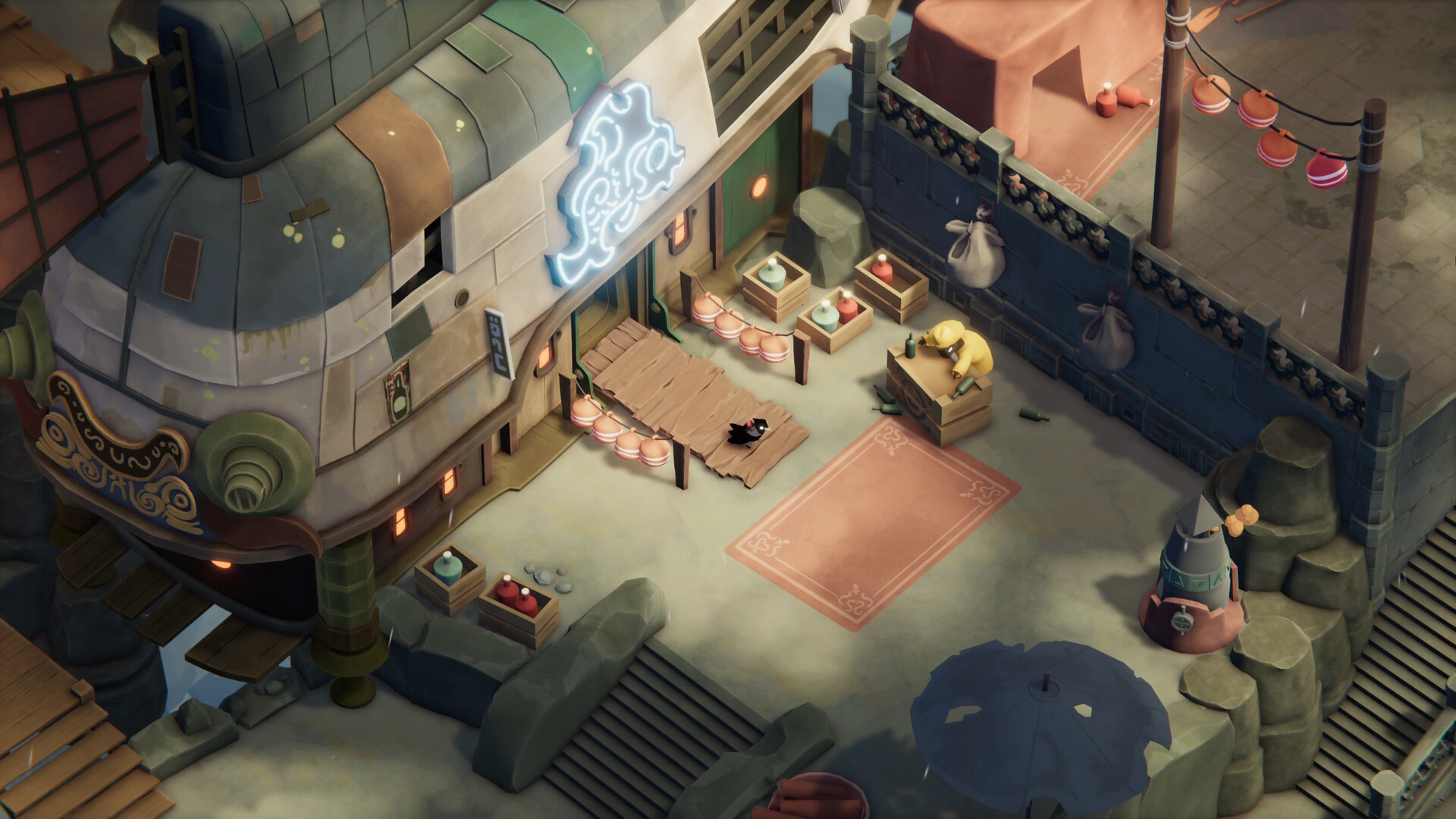 I really like how the world’s colors transition from the grey World of Doors to the more vibrant areas you go to on your adventure–what was the inspiration behind that stylistic choice? Why do something like that (beyond making me go, “Whoa, that’s cool”)?

One element to this is the idea that the crow’s office world is this noir office space, like a 1930s detective film. This felt like it fit well with the crows being black and grey themselves.

The other core reason for this is we wanted there to be a clear juxtaposition between this space, which acts as a hub world, and the outside world where most of the game takes place.

The main game world is set in a land untouched by death, intended to feel bleak yet beautiful, and the dreary office space is a darker greyscale environment, a reflection of the monotony of office work amplified by this grim world that has spent many centuries growing more and more devoid of life. 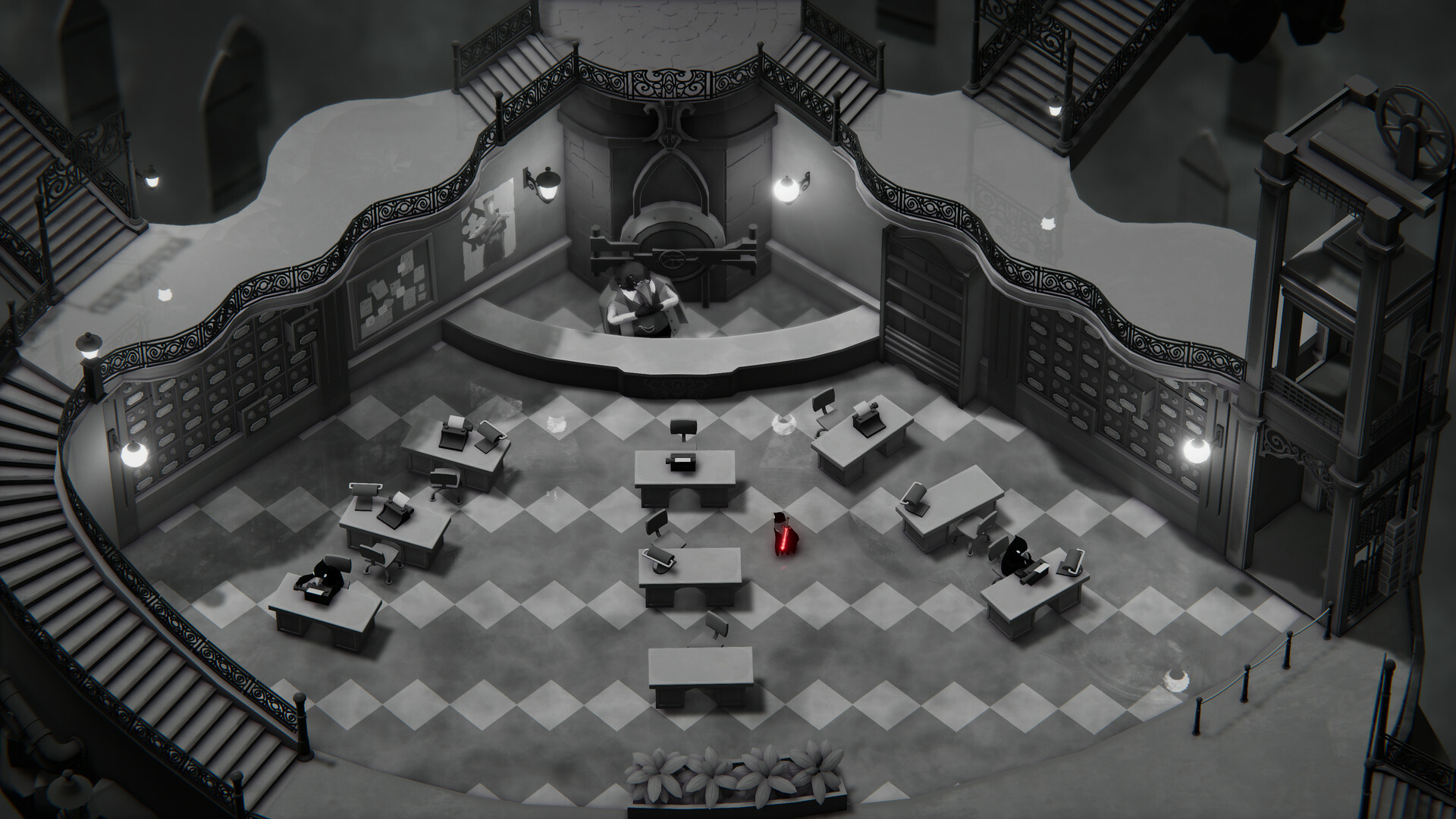 Despite the frantic nature of the combat, Death’s Door has–so far anyway–had a rather chill vibe. With one exception: When you die and hear that loud noise and DEATH flashes across the screen. In a game that handles death with a calm atmosphere, why is the player’s death regarded as this obtrusive event?

We wouldn’t say that deaths are handled with a calm atmosphere in the game. The main targets of the player are those who are avoiding Death at all costs, and in a way the crows are no exception–they carry out their jobs knowing that if they don’t, they will die. Failing on the job would not be a pleasant or casual occurrence for a Reaper. Not to mention, dying would involve a lot of paperwork for the other office crows…

Deaths are important moments in games like this. They’re moments to be remembered and reflected upon so next time you tackle the same situation, you have new experience to wield and overcome the obstacles that previously took you down.

I’ve been finding items that detail the history of Death’s Door’s world and characters–does picking them up change how the story plays out and how certain characters may react to me or are they solely there for fleshing out the lore?

There’s no consistent rule for how the items work. Some just flesh out lore, some provide a more direct purpose for exploration and some will impact the player’s interactions with the NPCs of the world. There are also some unique features to some of the shiny collectables you find that we will leave players to discover on their own. Won’t say any more on that to avoid spoilers! 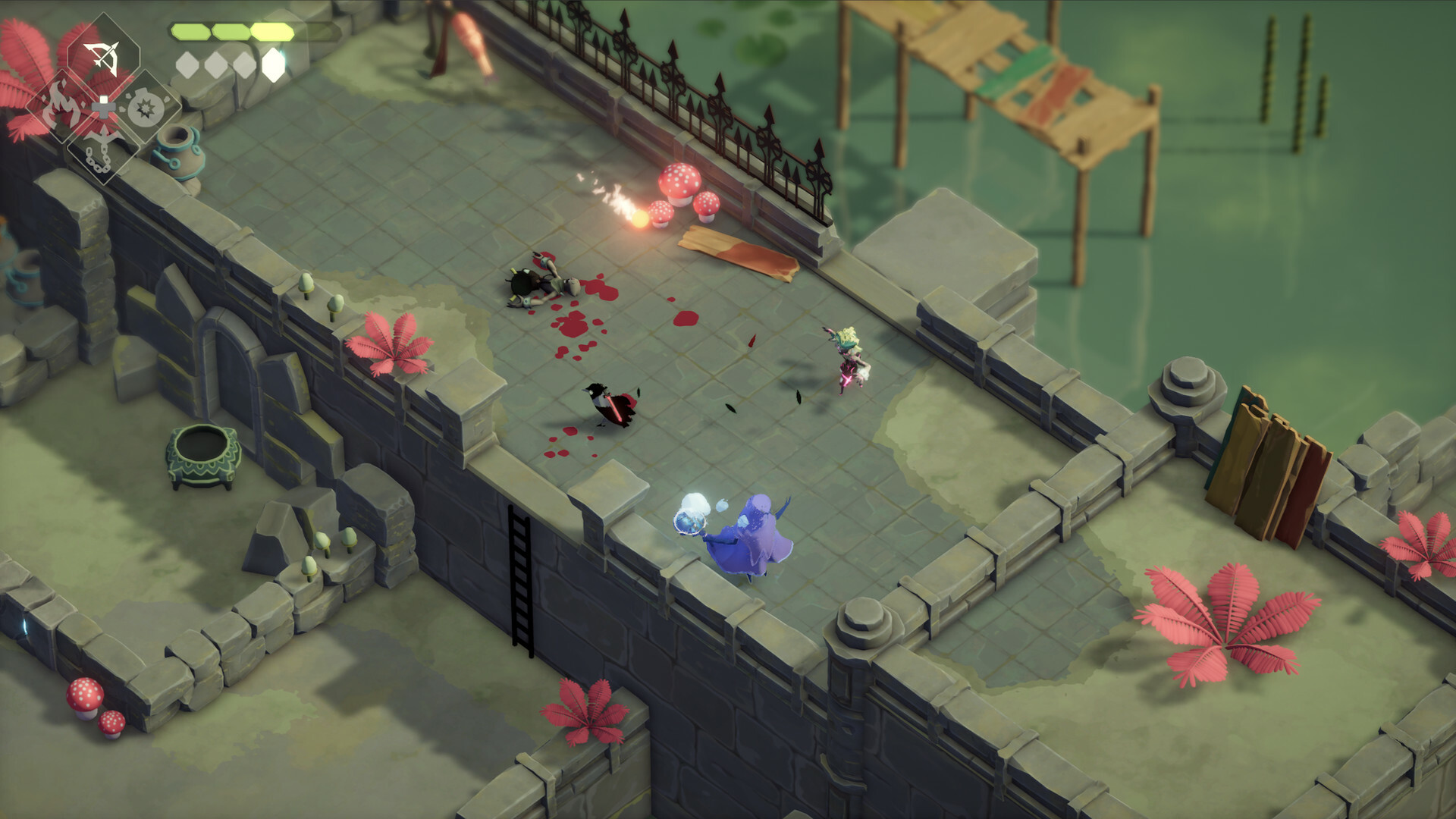 Why tell so much of the story through optional items as opposed to more traditional cutscenes and expositional dialogue between characters?

We do actually make sure we tell a full and non-ambiguous story through all of the main character interactions and cutscenes in the game, which felt like a bold step for us because as indies it’s often more common to opt for a more open-to-interpretation “story without words” (which is a style we still love and have used before!).

We put a lot of thought into the pacing, making sure you’re never slowed down by having lore dumped on you. For that reason, many of the character interactions and cutscenes are fairly concise. You then have the option of digging deeper into the lore through optional interactions, items and secrets for players who want to unravel more of the mysteries, and find deeper secrets hidden in the world.

Why a silent, unnamed protagonist? We don’t even get to know how they’re feeling or what they’re thinking beyond their body movements.

For the most part, the player can impart their feelings and reactions to the events of the game onto the protagonist like a player avatar, and use this to feel more connected to the game world. That said, we do prescribe a little bit of personality onto the protagonist, in that they are a young and inexperienced Reaper with a sense of innocent curiosity. Having the player character not speak serves this personality further and also plays into the idea that the Crows generally do what they are told without questioning it.