When Arcade1Up released its NBA Jam cabinet in 2020, it was a much-needed salve for my household’s Boomshakalaka-loving hearts as we spent an inordinate amount of time at home due to, at the time, a brand-new pandemic. It was the first Arcade1Up cabinet to feature Wi-Fi connectivity, allowing you to play against others who owned the cabinet. Much like all of Arcade1Up’s other titles, though, it was on the smaller side. Now, the company is addressing that particular issue with its NBA Jam: Shaq Edition system.

The Shaq Edition of NBA Jam is Arcade1Up’s biggest cabinet to date, at a whopping 67 inches tall. For comparison, the company’s original NBA Jam cabinet was 57.8 inches tall if you bought the version that came with the add-on riser. It’s not just the height that makes this cabinet stand out, though.

The Shaq Editionalso much more closely resembles the original arcade cabinet. Though the art on Arcade1Up’s first NBA Jam cabinet was based on the original game, the shape was certainly not. Now, with the Shaq Edition, you get updated cabinet art–complete with Shaquille O’Neil silhouettes on the sides–and a shape that’s far more reminiscent of the arcade classic.

Size isn’t the only upgrade on the Shaq Edition of NBA Jam, though. The cabinet includes–by far–the best marquee on an Arcade1Up cabinet yet. Instead of a block of wood with a light in it, this cabinet recreates the look of classic light-up marquees nearly perfectly, by having the marquee artwork and the light be separate pieces inside the cabinet. It’s worth noting that the light is evenly distributed across the marquee, with no bleeding to be seen. It looks fantastic. 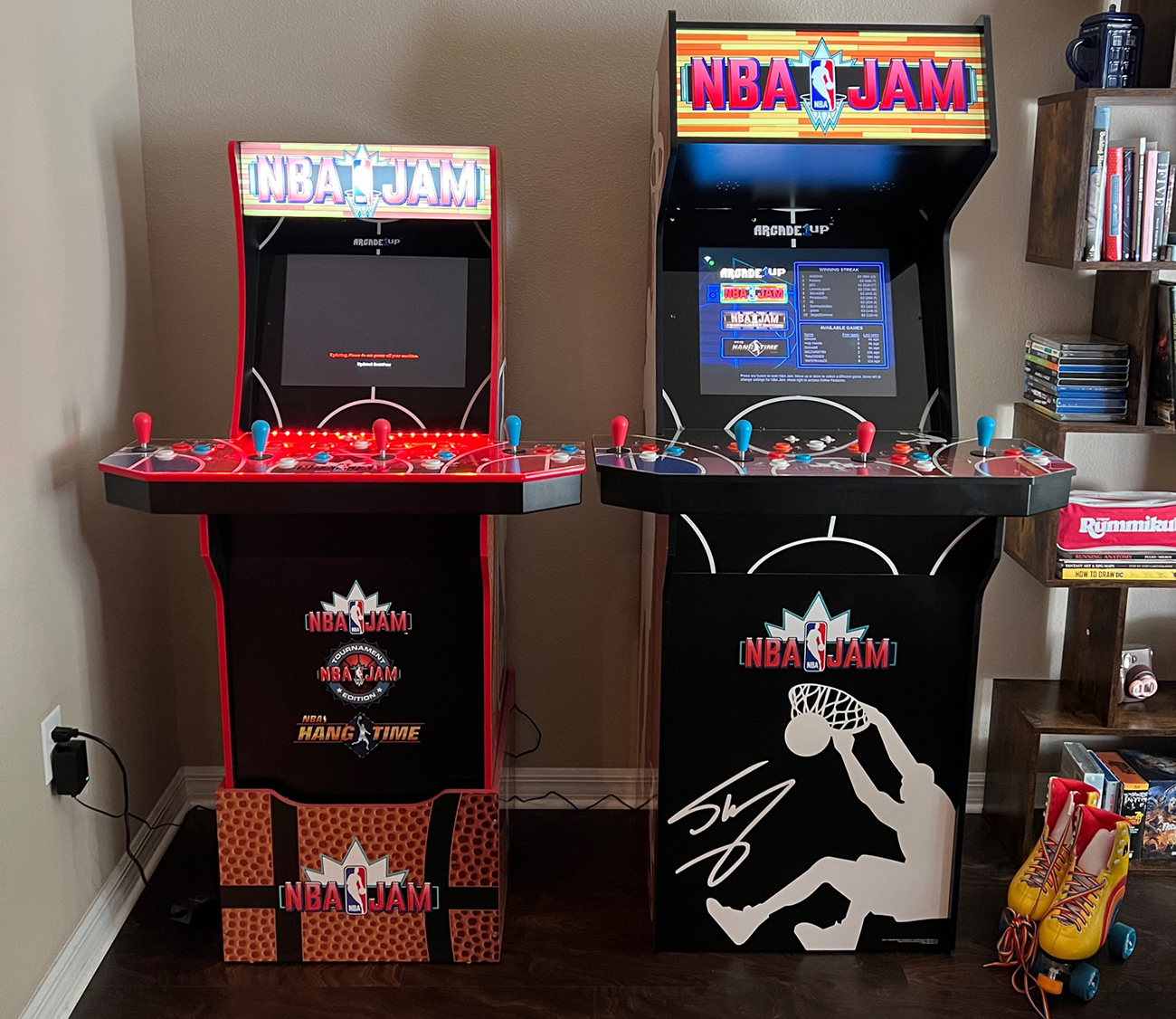 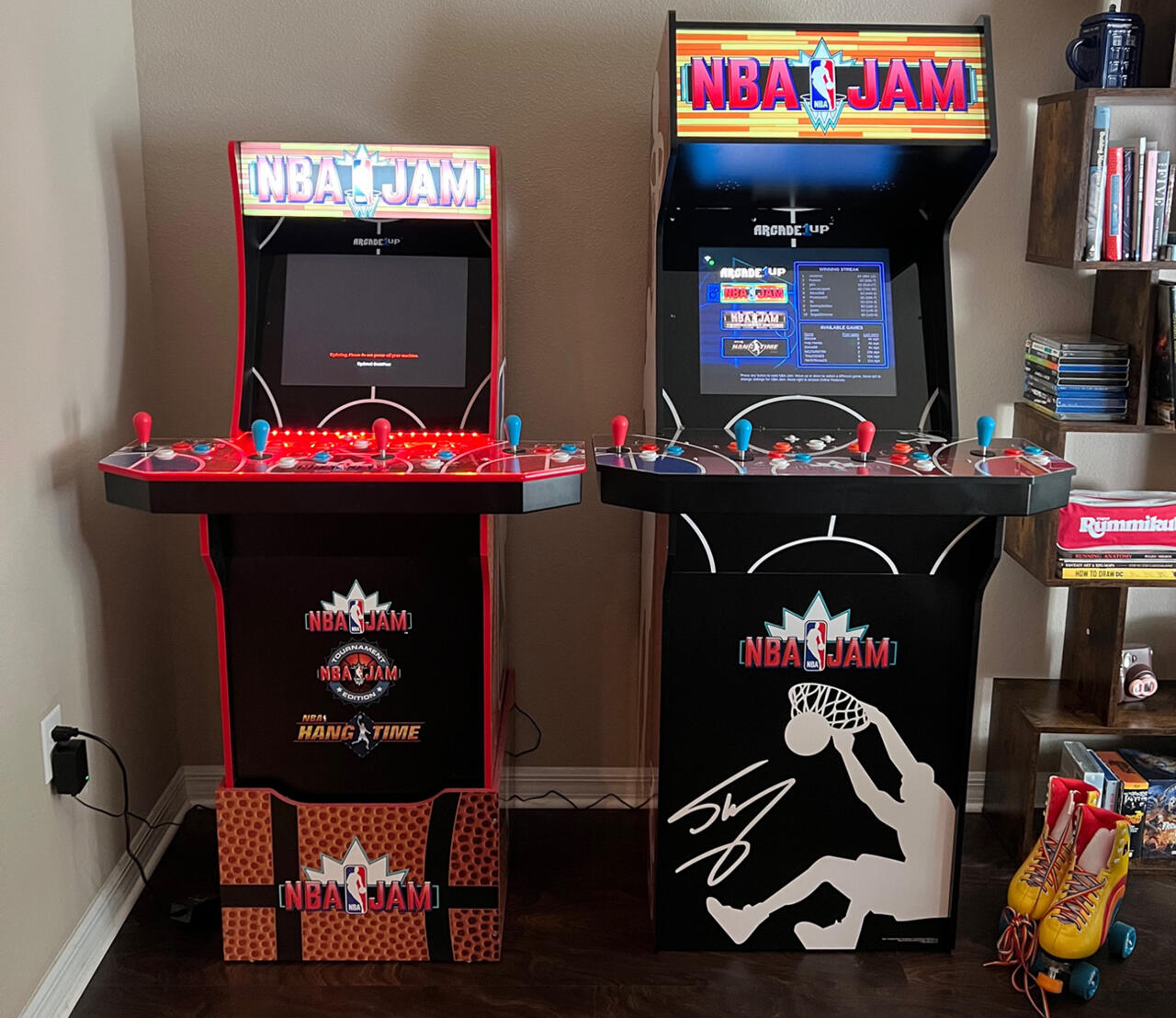 In terms of the cabinet itself, the only thing that hasn’t changed much visually is the control deck. Both the original and the Shaq Edition control decks are 31.5 inches wide. The new deck is a bit longer, but not by much. As such, it still is not the easiest thing in the world to cram four friends together to duke it out in a basketball game. At the very least, the screen is 19 inches diagonally–2 inches bigger than the previous release. It’s not a huge deal, but it is a nice bonus that should help with visibility if you do have four players on the system at once.

When it comes to the games included–NBA Jam, NBA Jam: Tournament Edition, and NBA Hangtime–you know exactly what you’re getting. These are ports of the original games that seemingly haven’t been tinkered with (aside from a few players being omitted, like the first cabinet) and appear to be the exact same copies of the games that are on the company’s previous NBA Jam release. The Shaq Edition also contains the same Wi-Fi functionality as the original cabinet, allowing you to play with friends who own either of Arcade1Up’s NBA Jam machines thanks to a new downloadable patch that allows the two versions of the cabinet to communicate with each other.

Put simply, the visual presentation of the Shaq Edition of NBA Jam blows Arcade1Up’s previous version out of the water. As you can see in the side-by-side photo above, the new cabinet makes the old one look more or less like a toy. However, you’re also going to be paying a premium price for it. NBA Jam: Shaq Edition retails for $700, compared to $550 for the standard NBA Jam cabinet. And unlike the standard version, it doesn’t come with the branded stool. What it does provide, though, is a more true-to-life arcade experience than the previous cabinet. What’s more, it’s only around six inches shorter than a standard arcade cabinet, as opposed to the standard edition which is over a foot shorter.

The true value will change based on the person, though. If you’re someone who wants to get as close as you can to recreating the NBA Jam arcade experience without spending $3,000 on a used cabinet, this is a great option for you. Then again, you’re also spending $700 on three vintage games, which is a lot to ask for. That said, it’s entirely possible you’re a fan of the brand and have already invested thousands of dollars in Arcade1Up products. If that’s the case, the notion of buying a bigger NBA Jam cabinet might not be all that strange.

Regardless of where you stand, though, this cabinet represents a very interesting turning point for Arcade1Up. The company realizes there is a market out there for larger cabinet reproductions and is actively meeting it. Both the Shaq Edition of NBA Jam and the company’s Golden Tee 3D Golf are larger, while a “Pro” line of cabinets that are the exact size and shape of arcade classics are in the works, beginning with Killer Instinct–and they even come with arcade-accurate SuzoHapp controls.

Ultimately, it comes down to what you’re looking for in a home arcade experience. NBA Jam: Shaq Edition may cost a bit more than the standard Arcade1Up cabinets, but what you get in return is a very close resemblance to the original arcade game–certainly the closest Arcade1Up has gotten thus far. If that’s important to you, you’ve found the right cabinet. However, don’t expect the control deck area to have a bunch of extra room thanks to the new model. Cramming around the machine with three of your friends will still be a bit of a tight squeeze. Still, this cabinet is bigger, it looks fantastic, and the gameplay is as good now as it was in the ’90s. Boomshakalaka!