Asteroid impacts shifted the moon’s poles over billions of years 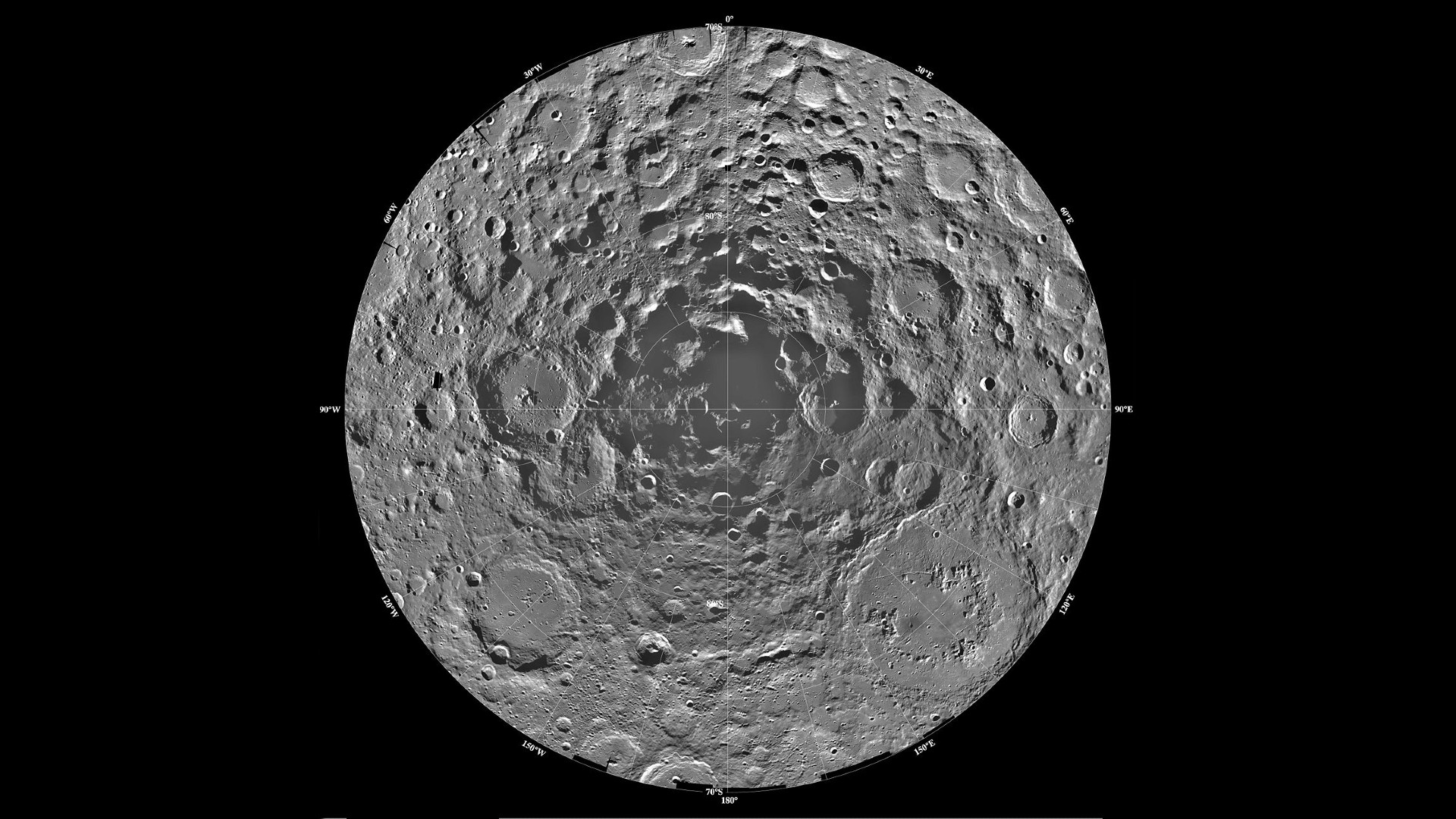 The moon’s poles have shifted as a result of asteroid impacts over billions of years, new research shows.

Astronomers have long used lunar craters to chart the history of both the moon and the whole solar system, because the distribution of the destruction left by asteroid impacts paints a picture of the violent conditions found in the young solar system. The new research turns the tables on those studies by simulating the removal of thousands of craters and by also considering the impacts of smaller craters, thus rewinding 4.25 billion years of lunar history.

The researchers, based at NASA’s Goddard Space Flight Center in Maryland, found that as the moon was buffeted by asteroid strikes, its northern and southern poles wandered by around 10 degrees in latitude  —  equivalent to around 186 miles (300 kilometers).

Related: The moon has way (way) more craters than we thought

The geographic poles of the moon are located where its axis of rotation  —  the imaginary line around which it turns  —  intersects the lunar surface. The simulation showed that while the body of the moon moved, the rotational axis stayed fixed.

The discovery could shed light on how Earth’s natural satellite has evolved and could help researchers locate water and other resources that could be used for future crewed space missions.

Scientists have found frozen water in cold, shadowy regions at the moon’s poles, but how much water is there has been a mystery. By understanding how and where the poles have shifted, researchers could learn how much frozen water has been transformed from solid ice straight into gas  —  a process called sublimation. An extreme shift in the lunar poles’ locations  —  especially toward warmer, less shadowy regions of the moon  —  would have resulted in water being quickly sublimated and lost to space, also giving new water less time to accumulate at the poles.

“Based on the Moon’s cratering history, polar wander appears to have been moderate enough for water near the poles to have remained in the shadows and enjoyed stable conditions over billions of years,” Vishnu Viswanathan, a research scientist at NASA Goddard who led the study on the moon’s wandering poles, said in a statement (opens in new tab).

The shifting of the poles is caused by a phenomenon called “true polar wander,” which occurs when a spinning object is faced with obstacles, like a change in the distribution of its mass. In the case of the moon, that happened when asteroid impacts carved out deep depressions in the lunar surface, which redistributed mass and left regions of lower mass.

The moon reoriented itself, shifting these low-mass “pockets” toward the poles. As this happened, centrifugal force  —  the same force that flattens and stretches dough into a pizza base  —  moved high-mass regions toward the lunar equator.

A close-up of many of the moon’s craters. (Image credit: NASA) (opens in new tab)

“If you look at the Moon with all these craters on it, you can see those in the gravity field data,” David E. Smith, a research scientist at the Massachusetts Institute of Technology and co-author of the new research, said in the statement. “I thought, ‘Why can’t I just take one of those craters and suck it out, remove the signature completely?'”

Smith is the principal investigator of the Lunar Orbiter Laser Altimeter (LOLA) instrument aboard NASA’s Lunar Reconnaissance Orbiter and has experience using gravity data to assess the shift in the lunar poles. Smith, Viswanathan and their team used LOLA data to design computer models that took the coordinates and widths of 5,200 lunar craters between 12 and 746 miles (19 to 1,200 km) in diameter.

Then, the team matched impact craters with pockets of higher or lower gravity found on a gravity map of the moon created with data from NASA’s Gravity Recovery and Interior Laboratory. They ran these simulations backward, removing these pockets of high and low gravity and thus erasing craters in sequence by their age. This rewinding of the moon’s evolution inched the poles back to the positions they occupied billions of years ago.

Researchers had attempted a similar process previously, but by focusing only on the largest lunar craters, those efforts did not consider the net effect of smaller impacts on the moon’s poles.

“People assumed that small craters are negligible,” Viswanathan said. “They’re negligible individually, but collectively, they have a large effect.”

The researchers will continue to simulate the removal of smaller craters from the lunar surface, and they plan to remove features caused by volcanic eruptions in the moon’s history. The team hopes these additional steps will help paint a more complete picture of polar wandering on the moon.

The findings were published Sept. 19 in The Planetary Science Journal (opens in new tab).