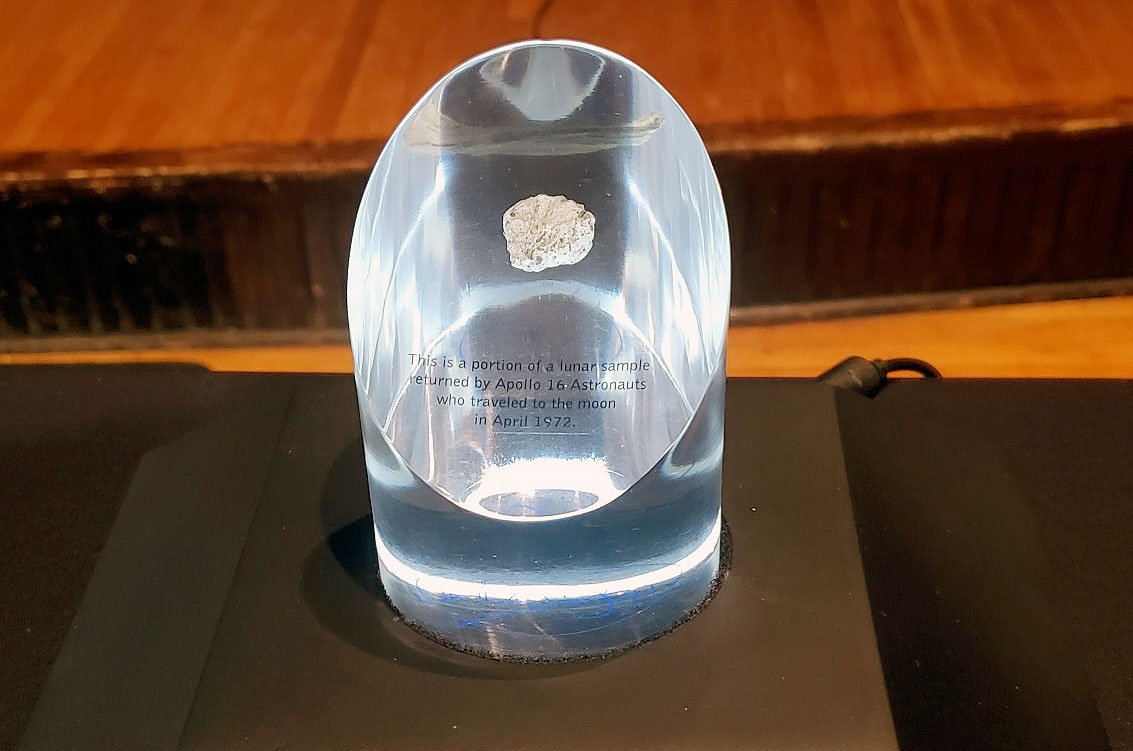 Fifty years after it was brought back from the moon, a small lunar rock has moved from the “Most Magical Place on Earth” to the “Show Me State.”

NASA presented the moon rock to The Space Museum and Grissom Center in Bonne Terre, Missouri on Saturday (April 2), 15 years after it was first placed on exhibit at the Epcot theme park at Walt Disney World Resort in Florida. In both instances, the lunar display was done to honor Virgil “Gus” Grissom, the United States’ second astronaut to fly into space.

“The Space Museum and Grissom Center is the new home of Gus Grissom’s Ambassador of Exploration Award containing an authentic moon rock from Apollo 16!” the museum announced on its social media accounts on Saturday. “Come out to see one of only two moon rocks in Missouri!”

As established by NASA on the 35th anniversary of the first Apollo moon landing in 2004, the Ambassador of Exploration Award celebrates the “realization of a vision” that began with a president’s challenge to the nation in 1961 and resulted in the first humans walking on the lunar surface before the decade was out. Honorees include NASA’s Mercury, Gemini and Apollo crew members, as well as President John F. Kennedy and veteran journalist Walter Cronkite.

Lowell Grissom speaks at the ceremony for the NASA Ambassador of Exploration Award presented to his late brother, Virgil “Gus” Grissom, at The Space Museum in Missouri. (Image credit: NASA/Bob Jacobs)

The award itself displays a 2-gram (0.07 ounces) moon rock embedded in a lucite cylinder positioned atop a base. In Grissom’s case, the lunar sample is from Apollo 16, which landed Charles Duke and Grissom’s Gemini 3 crewmate John Young in the moon’s Descartes Highlands on April 21, 1972, 50 years ago this month.

Saturday’s presentation also came just a day shy of what would have been Grissom’s 96th birthday. One of the original seven astronauts, Grissom piloted NASA’s second suborbital Mercury flight in 1961 and commanded the first Gemini mission in 1965 before he and his two Apollo 1 crewmates tragically died in a fire during a test on the launchpad in 1967.

Although the Ambassador of Exploration Award is presented only in name — the moon rock remains the property of NASA — the recipient or their family is invited to choose where it is displayed, so long as it is a museum or educational institution and can meet NASA’s security requirements.

Grissom’s widow, Betty, originally selected Disney’s Epcot to display her late husband’s award. In 2007, the theme park debuted the moon rock on display as part of its “National Treasures” exhibit inside The American Adventure, part of Epcot’s World Showcase. The award was positioned next to a portrait of Grissom and near other space artifacts, including a flight vest worn by Native American astronaut John Herrington.

The “National Treasures” exhibit was replaced, though, in 2013, which led to the moon rock being taken off display. As Betty Grissom died in 2018, Lowell Grissom, Gus’ brother and an advisor to The Space Museum, chose the Bonne Terre facility as the new home for the Ambassador award.

The moon on Earth: Where are NASA’s Apollo lunar rocks now?

“Lowell had a choice, and the fact that he and his family chose Bonne Terre to honor Gus, well, that speaks very well for us,” Earl Mullins, founder and president of The Space Museum, told the Daily Journal newspaper.

Bob Jacobs, NASA’s director of history and information services at the agency’s headquarters in Washington, D.C., traveled to Missouri to make the presentation.

“It was an honor to present Gus Grissom’s Ambassador of Exploration moon rock award with his brother Lowell and wife Bobette to The Space Museum in Bonne Terre,” Jacobs wrote on Twitter.

“There are great folks who are excited about exploring everywhere,” Jacobs added in another tweet.

The moon rock is now one of, if not the most, valuable space artifacts on display at The Space Museum, which was born out of Mullins’ personal collection. The only other lunar samples in the state are Missouri’s Apollo 11 and Apollo 17 goodwill gifts, which are held by the State Museum in Jefferson City.

“Obviously, we’re incredibly excited that NASA is recognizing us as a legitimate museum and that they are entrusting us with something that is literally irreplaceable,” said Mullins. “Per their request, we had to install some very special security and monitoring systems in order to be able to get this.”

To date, NASA has approved the display of 35 Ambassador of Exploration awards in museums and at universities across the United States. Six honorees are still pending an exhibit, including astronauts Bill Anders, Alan Bean, Ron Evans, Rusty Schweickart and Harrison Schmitt.