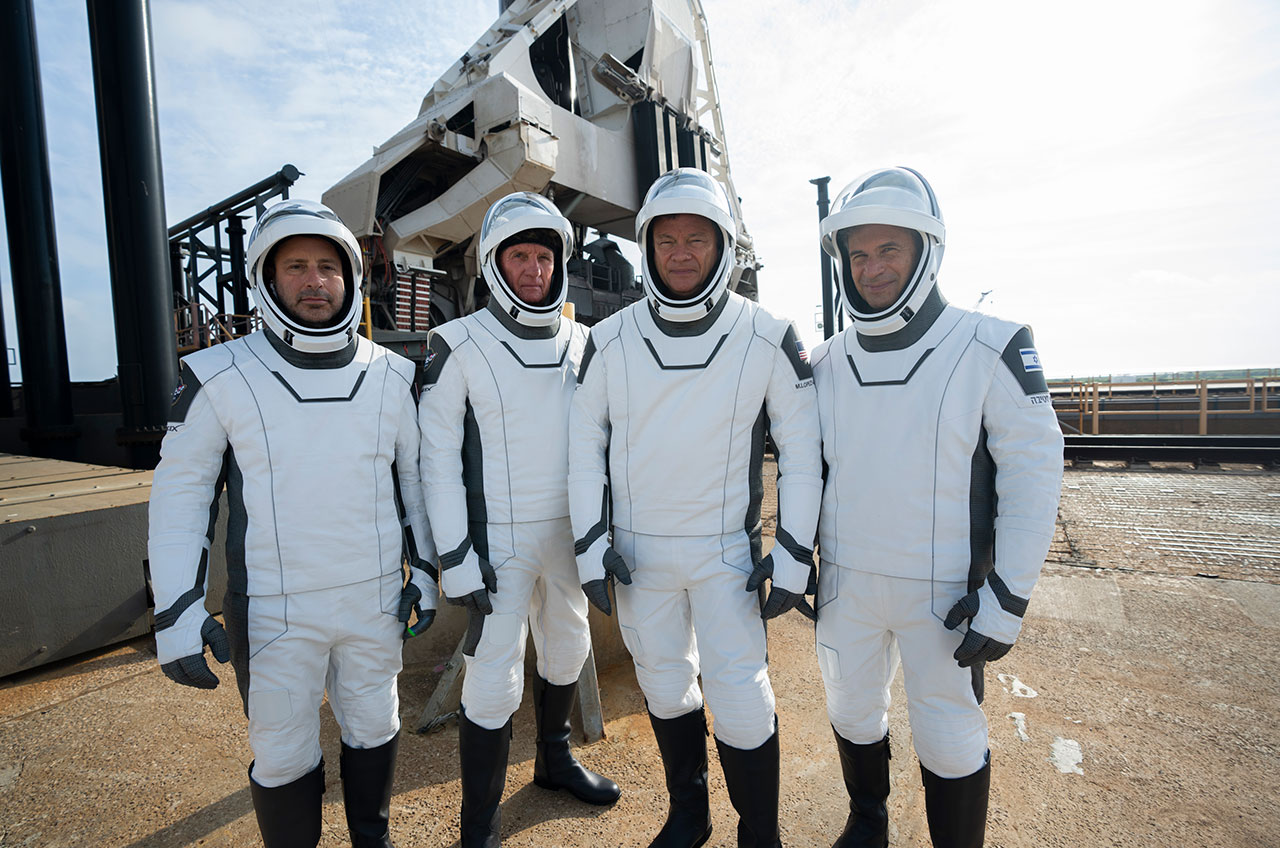 Artifacts from the first heavier-than-air powered flying machine, the first spacecraft to carry humans to land on the moon and the first Israeli to fly in space are headed into orbit with the first private crew to visit the International Space Station.

The Axiom Mission-1 (Ax-1), organized by Houston-based Axiom Space, is set to launch with three private individuals and the first former NASA astronaut to revisit the space station on a 10-day, history-making and history-carrying flight (opens in new tab). Lifting off on a SpaceX Dragon spacecraft lofted by a Falcon 9 rocket from NASA’s Kennedy Space Center in Florida, the Ax-1 mission is the first to fly under NASA’s directive to establish a low Earth orbit economy capable of sustaining commercial outposts.

“This is opening a new era in human spaceflight,” said Lopez-Alegria during his crew’s pre-flight press conference previewing the mission. “We are taking the first step in a next generation platform initiative that’s going to bring working, living and research in space to a much broader and more international audience.”

“As a kid, and I was so inspired by the early manned missions that NASA had put in the first three [programs], Mercury, Gemini and Apollo,” he said. “It is such an inspiration to me to be able to participate in what I think is the opening of the next chapter. It is truly an honor.”

During their eight days on the space station, the Ax-1 crewmates (opens in new tab) will take part in a multi-discipline science program for the International Space Station U.S. National Laboratory in collaboration with the Mayo Clinic, the Cleveland Clinic, Canadian Space Agency, Montreal Children’s Hospital, Ramon Foundation and Israel Space Agency.

Past and present explorers

As Ohio’s newest astronaut and only the second private orbital mission pilot in the annals of human spaceflight, Connor is using part of his personal kit to honor his state’s contributions to aviation and space history.

“I am very proud to be from Ohio,” Connor told reporters. “There’s been a number of astronauts from there — by the way, I absolutely do not put myself in their league — iconic people like John Glenn and Neil Armstrong. So I hope in some small measure to represent Ohio and I am going to be taking from the Armstrong Museum three different items, as well as I live in Dayton, Ohio, the birthplace of Orville and Wilbur Wright, so I’ll be taking a piece of cloth from the Wrights’ 1903 Kitty Hawk Flyer.”

Among the items Connor borrowed from the Armstrong Air & Space Museum in Wapakoneta (opens in new tab) are a political campaign button from John Glenn’s run for the U.S. Senate, an embroidered patch representing the museum and a piece of golden Kapton foil that was removed from the exterior of the Apollo 11 command module “Columbia” by Navy frogman Mike Mallory.

“We are very excited that our organization is represented on this historic mission. This marks an exciting new chapter in space exploration and the museum will have personal items that directly relate to this impressive achievement,” Logan Rex, curator at the Armstrong Air & Space Museum, said in a statement.

Like Neil Armstrong who flew one to the moon (opens in new tab), Lopez-Alegria is bringing a flag to the space station on behalf of The Explorers Club.

“I’m also bringing what’s called an expedition flag from The Explorers Club,” Lopez-Alegria said in a response to a question from collectSPACE.com. “These flags are sent out on expeditions to the highest points on Earth to the lowest points at the bottom of the sea and every which where in between. It will be a real pleasure for us to go back to New York and deliver the flag after it has flown in space.”

“I feel like I’m the only one who doesn’t have any sort of cool historical stuff with me,” said Pathy, who is the 11th Canadian to fly into space.

Instead, Pathy packed three of his kids’ favorite toys, some coins to gift them after the the flight and gifts for his wife and brother. He also is flying patches and small flags at the request of some friends.

Stibbe also has personal items, including a glass symbolic of the wine he would normally drink during the Passover seder (“I don’t think I will find any wine on the station and I don’t think I [would] need a glass to drink wine.”), but he took items to represent his fallen friend, Israel’s first astronaut Ilan Ramon.

“He was my commander in the [Israeli Air Force’s 117] squadron,” said Stibbe, remembering Ramon who died on NASA’s space shuttle Columbia (opens in new tab) in 2003. “On that tragic day of the accident, I was at the squadron and watched with all of the Israeli people and it was a very painful day.”

One of the pages from Israeli astronaut Ilan Ramon’s journal that was recovered with the debris from space shuttle Columbia. Ax-1 crew member Eytan Stibbe is flying copies of the pages. (Image credit: Rakia Mission)

In addition to continuing a thunderstorm observation experiment that Ramon started 19 years ago, Stibbe is flying Ramon’s personal notes penned during the ill-fated STS-107 mission.

“I will take a few items, including a copy of the diary that survived somehow that crash, a diary that Ilan wrote on board the Columbia during his spaceflight and some of the pages survived,” Stibbe said. “I will take copies of these pages with me and I will take a song written by his son and a beautiful painting painted by his daughter of pages falling out of the sky.”

“The Japanese after the second world war donated to the United Nations the Peace Bell and since then they made several copies of that world peace bell and we installed one in Israel as well in the city of Lod,” said Stibbe. “Now, I’ll take a miniature of this Peace Bell as a signal of the International Space Station being a center for world peace.”