It was back during the showcase for the Beyond Light expansion in 2020 that Bungie first gave an indication of where its overall story for Destiny 2 would be headed over the next few years. It was the first time the developer mentioned The Witch Queen, the expansion to follow Beyond Light, and gave an even further look to the future with Lightfall. Though Bungie provided few details at the time, a black-and-white logo treatment and the name of the expansion were enough to conjure a lot of ideas about just how dark and desolate Destiny 2 would get as it hurtled toward the conclusion of its current story arc, the Light and Darkness saga.

Two years later, Bungie has finally provided more details about Lightfall with its annual Destiny 2 showcase, and the latest look at 2023’s expansion has completely upended expectations of what the first-person shooter MMO’s next chapter will be like. The black-and-white, stark logo treatment has been replaced by a 1980s-esque, cyberpunk approach, and the cinematic trailer that came with the showcase showed that players will find themselves in a vibrant, neon-lit city–a far cry from the destroyed and overgrown ruins of much of Destiny 2, or the destruction that a title like Lightfall first conjures up.

Laying out the course of the story through the expansions following Beyond Light–The Witch Queen, Lightfall, and the concluding episode, The Final Shape–gave Bungie a roadmap for the future. It also demonstrated the fact that the trajectory of the story might be too dark.

“When that Beyond Light showcase was coming out and had Witch Queen, Lightfall, and The Final Shape, I think in that moment, we knew narratively where we needed to be,” Destiny 2 director Joe Blackburn said in an interview with GameSpot. “We knew that, in Beyond Light, we’re going to start teasing the Darkness. In Witch Queen, we have got to put the Witness on the chessboard for real. We knew where we needed to be in The Final Shape, and we knew a few beats that needed to happen in between those, narratively.

“I think it was really when we started planning The Witch Queen and we started looking at the surrounding seasons, we said, ‘Okay, with Witch Queen, we really like True Detective, we really want to go swampy and moody.’ Then we looked at Shadowkeep and Beyond Light, how they shaped up, and how the seasons were shaping up, and we said, ‘Okay, we know the mood The Final Shape needs to be.’ And we were like, ‘Oh, my gosh, is this going to be the heaviest five years of Destiny that we’ve ever made? Are we going to fill one note throughout this whole thing?'”

Blackburn said the team started looking at how it could avoid making its expansions feel too tonally similar, while still maintaining the story it had set out. The Light and Darkness saga is headed toward a climax in which players will finally face an ultimate villain that’s been teased since the original story of Destiny 1. The threat is enormous–Destiny already takes place in a post-apocalyptic future world, and it was that villain, the Witness, who caused the apocalypse to begin with. The Witness is returning to finish the job it started with that apocalypse, which is known as the Collapse, so Bungie also needs to make sure the story carries the proper gravity to befit something so dire.

“As we started getting towards Lightfall, we said, ‘Hey, how can we keep the stakes high but change the mood for a release?'” Blackburn continued. “We looked at things like The Empire Strikes Back, that has a feeling of, oh, my gosh, [the heroes] lose, but the movie doesn’t feel like they lose the whole time. We started to look at, okay, what are things with really high stakes that have a different tone to them? I think we got really attracted to sort of blockbuster action movies.

“We were like, ‘Oh, my gosh, is this going to be the heaviest five years of Destiny that we’ve ever made? Are we going to fill one note throughout this whole thing?'”

With The Witch Queen, Bungie tried to capture a fantasy that made players feel like they were working through a detective story as they tried to uncover the motivations and plans of the expansion’s antagonist, Savathun. In keeping with the blockbuster action movie inspirations, Bungie wants players to feel like they are action heroes, “to oversimplify it,” Destiny 2 assistant general manager Dan McAuliffe told GameSpot.

He likened the experience to that of Michael Bay movies and other action films, something “over the top, in not just the stakes, but everything that’s happening,” he said.

The new destination that’s central to Lightfall, the Neptune city of Neomuna, is also a big part of that blockbuster feeling, McAuliffe said. As depicted in the Lightfall trailer, Neomuna is a pristine location that has been hidden for hundreds of years, existing almost since the Collapse, but it’s coming under attack by armies of Cabal enemies in the expansion. For McAuliffe, the setting calls up parallels to the movie Blade Runner and other sci-fi films of that era.

“Just a cityscape in and of itself is tall, larger than life,” he said. “It is a very different point of view and different silhouette than the player’s used to seeing. Then add that into that very hyper-futuristic, modern, neon type of atmosphere, and I think you have a lot of the hallmarks from those great blockbuster action movies.”

Just as the tone of Lightfall in its trailer is a departure from what players might have expected, the look of Neomuna is very different from what Destiny fans have seen before. Because it takes place in the aforementioned futuristic post-apocalypse, many of the locations players fight through in Destiny 2 are ruins of civilization that have been reclaimed by nature. Neomuna, on the other hand, is a lived-in and functioning city–albeit one under siege when players arrive. 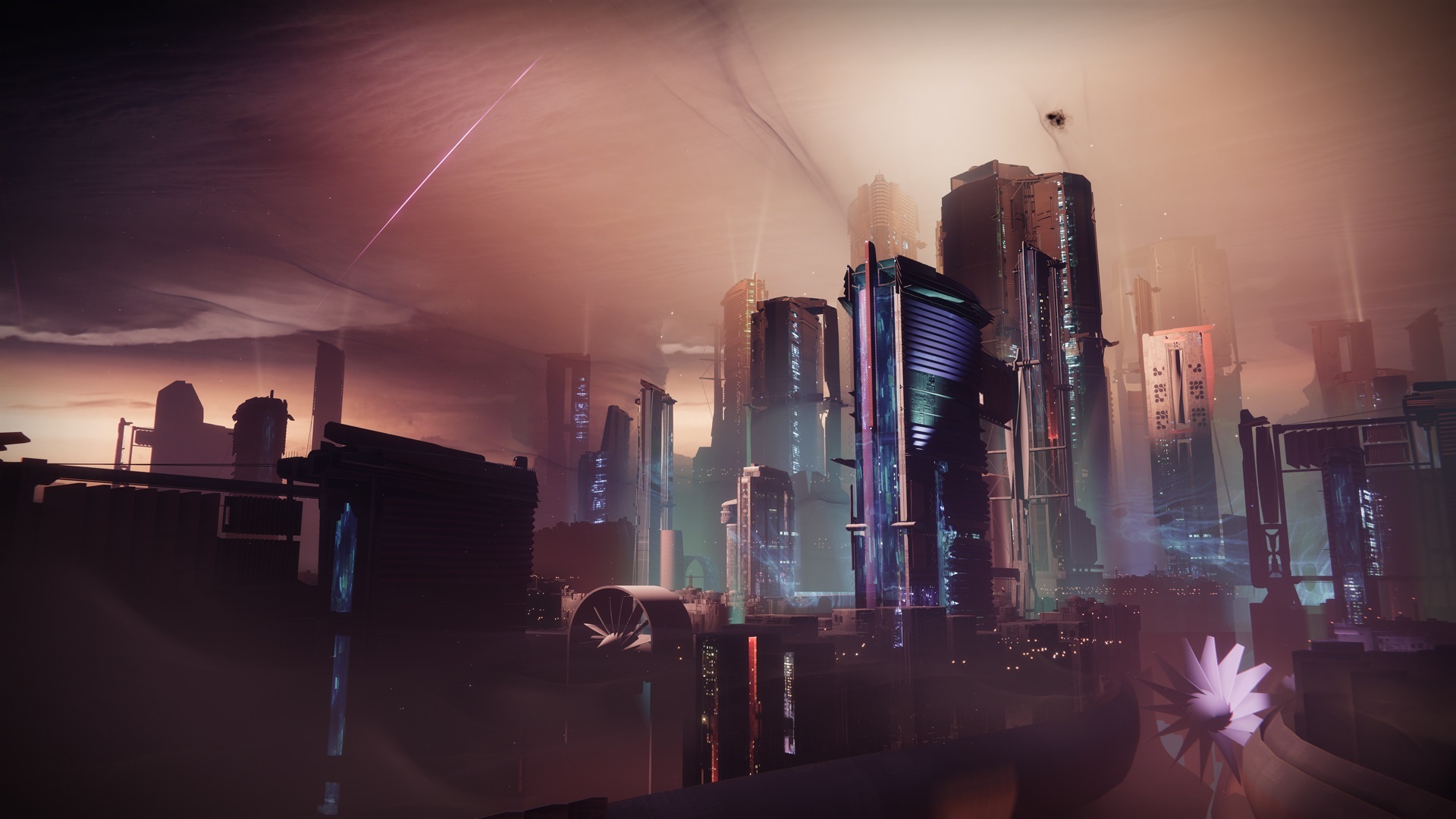 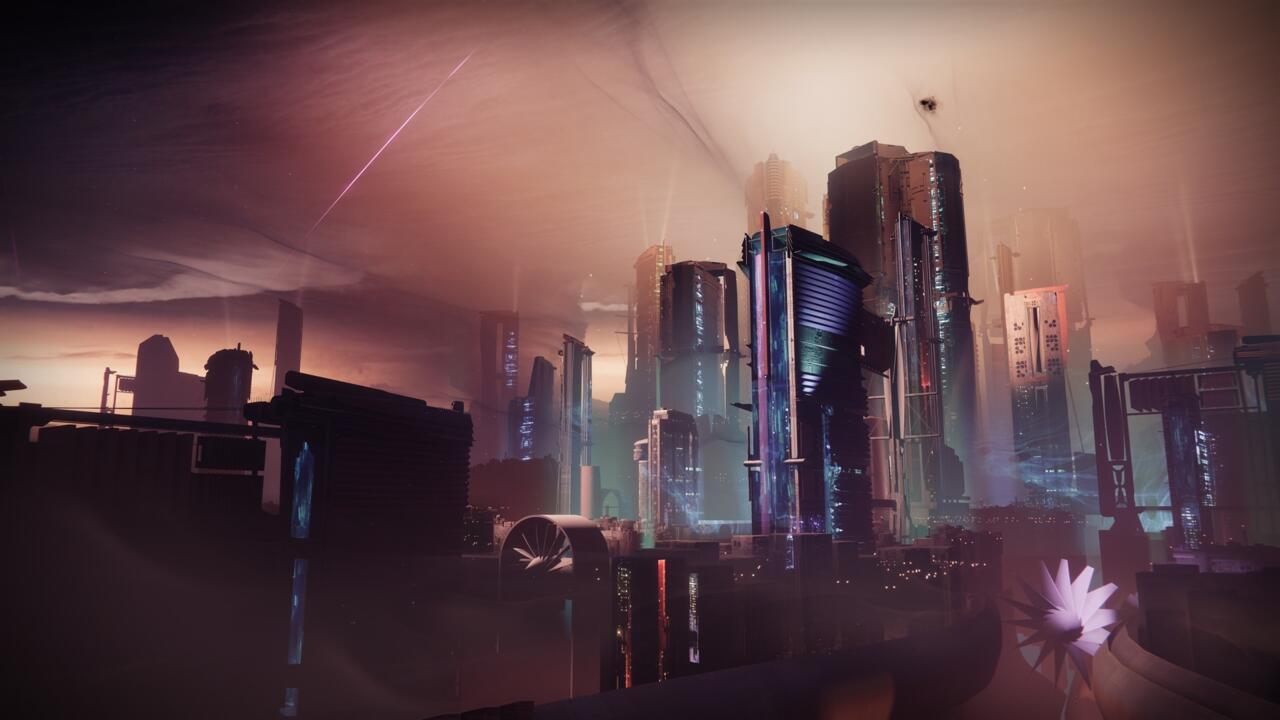 Blackburn said that while Neomuna will feel more vibrant and functional than other locations players have fought through in Destiny 2, it’s still a warzone–“expect blown-out windows; expect pyramids crashed into stuff,” he noted. But the difference is the immediacy; Neomuna is a place where the destruction is happening actively, or has happened in the very recent past. That’s as opposed to locations like the Cosmodrome, a rusting ruin players visit on Earth, where the destruction took place hundreds of years earlier.

The different approach and more complete urban setting of Neomuna will also change the feel of combat within the new location.

“We looked at things like The Empire Strikes Back, that has a feeling of, oh, my gosh, [the heroes] lose, but the movie doesn’t feel like they lose the whole time.”

“From a gameplay perspective, we still have a really classic–all the way back from Halo to Destiny–pedigree for the kind of spaces that we like to build, but we’re building that in a new way,” Blackburn said. “This is tighter gameplay spaces, more interior-to-exterior changes; when you’re in interiors, what that feels like. Not every place that you go into in Neomuna is a science facility, which I feel like anywhere else you go in Destiny, it’s like, ‘They did science here.’ It’s not true for all the places you’re going into in Neomuna. I think that’s really exciting for us to see and explore.”

Building this different kind of space was something new and difficult for the team to try, Blackburn said; it’s not something Bungie is used to, as opposed to other studios, such as Uncharted and The Last of Us developer Naughty Dog.

“I’ll say just straight up, this is a big development challenge for us, because we’re not Naughty Dog. We don’t build these kinds of lived-in cities a thousand times,” he explained. “How do you do that in a Destiny way? How do you make something feel familiar to players, but also have that little bit of that Destiny spin? Yeah, that’s been a fun challenge.” 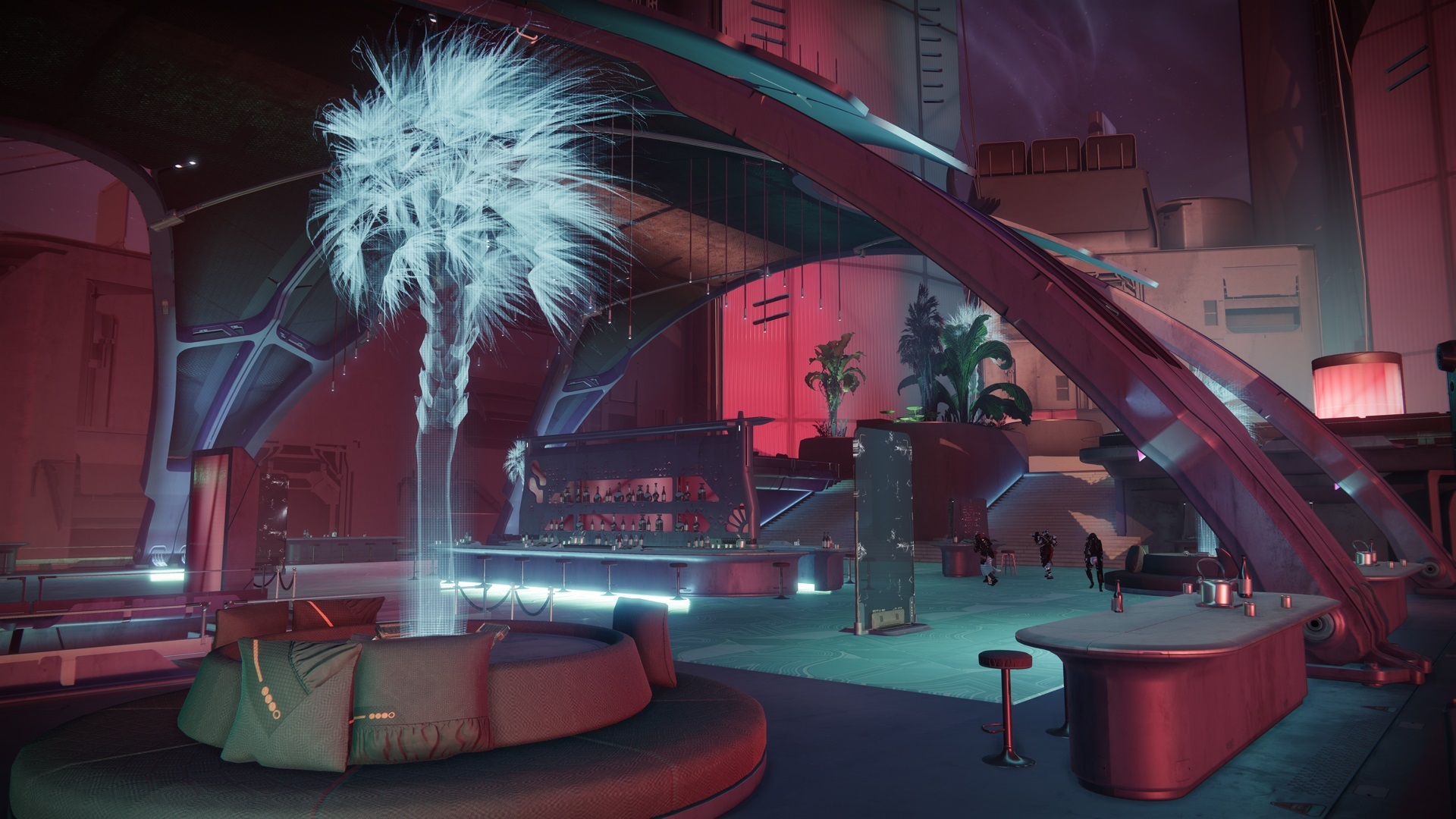 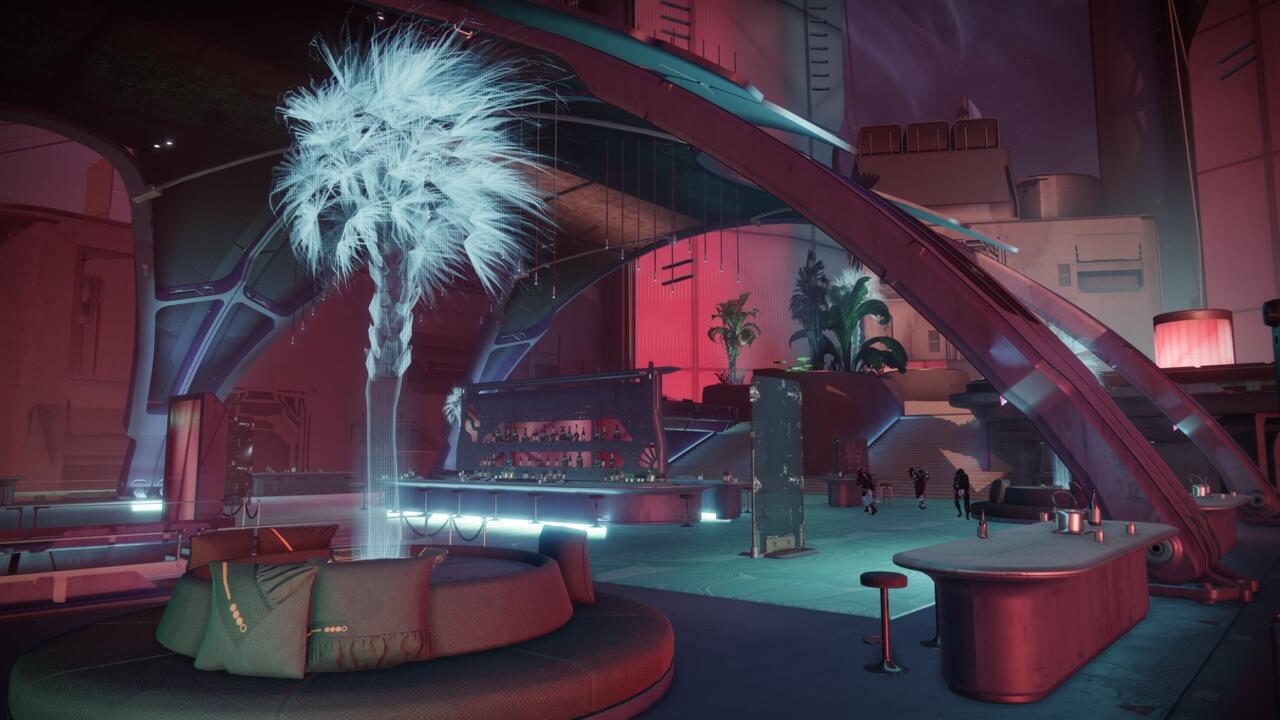 Finding ways to subvert player expectations is essential to making Destiny 2 work overall, Blackburn explained. He said the studio spends a lot of time thinking about the game and franchise as a whole, and that longview can push expansions in specific directions. The trick is meeting the needs of the game, like including specific types of enemies at certain destinations, while also making sure new Destiny 2 content still feels fresh.

“Even when you’re planning out something like the Throne World [from The Witch Queen] or something like Neomuna, we have boards that talk about the colors of each destination,” he said. “Then it’s like, ‘Oh, are we too blue? Are we too green? Are we too orange? Can we not add another orange planet to the game?’ These are things that people talk about in a really serious way about the franchise, and all of that starts to form this constraint on, hey, these are the aliens that we need to see because of the narrative beat, but also because we haven’t had a destination with them in a while. Suddenly you start to have this list of, hey, we need to hit these checkboxes, and then you start running different experiences through them and say, ‘Can we make something exciting out of this?’ We don’t want Destiny just to feel like, yeah, they make things because of a series of constraints. It’s a fun balance to be a part of, for sure.”

The thinking on Lightfall seems reflected in Destiny 2 right now, with its Season of Plunder. After Season of the Haunted, which put players on an infested ghost ship full of ghosts and focused on main characters dealing with their trauma, Plunder is a space pirate adventure. It’s a great deal lighter than where Destiny 2 has gone lately, but seems intent on maintaining stakes–it’s already gesturing at interpersonal conflicts that seem poised to add some seriousness to the swashbuckling. We’ll have to wait until Lightfall’s launch on February 28, 2023, to see how its story, aesthetics, and gameplay additions will fit in with Destiny 2.