New content is arriving to Vanguard and Warzone with the launch of Call of Duty Season 4 on June 22. Season 4 is called Mercenaries of Fortune, which is themed around Vanguard’s once-allied operators, who are now feuding over an abundance of gold.

Season 4 updates will be available to download at 9 AM PT / 12 PM PT on June 21 for Vanguard and 9 AM PT / 12 PM ET on June 22 for Warzone, but the Season 4 Mercenaries of Fortune content will officially go live following Warzone’s update.

What to expect from Season 4

Mercenaries of Fortune’s roadmap details a new set of operators coming to Vanguard and Warzone with the introduction of Special Operations Task Force Immortal. As is usually the case with new seasons, players can expect Season 4’s battle pass to include 100 tiers of new content, with two new DLC weapons in the free tiers.

Special Operations Task Force Immortal will include Vanguard’s Captain Butcher as the operator found in the premium tiers of Season 4’s battle pass. Task Force Immortal’s Callum Hendry and Ikenna Olowe will arrive later in the season, presumably as cosmetic operator bundles in the in-game shop.

Found in the free tiers of the battle pass will be the new Marco 5 submachine gun and UGM-8 light machine gun. Later in the season, unlock challenges will become available for the Push Dagger melee tool and Vargo-S assault rifle.

Warzone’s Mercenaries of Fortune event will work similarly to past Call of Duty events with a set of eight challenges to complete for rewards, such as a reticle, weapon charm, emblem, sticker, and calling card, as well as weapon camos. Completing all eight challenges will unlock a gold skin for Warzone’s armored SUV. 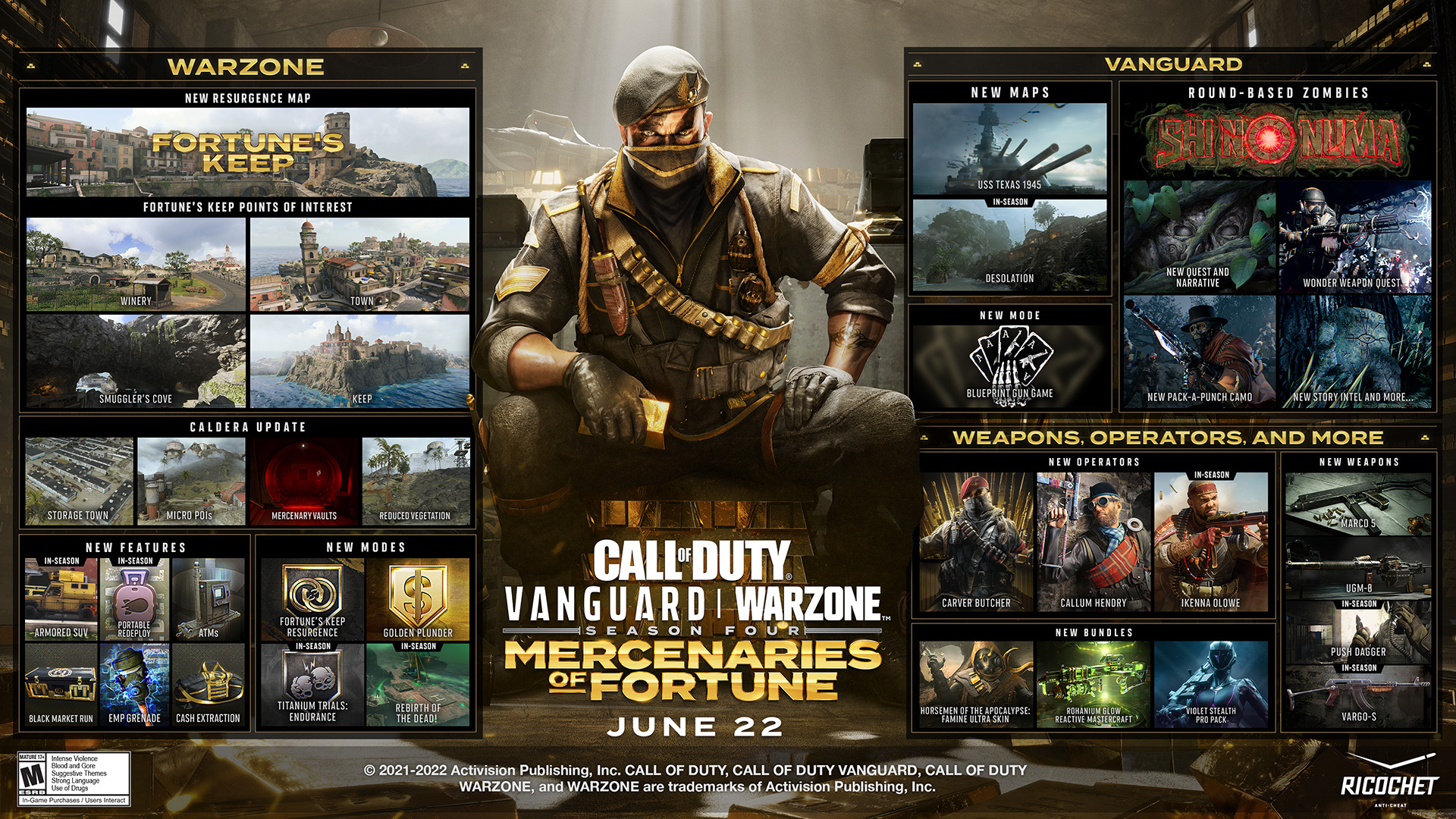 Mercenaries of Fortune brings the brand-new Fortune’s Keep Resurgence map, which Activision says is about the same size as Rebirth Island, and will feature similar close-quarters and respawning action. Fortune’s Keep is themed around a mercenary hideout built on an island, featuring a luxurious town and castle setting. A closeup tour of Fortune’s Keep can be viewed in the reveal trailer for the new map.

Activision confirmed with the Season 4 roadmap that Fortune’s Keep won’t permanently replace Rebirth Island, but the older map will be temporarily unavailable.

For Caldera, players can expect quite a few changes to the island. One of the biggest updates is that Season 4 will remove 50% of the island’s vegetation to improve visibility on the map. In addition to being able to see better, players will also have more looting opportunities. The roadmap details over a dozen points of interests that have been changed or added to Caldera, such as mercenary camps, and multiple buildings at the Capital. The Storage point of interest is also returning from the old Verdansk map.

Golden Plunder will be Caldera’s upcoming limited-time mode. Golden Plunder’s ruleset is similar to Plunder’s Blood Money variant, but with an increased player count of 120. Players will drop more cash at death, and the amount of cash required for a win is increased to $5 million.

Players can expect two maps for Season 4. Coming at the launch of the season is USS Texas 1945, which is the “reimagining” of the battleship map from Call of Duty: WWII. Later in the season, players will get the new Desolation map, which is described as a small-to-medium-sized map set in a dense village littered with destruction.

Call of Duty’s Blueprint Gun Game multiplayer mode makes its Vanguard debut. Just like a standard Gun Game match, players want to be the first to progress through all 18 weapons to win the free-for-all match. Players must eliminate an enemy to cycle to the next weapon, but can set other players back by meleeing them, which will set the opponent back one weapon. 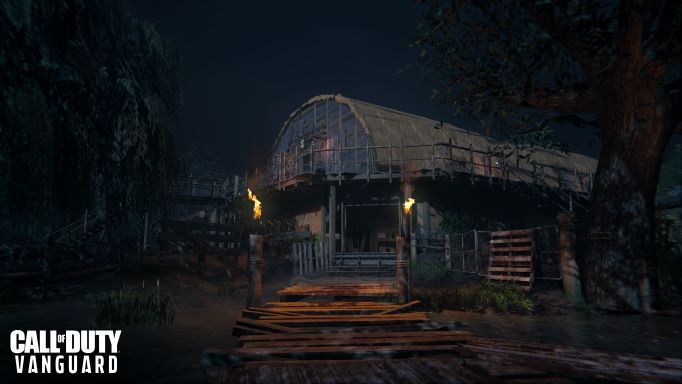 Originally appearing in Call of Duty: World at War, the Shi No Numa map is returning to bring a classic round-based Zombies experience to Vanguard. Treyarch has ditched Vanguard’s objective-style maps in favor of a more traditional Zombies experience, and Shi No Numa is going to be an “enhanced” version of this classic map.

Treyarch says players can expect this version of Shi No Numa to include a new area to explore, side Easter eggs, a Wonder Weapon quest, and more. While Treyarch hasn’t confirmed if it will operate the same, the Wonder Weapon showcased in Activision’s roadmap blog is very similar to the Wunderwaffe DG-2 Wonder Weapon originally featured with the Shi No Numa map. This version will also include Shi No Numa’s traditional Flogger and electric traps, but players will still have access to Vanguard features such as the Altar of Covenants and the Tome of Rituals.

The enhanced map is also getting a new storyline quest tied into Treyarch’s ongoing Dark Aether narrative. This main Easter egg is described as a “multi-step quest culminating in a devastating battle,” and completing the quest in full will reward players with a calling card.

In other Call of duty news, Activision also revealed Warzone 2.0 releases “soon” after the release of Call of Duty: Modern Warfare 2. Here is the first trailer revealed for Modern Warfare 2, and the game’s “Dark Water” campaign mission was also previewed at the recent Summer Games Fest.