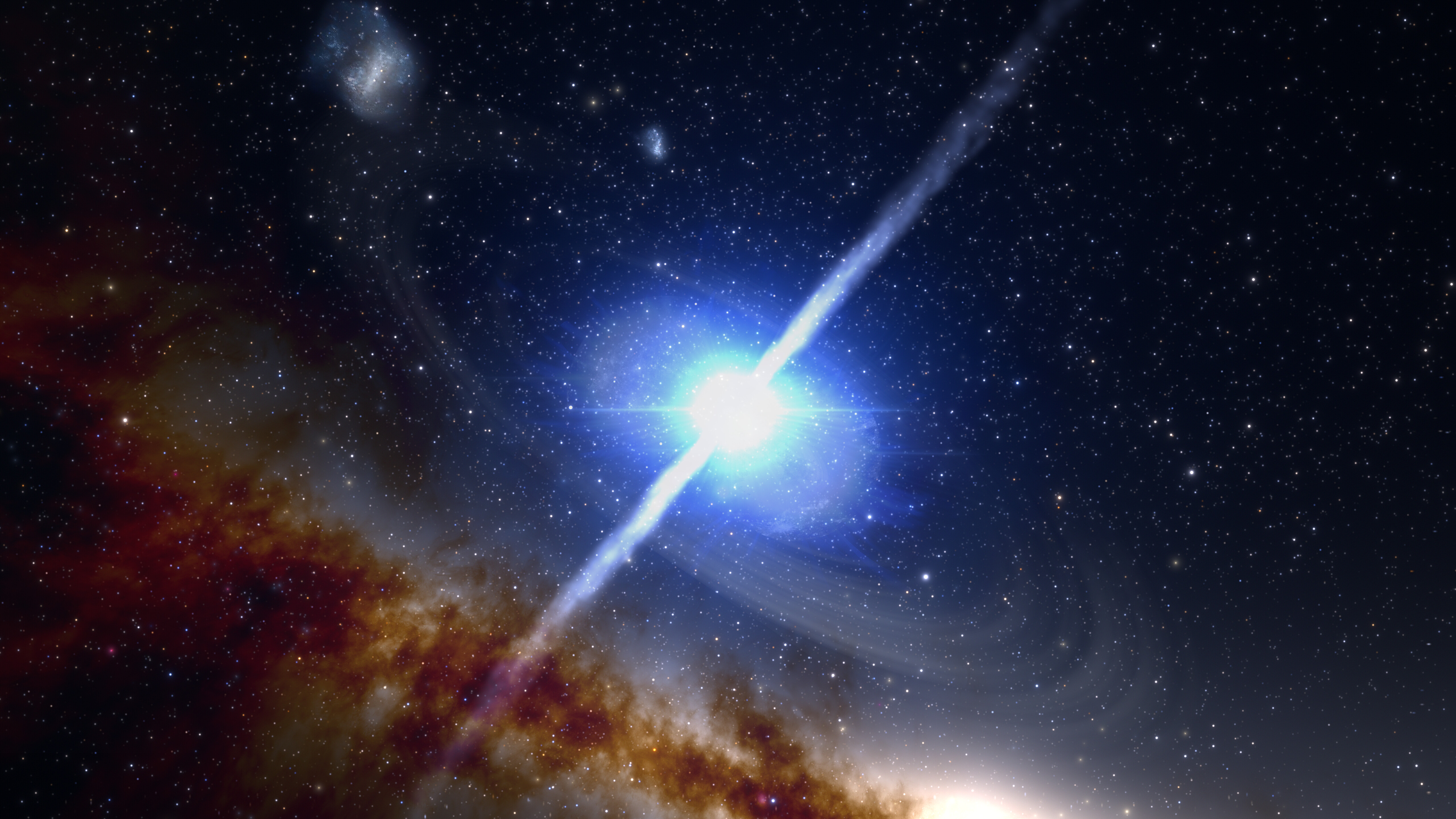 Isolated mysterious blasts of intense energy that previously couldn’t be traced back to galactic sources could originate from incredibly dim galaxies located as far away as 10 billion light-years.

An international team of astronomers used some of the most powerful ground and space-based telescopes  —  including the Gemini North telescope in Hawai’i and the Gemini South telescope in Chile  —  to trace the origins of these “castaway” short gamma-ray bursts to incredibly distant galaxies.

“Many short gamma-ray bursts are found in bright galaxies relatively close to us, but some of them appear to have no corresponding galactic home,” study team member Brendan O’Connor, an astronomer at both the University of Maryland and George Washington University, said in a statement. (opens in new tab) “By pinpointing where the short gamma-ray bursts originate, we were able to comb through troves of data from observatories like the twin Gemini telescopes to find the faint glow of galaxies that were simply too distant to be recognized before.”

Related: Gamma-ray bursts might be much rarer than we thought, study suggests

The findings imply that gamma-ray bursts that are launched when incredibly dense collapsed stars  —  neutron stars  —  collide with each other and merge may have been more common in the past than previously believed.

Because these mergers are believed to create cascades of nuclear fusion processes that forge heavier elements and metals like gold and platinum, this means that the early galaxies may have been richer in precious metals than currently predicted.

After Swift’s Burst Alert Telescope detects a gamma-ray burst, the observatory’s X-ray Telescope uses the burst’s X-ray afterglow to trace its location. Following this, more accurate locations for the gamma-ray bursts are obtained by the Lowell Observatory.

Studies involving these afterglows have found 43 short gamma-ray bursts that do not appear to be associated with a galaxy and instead look as if they originated from relatively empty interstellar space.

One suggested solution to this mystery sees the colliding neutron stars forming as a binary pair in a distant galaxy and then drifting together into interstellar space. They eventually merge billions of years later.

Another idea  —  and the one O’Connor and his colleagues focused on testing — is that the neutron star mergers that launched these seemingly isolated gamma-ray bursts actually occurred billions of light-years away, and thus long ago, when the universe was just around 3.8 billion years old. Because of this incredible distance, the origin galaxies now appear extremely faint from our position on Earth.

“We felt this second scenario was the most plausible to explain a large fraction of hostless events,” said O’Connor. “We then used the most powerful telescopes on Earth to collect deep images of the gamma-ray burst locations and uncovered otherwise invisible galaxies 8 to 10 billion light-years away from Earth.”

The team chose the twin 8.1-meter Gemini telescopes because their locations in opposite hemispheres allow for the entire sky to be surveyed, something essential to follow up on gamma-ray bursts. With the Gemini data, the team was able to pinpoint the source of 17 out of 31 castaway gamma-ray bursts they investigated.

As well as solving the mystery of castaway gamma-ray bursts, the findings could help astrophysicists who are attempting to understand the chemical evolution of the universe.

“This pushes the timescale back on when the universe received the ‘Midas touch’ and became seeded with the heaviest elements on the periodic table,” O’Connor concluded.

The team’s research is published on the online preprint repository ArXiv. (opens in new tab)