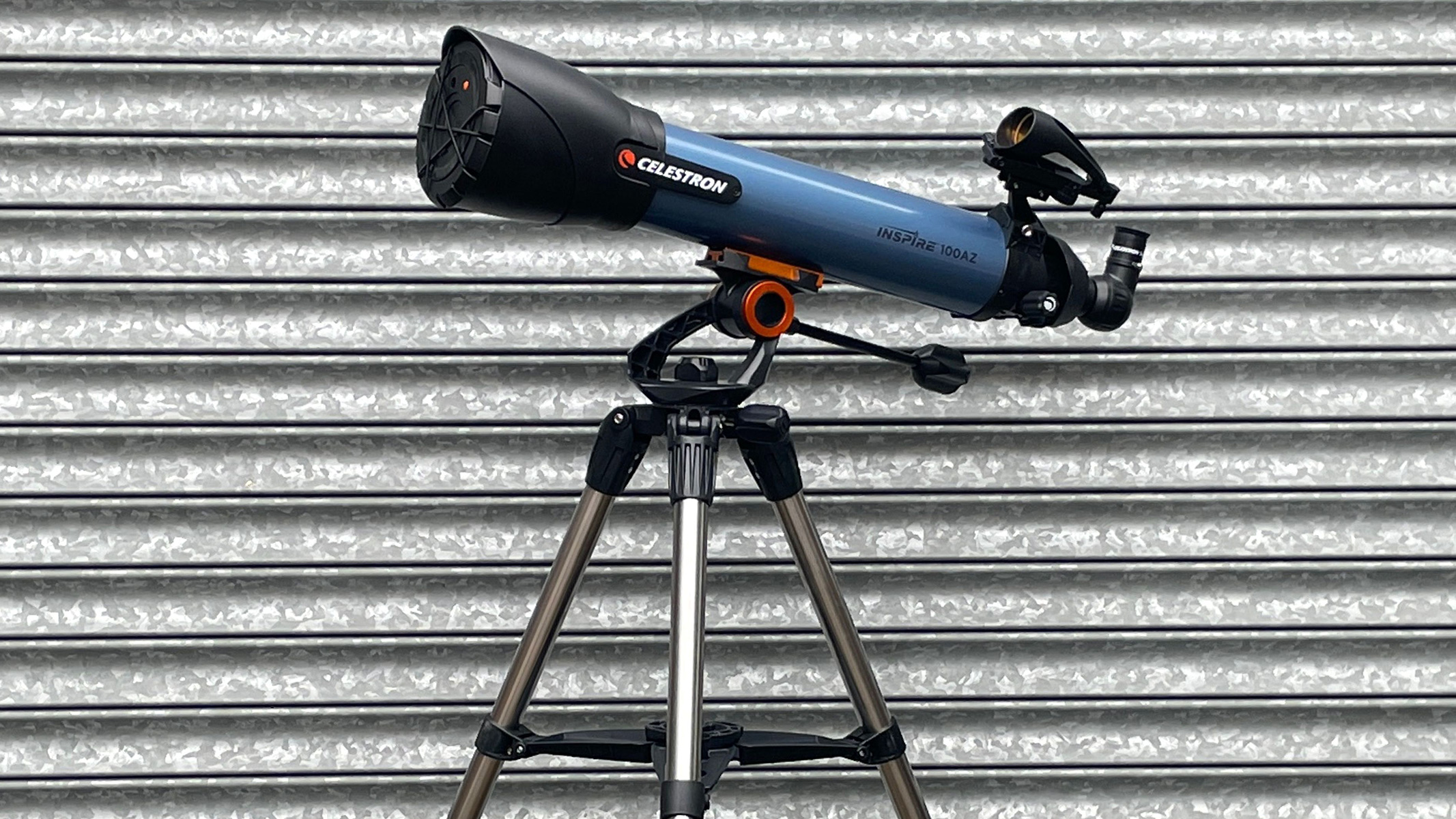 The Celestron Inspire 100AZ telescope ($359.95/£249) is worth investigating if you want to get great views of the moon, planets and more while experimenting with some basic astrophotography.

A basic 4-inch/100 mm refractor, it’s got no ‘go-to’ features so you’re going to have to be confident enough to find your own targets in the night sky.

If you’ve ever thought about taking images of the moon then you’ll love the innovative smartphone camera mount hidden in its dust cap. It’s a neat way of positioning your smartphone over the eyepiece with any slippage, though beyond this novelty is a good value telescope that gives good views of the moon, planets and the deep sky.

An achromatic refractor with a 4-inch/100mm aperture and a reasonably short focal length of 660mm, the Celestron Inspire 100AZ is designed to be used at home by beginners for planets, the moon and deep sky objects. It’s perched on a simple altazimuth mount that moves side to side and up and down, with a panhandle to find the exact position you want and to lock it in position.

A smartphone straps to one side using elasticated cords while an eyepiece fits in the other. (Image credit: Jamie Carter)

Additional kit that comes with telescope

The Celestron Inspire 100AZ is fairly lightweight. Weighing 20 lbs./9.07 kg in total, it’s not a heavy telescope by any means, but the 26-inch/660mm long optical tube and the large tripod does give it a reasonably large footprint. That said, it can be constructed and deconstructed quickly and easily, so could definitely be put in the back of a vehicle and taken on trips to dark sky destinations.

It also comes with a StarPointer Pro finderscope and also a 90º image erect diagonal, which makes it more convenient and comfortable to view objects at the zenith.

Rising in the east just as we started the review, Saturn was easy to locate using the bullseye-style finderscope and the 20mm eyepiece. A bright image with lots of detail can be had through the 20mm eyepiece, but not so the 10mm, which was consistently blurry in comparison. We found the same at super-bright Jupiter, where wide-field views revealed a purplish halo around the giant planet. However, this chromatic aberration ‘false’ color’ is fairly minor on the 100AZ and much less distracting than on some cheaper rival refractors. Ditto for the moon, which we observed from a crescent through its full moon phase and got some excellent close-ups of its craters, though a purplish line around its limb was visible, though not dominating.

Move deeper in the cosmos and the 100AZ carries on its good work, clearly showing Andromeda (M31) and some of the brighter star clusters, though it lacks the aperture to go exploring the true deep sky.

The Celestron Inspire 100AZ is really easy to set up. The telescope tube itself attaches to the tripod mount using a Vixen-style dovetail plate, so it’s simple to set up and take down. Unfortunately, the altazimuth mount is of average quality, lacking precision. For example, the left-right swivel is stiff and needs to be extended well beyond the target because it recoils slightly when the panhandle is let go of. However, once in place the altitude movement is more precise and can be locked into place using the panhandle. Thanks to the relative solidity of the mount it’s then possible to simply nudge the eyepiece slightly to follow, say, the moon as it begins to drift out the field of view.

The tripod has an accessory tray that also acts as a stabilizer, upon which you can store a couple of eyepieces in custom-made slots, which is handy. However, something it also has here is a red light. It points downwards and can light up the accessory tray on-demand, though you can just as easily remove it since it’s actually just a red flashlight.

If that’s an unusual and clever design then so is the Celestron Inspire 100AZ’s innovative dust cap. The idea is that a smartphone can be lashed to the front and secured in position with its camera over a circular hole in the dust cap. That works well, with elastic straps provided to lash a smartphone into a fixed position. It’s then necessary to remove a small cap in the dust cap and insert the top of the eyepiece, which then has to be secured using a couple of tiny thumbscrews.

The rack and pinion focuser is easy to grip when wearing gloves, but poor quality. (Image credit: Jamie Carter)

With everything snugly in place, the eyepiece can then be inserted into the diagonal with a smartphone perfectly positioned to begin taking a focal photographs. It works well, though it pays to be quick about setting it up because once you’ve lashed your smartphone and secured the eyepiece your target will have drifted out of view. The only way to get it back will likely be to use that same eyepiece. Users are advised to get a second 20mm eyepiece.

It’s worth noting that because of its rather unusual hood design the Celestron Inspire 100AZ can’t take solar filters, so should never be used to observe the Sun.

Should you buy the Celestron Inspire 100AZ telescope?

It’s not perfect and it excels and like most refractors, it does its best work with the moon and planets, but the Celestron Inspire 100AZ has more to get excited about than many of its cut-price rivals. The build quality — particularly its tripod — is a step up while its aperture is just enough to allow beginners to explore objects beyond the solar system. The icing on the cake is its clever lens cap, which turns into a smartphone holder for astrophotography, which instantly gives it another dimension. If you want to avoid the bottom of the market but don’t want to spend big, the 100AZ is an appealing solution.

If the Celestron Inspire 100AZ telescope isn’t for you

If you want some help finding your way around the night sky then consider the Celestron StarSense Explorer DX 102AZ, which comes with a smartphone holder and an app to create a night sky sat-nav.

For maximum aperture that can access bright images of deep sky objects try the Celestron StarSense Explorer 8-inch Dobsonian, which is big on size and value. If you’re after something as small as possible and you’re only interested in the moon then a mini-Dobsonian like the Celestron FirstScope 76, should appeal.