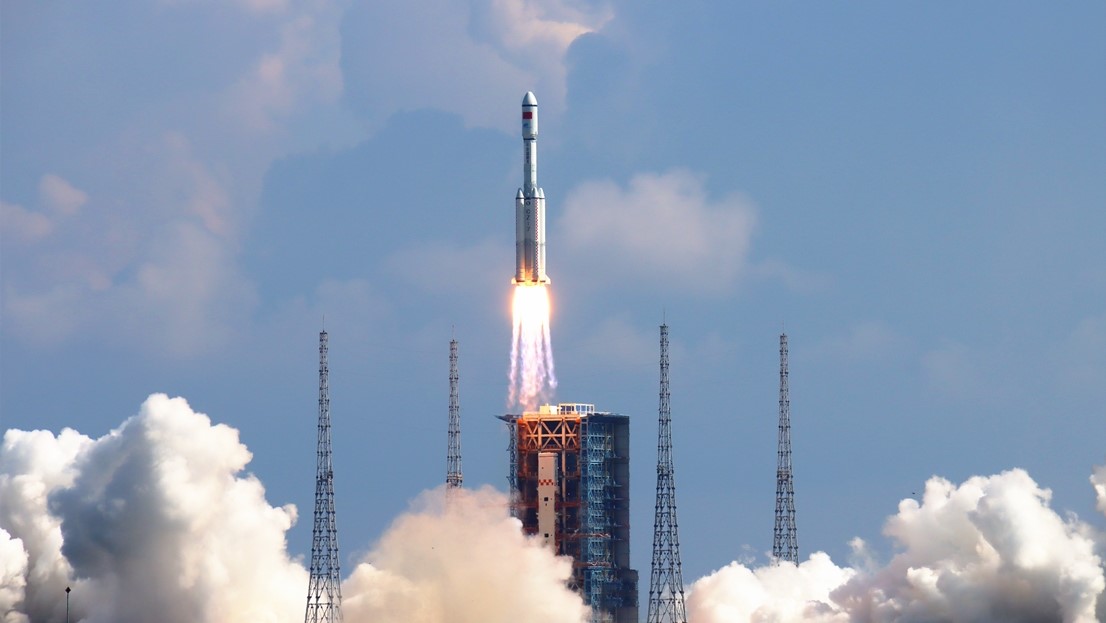 China began researching rocketry before the launch of Sputnik in 1957, but it was not until 1970 that the country launched its first satellite into orbit. Since then, China has launched more than 400 missions, and almost all of them have used the Long March (Changzheng) family of rockets.

Read more about the history of China’s Long March rocket in this countdown.

The rocket used a propellant mix of highly toxic unsymmetrical dimethylhydrazine and red fuming nitric acid and was based on the Dongfeng 3 ballistic missile. It was retired in March 1971 after its second launch.

Long March 2A and 2C

China’s next launcher was the 105-foot-long (32 m) Long March 2A. The two-stage rocket burned a mix of unsymmetrical dimethylhydrazine and dinitrogen tetroxide and was capable of lifting 4,400 pounds (2,000 kilograms) of payload to low Earth orbit (LEO). The first launch failed in 1974, but three further successful launches were conducted in the coming years, sending China’s early reconnaissance satellites into orbit, before it was replaced by the more powerful Long March 2C.

The 138-foot-long (42 m) Long March 2C was developed by the China Academy of Launch Vehicle Technology (CALT) and can carry 8,490 pounds (3,850 kg) to LEO. It can use a number of upper stages for missions to sun-synchronous orbit (SSO) and has launched more than 50 times since its debut in 1982.

The 135-foot-long (41 m) Long March 2D is sometimes referred to as China’s “golden rocket,” having suffered just one partial failure in its 59 launches between 1992 and January 2022.

The three-stage Long March 2E featured four side boosters and was designed for launching communications satellites of up to 7,700 pounds (3,500 kg) into a geosynchronous transfer orbit.

Between its first flight in 1990 and its final launch in December 1995, the rocket suffered two partial failures and one complete failure in its seven missions. It did, however, provide the basis for China’s rocket for human spaceflight.

The Long March 2F was designed to launch a Shenzhou crewed spacecraft into LEO as part of a long-term plan to build a space station. The two-stage, 203-foot-long (62 m) rocket has four side boosters and launches from Jiuquan. It can carry 18,500 pounds (8,400 kg) to LEO and has launched 13 Shenzhou missions so far, including five uncrewed missions. The rocket features a signature launch escape tower on top of the payload fairing.

The fifth Long March 2F sent Yang Liwei into orbit aboard Shenzhou 5 in October 2003, making China only the third country to independently launch a human into space. A slightly modified version of the Long March 2F has also launched the Tiangong 1 and 2 space labs and, in 2020, a classified spacecraft.

The three-stage Long March 3 series rockets come in configurations with zero (3A), two (3C) and four (3B) liquid side boosters and launch from hilly Xichang in southern China. The first launch of the Long March 3B, in 1996, carried the Intelsat 708 satellite but ended in disaster seconds into the flight, veering off course after barely clearing the launch tower and bursting into flames on impact with the ground.

These days, the upgraded Long March 3B/E is the workhorse of China’s Long March rocket family, with an extended first stage and boosters raising its payload capability to 12,100 pounds (5,500 kg). It has launched a range of communications satellites for several countries around the world, as well as deployed the BeiDou Navigation Satellite System (China’s version of GPS), classified satellites and Chang’e lunar lander and rover missions.

Long March 4B and 4C

A Long March 4C lifts off from Jiuquan carrying the L-SAR 01A satellite. (Image credit: CNSA) (opens in new tab)

The Long March was first planned as a backup launch vehicle to the Long March 3 series for launches of communications satellites.

In the early 2000s, China started to develop new cryogenic and kerosene-burning rockets to replace the aging Long March 2, 3 and 4 families. The new two-stage, four-booster Long March 5 rocket is 187 feet (57 m) long and 16 feet (5 m) in diameter. It is China’s largest and widest rocket, capable of lifting 31,000 pounds (14,000 kg) to geosynchronous transfer orbit. The first flight came in November 2016, carrying a new, large communications satellite. The second, in July 2017, failed, grounding the rocket for around 900 days while design problems with the YF-77 engine turbopumps were isolated and fixed.

The rocket has since allowed China to launch its first interplanetary mission, Tianwen 1, to Mars, as well as the Chang’e 5 lunar sample return mission.

The Long March 5B variant has no second stage and is designed specifically to launch China’s three large, roughly 48,500-pound (22,000 kg) space station modules into orbit. The first launch of the Long March 5B put a prototype new-generation crew spacecraft into LEO in 2020 and launched the Tianhe 1 space station core module in April 2021. The first stage of both of these Long March 5B rockets ended up making high-profile, uncontrolled reentries.

Both Long March 5 and 5B launch from a specially built coastal spaceport at Wenchang on Hainan island.

The 95-foot-long (29 m) Long March 6 is the smallest of China’s new-gen launchers. It uses the same YF-100 kerosene-liquid oxygen engine that powers the Long March 5 boosters and Long March 7 core stage and can send 2,380 pounds (1,080 kg) of payload into SSO. Lifting off from Taiyuan in north China, the rocket is used mainly to launch clusters of smaller satellites.

A much larger Long March 6A, which will feature China’s first liquid-propellant core stage with solid rocket boosters, is expected to fly for the first time in the first half of 2022.

The Long March 7 is a two-stage, new-generation rocket designed to launch Tianzhou cargo spacecraft weighing up to 29,800 pounds (13,500 kg) to the Tiangong space station. The rocket launches from Wenchang and has successfully carried out four missions as of February 2022.

The Long March 7A is a three-stage version that is expected to eventually replace the older Long March 3B. While the latter rocket often poses debris risks because it launches from land, the newer rocket would see its expended stages fall into the seas. The first launch failed in 2020, but the second launch was successful in 2021.

The Long March 8 was originally conceived to fill a gap in launch capabilities to SSO, using already developed components from the new-gen Long March 7 and older Long March 3B. However, with the emergence of SpaceX’s reusable Falcon 9, CASC decided on a path that would make the Long March 8 China’s first rocket with a reusable first stage.

The first Long March 8 launched in December 2020 from Wenchang. The 165-foot-long (50 m) rocket has two side boosters and is capable of carrying 9,900 pounds (4,500 kg) to SSO in expendable mode. A second launch took place in February 2022, carrying a domestic record of 22 satellites into orbit, according to spacenews.com. The second Long March 8 flew without the side boosters used in the first flight. CASC says it is aiming to make the rocket reusable by 2025.

The Long March 9 will be China’s version of NASA’s Space Launch System: a super heavy-lift rocket intended to launch large pieces of infrastructure into orbit and even help construct the joint China-Russia International Lunar Research Station.

The Long March 11 is the only solid-propellant rocket in the Long March series. Solid rockets do not need separate tanks for propellant and oxidizer and are simpler and cheaper to design, but once ignited, they burn to completion.

The 68-foot-tall (21 m) Long March 11 had its first flight in September 2015 and can carry 1,500 lbs (700 kg) to LEO. It has also launched from specially converted barges on the Yellow Sea. The Long March 11 is mostly used to launch small satellites into SSO.