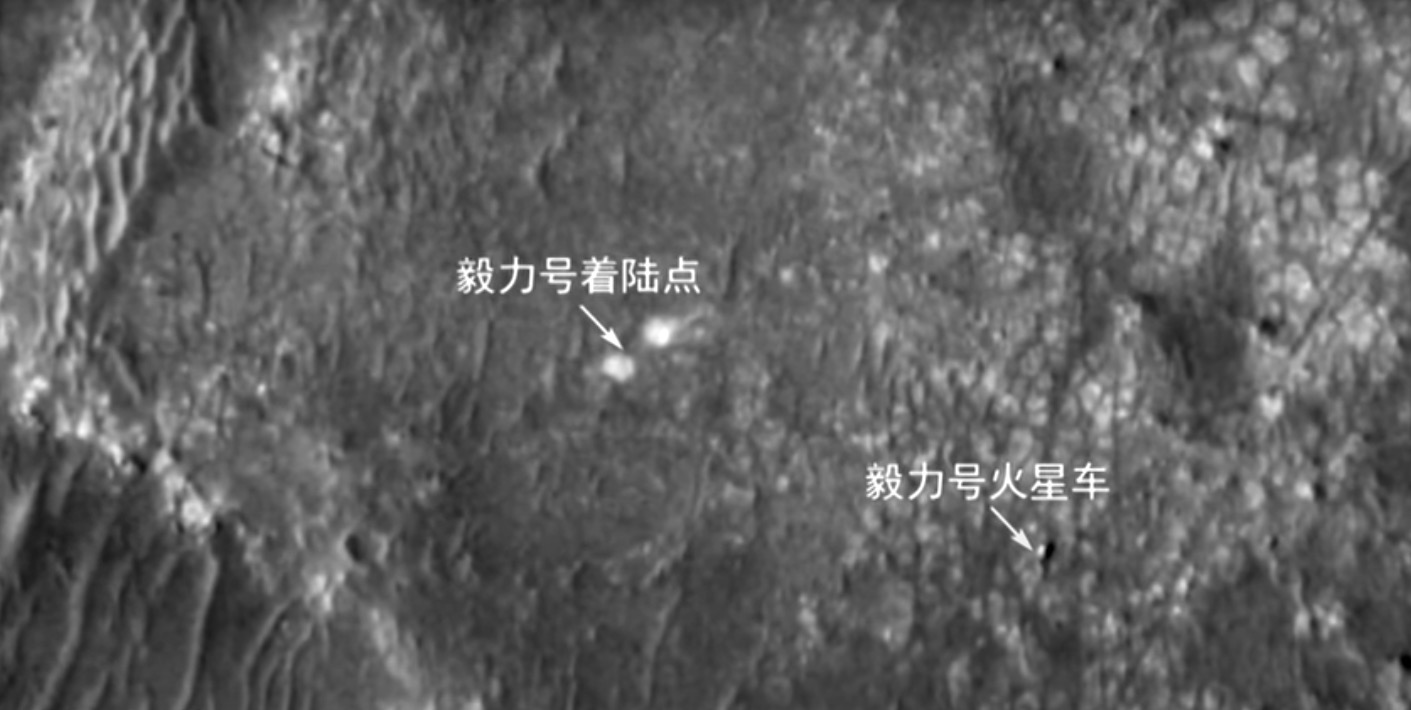 The Tianwen 1 orbiter recently captured photos of the Zhurong rover, its partner on the Tianwen 1 Mars mission, and NASA’s Perseverance rover as the two wheeled robots explored their surroundings.

Tianwen 1 imaged Perseverance on March 7, when the car-sized NASA rover was about 650 feet (200 meters) southeast of its landing site, according to China’s CCTV+. The state-owned broadcaster included that shot in a new 2-minute video highlighting some of the best recent imagery by the Tianwen 1 mission.

China’s Tianwen 1 Mars orbiter captured this photo of NASA’s Perseverance rover (bottom right) on the Red Planet’s surface on March 7, 2022. The other arrow, closer to the center of the frame, points out Perseverance’s landing area. (Image credit: CNSA via CCTV+)

The video stitches together photos that the China National Space Administration released on Thursday (March 24). Among the new shots is an undated orbital view of Zhurong and its tracks. Those tracks snake past Zhurong’s parachute and landing platform, showing that the rover inspected some of the hardware that helped it land safely back in May 2021.

The video also features some photos snapped by Zhurong on the Martian surface. For example, it juxtaposes two selfies taken in May 2021 and January of this year, showing how much dust accumulated on the body of the solar-powered rover during that stretch.

This undated, annotated photo from China’s Tianwen 1 Mars orbiter shows the nation’s Zhurong rover and some of the hardware that helped it land safely in May 2021. (Image credit: CNSA via CCTV+)

Zhurong and the Tianwen 1 orbiter launched together in July 2020 and arrived at Mars in February 2021. Zhurong stayed attached to the orbiter until May, when it separated to perform its historic touchdown, China’s first ever on the Red Planet.

Zhurong has traveled 1.11 miles (1.78 kilometers) on the Martian surface to date, according to CCTV+. Both it and the Tianwen 1 orbiter are healthy and operating normally, the broadcaster added.

Perseverance has been making serious tracks lately, heading toward an accessible section of the ancient river delta that once existed inside Jezero. The mission team is picking Perseverance’s routes with the help of observations made by Ingenuity, the tiny helicopter that landed with the rover on a technology-demonstrating mission and is now doing scouting work for its larger cousin. (Ingenuity is too small to be seen from orbit.)

Tianwen 1 isn’t alone in imaging Perseverance and Zhurong from on high. NASA’s Mars Reconnaissance Orbiter has photographed both rovers over the past year as well, even documenting Perseverance’s harrowing “seven minutes of terror” landing sequence on Feb. 18, 2021.