The second weekend of Call of Duty: Modern Warfare 2’s multiplayer beta is officially live, and this final test period brings PlayStation, Xbox, and PC players together to battle across the maps and modes from the first PlayStation-exclusive weekend, but it also includes the new addition of Ground War.

Weekend two of Modern Warfare 2’s beta includes Team Deathmatch, Domination, Knockout, Prisoner Rescue, third-person mode, and Ground War. Make sure to read our initial Modern Warfare 2 beta impressions to learn all about the maps, new objective modes, and changes to the Gunsmith feature. Third-person mode was added late in weekend one, so we’ll be discussing that along with our initial thoughts on Ground War.

Third-person mode, which was previously featured in the original Modern Warfare 2, returns as a separate playlist with mixed respawn modes. Having this mode come back for the reboot gives players a different way to experience Call of Duty multiplayer, and it should be a welcome addition for those who prefer third-person shooters.

Personally, I find the transition into third-person perspective to feel a bit awkward in Modern Warfare 2. You don’t stay in third-person the whole time, as the perspective switches and zooms to first-person when aiming down sights. This would feel more like a true third-person mode if we got an over-the-shoulder perspective for aiming instead. Any players like me who easily get motion sickness might want to be wary of the particular playlist, as the transition between zooming in and back out can feel a bit too much. Motion sickness definitely crept up on me here. Of course, I can often be fairly sensitive to motion, so this is something that probably won’t affect a majority of players.

Overall, this might be a fun bit of change for some players. It also offers a better look at the character models, which will probably have fancy operator skins in the shop post-launch. This means players who aren’t super sensitive to motion sickness will be able to better enjoy any expensive skins they buy.

A small taste of Ground War

Standard Ground War for Call of Duty: Modern Warfare 2 will be played out across 32v32 matches, but currently, the only Ground War option for the beta is the game’s new Invasion mode. This mode includes a scaled-down 20v20 version of the Ground War maps Sarrif Bay and Sa’id.

Sarrif Bay is described as a 32v32 map set at a large port, with plenty of opportunities for combat on land, sea, and air. However, Invasion trims away the areas for water combat. You can see the docks, but there are no boats to take for a test drive. In Invasion, you’re primarily fighting through the streets and buildings of the port’s city.

The portion of Sa’id used for Invasion has a similar feel as Sarrif Bay with a city locale with plenty of verticality. Some rooftops are close and others have bridges to keep moving across the building tops, but lots of action also takes place in the streets with vehicle combat. Just like Invasion on Sarrif Bay, this experience doesn’t include boats or any water combat. There is a bit of water on the outskirts of the map, so technically players can go for a swim, but so far, this seems to be a mode without boats or any real opportunities for water combat. 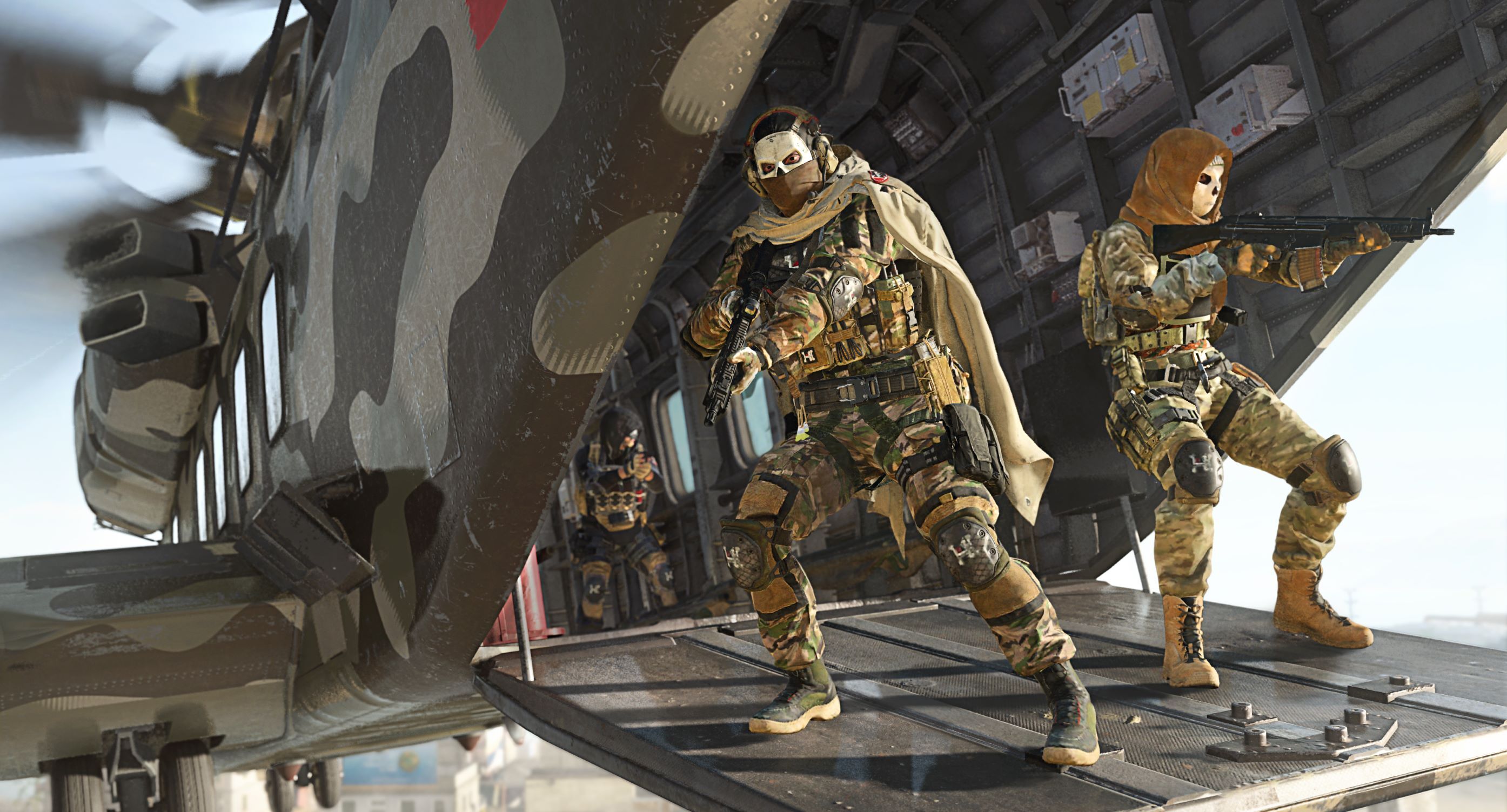 Invasion mode is a large-scale deathmatch that is played alongside Modern Warfare 2’s new advanced AI. Friendly AI teammates are marked on the minimap as circles, while human teammates appear as triangles, and additional enemy AI and human players are distinguished in red on the minimap.

In this mode, vehicles are available and each team will start with AI soldiers. Eliminating players will earn a team points, and the team with the most points will win the match once the time is over.

Players earn points for their team by doing the following:

Over time, the match escalates. Additional elements are added to the combat like armored soldiers and killstreak drops, so there’s a real sense of progression to the action, which ensures matches don’t feel too lengthy. I also appreciate that taking down enemy streaks or vehicles contributes toward the score in Invasion, but overall, I do feel like this mode centers too much around bot-farming. Modern Warfare’s new “advanced AI” does move and react a bit more intelligently than the NPCs in the past, as I watched them hustle to take cover and look around in a slightly more aware state, but they still are noticeably bots in the real heat of the action. This will be a good mode for players just starting to dip their toes into the Call of Duty franchise, or as a less-competitive mode for players just looking to level up their guns in large-scale matches, without the pressure of capturing the objective points found in traditional Ground War objective mode.

With that said, this is still a decent taste of what to expect with Ground War. Modern Warfare 2’s new equipment and movement mechanics are better demonstrated on the large-scale maps. There are more opportunities to mantle or hang from ledges, including firing a pistol while hanging. There are more killstreaks and opportunities to use rocket launchers, and it has all of that chaotic gameplay one would expect from Call of Duty’s Ground War. Hopefully, standard Ground War mode will be added later in the weekend so players can go out for some boating adventures.

Here are all the Modern Warfare 2 changes Infinity Ward has discussed following the first weekend. This includes the now-implemented fixes for map exploits and improved visibility while in gunfights, but other changes may not roll out until launch. The visibility in gunfights is definitely an improvement from weekend one, as there is way less muzzle flash and smoke effects blocking the view of the targeted player.

This second weekend of the beta is currently only available for those on Xbox and PC who have preordered Call of Duty: Modern Warfare 2, while it’s an open beta for everyone on PlayStation.

For the final days of the beta from September 24 to September 26, anyone will be able to jump in, regardless of their platform or if they preordered the game. However, Xbox Live Gold is needed to play the Modern Warfare 2 beta on Xbox, but PS Plus is not needed for those on PlayStation.

Call of Duty: Modern Warfare 2 is scheduled to release on October 28 across PS4, PS5, Xbox One, Xbox Series X|S, and PC.