Deathloop Is Building On Dishonored’s Ideas, But Is An Exciting Evolution

In trying to explain Deathloop, game director Dinga Bakaba often ends up evoking It’s Always Sunny in Philadelphia’s Charlie, standing in front of a wall covered in crumpled documents that have strings tied between them as he attempts to untangle the Pepe Silvia conspiracy. But instead of looking unhinged and deranged, Bakaba excitedly unravels the intricacies of an assassination puzzle Arkane Studios has been crafting for four years–and it sounds bonkers.

Arkane is the video game equivalent of a high-end timepiece maker. At a cursory glance, the gameplay of its titles look familiar–I daresay ordinary, even. But intricate systems begin to reveal themselves and it quickly becomes apparent that underneath the elegant exterior is a complex network of interconnected gears, all working to keep a dynamic and reactive world running smoothly. In Deathloop you are Colt, a proverbial wrench with an array of guns and supernatural abilities that is repeatedly jamming himself between these gears to make it all go up in smoke.

The going train of the whole machine is, ironically, a time loop–a Groundhog Day-style reset triggered on death. And to break it, Colt needs to kill eight key targets called Visionaries. Those familiar with Arkane’s Dishonored series will no doubt be able to draw parallels as this format is a signature part of the studio’s immersive sims, which give players a great deal of freedom in approaching how to assassinate key targets. However, things get tricky with the introduction of Julianna, another assassin who is out to stop Colt. Except sometimes, it sounds like she’s trying to help him. Also, she’s a Visionary. And it kind of seems like the pair has a lover’s quarrel thing going on. Oh, and after each reset, Colt’s memory is wiped because amnesia is a side-effect of the loop. And Julianna can be controlled by another player. See what I was saying about simple things quickly becoming incredibly complicated? Carolllllllll.

Let’s unpack it one cog at a time, starting with Blackreef, the setting of Deathloop. Art director Sebastien Mitton describes it as a “northern European island shaped by harsh natural conditions, where derelict concrete bunkers and retro sci-fi structures contrast with lush pop interiors and street art.” That is all to say Blackreef is incredibly striking from a visual standpoint. Like Dishonored’s Dunwall or Karnaca, Blackreef already looks to be a memorable setting that paints natural canvases of stone and steel with flourishes of color, making for an eye-catching contrast–it’s like a modern-day graffiti artist and interior designer got let loose in the 1960s.

Interestingly, while watching the gameplay, as Colt skulked through the streets of Blackreef, the two distinct vibes looked to be in perfect harmony. Arkane has always had an eye for creating structures that make you want to stop and take a moment to really examine them from all angles and I found myself wishing I could pause the gameplay demo to hop around the environment using Colt’s teleport ability Shift (think Blink from Dishonored… because it basically is) to poke and prod at environments from new perspectives. As with previous Arkane games, I think what brings the two aesthetics together so elegantly is the sense of scale, at least outside. The dark, muted tones of the architecture jut into the sky at night, looking like strange obelisks. But bright spotlights are carefully placed to draw attention to the cool visual elements in any given scene. There was always a flatly colored space my eyes rested on, like a towering grey building, but then I could trace my sightline across the environment, snaking from a bright red wall that should feel out of place to massive white text on a brick wall that said time was my plaything, to an impromptu firework show that lit up the night sky, all guided by the spotlights moving my eyes from one point to another.

But why are there weird people that have painted their bodies and faces on Blackreef? That’s somewhat of a mystery, but the location is essentially the scene of an infinitely looping spring break for assholes. All manner of debauchery is happening on Blackreef and, because everyone knows there’s a time loop and anything they do will be undone, they’re all behaving like, well, spring breakers that know there’s truly no consequence to anything. Colt, for some reason or another, is done with all of it, hence his mission to break the loop and get out.

A particularly noteworthy part of Deathloop is its structure. Blackreef is broken up into four areas, which can be played at multiple times of the day. In each time period, there are different opportunities; a Visionary may appear at one time but not another, for example. Or a different one may appear in the morning compared to the afternoon. Or you may discover an event is taking place at a specific time and that crashing it is to your benefit. There could be a shortcut that gets you from one place to another quicker at night, and at any time you may stumble across a piece of information–be it a code to a safe or the location of a key to a lock. That could inform where you should be at what time and what you need to do to get you one step closer to your goal.

Time passes when you move from one location to the next, but it’s possible to play through an area at your chosen time of day over and over–think of it as a meta-loop within the larger loop. If you die, provided you have a specific power, you can redo the enemy encounter that killed you and even collect your belongings from your corpse. However, three deaths do reset the entire loop. So, the name of the game becomes playing through these locations repeatedly at different times to pick them apart, finding and parsing the opportunities they provide, focusing on them and getting the information you need out of each one, and then incorporating that into an overall plan that requires you to kill all eight Visionaries in one single run through a day. Basically, Deathloop is teaching you how to speedrun Deathloop, and that is a fascinating concept for a game.

Naturally, combat is a core pillar of the game and, at the risk of being reductive, it looked a lot like Dishonored and Dishonored 2’s. As a big fan of both of those games, that is music to my ears, because those games beautifully combine intense first-person shooting and creative powers that let you move around the environment effortlessly, while manipulating enemies to setup a gruesome domino effect of people being ganked, flung to their deaths, or eviscerated by explosives. And Arkane definitely wants to encourage some of that murder ballet–there’s no restriction on ammo, as vending machines freely dish out bullets (what use is there for money when time is reset?). Powers, meanwhile, include some old faithfulls like the aforementioned Blink/Far Reach, as well as Windblast (Karnesis in this game). One of my old favorites, Nexus, is back–you may remember it as Domino from Dishonored 2, the power that lets you link the fates of multiple people together, so if you put a bullet in one of them, they all go down. One particularly interesting new addition is Aether, which makes you invisible, blowing open the potential for making mischief in Blackreef.

The big question that remains for me is how much value there is in playing Deathloop stealthily. I love stealth games and have perfect runs of all the Dishonored games, but based on what I saw, Deathloop feels like it’s geared a little more towards death and destruction. There are certainly moments where sneaking is in order, but enemy bodies simply evaporate–and carefully removing all traces of yourself is a key part of the Dishonored series, as well as stealth games as a whole. Nevertheless, the nature of the game also means that if you’re able to acquire all the information you need in the guns blazing outings through Blackreef, you may develop the perfect path to take out the Visionaries to break the loop with clean hands, which is an exciting prospect. 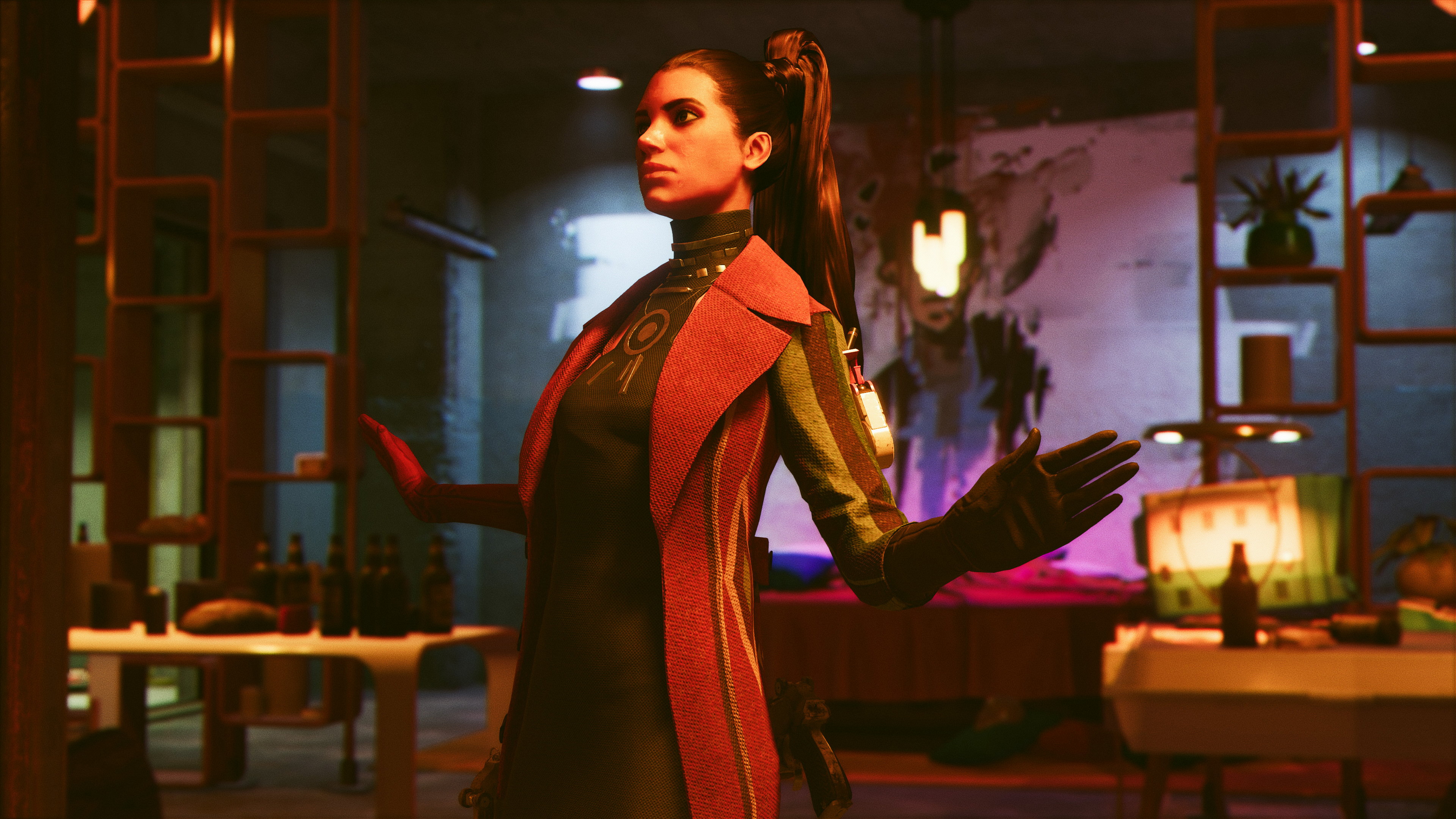 The final cog in the gameplay machine is the RPG layer, which intersects with the character growth mechanics to ensure that these loops always feel rewarding to your development of Colt. Arkane clearly stated that the intent is for players to take Colt, an ordinary run-of-the-mill soldier, to John Wick levels–except with superpowers. To enable that sense of growth, there is a resource called Risidium, which can be used to lock in powers and weapons. With each loop you’ll be able to grow a permanent arsenal so that, when the time comes, you’ll be able to put the hurt on people. As Winston once said to John Wick, “Para bellum.”

The other big gear at work in Arkane’s machine is multiplayer. As previously mentioned, Julianna is an ever-present threat. As a Visionary, she is very much trying to stop Colt from breaking the loop, but she’s also weirdly helpful in her own way. She constantly chides and mocks Colt as he goes through his loops, but each verbal jab usually knocks Colt towards something he needs to see or should be doing. Honestly, the relationship between Colt and Julianna is one of the most intriguing things in the game. There is a history between them that Colt cannot remember and a big part of the narrative is getting to the bottom of it. Julianna is a constant in the game, so whether you like it or not, she is always going to be gunning for you. However, you can choose if you’d like her to be AI-controlled or if you’re willing to let other players invade your world to play as her. Arkane wants the player-versus-player clash between Colt and Julianna to create watercooler moments between players, and given the open-ended nature of Deathloop’s gameplay systems, that definitely seems possible. I can’t think of anything more terrifying–or exciting–than having people as capable as those that make the badass high chaos Dishonored combat videos on the hunt for me as Julianna.

Addressing the elephant in the room, Bakaba is reluctant to call Deathloop a roguelike, despite various qualities the game shares with others in the genre. Instead, he’s more of the mind that the players should define what the game is. After all, that’s exactly how the so-called immersive sim genre the studio has become masters of came to be. Deathloop is very much built on design ideas that Arkane has worked with for previous titles and leans into its own narrative and artistic strengths, but there’s something more there too. Regardless of what it ends up being called, there’s definitely the seed of something new and exciting in Deathloop.