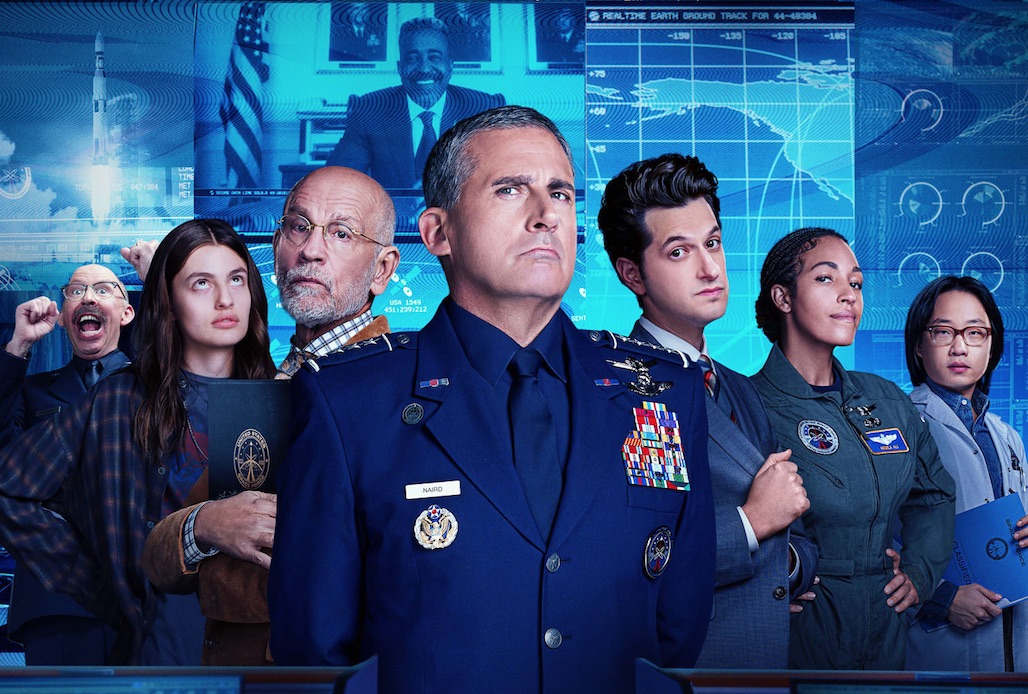 The “Space Force” TV series (not to be confused with the real-life U.S. Space Force) first launched on Netflix back in May 2020, and chronicled the misadventures of Mark R. Naird (Steve Carell), a four-star general who’s assigned command of a polarizing division of America’s military aimed to bolster the nation’s dominance in space and getting boots back on the moon.

Now for “Space Force“ Season 2, General Naird is dealing with a new administration in the White House that’s skeptical about this freshly-formed unit of the armed forces. With mounting scrutiny regarding the bumbling organization, Naird and his offbeat crew of scientists and space voyagers are given five months to prove their worth before the President cancels his position.

Series regulars Jimmy O. Yang, John Malkovich, Ben Schwartz, Tawny Newsome, Diana Silvers, Lisa Kudrow, Patton Oswalt, and Don Lake are all on board for Season 2. Some behind the camera changes have been made this time around with Canadian screenwriter Norm Hiscock (“Parks & Recreation,” “Brooklyn Nine-Nine”) uniting with series co-creator Greg Daniels as co-showrunner.

Ken Kwapis, the award-winning director of such Hollywood feature films as “He Said, She Said,” “A Walk in the Woods” and “The Sisterhood of the Traveling Pants,” has signed on to helm all seven episodes. In contrast, the premiere season of “Space Force” was shot by a variety of directors. Here, Kwapis delivers a master class on deftly orchestrating an ensemble cast that’s operating at maximum comedic thrust.

Besides working with Carell and Daniels directing the pilot episode of “The Office,” the Hollywood veteran’s impressive resume includes directorial gigs for “The Office,” “Malcolm in the Middle,” “Freaks and Geeks” and “The Larry Sanders Show.”

Space.com spoke with Kwapis about the synthesis of his talented actors, what’s new for the second season, balancing jokes with grounded drama, creating chemistry and improvisation on set, and if Netflix might approve a “Space Force” Season 3.

Space.com: How did you score the ‘Space Force” gig and why were you the best person for the job?

Ken Kwapis: Well, Season 2 of  “Space Force” was an important reunion for me. It was the first time I’d working with Steve and Greg since “The Office.” I didn’t work on the first season but I did enjoy it. Steve and Greg told me that they tried to create a show that was as visually different as possible from “The Office.” They encouraged the directors to put on their Stanley Kubrick hats and create things that were visually bold and they did.  The first season is very striking in that way.

For Season 2 they wanted to focus less on the look of the show and more on the characters and the ensemble feeling and that’s why they enlisted me. They wanted to get to each character’s emotional arc and the arc of the Space Force team.

Related: The best sci-fi movies and TV shows to stream on Netflix

Space.com: What changes can fans expects in “Space Force“ Season 2?

Kwapis: One of the great things about the scripts in the new season is that the stakes are high. In the first episode we learn that Space Force is on probation and Steve Carrel’s character has a few months to prove himself or he’ll be replaced. It’s an underdog story and my job as a director is how to get the audience involved. And every character is very well drawn this season.

Malkovich’s character Dr. Mallory is fighting to maintain his integrity as a scientist as the budget is slashed. And Diana Silvers playing Erin Naird, Steve’s character’s daughter, is struggling to figure out what direction her life should go in. Tawny Newsome’s character battles with PTSD after the near-calamity on the Moon. And Jimmy O. Yang’s character pining after Tawny and worried that he’s in a go-nowhere relationship with her.

They all have a distinct journey and for me, the job is how to balance the character comedy and the emotional content. The best kinds of scenes are ones that start in one direction, then surprise you and go in another. What appears to be a comic moment turns on a dime and suddenly it’s an emotional moment.

All credit to the writers and to Greg, Steve and Norm for overseeing the stories. They gave me such rich material to work with. One of the things I hear from viewers who love the second season is that it does have strong emotional content.

There are a lot of laughs but there’s also a lot of heart. Being able to deliver that is in my skill set. Sometimes I feel like my superpower as a director is that I know how to take a comedic scene and ground it in reality, and conversely, I know how to take a dramatic scene and find the humor hiding in it. It’s also a first for me in that I’ve never directed an entire season of anything.

A scene from season 2 of “Space Force” on Netflix. (Image credit: Netflix)

Space.com: What sort of improvisation occurred while filming and did you encourage it?

Kwapis: Oh, I definitely encouraged it and there were some major league improvisers in the cast. Don Lake for example. He’s so brilliant at improvisation. He can take any line of dialogue and spin twenty-five different variations of it without breaking a sweat. And Tawny Newsome, like Steve Carell, a Second City alum. Just a marvelous improviser. Ben Schwartz is able to pull things out of a hat that surprised me take after take. Everybody in the core ensemble had strong improv skills.

The goal for me was to get all these different actors to see they were part of the same family. As a director I tried to shoot scenes where the characters are in the frame together so I often favored two-shots, three-shots, four-shots, just to reinforce the idea of chemistry. It’s not about my joke versus your joke, it’s about the energy between people. That’s the secret weapon of Season 2 as far as I’m concerned.

Space.com: The practical joke montage is the series is a fan favorite. Were there a lot of goofy pranks going on with the actors between takes?

Kwapis: There weren’t as many as there might have been if we’d shot this in the pre-pandemic era. Because of COVID protocols it was a little more restricted. Someone should right a book about famous pranks done on sets over the years.

Space.com: What was your gateway into space travel and sci-fi. growing up and how did they serve you on “Space Force“ Season 2?

Kwapis: I was definitely a fan of science fiction movies as a kid, but not so much sci-fi novels. I was always captivated by films about space travel and in addition to famous movies like 2001, I was also a super fan of “Silent Running.” I remember when I first saw the film in 1972 I was so taken by Joan Baez’s theme song in it. I was a big “Lost in Space” fan too.

“Space Force” Season 2 is pretty Earth-bound compared to Season 1. What I really drew upon was my experience directing a number of wonderful workplace comedies, certainly “The Office,” but also a show I helped developed for NBC, “Outsourced.” The only broadcast network show ever set in India.

Going back to the early ’90s, I helped launch “The Larry Sanders Show” for HBO.  And I love films about a group of people having to work together to solve a problem, like “The Flight of the Phoenix” and “Only Angels Have Wings.”

Space.com: Patton Oswalt has an extraordinary cameo in Season 2 as Mars mission astronaut Capt. Lancaster. How did that performance play out?

Kwapis: That’s a great example of a scene that seems at first to be simply a comic scene. Patton enlists Diana Silvers to go find different types of food so he can enjoy some human food vicariously while he’s en route to Mars. Over the course of the sequence it’s revealed that he also misses a lot about being on Earth and that he’s actually quite depressed being isolated in this capsule. All of that is something that Diana’s character is unprepared to deal with to the point where she wonders if Patton’s character is suicidal. All credit to the writers for taking us down a comedic road then taking a terrific left turn into something that’s more poignant. Patton did the heavy lifting on that. I reminded him that it’s ultimately a scene about being lonely and isolated. It’s like that David Bowie song, “Space Oddity.”

Space.com: A lot of fans are excited to see how the Space Force team is going to deal with the season finale cliffhanger! Will there be a “Space Force“ Season 3 and will you be a part of it?

Kwapis: I can’t say too much except that we’ve received such a lot of positive feedback from Season 2 that it would be a shame if we couldn’t continue.

« Here is how studying tokens’ price history helps patient traders enjoy consistent average gains. » What Happens When an Overseas US Military Base Is Evacuated?