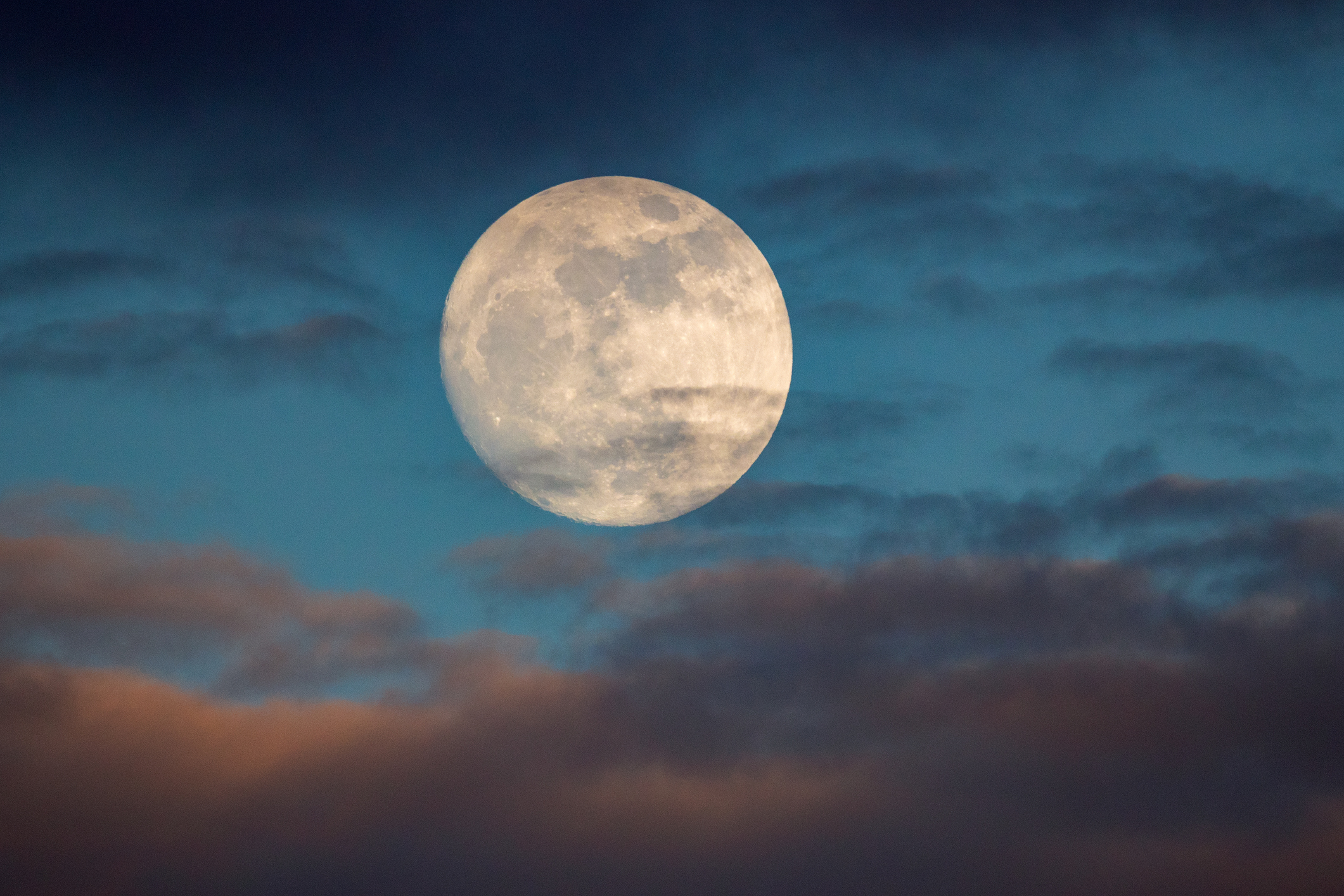 Nine hours and 38 minutes later, the moon will officially turn full. Though full moon theoretically lasts just a moment, that moment is imperceptible to ordinary observation, and for a day or so before and after most will speak of seeing the nearly full moon as “full”: The shaded strip is so narrow, and changing in apparent width so slowly, that it is hard for the naked eye to tell whether it’s present or which side it is on.

So, when the moon shines down on your neighborhood on Wednesday night, keep this in mind: What you’re looking at is not precisely a full moon, but a waning gibbous moon, already many hours past its stage of full illumination.

Related: Supermoon: What is it and when does it occur?

Still, newspapers, radio and TV stations will almost certainly urge the public to step outside that night and witness the “rare” spectacle of the biggest and brightest full moon of this year — better known as the “supermoon,” a moniker that was all but unknown to most a little over a decade ago

So, just where did it come from, and how did it become so popular?

We can thank astrologer Richard Nolle for the supermoon terminology. He first used it in a 1979 edition of Dell Horoscope, a now-defunct periodic American magazine covering modern astrology, once calling itself “the world’s leading astrology magazine.”  For his supermoon designation, Nolle wrote that “a full moon which occurs with the moon at or near (within 90% of) its closest approach to Earth in a given orbit (perigee)” would get the “super” branding.

And that is the reason — based solely on Nolle’s definition — why Wednesday’s full moon will be labeled as “super.”

Interestingly, while this term made little impact in 1979, it suddenly got a lot of attention on March 11, 2011, when the magnitude 9.1 Tohoku Earthquake earthquake struck off the northeast coast of Honshu on the Japan Trench.  Eight days later, a full moon coincided with perigee and immediately suggestions were made that this could have served as the trigger for the massive Japanese quake. One of the first to make this claim was Nolle himself, who claimed that supermoons can cause “geophysical stress.”

And suddenly, the term “supermoon” gained traction among the mainstream media.

Of course, the very idea that the closeness of a full moon could have triggered the Japan earthquake in 2011 is absurd (in fact, on the day of the quake, the moon was actually nearer to its apogee point — that part of its orbit farthest from Earth). And yet, a connection between earthquakes and the moon has been kicked around for a very long time.

On Feb. 9, 1971, the San Fernando Earthquake (magnitude 6.6) rocked parts of Southern California; later that night the full moon underwent a total eclipse. Questions were quickly raised as to whether the eclipse may have been the catalyst for the California quake.

Again, the answer was a resounding no!

Even The Old Farmer’s Almanac (opens in new tab) suggests every year that earthquakes can be anticipated based on how far north or south the moon appears relative to the celestial equator (when it “rides high” or “rides low”). But if there was even a small correlation, wouldn’t seismologists who have spent their careers studying the cause and effect of earthquakes be issuing advisories every time a full moon aligned with perigee, when a total lunar eclipse was due, or when the moon rides high above equator?

Well they don’t, and with good reason: Because there is no proof for any such connections.

What is always rather amazing to me is the way people get whipped into a frenzy when they hear about the announcement of an impending supermoon. The two things that are always disclosed is that this particular full moon “will appear 14% larger and 30% brighter than normal.”

The sensationalism attached to such claims usually results in considerable disappointment among the masses who are looking up and hoping to see something unusual in the sky.

How bright are supermoons?

For instance, a boost of 30% in the moon’s illuminance (opens in new tab) (a measure of the amount of light per unit of area) amounts to an increase in brightness of only 0.28-magnitude. About a decade ago, a friend of mine told me that she was expecting a much-ballyhooed supermoon to appear “radically brighter.” Because of that oft-quoted 30% brighter value, she was expecting to see something akin to a 3-way light bulb; as if on supermoon night it was going to be like turning the moon’s brightness up a notch.

But so far as full moons are concerned, an increase of 0.28-magnitude is hardly perceptible to the eye, if at all.

And what about the moon appearing 14% larger? While Wednesday’s moon will indeed be the “biggest full moon of 2022,” the variation of the moon’s distance is not readily apparent to most observers viewing the moon directly. Unless you catch it when it’s either rising or setting — and appearing briefly larger than normal because of the famous “moon illusion” — Wednesday night’s moon will look pretty much like any other moon.

But thanks to the power of suggestion, more than a few people will insist that the moon appears unusually large to them. In fact, we might even draw a parallel to the 1837 folktale “The Emperor’s New Clothes,” in that to most people a supermoon hardly looks any different from most any other full moon, and yet there is an unwillingness to accept that fact. Rather than go against popular opinion, they instead insist that they are witnessing something most unusual.

In addition to the influence of these preconceptions, the near coincidence of this week’s full moon with perigee will result in a dramatically large range of high and low ocean tides. Any coastal storm at sea around this time will almost certainly aggravate coastal flooding problems.

Such an extreme tide is known as a perigean spring tide, the word ‘spring’ in this case being derived from the German springen, meaning to “spring up,” and not at all a reference to the spring season. Every month spring tides occur when the moon is full and new. At these times the moon and sun form a line with the Earth, so their tidal effects add together. (The sun exerts a little less than half the tidal force of the moon.)

A plane flies in front of the full moon on July 31, 2015. (Image credit: NASA/Joel Kowsky)Too much of a good thing?

Because a full moon qualifies as a supermoon if its distance from Earth is equal or greater than 90% of its distance from apogee to perigee, it turns out that there can be more than one supermoon in each year.  Retired NASA astronomer Dr. Fred Espenak has created a website which provides listings of all full supermoons from the years 2000 through 2100. (opens in new tab)

In some years there are three supermoons, while other years have four (such as this year) and, in a few cases, (as in the years 2029 through 2033) there can be as many as five!

While seemingly there is always excitement regarding the announcement of an impending supermoon, if there are so many occurring in a single year, there may come a point in the future where the general public might become blasé so far as supermoons are concerned.

For instance, if clouds block your view of the moon on Wednesday night, don’t fret. There’ll be another supermoon on the way next month on Aug. 11.

Perhaps we should only concern ourselves only with those full moons that occur closest to perigee — thereby reducing the number to just one per year.

Or, perhaps only brand a full moon as “super” when it comes to within 221,705 miles (356,800 km) of Earth. That would make supermoons less frequent, occurring on an average of once about every 4 years. By this criterion, if such a rule were in place, there would be no supermoon in 2022.  The most recent would have occurred in the year 2018 and the next not until 2026.

And if we really want to adhere to the moniker of “super,” we might apply this term only to those full moons that approach Earth to within 221,519 miles (356,500 km). Espenak regards these as “Ultimate Full Moon Perigees.” Only four such cases will occur in the 21st century, with the first of these not coming our way until Nov. 25, 2034.

Dr. Espenak adds: “On the plus side, any publicity (like a supermoon) that gets people to look up at the night sky is a good thing.”