Elden Ring is filled with NPC questlines, some of which are more important than others. While each is interesting in its own ways, a select few, like Brother Corhyn and Goldmask’s, are essential if you want to unlock all of the endings Elden Ring has to offer.

Brother Corhyn is one of the many Tarnished NPCs that can be found at Roundtable Hold in the game’s opening hours. A priestly figure, he will teach players incantations. To begin his questline, you’ll need to have journeyed to the Academy of Raya Lucaria and beat Rennala, Queen of the Full Moon. Return to Roundtable Hold after doing so and talk to Brother Corhyn, who will then remark he will be leaving the hold and setting out on a journey to find the noble Goldmask. Your quest begins here. 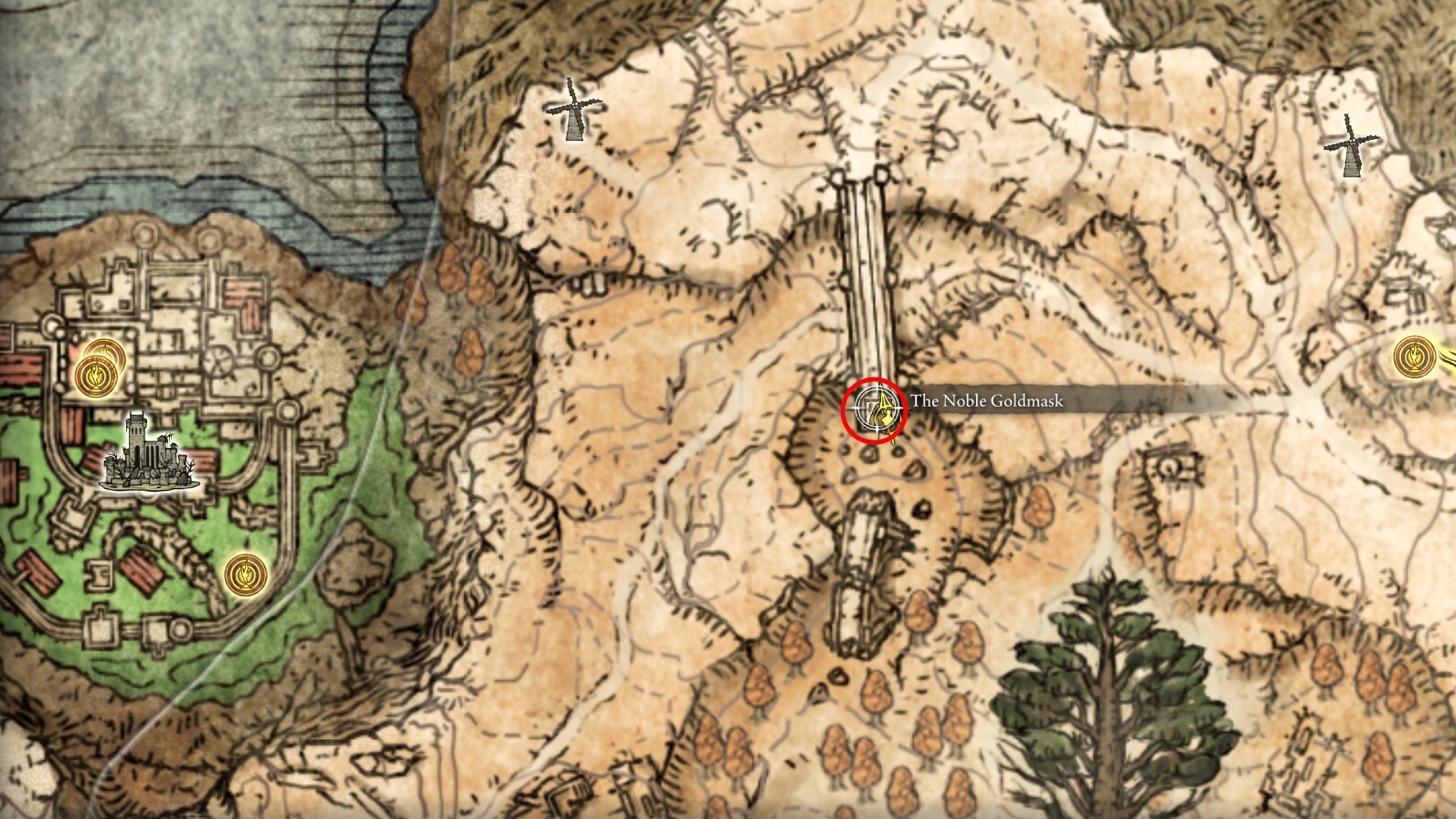 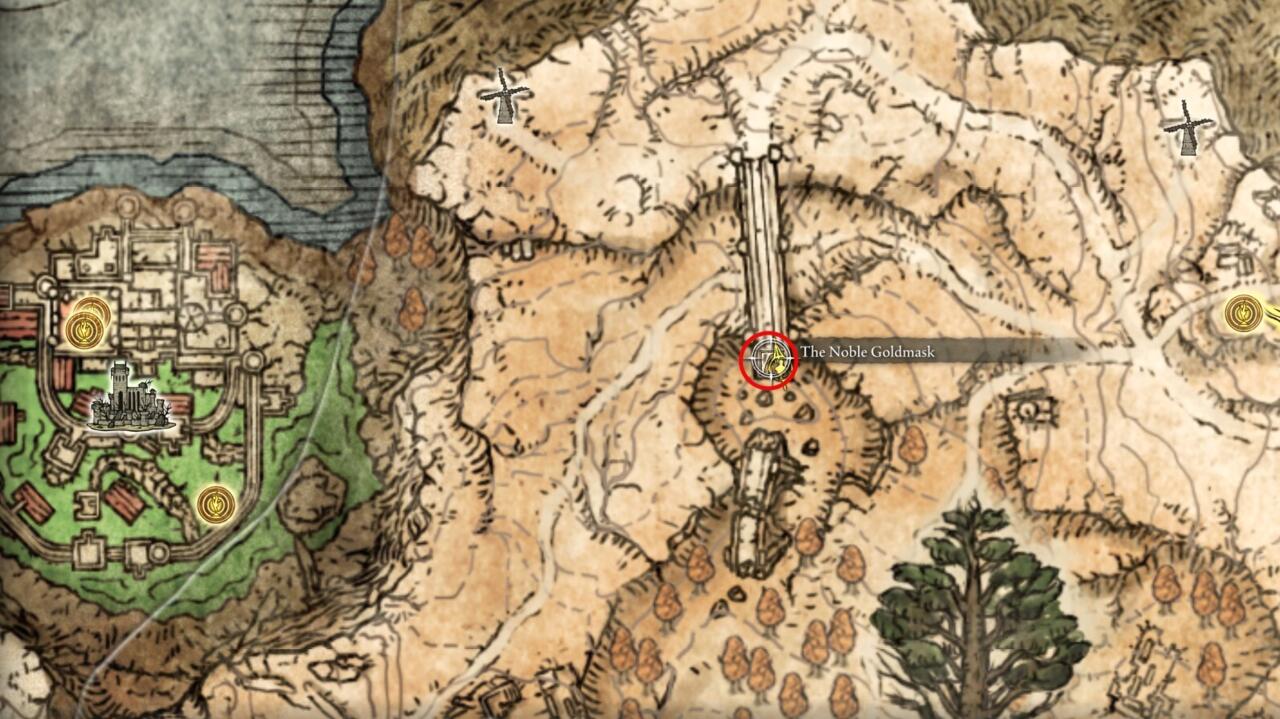 Brother Corhyn can be found near the map location for Altus Plateau after leaving Roundtable Hold. He will remark he is still looking for Goldmask, who he supposes will be closer to the Erdtree. To find Goldmask and continue the quest, go north to discover a destroyed bridge you’ll need to climb atop of. The bridge is located north of the Bower of Bounty Site of Grace. To reach the top, you can either take the nearby Spiritspring to directly jump to Goldmask’s location or take a teleporter gate on the southern section of the broken bridge (located southwest of the Minor Erdtree in the area). 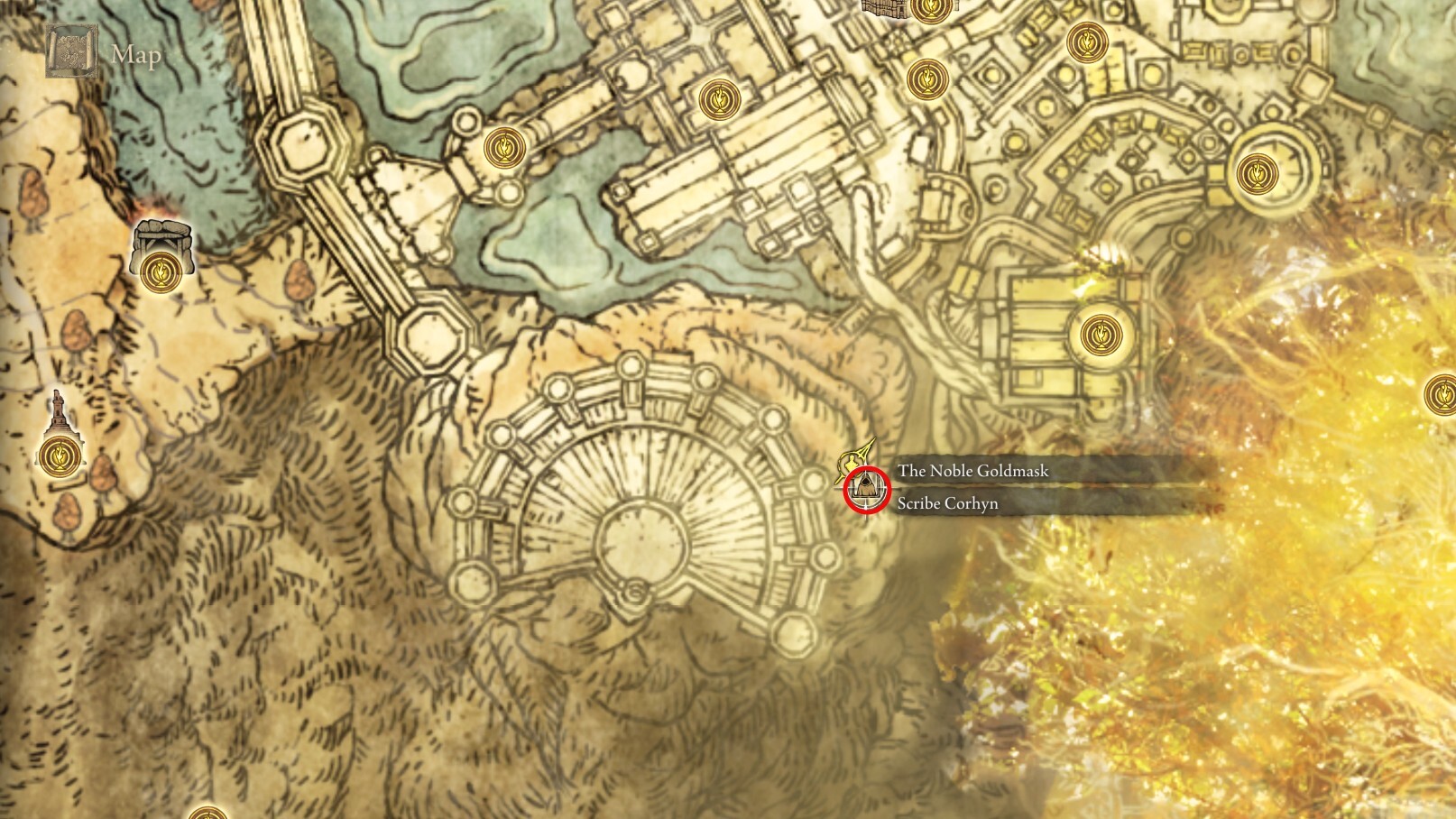 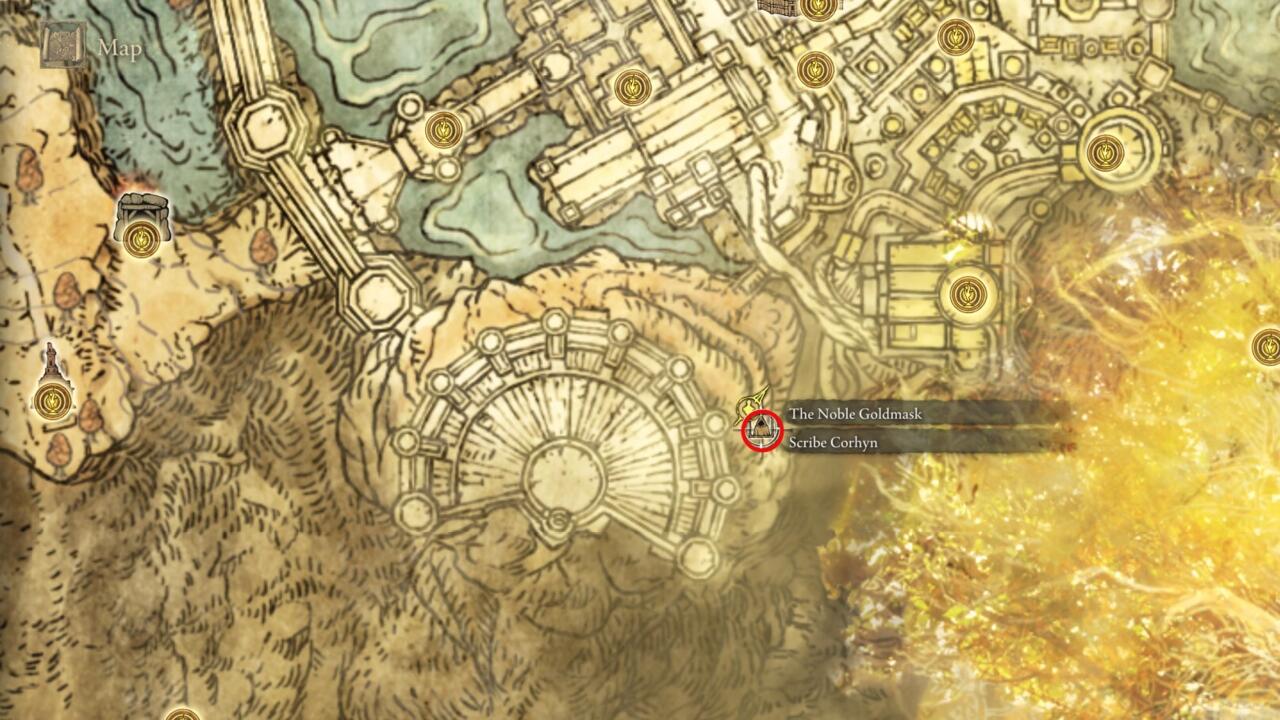 After talking on the bridge, Brother Corhyn and Goldmask can next be near a cliff looking at the Erdtree near the Colosseum in Leyndell, the Royal Capital. You’ll need to have acquired two Great Runes from some of the game’s main bosses in order to access this area. The Colosseum is to the far south of the Leyndell area (it’s the big, circular building on the map). The easiest way to get to the Colosseum is by heading south from the West Capital Rampart Site of Grace, jumping onto the tree root and then falling onto the path that leads up the hill to the Colosseum.

You’ll have to battle some gladiators along the way. After finding and exhausting all dialogue options with Brother Corhyn about Goldmask, you’ll need to solve a riddle. To do this, you’ll first need to find the Golden Order Principia, a prayerbook that will allow you to learn the Law of Regression incantation from characters like Brother Corhyn.

Finding the Golden Order Principia, however, is a little tricky. From the Erdtree Sanctuary Site of Grace, head outside to the balcony filled with dead Finger Maidens and turn left, up a tree root and onto the second floor of the sanctuary. Instead of continuing forward to the Queen’s Bedchamber Site of Grace, instead turn left just as you exit the door and jump onto the roof of the sanctuary. From there, climb through a window, go right to circle around the sanctuary, and walk across another tree root to find the item on a corpse in a chair hanging from the ceiling. 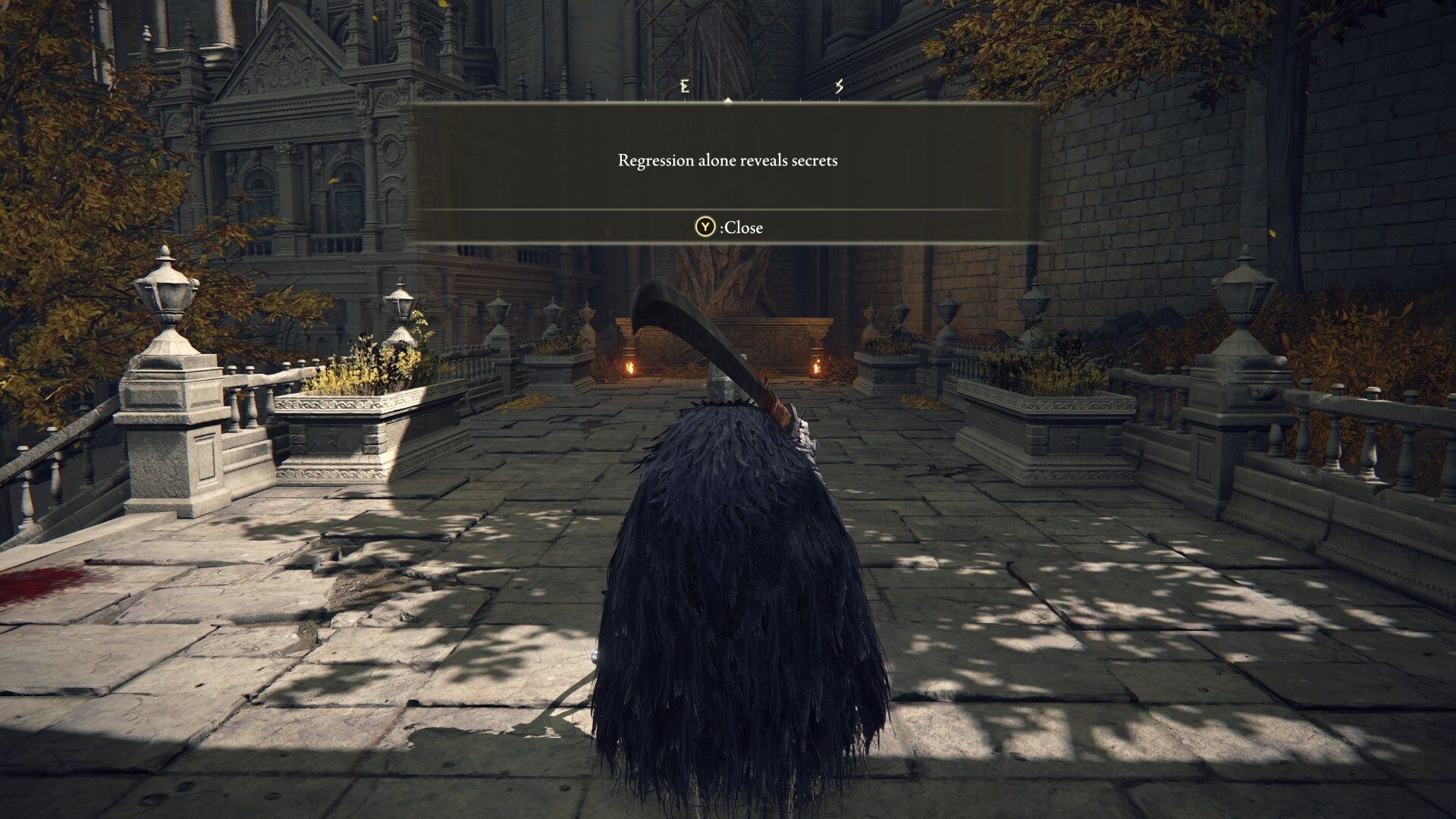 This statue and message is found by taking the elevator near the Erdtree Sanctuary Site of Grace.

You’ll now need to take the book back to Brother Corhyn then purchase the Law of Regression incantation for 10,000 runes. The trick is you’ll need 37 intelligence to use the incantation in front of the statue and complete the riddle, which, depending on what kind of character you are playing, is a big ask. To hit this requirement, you can either spend two Larval Tears at Rennala to respec your character, perform the riddle, and then respec back, or you can find and equip as many intelligence boosting items as possible to hit the threshold.

Once again departing from the Erdree Sanctuary Site of Grace, this time head the opposite direction from earlier and down an elevator and a set of stairs. At the bottom of the stairs in front of you will be a statue with two braziers on either side, as well as a message that reads “Regression alone reveals secrets.” Use the Law of Regression, interact with the new message that appears after doing so, and then return to Brother Corhyn and exhaust all dialogue options.

Leyndell, Capital Of Ash, And Acquiring The Mending Rune Of Perfect Order

Brother Corhyn and Goldmask will travel to the Mountaintop of the Giants region following their adventure in Leyndell. To find them and continue on with the quest, travel to the bridge southeast of the area’s Stargazer Ruins. Talk to them until all dialogue options are complete, and you are nearly done with the quest. To unlock the final stage of the quest, you’ll need to have progressed to the final parts of Elden Ring by completing the Crumbling Farum Azula area and unlocking Leyndell, Capital of Ash. Once you’ve done that, you can return to Leyndell’s Colosseum to find Goldmask’s corpse and the Mending Rune of Perfect Order, an item that can be used to enact Elden Ring’s Age of Order ending.