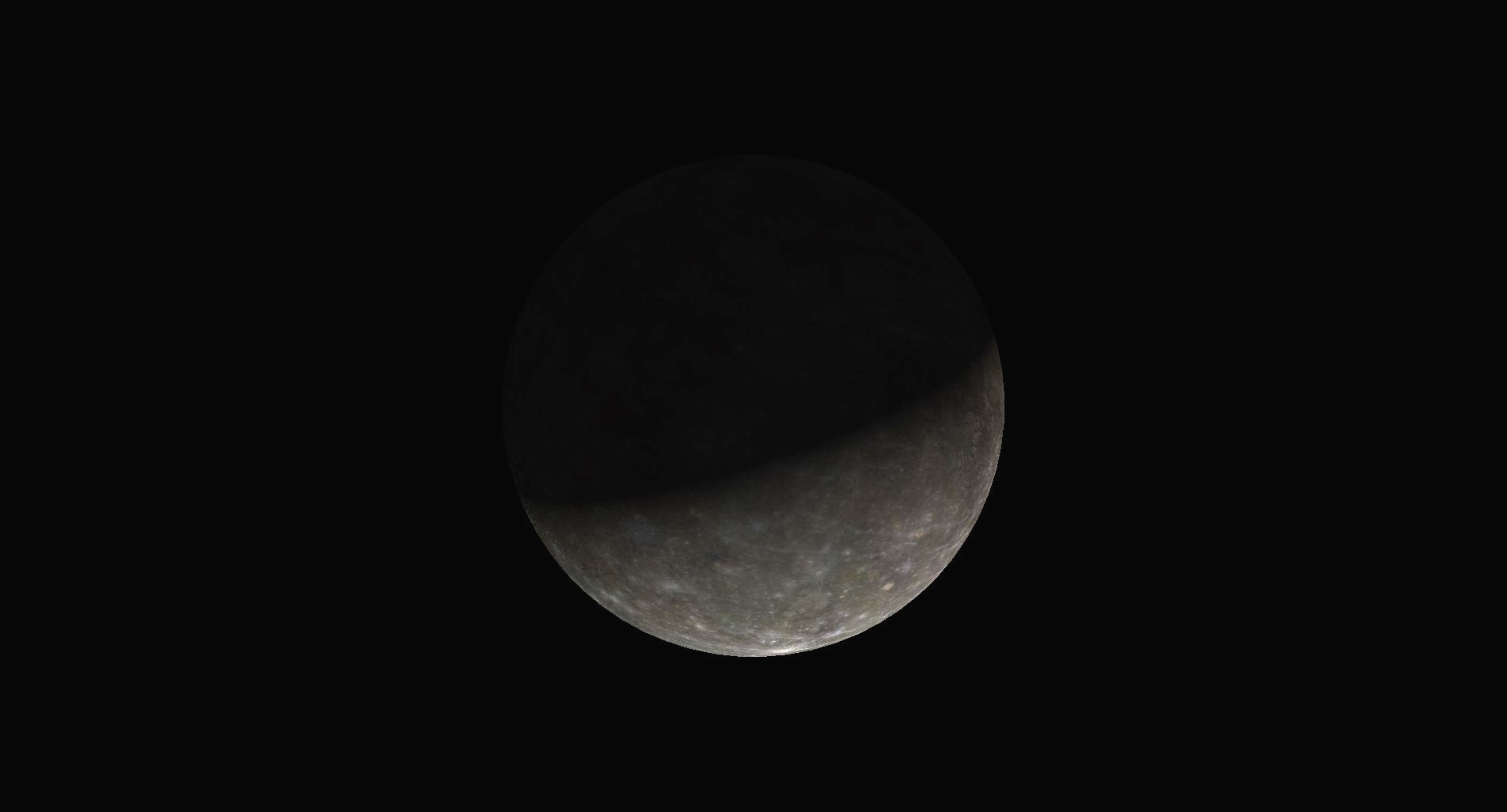 When the month of April began, our evening sky was completely devoid of any bright planets; that was pretty much the story for the first half of this month. But that will change as we now crossover into the second half of April.

Ironically, that one evening planet that will be readily visible shortly after sunset has often been cited as the most difficult of the five brightest naked-eye planets to see: Mercury.

It’s also called an “inferior planet” because its orbit is nearer to the sun than the Earth’s orbit. Therefore, Mercury always appears, from our vantage point, to be in the same general direction as the sun. Since it’s also the planet closest to the sun, Mercury never strays too far from the sun’s vicinity in our night sky. You might even use the analogy that Mercury stays close to the sun like a child clinging to its mother’s apron strings.

It is for that reason that relatively few people have set eyes on it; there is even a rumor that one of the greatest of all astronomers, Copernicus, never saw it from his homeland in Poland. While that is certainly true most times of the year, there are other intervals — and we’re about to enter one of them — where making a sighting of Mercury requires almost no effort. You simply must know when and where to look, and find a clear, unobstructed west-northwest horizon.

This sky map from Starry Night Software shows the location of Mercury in the west northwestern sky about 40 minutes after sunset in New York City on April 16, 2022. It is low on the horizon, so you will need an unobstructed view to see it.  (Image credit: Starry Night Software)

On April 2, Mercury was at superior conjunction. That is, it was on the far side of the sun as seen from Earth, so it was hidden from our view by the dazzling solar glare. But there are two events that conspire to cause this rocky little world to rapidly vault into view for the rest of this month.

First, on April 9, Mercury arrived at its ascending node — that point where it appeared to cross the Earth’s orbital plane in the sky (called the ecliptic) and moved northward. This provides observers in the Northern Hemisphere with an advantage, for it allows Mercury to appear to climb higher into the evening twilight sky.

Then, on April 13, Mercury arrived at perihelion, its closest point to the sun. It is in this part of its orbit that Mercury moves fastest and it will certainly demonstrate this during mid and late April by rapidly pulling away from the sun’s vicinity.

As of April 16, it will be visible about 40 minutes after sunset, very near to the west-northwest horizon. Yet, if your sky is clear and there are no tall obstructions to your view (like trees or buildings) you should have no trouble in seeing it as a very bright “star” shining with just a trace of a yellowish-orange tinge. On that Saturday evening, Mercury will be shining at magnitude –1.1, which means that it will rank as the second brightest object in the early evening sky, surpassed only by Sirius (the brightest of all stars).

The Pleiades and the moon join in

The Pleiades star cluster will join Mercury in the night sky on April 29. This chart from Starry Night shows the view at about 8:30 pm local time looking in the west. (Image credit: Starry Night Software)

Over the next couple of weeks, Mercury will slowly ebb in brightness, but it will also slowly gain altitude as it gradually moves away from the vicinity of the sun.

The planet  reaches greatest eastern elongation — its greatest angular distance east of the sun (21 degrees) on April 29. Shining then at magnitude +0.4 (just a trifle dimmer than the star Procyon in Canis Minor), it will set about one hour and 50 minutes after the sun, making this Mercury’s best evening apparition of 2022. Your best view will likely come 50 minutes after sunset; Mercury will sit 10 degrees above the west-northwest horizon. Your clenched fist held at arm’s length measures roughly 10 degrees in width. If you place the bottom of your fist on the horizon, the top part will be about 10 degrees. So, Mercury will be about “one fist” up above the horizon.

And if you use binoculars, there will be a bonus awaiting you, in that you’ll also be able to see the beautiful Pleiades star cluster hovering a mere 1.4 degrees to the upper right of this planet.

Come May 2, another celestial body will arrive on the scene: the moon. Having passed new phase two days earlier, the moon will appear as a slender sliver of light, only 4% illuminated by the sun. The moon will be situated 4 degrees to the upper left of Mercury. Meanwhile, the Pleiades will be positioned just 2.5 degrees to Mercury’s lower right. You should be able to fit all three in the field of view of standard 7-power binoculars; set against the fading glow of evening twilight this should make for a lovely celestial tableau.

Mercury, like Venus, appears to go through phases like the moon. On April 16 in telescopes, Mercury is a gibbous disk more than three-quarters (79%) illuminated, which is why it appears so bright. But by April 25, it will appear slightly less than half-illuminated, and the amount of its surface illuminated by the sun will continue to decrease in the days that follow: 28% on May 2, 23% on May 4, and only 18% by May 6.

Consequently, when Mercury begins to turn back toward the sun’s vicinity after April 29, it will fade at a rather rapid pace.

In fact, by May 2, Mercury’s brightness will have dropped to magnitude +0.8, only one-sixth as bright as it was on April 16 though still slightly brighter than the orange star Aldebaran in the constellation Taurus the Bull, which on that evening will be located 11 degrees to the left of Mercury. By May 6 it will have dropped to magnitude +1.6 and telescopes will show it as a narrow crescent. This, in all likelihood will be your last view of it, for during the following evenings the combination of its lowering altitude, plus its descent into the brighter sunset glow will finally render Mercury invisible.

Mercury: A hot and cold planet

In old Roman legends, Mercury was the swift-footed messenger of the gods. The planet is well named for it is the closest planet to the sun and the swiftest of the sun’s family, averaging 29.4 miles (47.4 km) per second; making its yearly journey in only 87.96 Earth days.

Interestingly, the time it takes Mercury to rotate once on its axis is 58.6 days, so that all parts of its surface experiences periods of intense heat and extreme cold. Although its mean distance from the sun is only 35.98 million miles (57.9 million km), Mercury experiences by far the greatest range of temperatures: 800 degrees Fahrenheit (427 degrees Celsius) on its day side; minus 315 degrees F (minus 193 degrees C) on its night side.

The dual identities of Mercury

In the pre-Christian era, this planet actually had two names, as it was not realized it could alternately appear on one side of the sun and then the other.

Mercury was called Hermes when in the evening sky, but was known as Apollo when it appeared in the morning.  It is said that Pythagoras, about the fifth century B.C., solved the mystery when he pointed out that they were both one and the same.

Editor’s note: If you capture a stunning photo of Mercury or any other night sky sight and would like to share it with Space.com for a story or gallery, let us know! You can send images and comments to [email protected].

Joe Rao serves as an instructor and guest lecturer at New York’s Hayden Planetarium. He writes about astronomy for Natural History magazine, the Farmers’ Almanac and other publications. Follow us on Twitter @Spacedotcom and on Facebook.

« The Lord of the Rings: Rise to War Developer Interview » Reality splinters in new featurette for Marvel’s ‘Doctor Strange in the Multiverse of Madness’ (video)