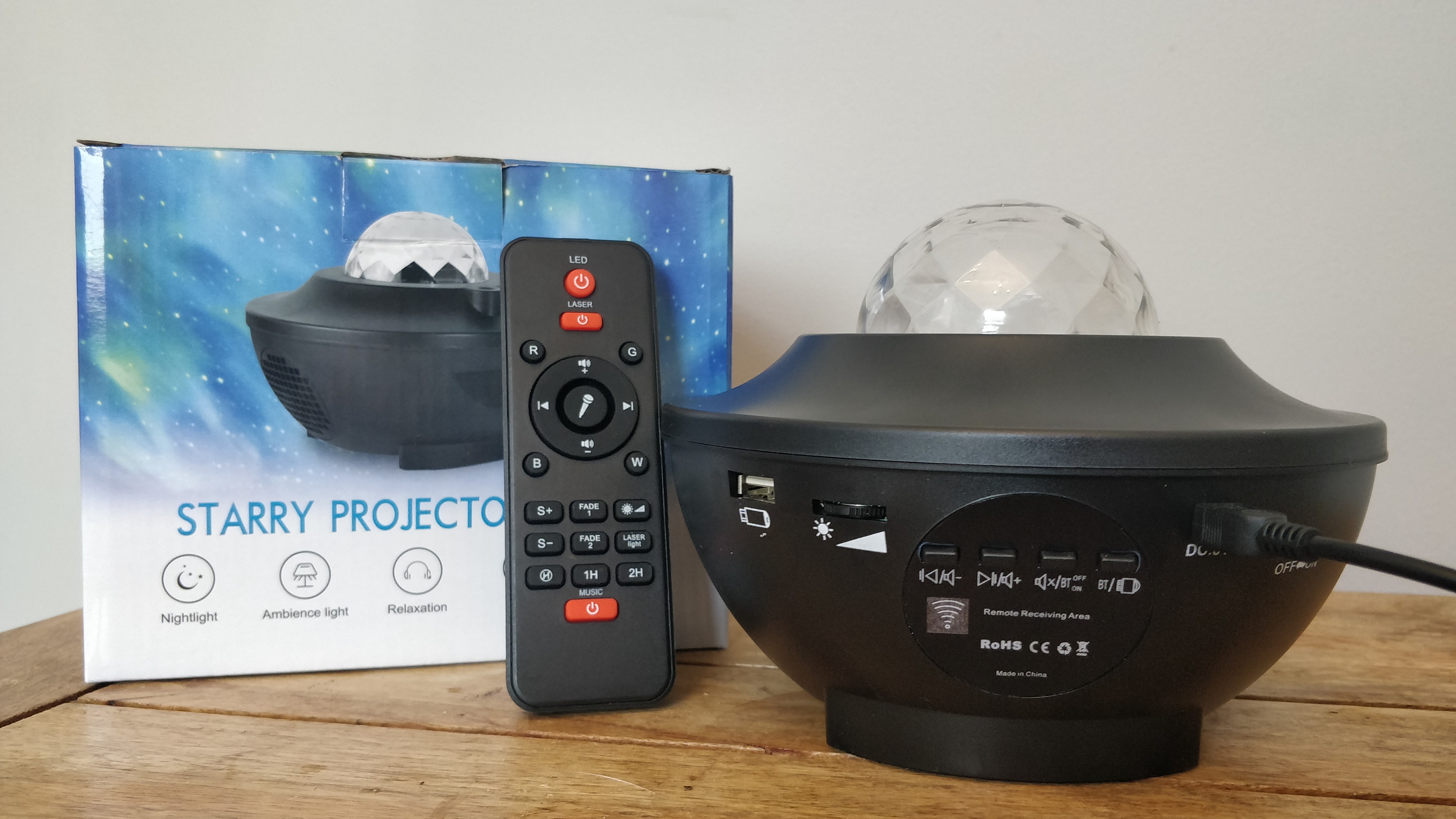 Unlike other star projectors we’ve reviewed, it is pretty hard to find out any information about Encalife itself. As we understand it, Encalife sources and sells products that are designed to enhance the ambience of a room rather than being a company that designs and gets its own products manufactured.

Here we’re reviewing the ‘Ambience’ model. The key differentiating feature of this, compared with other models we’ve looked at, is that it is a 2-in-1 projector and Bluetooth speaker. It comes with a remote control but some functions can be operated using the control panel on the side of the unit.

The Encalife Ambience Galaxy and Star Projector is in our roundup of the best star projectors and competes with the like of the Sega Homestar Flux and BlissLights Sky Lite 2.0, which we’ve also reviewed.

While star projectors are a great way to absorb yourself in the beauty of the night sky at home, chances are you’ll want to explore the real thing, too. So be sure to see our guides for the best telescopes and best binoculars to enhance your experience. If photography is more your thing, take a look at our best cameras for photos and videos, and the best lenses for astrophotography.

If we hadn’t been expecting this product in the post, we wouldn’t have known which company it had come from. The packaging doesn’t feature any company branding or logo, and it doesn’t say anything about Bluetooth connection or the fact it’s a music speaker. It simply reads ‘Starry projector light’. The user manual reads ‘Music Starry Projector’ and the text within reads like a poor translation.

Although branding isn’t everything, the lack of clarity and continuity in both design and messaging instantly leads us to question the product’s integrity and quality before we’ve ever laid our hands on it. This is a shame as we were pleasantly surprised by the quality of the product itself.

The shape is akin to the top of a stereotypical UFO. Unlike other projectors like the Sky Lite 2.0 or the Homestar Flux which have quite a direct light projection, this one has a faceted dome over the LED to help disperse the light over 180 degrees. This makes it nice and easy to get into position and easily fills the whole ceiling with lights, though some might find the bright light emitted from the dome itself distracting.

There is a speaker on each side of the device which is great for listening from any angle. There’s a control panel on one side, though we feel this could be simplified to make it more user-friendly for children.

The Bluetooth speaker, which can be used with or without the lights and laser is very simple to pair. The device permissions request access to call history and contacts which seems a little odd, but this can be turned off once paired. You can adjust the volume, or navigate backward and forwards between songs using the same remote as you control the lights with. The only slight niggle is that you can’t pause/start music using the remote or the control panel. To be honest, we had expected the speaker to be of poorer and tinnier quality than it is. It’s never going to win any awards for its sound performance and as with many cheaper Bluetooth speakers, it lacks bass. But for background music, or listening to a podcast or audiobook it is more than adequate.

You can customize the configuration of lights choosing between red, green, blue and white. It’s also possible to adjust the brightness between low, medium and high. The colors are vivid and the lights are bright. The LED light and laser can be operated independently or turned off completely leaving you with just the Bluetooth Speaker.

The Encalife Ambience Galaxy & Star Projector with in-built speaker has a faceted dome on top to spread the lights out across the ceiling (Image credit: Tantse Walter)

You can choose whether to display static colors or change how quickly the patterns of color move to suit the mood. On unboxing and trying the device for the first time, we thought it would be good if the lights moved in time with the music and on pressing the microphone button on the remote, we were pleased to find out it does exactly that. The music can be played from anywhere for this to work, not just through the device meaning it’s great for parties.

A power adaptor isn’t included with this projector, however, if you’re anything like us, there are plenty lying around the house. It can also be powered using any USB output — we currently have it plugged into a laptop. 2 x AAA batteries (not supplied) are required for the remote and some functionality isn’t possible without using it.

There is also a USB port for plugging in a flash drive. We haven’t been able to test this, as we’re sure, like most people, these are now quite outdated for playing music from and we didn’t have one loaded with music to hand. It would be useful if you had a pre-loaded playlist for a specific event where a reliable internet connection isn’t possible, or where a routine of songs is required (e.g a sleep playlist).

The supplied remote is needed to change some settings, without the remote, you’re unable to change the configuration or speed of colors, use preset modes, or set the sleep timer.

The lights and lasers themselves shine bright and vivid. Whilst there aren’t as many color combinations as other projector lights on the market, the combinations and patterns caused by the dome do help create a whimsical and peaceful environment or a colorful party atmosphere.

Should I buy the Encalife Ambience Galaxy & Star Projector?

This device does do what it says in the marketing. It creates a nice ambience wherever you want it. Much like the Sky Lite 2.0, this device isn’t at all scientifically accurate or realistic in terms of being a ‘star projector’. For this, you’d need the Homestar Flux. Instead, it is a mood setter or an alternative to a night light for kids who are scared of the dark which displays galaxy/nebula-esque patterns on the ceiling. The speaker is a nice bonus, plus the sound is actually pretty good. Encalife offer a 30-day money-back guarantee in case you change your mind but if you’re looking for a warranty, you’ll have to pay £12 for it.

« New Justice League Game Announced, Aimed At Younger Audience » Beyond angry protesters and inked arms, there’s this First Nations story of the Southern Cross — one of unity and belonging