Far Cry 6 is shaping up to be a return to the franchise’s exotic, tropical roots while also embracing the over-the-top nature of recent sequels. New footage shown during Ubisoft’s livestream focused on the cast of rebels you’ll partner with to liberate the island of Yara, along with the inventive weapons–like the minigun made from motorcycle parts–that you’ll get to use while fighting for the liberation of the secluded country.

Before the livestream, we got to check out an extended presentation showcasing the different aspects of Far Cry 6‘s open world and its action-oriented gameplay. Along with that, we also heard from developers at Ubisoft as they explained how they made a more vocal and present Far Cry protagonist, and how improvised weaponry offers the most diverse arsenal of tools that the franchise has seen yet.

Like most recent Far Cry games, at the center of its high-octane adventure across vast landscapes is the main villain. In Far Cry 6, Presidente Anton Castillo–played by Breaking Bad’s Giancarlo Esposito–has taken control of the isolated island country of Yara with the aim to bring the nation into a new golden age by any means necessary. While Far Cry 5 and its epilogue, New Dawn, featured custom characters that let their actions speak for them, the next game will see the return of a voiced protagonist. Far Cry 6 focuses on Dani Rojas, who can be either a male or female character. While most Far Cry games follow the “fish-out-of-water” conceit, Dani is a native of Yara, adding further stakes in their attempt to overthrow Castillo’s regime. The protagonist will also be present in the game’s cutscenes (a first since the original Far Cry), which will show off their personality and different outfits when interacting with other characters.

By and large, Far Cry 6 doesn’t deviate much from the loop and gameplay experience of recent Far Cry games. This loop focuses heavily on exploring your surroundings, engaging in side-missions, retaking outposts, and eliminating key members of Castillo’s military to destabilize their control of the island nation. It’s familiar and still looks to capture those same thrilling moments of open-world hijinks that you would expect from the series. However, Far Cry 6 presents a bit more flexibility with how you go about facing off against Castillo’s regime.

One of the more significant innovations in Far Cry 6 is the new weapon types, which now include three special categories of firearms and gear. The first type is the Regular variety, which includes standard pistols, assault rifles, and shotguns–a mix of recycled equipment passed down from the Cold War era along with modern weapons stolen from Castillo’s army. The second type is known as the Resolver: jury-rigged weapons made up of junk items and scrap. Along with the minigun mentioned earlier, there’s also a flamethrower and a disc launcher that fires burned CD copies of the ’90s hit song “Macarena,” which plays whenever you charge the weapon and fire it. The final weapon type is Supremos, specialized augmented backpacks that can unleash super moves–such as a back-mounted mortar launcher or rocket-powered jetpack. 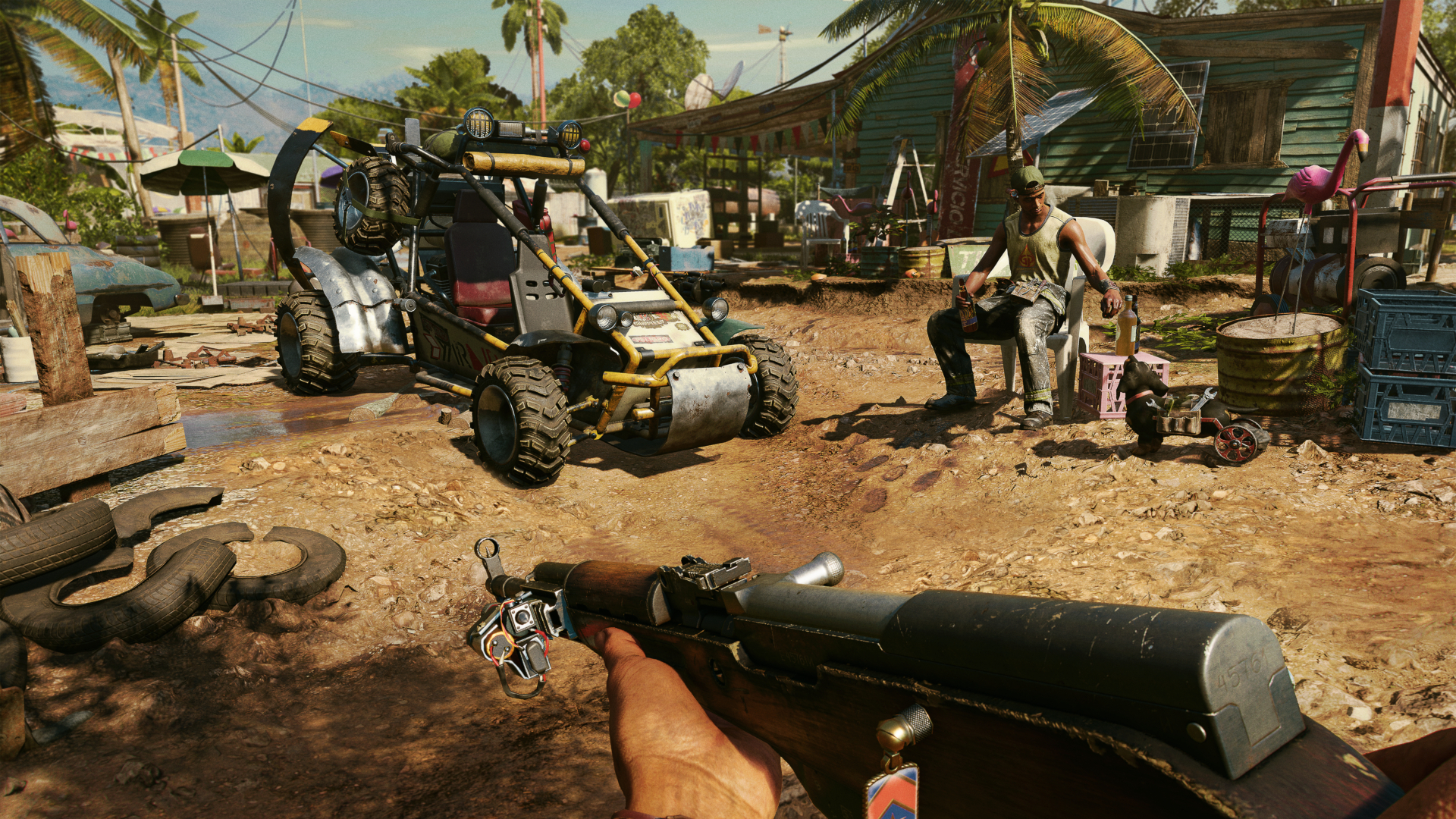 Furthermore, all of these weapons across three categories are customizable, letting you turn a simple handgun into a machine pistol with a drum magazine. According to the developers, player and loadout customization has a deeper role in this game than in earlier entries. Along with the weapon augments, you can also customize your repurposed classic muscle or town cars with different decals and guns, and even deck out Dani with varying options of clothing that offer bonus perks, such as increased stealth and better weapons handling. It’s an unusual approach for a Far Cry game, which has been primarily focused on what sort of weapons you were carrying until now. Still, it adds an interesting twist that presents more variety and a greater sense of fun in the combat engagements.

Stealth is much more viable, as well. You can even holster your gun to hide in plain sight and bribe roaming guards to avoid engagements. In some regard, it does lean a bit further into becoming an RPG, putting it in line with New Dawn. However, lead game designer David Grivel tempered those expectations and stated that the expanded customization gives a stronger feeling of choice in exploring the island and coming up with your own solutions.

“So Far Cry has always mixed genres; there are bits of RPG-like elements and survival gameplay,” said Grivel. “While that is a standard throughout, it’s also a shooter first. In New Dawn, you would craft a weapon, but you cannot customize them once they are done, so this time around, you can not only acquire new weapons, but you can also craft and upgrade them as you go. We really ran with the do-it-yourself approach, which is a constant in the story and themes of the game. Some of the things that you will attach to your weapon, some scope, some silencers, they will look handmade because that’s the whole point of being a rebel, right? You have to make do with what you have. You can really customize the way you want. That’s the keyword for us: customize. We really tried to embrace that philosophy across the board.” 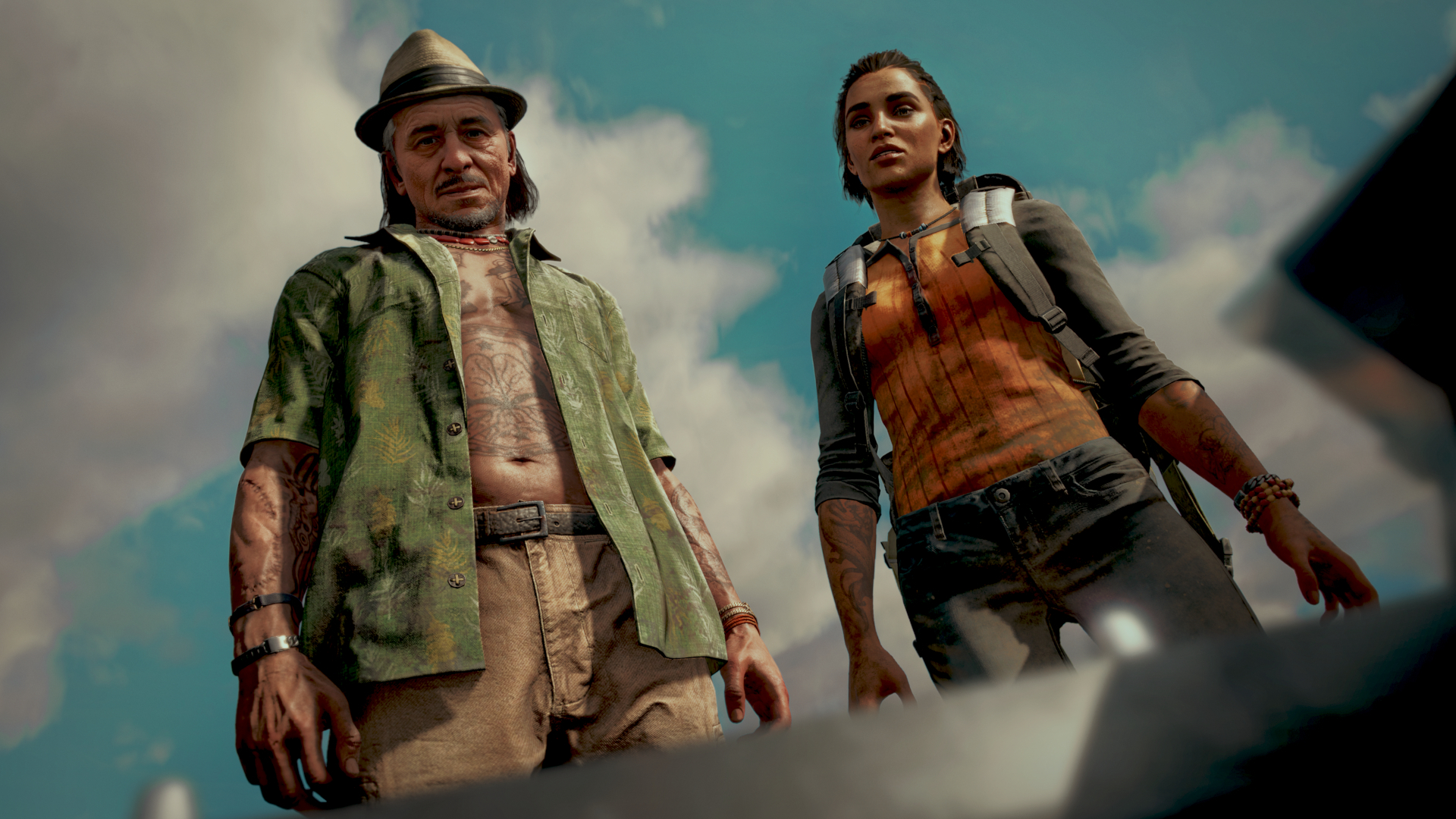 As mentioned before, Dani Rojas is more present in the main story than previous Far Cry protagonists. Instead of just being a hired gun who silently takes on assigned jobs, we get a clearer sense of Dani’s personality and motivation for taking part in the conflict. In some of the story scenes we saw during our presentation, Dani will interact and bond with different rebel army members as they take on bolder missions to cripple Castillo’s army. One character in particular we saw was Clara Garcia, who is among the guerrilla army’s most efficient leaders. These scenes show some interesting character moments and fill in many details on what life is like in Yara and how the culture has evolved following decades of isolation. Unfortunately, the devs couldn’t elaborate on if you will be able to make choices in how you interact with these characters in the main story, but I’m excited to see more of what’s in store for these characters and where they fit in on the island.

Like in Far Cry 5, you can also team up with other characters, including rebels and even animals. Known as Amigos, you’ll be able to call in aid to help out with missions or cause chaos in the open world. During the game’s debut last year, we got to see the pet dachshund Chorizo (yes, you can pet them too), who can help sniff out enemies and distract them while you sneak in for the kill. There’s also a pet alligator named Guapo who will chase down enemies and eat them up.

While the plot of Far Cry 6 does deal with some pretty heavy topics related to the occupying army and how that affects the citizens of Yara, the core game itself does keep things pretty light with its over-the-top action and absurd open-world antics. This recent look at the game showcases a lot of the raw thrills you can get, but it still left us with a lot of questions regarding the game’s scope, how the added element of choice and customization will influence the main plot, and even if co-op play will still be available in the game. 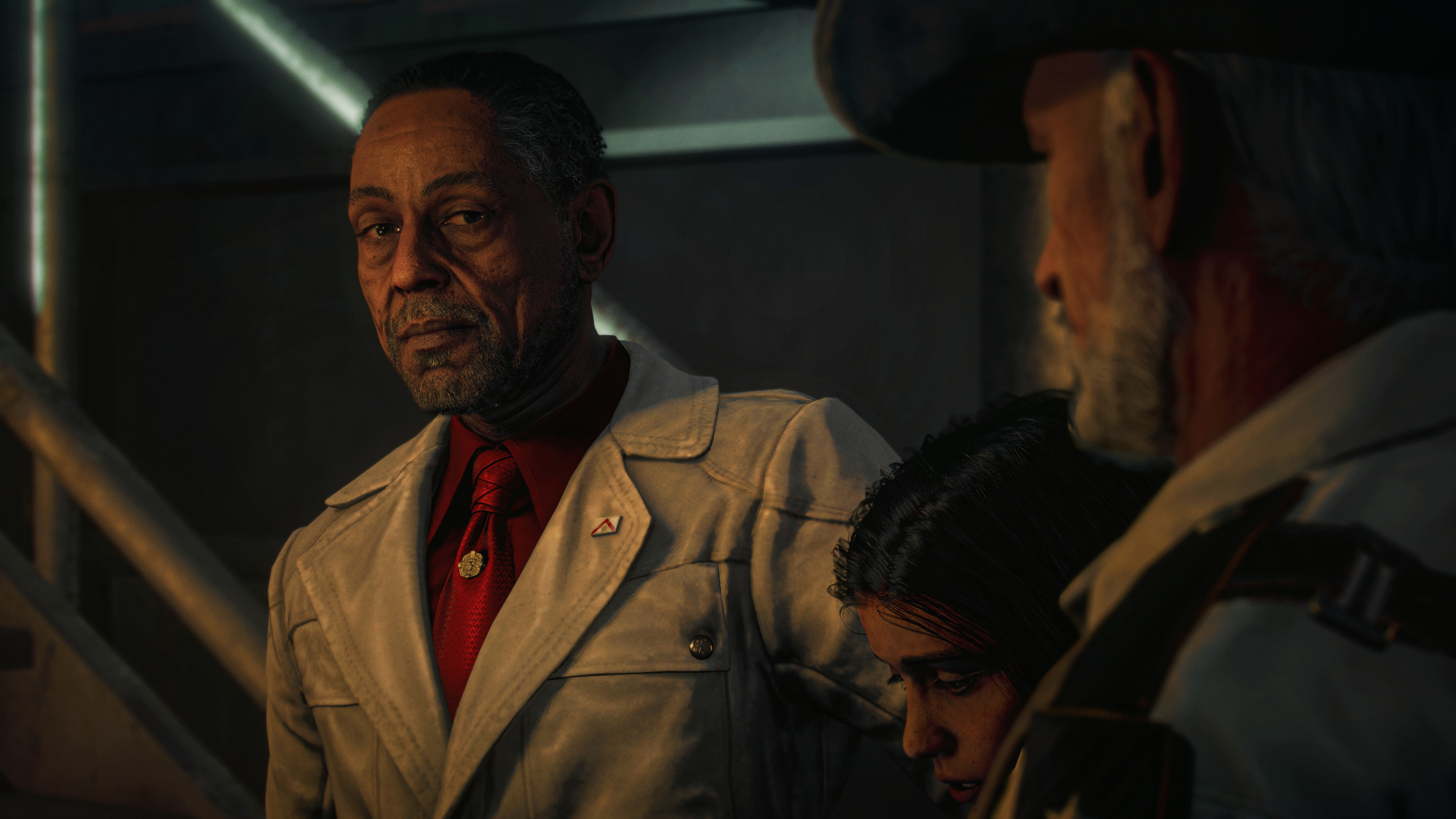 I would have liked to have seen more about Anton Castillo and the sort of activities you can do when exploring the open world, but that will have to wait till a later date. Still, as an admirer of the Far Cry series, Far Cry 6 looks to be shaping up as a solid follow-up that keeps up with the franchise’s fast pace and scope. It may not look to rock the boat or make big sweeping changes for the franchise, but that’s not necessarily a negative. The type of thrills that the Far Cry series offers are usually fun and bombasic and more of that is certainly welcome.

Far Cry 6 is scheduled for release on October 7, 2021, launching on PlayStation 4, PS5, Xbox One, Xbox Series X|S, PC, and Google Stadia. For more on what’s to come with Ubisoft’s slate of games, be sure to check back with GameSpot’s Play For All coverage throughout June.