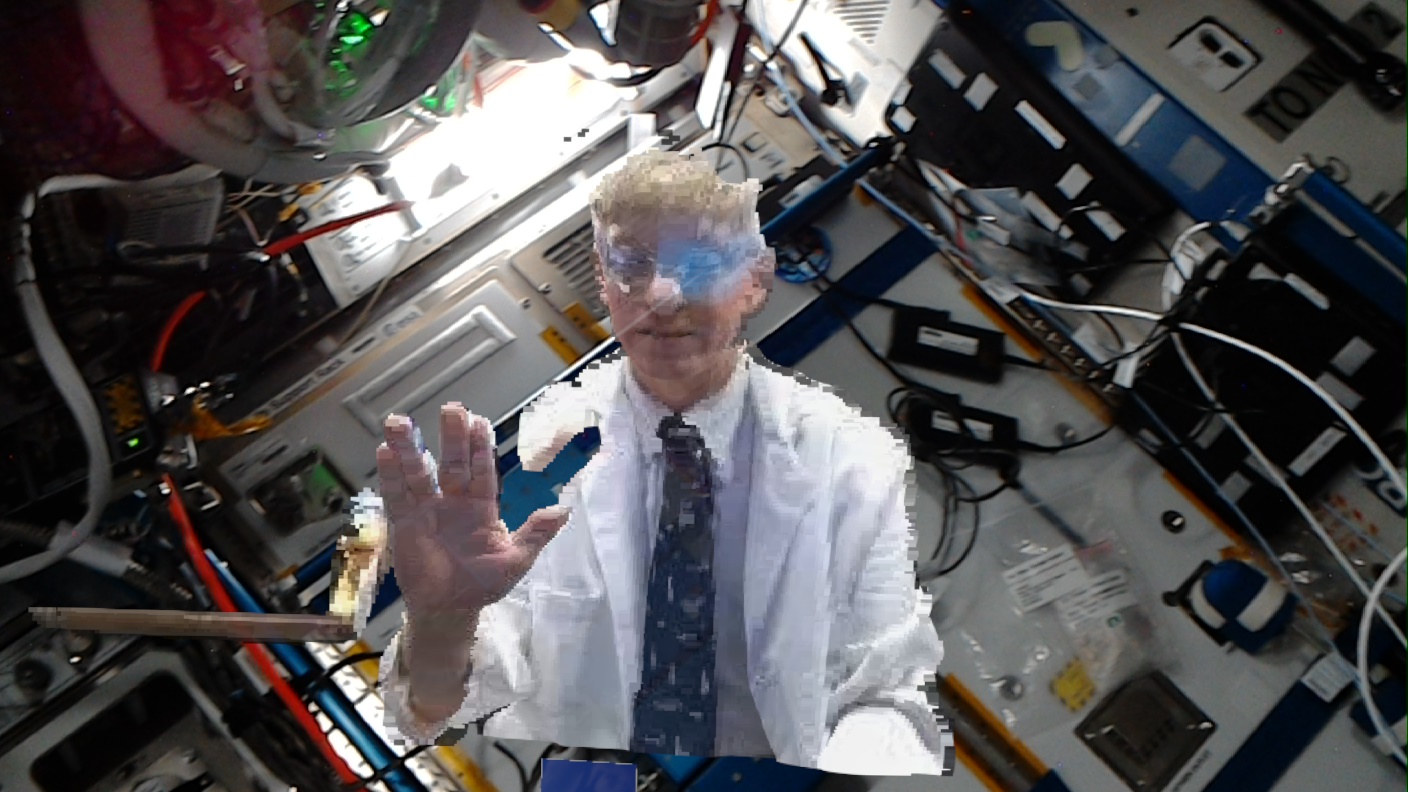 In 2021, a team of hologram doctors was “holoported” to space to visit astronauts living aboard the International Space Station, NASA has revealed in a new post. The hologram teams, led by NASA flight surgeon Dr. Josef Schmid and Fernando De La Peña Llaca, CEO of software provider Aexa Aerospace, were the first humans to ever be “holoported” from Earth to space.

“This is completely new manner of human communication across vast distances,” Schmid said in the statement. “Furthermore, it is a brand-new way of human exploration, where our human entity is able to travel off the planet. Our physical body is not there, but our human entity absolutely is there.”

(In the image above, Schmid can be seen greeting the astronauts in space with a well-known space greeting, the Vulcan salute from “Star Trek.”)

“It doesn’t matter that the space station is traveling 17,500 mph [28,000 kilometers per hour] and in constant motion in orbit 250 miles [400 km] above Earth, the astronaut can come back three minutes or three weeks later and with the system running, we will be there in that spot, live on the space station,” Schmid added.

The medical teams holoported to the station on Oct. 8. Using the Microsoft Hololens Kinect camera and a personal computer with custom Aexa software, European Space Agency astronaut Thomas Pesquet, who was on board the station at that time, had a holo-conversation with Schmid and De La Pena’s teams. The holograms of the doctors were visible live in the middle of the space station.

So how did it work?

The “holoportation” technology that enabled this event works using specialized image capture technology that reconstructs, compresses and transmits live 3D models of people. This technology couples with the HoloLens, a self-described “mixed reality headset” that combines sensors, optics and holographic processing tech to allow the wearer to see the hologram images or even enter a “virtual world.”

With the two systems combined, users in orbit can not only see hologram participants, but can also hear and interact with them. The technology is not new, but has never been used in an environment this challenging with users so far apart.

According to NASA, this “new form of communication” is a precursor for more extensive hologram use on future space missions. Next, the agency plans to try two-way hologram communication, in which they will send a hologram of the astronauts in space to Earth in addition to sending a hologram of Earth-bound users to space.

With two-way hologram communication tested from Earth to space (and vice versa), NASA aims to use this technology for off-Earth tele-mentoring.

“Imagine you can bring the best instructor or the actual designer of a particularly complex technology right beside you wherever you might be working on it,” Schmid said.

“Furthermore, we will combine augmented reality with haptics,” Schmid said. Haptics   refers to technology that can simulate touch through things like vibrations or motors. “You can work on the device together, much like two of the best surgeons working during an operation. This would put everyone at rest knowing the best team is working together on a critical piece of hardware.”

The possible future applications of hologram technology in space are far-reaching, according to NASA. The tech could support everything from advanced medical treatment, mission support or even to connect astronauts with their families back on Earth. The tech could also prove especially useful for future crewed deep-space travel to destinations like Mars, where we know astronauts will face significant communication challenges and delays.