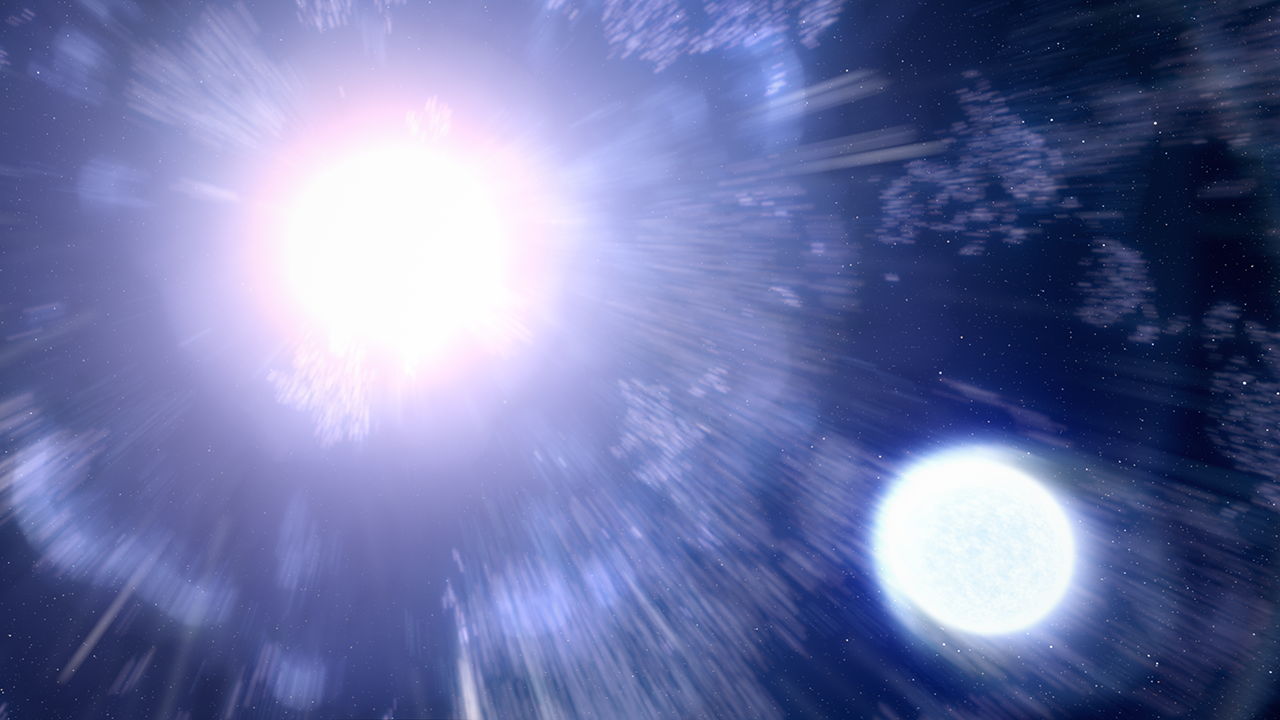 NASA’s most iconic space telescope has spotted a star that survived the violent death of its companion.

When a massive star reaches the end of its life, it explodes in a brilliant burst of light, also known as a supernova. This bright explosion can briefly outshine entire galaxies, which is how the star’s surviving partner remained hidden from view — until now. Using the Hubble Space Telescope‘s Wide Field Camera 3, researchers were able to study the supernova, dubbed SN 2013ge, in ultraviolet light. The scientists found that while the light from the bright stellar explosion has been fading since 2016, another nearby source of ultraviolet light has maintained its brightness over time, suggesting SN 2013ge has a surviving binary companion, according to a statement from NASA.

“This was the moment we had been waiting for, finally seeing the evidence for a binary system progenitor of a fully stripped supernova,” Ori Fox, an astronomer from the Space Telescope Science Institute in Maryland and lead investigator on the Hubble research program, said in the statement. “The goal is to move this area of study from theory to working with data and seeing what these systems really look like.”

Related: The best Hubble Space Telescope images of all time!

Using the Hubble data, astronomers were able to identify the signature of various elements in the supernova explosion. Strangely, no hydrogen was detected in the region of SN 2013ge, leaving scientists to guess at how the gas might have been stripped away before the explosion occurred.

The observations shed new light on the nature of massive stars in binary systems. Observations of SN 2013ge also help explain how some stars are stripped of their hydrogen pre-supernova, which, in this case, is the result of an unseen stellar companion siphoning gas from its partner before it explodes, according to the statement.

“In recent years many different lines of evidence have told us that stripped supernovas are likely formed in binaries, but we had yet to actually see the companion,” Maria Drout, an astronomer on the team from the University of Toronto in Canada, said in the statement.

“So much of studying cosmic explosions is like forensic science — searching for clues and seeing what theories match,” Drout added. “Thanks to Hubble, we are able to see this directly.”

Astronomers can now use SN 2013ge’s surviving companion to better understand the characteristics of the star that exploded, which has since become a compact object, such as a neutron star or black hole. The companion star will likely experience a similar fate, given that it, too, is a massive star.

An artist’s illustration of how massive binary stars form and evolve, before exploding as bright supernovas. Panels 1-3 show what has already occurred in the system that contains SN 2013ge, with one star reaching its red giant stage while its companion star siphons off its hydrogen. The red giant then explodes without destroying the companion star Panels 4-6 show what may take place in the future, with the companion undergoing a similar, explosive fate.   (Image credit: NASA, ESA, Leah Hustak (STScI) )

Now, the researchers will be able to track the surviving star’s evolution. Depending on the distance between the original companion stars, the surviving partner will either be flung out of the system — which could help explain why solitary supernovas are observed across the universe — or continue orbiting its companion before merging to create gravitational waves. However, such an event would not occur for a billion years, the researchers said.

“Understanding the lifecycle of massive stars is particularly important to us because all heavy elements are forged in their cores and through their supernovae,” Alex Filippenko, co-author of the study and an astronomer at the University of California at Berkeley, said in the statement. “Those elements make up much of the observable universe, including life as we know it.”

Their findings were published April 13 in The Astrophysical Journal Letters.

« Bitcoin 2022 — Will the real maximalists please stand up? » Stronger gravity in the early universe may solve a cosmological conundrum