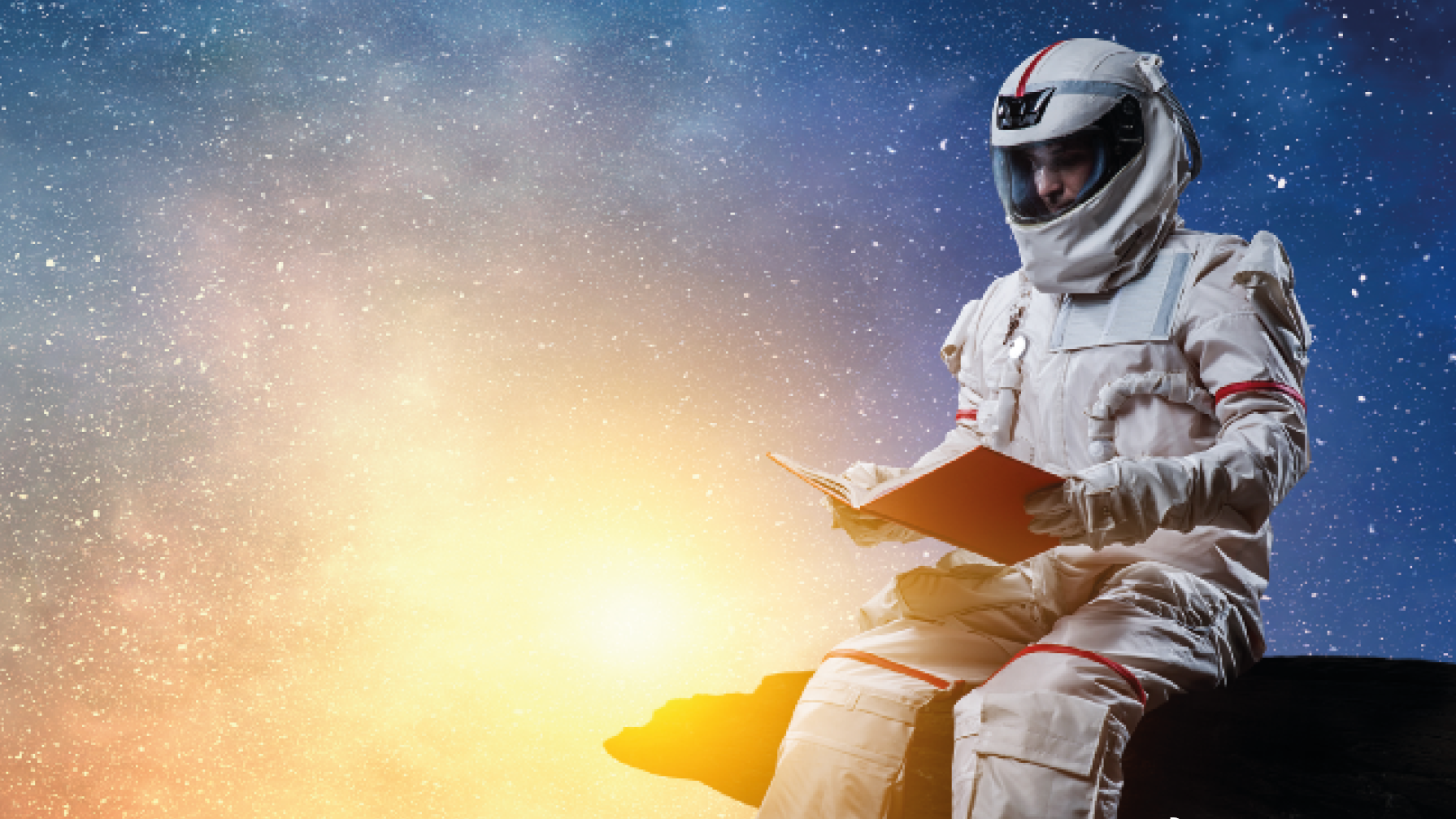 Choi, is the winner of Aurora Awards in 2011 and 2015, twice receiving one of the top Canadian prizes in science fiction. Choi spoke with Space.com about the publication of his recent collection, “Just Like Being There (opens in new tab)” (Springer Press, May 2022).

The 15 short stories are a collection of Choi’s work over the past 25 years, with each tale ending with an afterword explaining the real-life inspiration behind the characters, plot and other details.

Space.com caught up with Choi recently to discuss his new book and everything from “Star Trek” to Mars to how to use space as an inspiration for compelling storytelling. Read on to see what he said.

Eric Choi is a licensed professional engineer (P.Eng) with a B.A.Sc in Engineering Science and an M.A.Sc in Aerospace Engineering, both from the University of Toronto, and an MBA from York University. In 2009, he was one of the Top 40 finalists (out of 5,351 applicants) in the Canadian Space Agency’s astronaut recruitment campaign.

Space.com: How did you get started with storytelling?

Eric Choi: Throughout my life, science and science fiction aspects have almost been like two sides of the same coin. Some of my very earliest memories were of course, the earliest shuttle flights — including the first space shuttle mission, STS-1. Coincident with that was a long standing interest in getting inspiration from science fiction, including, of course, “Star Trek.” I was of that generation that wasn’t around when the original series aired in the 1960s. But as a kid, I did remember watching it in reruns.

I think my first memory of that show was this very unfortunate person in a red shirt, who was about to be consumed by some acid secreting creature. I later learned this was the classic “The Original Series” episode “The Devil in the Dark“, which actually scared me very much. I progressed in my engineering career. I never gave up on the science fiction aspects of it, either.

The big breakthrough came during my undergraduate studies in engineering science at the University of Toronto, where I entered a writing contest. It was called the Isaac Asimov Award at the time; it’s now the Dell Magazines Award. To my great shock, I actually won first place in that contest the first year that it was offered. That really got things going for me.

Eric Choi says he was inspired by a classic episode of “Star Trek”, during which he was terrified by the death of a “red shirt.” Traditionally, members of “Star Trek” crews in a red shirt are more prone to death and disappearance. But not always. (Image credit: Paramount Plus)

Space.com: Let’s go through story by story. We’ll first begin with the Aurora-award winning “Crimson Sky.” Can you talk about the science inspiration behind that?

Choi: The impetus behind that story goes back to my graduate studies at the University of Toronto Institute for Aerospace Studies. It came to my attention that there were people thinking about what it would take to operate or fly a heavier than local atmospheric air vehicle in a challenging environment like Mars. [Editor’s note: The NASA Ingenuity mission is testing out drone flights on Mars right now.]

I took these concepts from academic publications and I thought about what it would take to operate a crude version of these vehicles in the challenging Martian environment, and what the story is actually about is a search-and-rescue mission on Mars.

Next I got to thinking about, we have things like paramedics on Earth, or people needing to administer first aid. How would that work in space or on a challenging planetary environment like Mars? If somebody, for example, had a neck injury, how do you brace that? You obviously can’t ask that person to take their helmet off, for example. How would you deal with these things? How would you administer medication? You can’t just stick a needle into somebody’s arm very easily, when they’re wearing a spacesuit.

I was also interested in talking about the nature of exploration, and pushing frontiers. In some ways, it was prescient and reflective of some of the discussions and perhaps controversies in terms of some of the well-to-do folks that are interested in spaceflight nowadays. I’m very gratified that that the story has been well-received.

NASA’s Mars Perseverance rover is a very capable machine, but like all distant explorers it is subject to time delays. Eric Choi discusses how to get around time delays in his short story, “Just Like Being There.” (Image credit: NASA/JPL-Caltech/MSSS)

Space.com: What was your inspiration for your short story, “Just Like Being There”, which the anthology is named after?

Choi: That was written for a previous anthology put together by [Canadian science fiction writer] Julie Czerneda. She is actually a biologist by background, and was very interested in using science fiction to advance outreach and education and scientific literacy. She put together a series of books targeting younger readers that touched upon, or illustrated, aspects of the science curriculum in middle schools [junior high] in Ontario. I wrote that story for that collection with the intention of exploring that perennial question of humans versus robots. What are the pros and cons?

The context is that it’s set in a near future where, because of a series of tragedies involving human exploration, it’s been decided that we’re no longer sending people into space. There’s a bit of a hand-waving technology called an Ansible, which is a communications device that comes from Ursula Le Guin. With this technology, we’re able to remove one of the most serious impediments of robotic exploration, which is the [communications] time delay. When you’re trying to remotely operate a robotic system say, on Mars or further out into the into the solar system, if you could somehow operate without a time delay in real time, regardless of where you are in the solar system, it would be just like being there, right?

It turns out that the protagonist of the story, his father was one of the last people to explore Mars in person. So there’s a little bit of a crisis. There’s a little bit of an interpersonal conflict between father and son. I hope that what I’ve done with the story is not only to illustrate some of the fascinating science behind planetary exploration, but maybe stimulate some interesting discussion about the relative pros and cons of human or robotic space exploration.

Eric Choi says that he tries to write for the “near future”, meaning exploration that might be possible in a human lifetime or so. These two astronauts portrayed might happen for real, for example, when the Artemis program puts people on the moon as soon as the 2020s. (Image credit: NASA)

Space.com: The last story we’d like to talk about is “A Sky and a Heaven.”

Choi: The background of that story comes from two places. In 2003, I had the opportunity to go down to the Kennedy Space Center to watch the landing of STS-107, Columbia, which sadly and tragically didn’t happen. That experience has lingered and lingered with me all these years. A little more recently, in 2016, I had the opportunity to participate in a panel at the International Space University. One of the special events at that session was that the late widow of Ilan Ramon, the first Israeli astronaut who was killed on Columbia, was part of a distinguished panel. That deeply moved me as well. I was impressed with the enduring and legacy and the strength with which the memory of Ilan Ramon was being kept alive in Israel.

I was thinking of how to combine those elements into into an alternate history story. What had been on my mind for many, many years, as I’m sure has been on the minds of many people, is could anything have been done to save the crew of STS 107? The answer to that is yes, because this was actually well documented in the Columbia Accident Investigation Report. A flight options assessment detailed two scenarios. One was a rescue scenario involving another shuttle, and one was an attempt at an on orbit repair of the damage with an EVA [extra-vehicular activity, or spacewalk.]

So, these two scenarios were sketched out in the Columbia investigation report. Really, these things were the genesis of the story. This is in the genre of what they call an alternate history, or counterfactual. It took a lot of research to write this, but it was a very personal story. At the risk of being immodest, I’m quite proud of it. I’m pleased that it’s the closing story of my collection.

Eric Choi drew inspiration for one of his short stories from the STS-107 crew that died aboard the space shuttle Columbia in February 2003. (Image credit: NASA)

Space.com: If you’re just writing science fiction for the first time, how does one approach telling a good story while still being as respectful as possible of the science and the engineering without sacrificing the plot and all of those storytelling devices?

Choi: If people have interest in writing, simply do it. It’s not an easy thing. The late American science fiction writer and space enthusiast Robert A. Heinlein’s first rule of writing (opens in new tab) was if you want to be a writer, you have to write, and you have to finish what you write. If you can get up the the courage to do so, put it out there for people to read and to enjoy.

I tend to write in a sub genre that’s known as hard science fiction. This is the type of story where if one were to remove the scientific element, there would basically be no story. The prototypical example of that is Mary Shelley’s “Frankenstein.” The other aspect is that the science or engineering portrayed is either based on current understanding, or reasonable extrapolation thereof.

Obviously, the genre of science fiction is much broader and more diverse than that. The alternate history that I’ve written about in several of the stories in this book is arguably another sub genre of that, for example. I encompass these aspects of the hard science fiction as well as alternative history, or fantasy, or horror.

These stories really become, to quote American science fiction writer Larry Niven, playgrounds of the mind (opens in new tab). It’s a bit of a playground of the mind to think about what might be possible in in the near future. That appeals to me because the near future is where I hope people like you and I and many others are going to be spending more of our time. It’s kind of neat to get a little bit of a sneak preview of things that might come to pass in the not too distant future.

« A month on ‘Mars’: Flags and footprints of the moon and Arctic » Scientists blast atoms with Fibonacci laser to make an ‘extra’ dimension of time