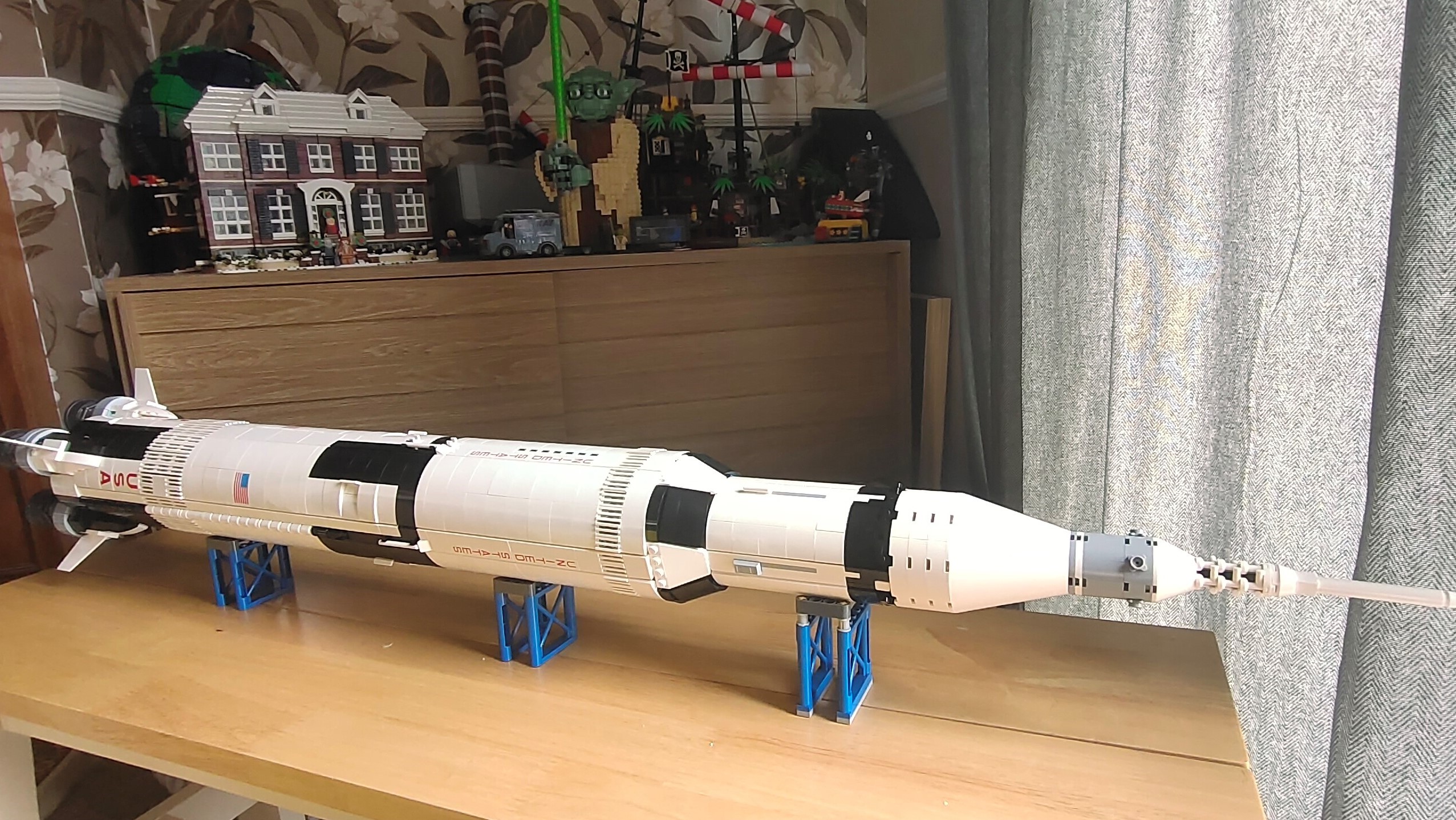 The Lego NASA Apollo Saturn V model is a strange one: it’s one of only a small handful of Lego models to get a re-release. It originally came out in 2017 under model number 21309 and was discontinued in December 2019. Come November 2020, it was re-released with the current model number (92176) and it remains identical.

Presumably the set’s success is the reason why Lego decided to put it back out on shelves, and after spending several hours putting it together, it’s not hard to see why people love it so much. It’s one of the most imposing Lego models out there; measuring just over a meter in length, there aren’t many sets to rival it in terms of scale. And for space fans, it’s an absolute must-have, thanks to the level of detail and accuracy compared to the real Saturn V.

It’s not all perfect, though. The very nature of the rocket means some parts of the build are rather dull and repetitive. And it’s presented on a very lackluster display stand. But we’ll get to all that in more detail in our full review below.

Looking for more Lego sets like the NASA Apollo Saturn V? Check out our guide to the best Lego space sets. And if you want to pick them up cheaper than RRP, we’ve got a Lego space deals page with your name on it.

Lego NASA Apollo Saturn V Review: BuildA fairly speedy build with many repetitive sectionsBut it’s split into clear sections, so you can build with a friend if you like

By the very nature of the Saturn V, it’s understandable that this is going to be a repetitive build. After all, it’s a long, cylindrical structure with repeating colours and patterns. And so, truth be told, putting together the Lego NASA Apollo Saturn V probably won’t be the most enjoyable Lego build you’ve ever completed. But really, it doesn’t matter too much – seeing this incredible set come together is all the reward you need.

That may be a little reductive, but it’s true: even five years after its initial release, there still aren’t many sets built to this scale. As you begin to stack its sections together and see the size of it come together, it’s impossible not to be impressed. Even half-way done, it’s taller than most other Lego models.

This is one of four double-page spreads making up the model’s instructions. (Image credit: Kimberley Snaith)

The building instructions for Lego NASA Apollo Saturn V come in one 180-page booklet, nicely presented with four double-page spreads providing information about Saturn V and the process of turning it into a Lego model. The building process is rather ordinary, with the pieces split amongst 12 numbered bags and, thanks to the repetitive section, you’re likely to get through it pretty briskly. Many sections ask you to build two or four identical parts at once, speeding up the build considerably.

Because the rocket is split into three distinct sections (and can be displayed in this formation, if display space is an issue), it’s a good set to build with a friend or family member. It would mean a second builder loading up the instructions on their phone or tablet, but when they’re readily available (opens in new tab), it isn’t much of a hardship.

There’s no denying that the design of Lego NASA Apollo Saturn V is the reason you’re going to want to buy this set. Regardless of the build process, this is a fantastic-looking set, and one that’s a very faithful recreation of its source material. For any space enthusiast, this is surely a must-have set. It really does look like the real rocket, only shrunk down small enough to fit in your living room.

Well, hopefully it’ll fit in your living room. Being a meter long, you’re going to need a decent amount of display space. It’s too long to fit on our bookshelf and currently it’s stood upright on a coffee table until we find a suitable space. But it’s the sort of thing you are going to want to display proudly.

The model can be displayed on this stand. (Image credit: Kimberley Snaith)

It’s just a shame that the display stand included – if you can even call it that – is rather underwhelming. It’s simply three blue brackets which support the rocket as it’s laid down. They do function as intended, admittedly, but as more and more Lego sets come with purpose-built display stands, this one shows its age. Had the Lego NASA Apollo Saturn V been released in 2022, it probably would have come with a better stand.

Printed lettering on the side of the model says “USA”. (Image credit: Kimberley Snaith)

But it’s also that original 2017 release that we reckon the Saturn V has to thank for its lack of stickers too. The cynical part of us thinks that those US flags and wording adorning the side of the rocket would have been stickers had this set released more recently. We’re really glad they’re not, because printed pieces have a much more premium feel.

The main purpose of the model’s ancillary model may be to demonstrate scale. (Image credit: Kimberley Snaith)

Alongside the rocket, Lego NASA Apollo Saturn V comes with two very small ancillary models: a lunar lander and lunar orbiter. These are both very simple and feel unnecessary. Sure, they provide some sense of scale, but you’re left with two tiny models that are easily going to get lost. They do, at least, come with tiny astronaut microfigures.

The short answer? Yes, go buy Lego NASA Apollo Saturn V. Particularly if you’re a NASA enthusiast, this is a set that you’ll be proud to have in your collection. It likely won’t be around for much longer, either, so grab it while you still can. Its 2017 price tag of $120/£105 makes it an absolute bargain alongside more modern releases, and its sheer size makes it more impressive than most. It may not be the most enjoyable build, but it really won’t matter once you’re admiring your finished model.

Other Lego space sets to consider

You’ll be glad to hear that Lego and NASA’s partnership is still running strong, with plenty of sets featuring official branding. If it’s another realistic craft you’re looking for, you should consider the NASA Space Shuttle Discovery. A 2,354-piece recreation of the real Discovery shuttle, this is a truly impressive set that complements Saturn V perfectly. There’s also the Apollo 11 Lunar Lander (opens in new tab) and the International Space Station (opens in new tab).

For something a little more play-oriented for younger builders, there’s a range of NASA-branded Lego City sets. For another (albeit less detailed) rocket, there’s the Rocket Launch Center (opens in new tab). There’s also the Lunar Research Base (opens in new tab) for some moon-based shenanigans.