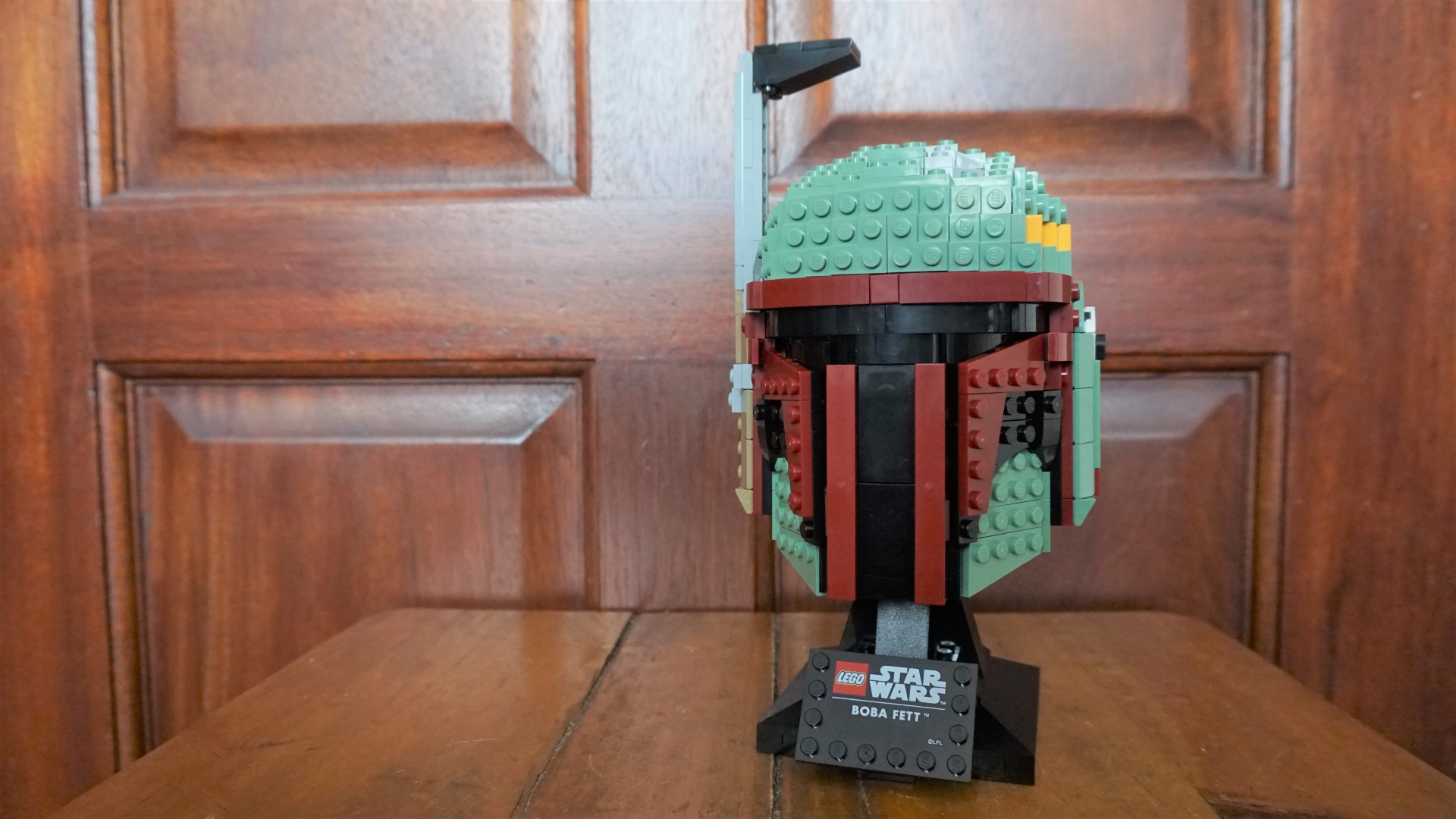 Lego’s helmet range has fast become one of the most popular ranges for adults. These sets don’t break the bank, they’re not huge, and they make for fun, challenging builds. Lego Star Wars Boba Fett Helmet was one of the first helmet sets released back in April 2020, and since then many others have followed. This remains one of our favorites though, mostly thanks to its instantly recognizable design.

When finished, these helmet sets don’t take up too much space so can easily sit on a shelf or a desk, either by themselves or accompanied by more in the range. They look great as part of a series, and standing next to our Stormtrooper and Scout Trooper, Boba Fett really does steal the show. Just remember, no disintegrations!

If you’re looking for more Lego content, why not check out our round-up of the best Lego Star Wars sets? Heading on over to our best Lego deals page might help you net a bargain, too.

If you’ve ever built a Lego BrickHeadz figure, Lego’s helmets are built in a similar way. Its internals are made up of SNOT bricks – that means studs not on top. By creating an inner square with studs around all of its sides, you can then layer up Boba Fett’s helmet features piece by piece. It takes a while for it to start taking shape, but it eventually all comes together nicely.

The Lego Star Wars Boba Fett Helmet pieces are spread over five bags, and in total the build will likely take you between one and two hours to complete, depending on how experienced of a builder you are. The first bag is concerned with putting together the helmet’s innards – a frame covered in those afore-mentioned SNOT bricks which then get built upon. By the end of bag two, you’ll have built a tidy-looking black stand on which the helmet sits on. These are uniform across all sets, making them look excellent if displayed as a collection. A printed plaque with the set’s name on really finishes it off. It isn’t until bag three that Boba Fett really starts taking shape. Once you start placing those sand green bricks around the frame, there’s no mistaking what the finished product is going to be.

There are some interesting – and somewhat unorthodox – building techniques employed in putting together the Lego Star Wars Boba Fett Helmet. Ever noticed how Boba Fett has yellow stripes on the side of his helmet? We hadn’t, not until we built the set. But Lego miss no detail, and lo and behold – he does indeed have an array of stripes on the side of his head. In the model, these are cleverly built sideways; an array of yellow and green bricks are slid onto a rail, with bricks around them holding them in place. It’s a super neat technique, and one that’s very effective when complete.

Because most of Boba Fett’s helmet is created in chunks, which are then affixed onto the central frame, it’s easy to go back and rectify something if you – God forbid – make a mistake while building. We made a silly mistake very early on that wasn’t spotted until close to the end of the build. But thankfully it was straightforward enough to remove the sides and find what needed to be fixed. Don’t do what we did, though – pay closer attention while building!

Ours was an easy mistake to make, and it’s partly down to the fact that the printed instructions to go along with the Lego Star Wars Boba Fett Helmet are not the best quality. Like other sets in the range, the pages are black and partly glossy. It makes it difficult to clearly see in some lights, particularly when it comes to distinguishing dark green bricks – which really don’t stand out very well on a black page.

Thanks to his striking color scheme, Boba Fett is one of the most iconic mainstay Star Wars characters there is, and in Lego form that really shines. Next to an all-white Stormtrooper or an all-black Darth Vader helmet, Boba Fett’s helmet mix of sand green, dark green, and dark red (and those yellow stripes) really stand out.

When it’s finished, the Boba Fett helmet is a really solid build that, unlike some other Lego display models, you don’t feel is going to break every time you pick it up. We wouldn’t suggest throwing it around, of course, but moving it from one display place to another should be no problem. And, no matter where you decide to put it, it’s going to look great. We’ve settled on sitting it alongside our other Lego helmets, but even by itself, the Lego Star Wars Boba Fett Helmet looks fantastic.

Our only real gripe with this kit – and Lego’s helmet range in general – is that they don’t contain any minifigures. A minifigure to match the helmet, to stand aside the display plaque, would really round off the set perfectly. Still, it’s not the end of the world; there are plenty of sets out there that do contain Boba Fett (see our ‘Other sets’ section below).

If you’re a fan of Boba Fett – whether from the classic Star Wars trilogy or from the recent The Book of Boba Fett – then there’s no denying that the Lego Star Wars Boba Fett Helmet will make a great addition to your collection. This isn’t a kid’s toy in any way, so perhaps avoid it for younger children who like to play with their models once built. But for adults and older kids who would like a fun build followed by an excellent display piece, we don’t think you’ll be disappointed.

Again, bear in mind that this Lego kit doesn’t contain any minifigures, so if you’re a collector of Lego’s little figs, then this may not be the set for you. But if that’s not an issue, and particularly if you’ve already got other Lego helmets in your collection, this Boba Fett headgear replica is an excellent buy.

If you’d like more Boba Fett-related sets, then the brand-new Lego Star Wars Boba Fett’s Throne Room is worth consideration ($99.99/£89.99), which recreates a scene directly taken from The Book of Boba Fett. There’s also Boba Fett’s Starship, a recreation of his unique vertical-flying craft – and that won’t break the bank either, at just $49.99/£44.99.

Perhaps the perfect companion piece to the Lego Star Wars Boba Fett Helmet, however, is The Mandalorian Helmet ($59.99/£54.99). With a similar design and theme, and both sporting matching stands, the pair will make the ideal double display set.