Meet Elliott Tanner, the 13-year-old who just got his college degree in physics 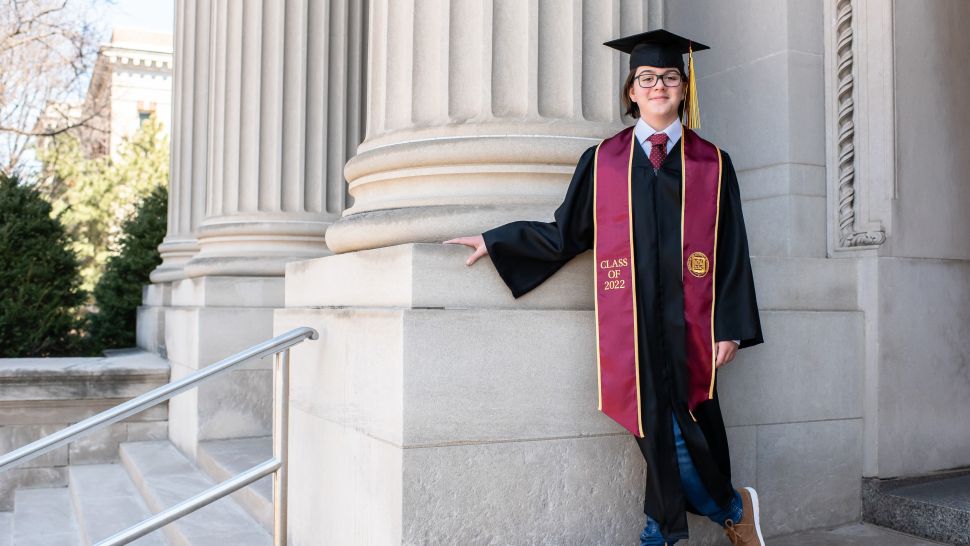 A child science prodigy has wowed his professors and classmates by becoming a college graduate at the age of 13. Elliott Tanner recently graduated from the University of Minnesota with a bachelor’s degree in physics, with a minor in mathematics.

“I feel ecstatic,” Elliott, a Minnesota resident, told Live Science. “It is a truly surreal experience.”

Though incredible, this achievement does not make Elliott the youngest college graduate in U.S. history. That title belongs to Michael Kearney, who graduated from the University of South Alabama with a bachelor’s degree in anthropology in 1992 at the age of 10, according to the BBC.

Elliott’s parents are “incredibly proud” of the hard work and dedication he displayed to get his degree at such a young age and are pleased that he has become an inspiration to lots of people. “While he has an amazing capacity to learn, he’s also a kind and funny human being,” Michelle Tanner, Elliott’s mom, told Live Science. “He inspires us to be better people everyday.”

Elliott plans to earn a doctorate if his parents can raise the necessary funds. In the future, Elliott aims to be a professor at the University of Minnesota and become an expert in high-energy theoretical physics, the study of the most elementary building blocks of matter and the fundamental forces between them. “I can’t wait to get started,” he said.

Age is just a number

Elliott’s parents first realized their son was gifted before he started school; he displayed remarkable language and math skills from the age 3. When he was 5, Elliott enrolled in his local kindergarten but was quickly taken out of school when it became clear that a traditional education experience would not be a good fit for him.

“He was talking about particle accelerators when he was 5 years old, when other kids were pretending to be Superman on the playground,” Michelle said.

Elliott was then homeschooled by his parents, who supported his inquisitive nature and appetite for knowledge on their own. The pair tried to limit Elliott to the curriculum of his peers, but despite their best efforts, he advanced at an astonishing rate.

“Elliott ended up learning and consuming information quicker than we could provide it,” Tanner said. “His room was filled with textbooks that he would read immediately.” He often chose to spend his birthday money on books instead of toys or games, she added.

By age 9, Elliott had already completed most of the normal high school curriculum, and his parents were struggling to keep up with him. So they enrolled him at his local community college. “As parents, we were terrified,” Tanner said. “But he excelled, and the school administration and other students took him under their wings.”

It was at community college that Elliott really forged his passion for physics. “For a long time, I wanted to be a mathematician,” Elliott said. “Then I was exposed to a physics class that really intrigued and inspired me to learn more about the secrets of the world.”

When he was 11 years old, Elliott transferred to the University of Minnesota to start studying physics and math. The ease with which Elliott transitioned to college life came as a shock to his professors and his significantly older classmates.

“There is sometimes a short period of confusion as to why I am there [in class], but that wears off quickly,” Elliott said. Although his college experience is a little different from that of his classmates, Elliott still hangs out with his peers in the student lounge, discussing homework, debating physics topics or watching movies.

“Being exposed to people that are just as passionate about physics as he is has been incredibly rewarding for him,” Tanner said. “It satisfies his mind to be able to dive deep in with others at his level and learn from amazing scientists.”

Elliott has also had to deal with the media coverage that comes with being a prodigy. He is often compared to Sheldon Cooper, the main character in “The Big Bang Theory” spinoff “Young Sheldon,” and he said he has even become friends with Iain Armitage, the actor that plays Young Sheldon.

“Young Sheldon has shown some of the hardships I have faced,” Elliott said. “And I do appreciate seeing other gifted people on shows.”

One of the biggest challenges Elliott and his family have faced is criticism, especially online, from people who do not understand his situation and make snap judgments about what his life must be like.

“People seem to have a preconceived notion that Elliott’s childhood has been stolen from him,” Tanner said. “People also assume he must be lacking in social skills.” But this couldn’t be “further from the truth,” she added.

However, Elliott has always enjoyed interacting with kids his own age, Tanner said. He loves playing with other neighborhood children, doing stuff like building cardboard armor, making board games, visiting amusement parks and playing “Dungeons and Dragons.” And just like the other kids, Elliott goes trick-or-treating on Halloween, but with a decidedly academic twist: He dresses up as Albert Einstein or theoretical physicist Richard Feynman, his favorite scientist.

Elliott has been accepted into the University of Minnesota’s physics doctoral program and is due to start his doctorate in the next academic year. Unfortunately, his acceptance into the program has not come with the financial support students would normally receive.

Usually, the university provides students with a package that includes a stipend (basic salary), health insurance and a tuition waiver. In this case, however, the physics department opted not to because they have apprehensions about giving Elliott teaching responsibilities, which is a big part of the program. The decision came as a surprise to Elliott’s parents, who were relying on the grant to support Elliott’s education. They estimate that the entire doctoral program will cost around $90,000 to complete.

“We never imagined sending a 9-year-old to college, let alone a 13-year-old to graduate school, so we never had the time to build up a college fund,” Tanner said. The only option left was to start a GoFundMe campaign, she added.

As of April 28, Elliott’s GoFundMe page has raised more than $28,000, which means that he should at least be able to complete the first year. “We are so grateful that our friends, family, community and the general public have supported Elliott,” Tanner said. “He wouldn’t be able to continue his studies without the support.”