In August 2018, Nvidia’s founder and CEO Jensen Huang revealed the RTX line, the company’s first GPUs capable of real-time ray tracing. It marked an inflection point in video game rendering that is still gradually being adopted, with many of its lofty promises still needing to materialize. One of those was Metro: Exodus–one of the first games to adopt some form of ray tracing support, but not to the degree teased by Huang. It’s taken three more years to get to that, but Metro: Exodus Enhanced Edition delivers the most convincing example yet of why ray tracing is so exciting.

Ray tracing, if you’re unfamiliar, is a technique of sending out numerous “rays” (straight lines from in-game objects) into a scene and collecting data from other objects they come into contact with. This allows for more information for a game engine to digest from a scene, especially from game objects not currently in a player’s view. In many games, ray tracing is implemented in a variety of small ways. Some, like Control, focus heavily on reflections, be it off shiny surfaces or translucent glass. Others use it on lighting–in the case of Returnal, for its many, many particle effects. The reason ray tracing is implemented sparingly is that it can be a drag on graphical performance, and game engines are still working to catch up to support the full suite of options ray tracing offers.

The Enhanced Edition for Metro: Exodus, through a free update to all players on PC, features a completely reworked version of the game running on a new version of its engine with ray tracing as a core feature, which leads to drastic changes in the game’s visual presentation.

The biggest change is the game’s Global Illumination system, which is now entirely handled by ray-traced lighting. That means every light source, from the sun to the bullet-shaped lighter in protagonist Artyom’s pocket, casts its own light rays onto surfaces in the game that bounce and illuminate the area. Combined with technically complicated emissive surfaces (allowing distinct objects like a lightbulb or a flame to propagate light according to their shape and size) and light color mixtures (the light from your flashlight and the nearby glow of a campfire can fuse in real time), it produces a lighting system that is one of the most impressive you might see in a modern video game. Just from a technical standpoint, it’s exciting to see Metro: Exodus’s ray tracing systems running in real-time at all, nevermind smoothly with appropriately powerful hardware (the Enhanced Edition requires a GPU with hardware-accelerated ray tracing support, which certainly helps).

Despite its advantage over traditional lighting techniques (commonly known as rasterization), it might be an improvement that’s not immediately apparent without a direct comparison to the original version of the game. Given how prominent rasterization has been for so many years, developers, like 4A Games, have become very good at faking lighting to look as realistic as possible without light sources physically interacting with one another. But when they do, the moods of certain scenes change entirely. The prologue through the dark tunnels of the metro seems less ominous, thanks to cracks in the ceiling and crackling bonfires flooding rooms with light in a way that wasn’t previously possible. Traditional lighting is a lot more finely tuned in its implementation in a way that this more physically accurate method doesn’t replicate. Developer 4A Games still had to adjust, as detailed in Digital Foundry’s extensive technical breakdown, but for the most part, the engine is letting light sources react off each other in a way that you’d expect from real life.

Games don’t often reflect reality in a way that is accurate, with saturations and embellishments used to intensify effects that are pleasing to the eye. That isn’t to say that ray tracing’s more accurate direction doesn’t produce those same moments of splendor. Once above ground and moving in and out of dilapidated structures, the true strength to Metro: Exodus’ new shine reveals itself. The way light produces soft, accurate shadows and ambient occlusion (the calculation made to determine how brightly lit a game object should be) on static and moving objects alike is mesmerizing, in a way that makes it difficult to look back to the heavily faked implementations of the same thing in most modern games.

This is especially true in the game’s open areas with a dynamic day/night cycle, where environments change in drastic ways based on the time of day. It makes sneaking into an enemy camp at night, for example, feel more immersive, as the absence of light sources shrouds you completely in darkness. Watching light sources glow in the distances and illuminate their surroundings with the correct color and intensity allowed me to make my way around areas more intelligently, while I took pleasure in extinguishing candles and lamps to disappear again from an enemy’s view. 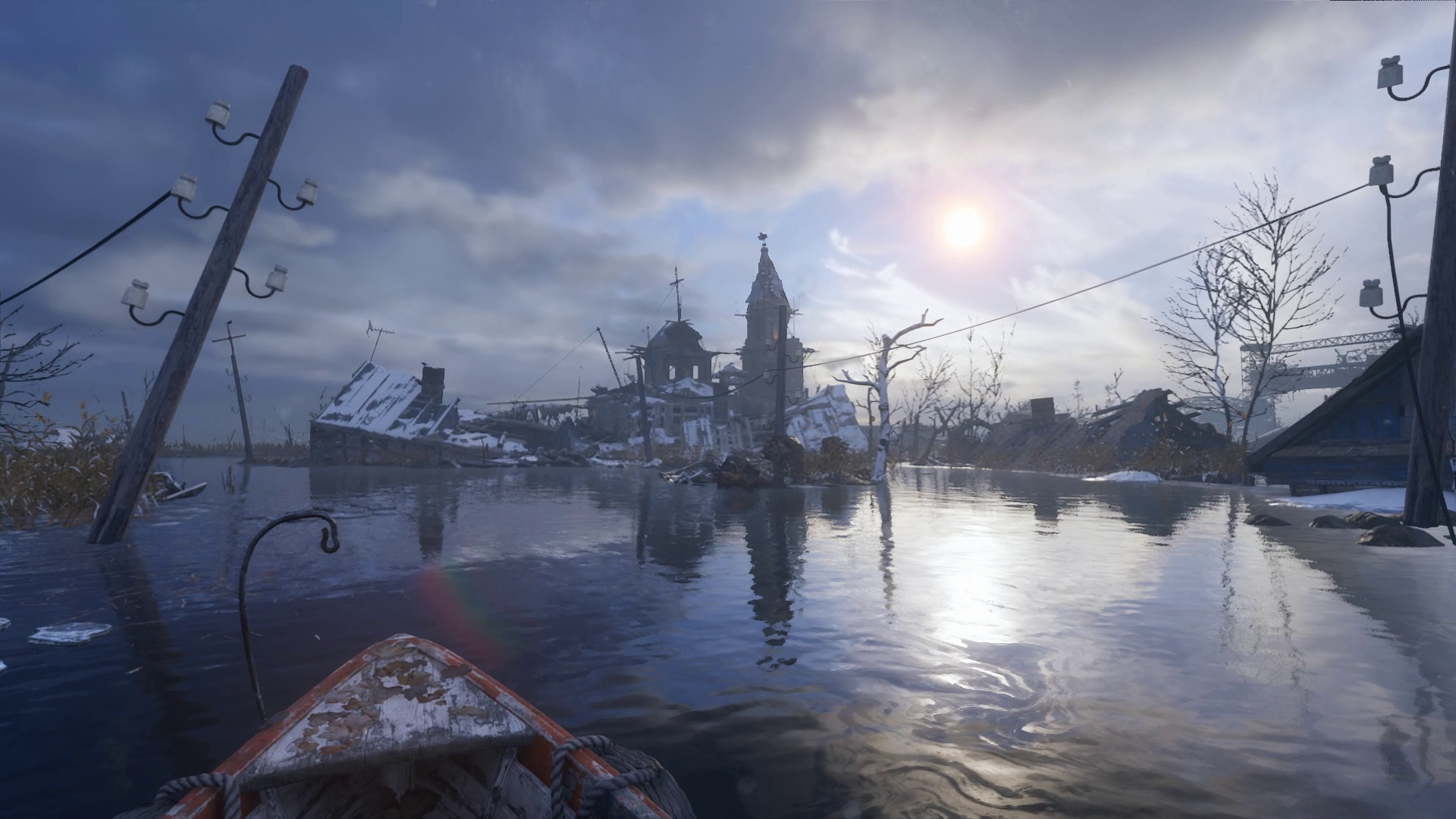 It’s something that needs to be seen to be believed, especially since most of the conversation regarding ray tracing centers squarely on its implementation of reflections. Metro: Exodus doesn’t skimp on this either, but it’s far less impressive than the game’s global illumination. Like other titles, reflections on surfaces like water are ray-traced rather than adapted from what is currently on screen, letting you see objects outside of your view rendered convincingly in reflections. There is a steep cut-off as to where this starts, however, and you might often see instances where objects around you disappear from reflections as if they’re being calculated using traditional screen-space techniques. Given that Metro: Exodus takes place mostly outdoors and not in an environment with thousands of reflective surfaces, it’s less noticeable than in a game like Control. And it’s still an improvement over the original, which had no ray-traced reflections at all.

All of this comes with a cost, however, and you’ll need a capable GPU to really keep up with the splendor that this Enhanced Edition offers. To ease things a bit, this new version also features the latest version of Nvidia’s DLSS technology, which is a big improvement over the initial implementation on the original game. When Metro: Exodus was released, DLSS was criticized for producing an extremely blurry image, as its AI-assisted reconstruction wasn’t fully optimized. Given that Metro: Exodus was the first game to support it, it’s great to see this latest, improved DLSS version in the game now, letting you extract many more frames per second without nearly as much of a hit to visual quality. It’s essential if you’re planning to play at higher resolutions or on older cards such as the RTX 2070. It makes more of an impact than the new Variable Rate Shading setting, too, which doesn’t really seem to improve performance all that much.

If you have the hardware to support it, Metro: Exodus Enhanced Edition makes an already visually stunning game more eye-catching while also providing a glimpse into a future where ray-traced lighting replaces all the great rasterization techniques of old. It’s the most all-encompassing attempt yet at proving why ray tracing is so exciting and provides more than enough reason to return to the survival shooter just to play around with its physically reactive systems. Considering it’s free, too, it’s hard not to recommend giving it another pass.