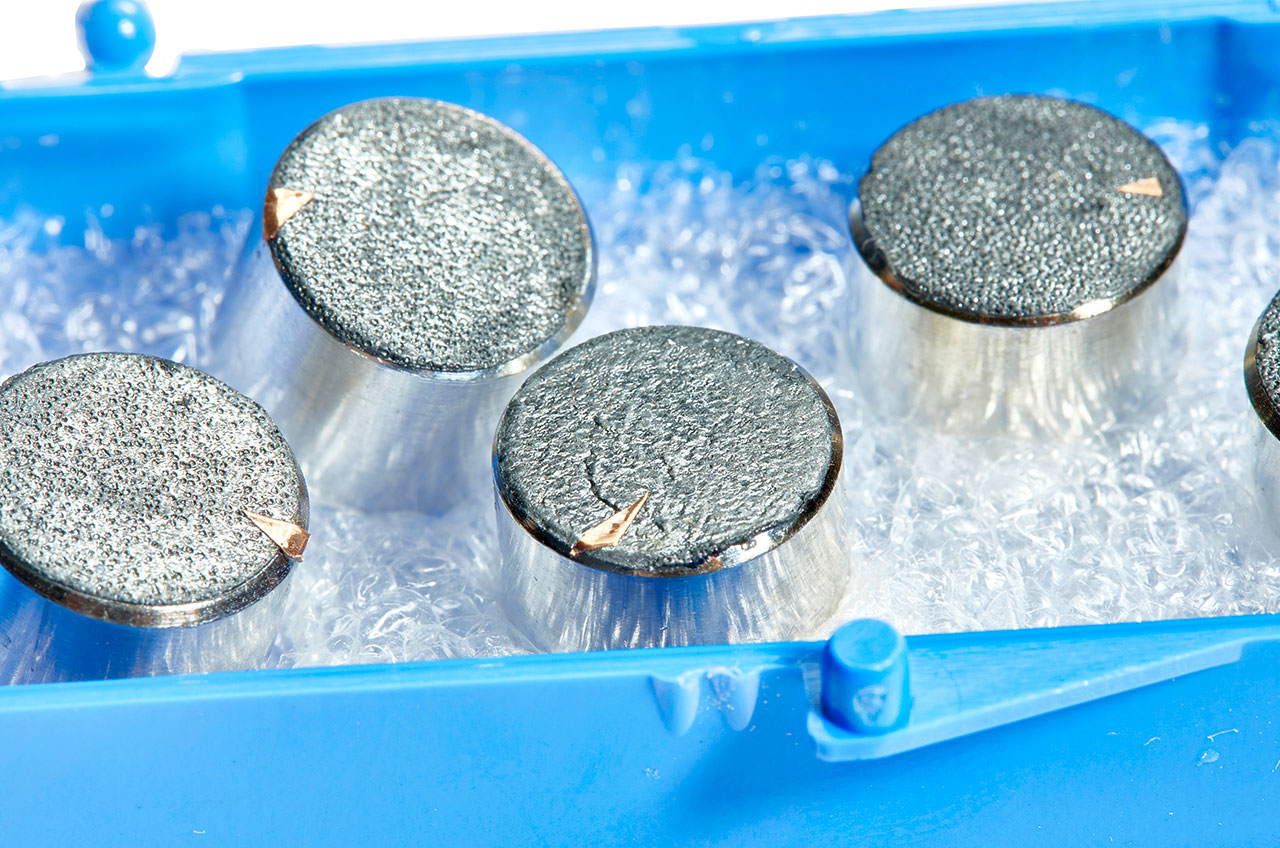 Microscopic pieces of the moon that were found inside a bag used to protect the first astronaut-collected lunar sample are heading for auction after being released from NASA property.

Bonhams on Monday (March 28) announced that its upcoming Space History sale includes “the first lunar sample collected by humanity.” The lot offers five scanning electron microscope (SEM) aluminum sample stubs, four of which are said to be topped by particles from the first lunar sample that Neil Armstrong gathered shortly after he became the first person to walk on the moon in July 1969.

The specks of suspected moon dust were later used by NASA to determine that the pouch — or, contingency sample return container decontamination bag — had flown on the Apollo 11 mission after it was sold at a government forfeiture auction in 2015. A series of lawsuits between the auction winner, Nancy Lee Carlson, and the U.S. government resulted in the bag being declared Carlson’s property.

A subsequent legal dispute, which was settled out of court, ended with NASA also turning over the test samples to Carlson, after she had sold the lunar sample bag at a 2017 auction for $1,812,500.

Now, Bonhams anticipates the minuscule traces from Tranquility Base will sell for $800,000 to $1.2 million when they are auctioned on April 13 in New York.

The Apollo 11 moon particles as seen using a scanning electron microscope. The geological makeup of the sample allowed NASA to identify the origin as the moon’s Sea of Tranquility. (Image credit: Bonhams)

“It’s an interesting story,” Adam Stackhouse, Bonhams’ specialist who oversaw the lunar samples’ consignment, said in an interview with collectSPACE.com. “I tried not to focus just on the story of Nancy getting the dust. That was really fascinating, a real struggle and interesting for sure, but there are a lot of ways to look at it.”

Stackhouse centered on the history of the samples and the fact they are linked to the first-ever scoops of lunar material by an astronaut standing on the moon.

“This sample was intended to provide at least a small amount of lunar material for return to Earth if it were necessary to terminate the surface portion of the mission early,” Bonhams quotes a NASA publication, explaining where the particles now at auction originated.

The so-called “contingency sample” included 492 grams (17.35 ounces) of material finer than 1 centimeter (0.4 inches), as well as 12 rock fragments larger than 1 cm, all of which remain NASA property. Bonhams did not provide a total weight for the particles lifted from the decontamination bag, but measurements taken during the gallery’s contracted analysis found the individual specks to be mere microns in size.

“I wonder if you could see it were it not on the sample stubs,” said Stackhouse. “I think if it were still on the bag you would see it more. That’s what I suspect. On the black carbon tape, you see the carbon tape.”

Bonhams is set to auction five scanning electron microscope (SEM) aluminum sample stubs, four of which are said to be topped by particles from the first lunar sample that Apollo 11 astronaut Neil Armstrong gathered shortly after he became the first person to walk on the moon in 1969. (Image credit: Bonhams)

Despite their tiny size, Stackhouse said the lunar samples are unique, given their connection to the Apollo 11 mission and that their title is backed by a trail of court rulings establishing that they are no longer NASA property. The space agency maintains that Apollo-recovered lunar material is a National Treasure and is not for private ownership, with the narrow exception of astronaut-retained mementos that had been stained with lunar dust and two sets of international goodwill gifts.

“If it hadn’t gone through something like this, it probably wouldn’t be at auction,” Stackhouse told collectSPACE, referring to the court cases. “It is kind of a unique situation. I don’t see how this is going to happen again.”

In addition to the moon particles, Bonhams’ sale includes 20 other lots of space history relics, including a piece of the rocket that launched the world’s first satellite.

Bonhams is also auctioning a piece of the rocket that launched the world’s first satellite, Sputnik 1, on Oct. 4, 1957. (Image credit: Bonhams)

The 9.5-inch by 1.4-inch (24 by 3.6 cm) aluminum fragment was removed from an oxygen tank by Soviet-era cosmonaut Georgy Grechko, who as a young engineer participated in the Sputnik 1 satellite launch on Oct. 4, 1957, and came across the R7 rocket’s first stage after it fell back to Earth.

Described as the only such known piece in private hands, the artifact from the first day of the Space Age is estimated to sell for $80,000 to $120,000.