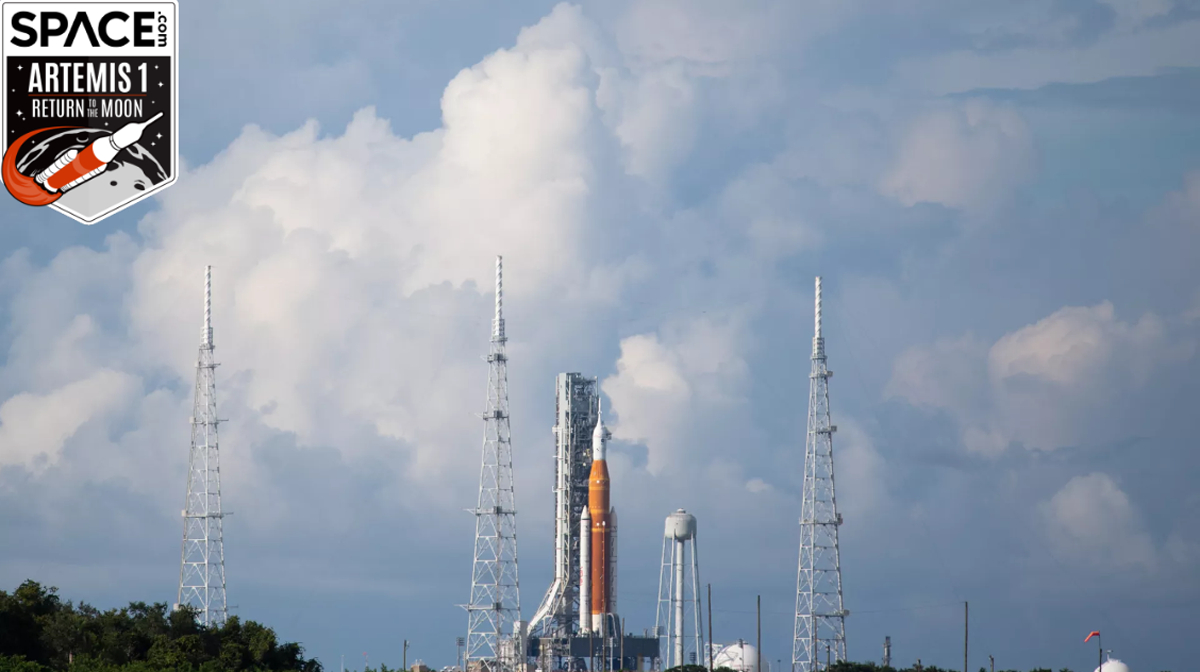 CAPE CANAVERAL, Fla. — The countdown is ready to begin for NASA’s biggest test flight of the year.

At 10:23 a.m. EDT (1423 GMT) today (Aug. 27), the countdown clock will start ticking down to the planned launch of NASA’s Artemis 1 mission, an ambitious first flight to the moon by the agency’s most powerful rocket ever — the Space Launch System (SLS) — and its Orion spacecraft. The uncrewed test flight is scheduled to launch Monday (Aug. 29) at 8:33 a.m. EDT (1233 GMT) from Pad 39B here at the Kennedy Space Center.

“This first launch is another step in the blueprint of our sustainable exploration of the solar system,” Jim Free, NASA’s associate administrator for exploration systems development, told reporters here in a briefing Friday. You can watch the Artemis 1 moon mission launch live online, courtesy of NASA TV. A live webcast will begin Monday at 6:30 a.m. EDT (1030 GMT).

Artemis 1 is the vanguard mission of NASA’s Artemis program, which aims to return astronauts to the moon by 2025 and land the first woman and person of color at the lunar south pole, a region astronauts have never seen with their own eyes. The mission flight will send an uncrewed Orion capsule on a 42-day trip to orbit the moon and return to Earth to test if the spacecraft is ready to carry astronauts.

If this mission succeeds, NASA will follow it up with Artemis 2, a crewed trip around the moon in 2024, which will then lead to the Artemis 3 crewed lunar landing a year later. The ultimate goal, NASA has said, is to fly yearly missions to the moon after Artemis 3, stage crewed landings from a Gateway space station in lunar orbit and then aim for crewed flights to Mars.

There is a 70% chance of good weather for the Artemis 1 launch, with scattered rain showers as the main concern, according to NASA (opens in new tab) and the U.S. Space Force‘s Space Launch Delta 45 weather group. NASA has a two-hour window in which to launch Artemis 1 to allow for some wiggle room if Mother Nature doesn’t cooperate.

During the two-day countdown for Artemis 1, NASA launch controllers will put the mission’s 322-foot-tall (98 meters) Space Launch System megarocket and its Orion spacecraft through their final paces for flight. Engineers closed the hatch on the Orion capsule for the last time on Thursday (Aug. 25).

On Friday, engineers also closed the hatch on the SLS rocket’s launch abort system, which sits atop the Orion spacecraft, and retracted the crew access arm astronauts will eventually use to board the spacecraft for future missions.

NASA will begin fueling the SLS rocket in the wee hours Monday morning, which NASA will webcast live at 12 a.m. EDT (0400 GMT). You’ll be able to watch that event live on Space.com, courtesy of NASA TV, on our Artemis 1 webcast page.

« Bitcoin price briefly loses $20K on ‘bunch of nothing’ Powell speech » I FINALLY Figured Out How To Do This Trick!!