‘Needle in a haystack’ black hole discovered in neighboring galaxy 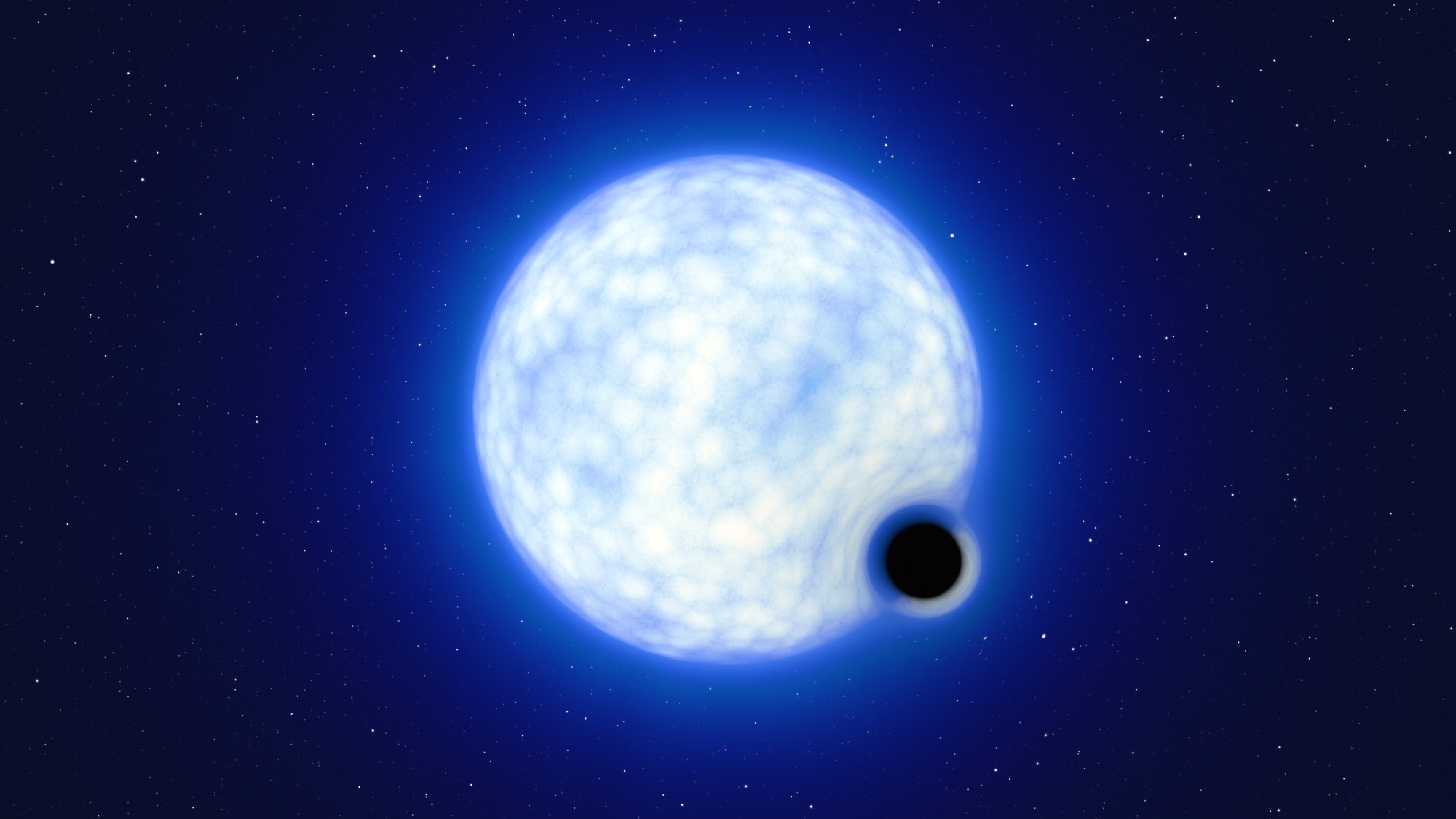 Scientists have spotted an example of a black hole that should be extremely common but is quite difficult to find.

The challenge of discovering what astronomers call dormant black holes comes from the fact that these objects are not actively feeding on matter like gas, dust or stellar material stripped from a companion star. With no feeding, these black holes don’t blast out X-rays, which scientists use to spot typical black holes. The new discovery could have ramifications for understanding how stars collapse at the end of their lives, according to the researchers.

“We identified a needle in a haystack,” Tomer Shenar, an astrophysicist at the University of Amsterdam in the Netherlands and lead author on the new research, said in a statement (opens in new tab) .

Related: 8 ways we know that black holes really do exist

An illustration of a hot blue star and a black hole in a binary system. (Image credit: ESO/L. Calçada)

Shenar and his colleagues discovered a stellar-mass black hole that contains about nine times the mass of the sun and is located in the Tarantula Nebula, a star-forming region of a galaxy neighboring ours, the Large Magellanic Cloud. The black hole orbits a huge blue star with a mass equivalent to 25 suns; the duo make up a binary system that has been named VFTS 243.

Despite the fact that billions of dormant black holes are expected to exist in almost every galaxy, this is the first unambiguous detection of a dormant stellar-mass black hole outside the Milky Way.

This black hole may be extraordinary for another reason too. Stellar-mass black holes typically form when massive stars run out of the fuel needed to continue nuclear fusion. The end of fusion also ends the outward pressure that supports the star against complete gravitational collapse. The so-called core collapse that follows is usually accompanied by a massive cosmic explosion called a supernova that blows away the star’s outer layers.

However, the situation for the black hole in VFTS 243 seems to be different, with no visible traces of a supernova accompanying the star’s collapse.

“The star that formed the black hole in VFTS 243 appears to have collapsed entirely, with no sign of a previous explosion,” Shenar said. “Evidence for this ‘direct-collapse’ scenario has been emerging recently, but our study arguably provides one of the most direct indications. This has enormous implications for the origin of black-hole mergers in the cosmos.”

The discovery of such a black hole by this particular team of scientists may come as something of a surprise to the astronomy community.

The team typically works on disproving the existence of potential black holes, rather than confirming them. This tendency has earned the crew the playful nickname “the black hole police,” with co-researcher Kareem El-Badry of the Center for Astrophysics at Harvard and Smithsonian dubbed “the black hole destroyer” by Shenar.

“When Tomer [Shenar] asked me to double check his findings, I had my doubts,” El-Badry said. “But I could not find a plausible explanation for the data that did not involve a black hole.”

Discovering VFTS 243 required the team to scrutinize six years’ worth of data collected the Very Large Telescope (VLT), which is located in the Atacama Desert region of Northern Chile. In this data, the scientists probed 1,000 massive stars in the Tarantula Nebula region of the Large Magellanic Cloud to discover if any of these stars could have a dormant black hole companion.

For each star, the team analyzed its spectrum, which measures how much light a star emits at given wavelengths. And in the VFTS 243 data, the researchers spotted quirks in the star’s orbit, as would be caused by a compact but massive companion.

Still, the “black hole police” is leaving room for other scientists to take over their usual role.

“Of course, I expect others in the field to pore over our analysis carefully, and to try to cook up alternative models,” El-Badry said.

The team’s findings are discussed in a paper (opens in new tab) published Monday (July 18) in the journal Nature Astronomy.