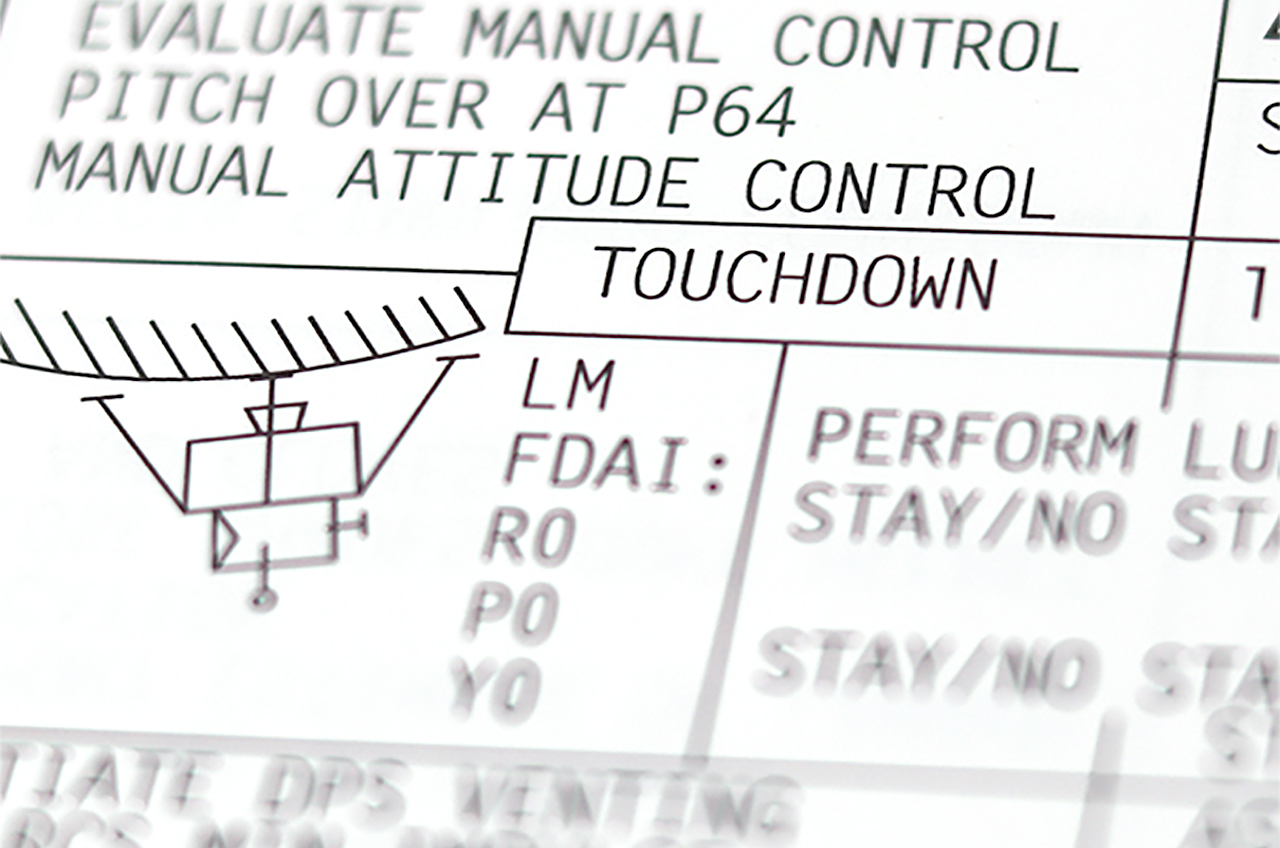 More than half a century since its pages served as humanity’s first roadmap to the moon, NASA’s Apollo 11 flight plan has been relaunched.

More than a simple reprint, this new edition from RelaunchSpace (opens in new tab) has been reconstructed from the ground up so that it appears exactly as it did when it was prepared in 1969 by the flight planning branch of the flight crew support division at the Manned Spacecraft Center (today, the Johnson Space Center) in Houston.

Used in flight by astronauts Neil Armstrong, Buzz Aldrin and Michael Collins while they were on board the Apollo 11 spacecraft and referenced by flight controllers in Mission Control, the flight plan provided a second-by-second playbook for every action needed to go to the moon and safely return, from liftoff to touchdown on the moon, to splashdown back on Earth.

Related: The Apollo Program: How NASA sent astronauts to the moon

“To me, these vintage documents are not just major engineering achievements, they’re works of art,” said Alan Gibson of RelaunchSpace, whose idea it was to republish the flight plan and who led the small team that brought the project to fruition. “I looked around for a copy of the flight plan and I wasn’t happy with the options I found.”

“I just couldn’t find anything on the market that did it justice,” he said.

“Apollo 11 Flight Plan: Relaunched” is a reference book but also a “curiosity and conversation piece for the truly hardcore space fans out there.” (Image credit: RelaunchSpace)

“Apollo 11 Flight Plan: Relaunched (opens in new tab)” was released earlier this year and is available for order on this, the 53rd anniversary of the mission.

collectSPACE.com spoke with Gibson about the process that went into recreating the Apollo 11 flight plan and the plans he has underway for relaunching additional vintage Apollo documents. This interview has been edited for length and clarity.

collectSPACE (cS): As you mention, you at first went looking for a modern reprint of the Apollo 11 flight plan before setting off to make your own. What were your issues with the versions that have been offered since the 50th anniversary of the moon landing mission in 2019?

Alan Gibson: I originally wanted to just buy a copy of this 2016 reissue (opens in new tab) that was crowdfunded using Kickstarter. However, if you read through the comments on Kickstarter, it turned into quite a disaster. There were missing pages, obvious errors in the reproduction, lots of people didn’t get their books, etc. There is even one glaring error in their own photos.

Given how quickly they met their funding goal, my guess is that they blew all their money on advertisements. When they realized they could never make their money back, they just took their website down and walked.

There is also this one (opens in new tab). I’ve got a lot of respect for what Constance Metzinger is doing with reproductions, but to me cleaned up scans just aren’t up to snuff.

I was also aware of the deluxe version (opens in new tab) prepared by former astronaut Terry Virts. It is very nice, but the price point and scarcity makes it totally inaccessible for most people, myself included. This one is also colorized, which I don’t like because it deviates from the original.

Related: Moon-landing hoax still lives on. But why?

cS: So how does “Apollo 11 Flight Plan: Relaunched” differ from those previous projects?

Gibson: I would call this reprint the first successful faithful reconstruction. I base that claim on several things:

We took the time to reproduce both the Final version and Revision A. That’s why it comes out 400 pages, not 362. As far as I’m aware, no one has done that before.
The book on Kickstarter was an attempt at a faithful reconstruction, but it failed rather badly due to missing pages, clearly incorrect fonts, etc.
Other reconstructions have either differed significantly (colorization), or haven’t been reconstructions at all (cleaned up scans).

Another difference is that I’ve pledged to release print-quality source files of the reproduction after I’ve funded the next project. It cost a lot of money to do this reconstruction, but the material being reproduced is an important part of history, and so it should be available to everyone.

And most importantly, the cover is extremely cool.

“Apollo 11 Flight Plan: Relaunched” reproduces both the mission’s final flight plan and Revision A. “And most importantly, the cover is extremely cool.” (Image credit: RelaunchSpace)

cS: What work was involved in creating your version of the flight plan? How many people were involved and how long did it take to prepare?

Gibson: Everything started out with me identifying the sources to be used. I settled on a scan from the Honeysuckle Creek Tracking Station (opens in new tab) in Australia as the basis for the reproduction. There are a couple of others that you can find on the internet that were used just for cross checking in case something wasn’t clear. I also bought all the ones available on the internet to use as a reference, though they turned out to not really be needed.

In batches of 50 pages, I made sure everything on the page was legible. I made sure all of the fonts had been identified, then send the pages and fonts on to the layout artist I had hired.

As a side note, the hardest issues we had to work through was the fonts to be used. I personally spent about two months trying to track down the exact fonts NASA had used. Luckily I found a copy of the first NASA style guide that named a couple of them. Some others I was able to identify with the help of the “identifythisfont” subreddit [on Reddit.com]. Then for every font, there are many slight variations of that font from different vendors. So we had to put them side by side and debate which one matched the best.

Unfortunately for us, some of the fonts in the flight plan aren’t really fonts at all. They were just metal type from computer printers of the day. In those cases, we either trolled through hundreds of fonts looking for a match or, in one case, had someone actually make a font from the original images where we couldn’t find a match.

Including the cover artist, there were four of us involved. Work was completed in about nine months.

cS: Other than finding (or creating) the right fonts, were they any other challenges you faced? Was there anything you wanted to do but found you could not?

Gibson: The biggest challenge was definitely finding the right layout artist for the work. I paid probably a dozen different people to reproduce a few pages as a work sample before finding the right person for the job. It was worth it in the end though because the guy I landed on was incredibly detail oriented and enthusiastic even now.

I wanted to do the printing as faithfully as the reconstruction but found out that it was nearly impossible at the current moment.

The first issue is that, as far as I have been able to tell, five ring binder mechanisms are no longer available. The second issue is that the specific type of loose leaf paper I wanted to use is unavailable due to supply chain problems. A third issue was that no printer could find the specific peach colored card stock that was used by NASA. I will probably revisit all of this in the future and give it another try.

The same pages that were reconstructed for “Apollo 11 Flight Plan: Relaunched” flew on board the first moon landing mission and were referenced in Mission Control. (Image credit: RelaunchSpace)

cS: What did you learn about the Apollo 11 mission from working on recreating its flight plan?

Gibson: The biggest takeaway I got from doing this reconstruction was how wildly impressive NASA engineering was. They managed to plan the lunar landing out in incredible detail without the benefit of modern computing.

As a career programmer, this impresses me as much as the actual lunar landing.

cS: How would you categorize your relaunched flight plan? Is it a reference book? A coffee table book? A curiosity?

Gibson: It is definitely a great reference book. My hope is that one day it gets cited in an academic paper. But in practical terms, it’s definitely a curiosity and conversation piece for the truly hardcore space fans out there.

My hope here is that it becomes a must-have in every space race fan’s collection.

cS: Is the Apollo 11 flight plan the only NASA document you wanted to publish? Are there others you have in mind or are even now in work?

Gibson: This reproduction is the seed for an ongoing project I’m calling RelaunchSpace. The concept is that each reproduction pays for the next one, so it just rolls on one release at a time. I’m only thinking of reproducing space race-era documents now, but I could also see doing reproductions of hardware that have some practical use like stowage bags.

The next book in the series is the Apollo 11 Mission Report from 1971 (it looks nicer than the 1969 version). That reproduction is already about 70 percent done. Currently, I’m stuck on trying to locate the originals of a couple of pictures of moon rocks.

Once that one is done, I’m planning a third that will be all of the documents taken aboard the command module, including the very interesting LM (Lunar Module) Timeline Book.

When that trilogy is complete, I want to run a Kickstarter campaign to offer all three as a numbered, boxed set. Assuming that all goes well, my current thought would be to next do a trilogy of the three NASA style guides that have been published just for a change of pace.

Gibson will be using his Twitter account @RelaunchSpace (opens in new tab) to share one page a day from “Apollo 11 Flight Plan: Relaunched (opens in new tab)” beginning Saturday (July 16), the anniversary of the mission’s launch.