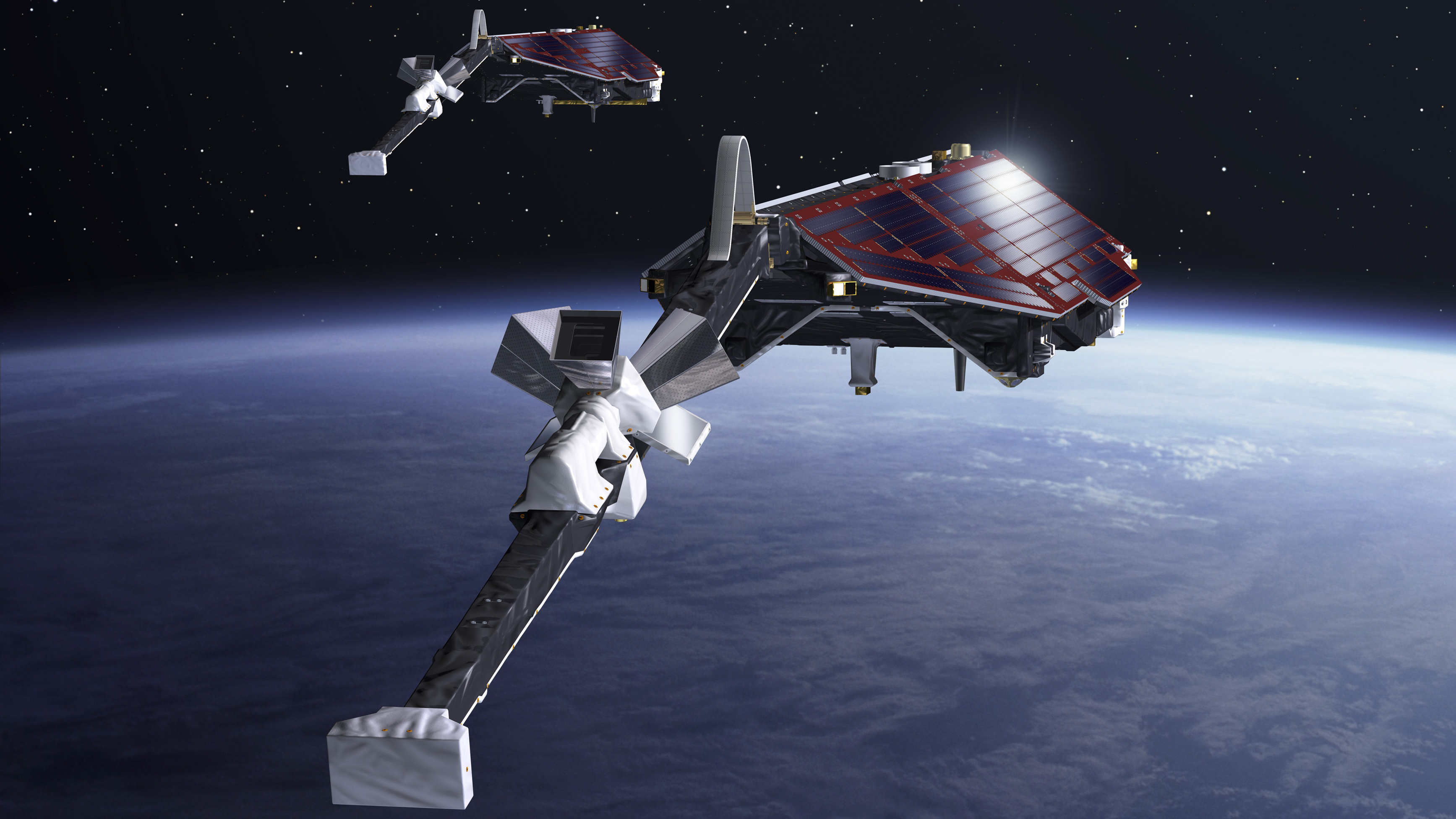 In October 2003 satellite controllers lost track of hundreds of spacecraft for days after a major solar storm hit Earth. Experts worry that with the increase in the number of satellites and debris orbiting the planet in the nearly twenty years since, the next big solar storm could throw the near-Earth space into chaos for weeks.

The U.S. Space Surveillance Network (SSN) currently tracks about 20,000 objects larger than 4 inches (10 centimeters) in low Earth orbit, the region of space at altitudes below 620 miles (1,000 kilometers). Some of these objects are operational satellites, but most are defunct spacecraft, spent rocket stages and debris fragments created in collisions. SSN experts use radar measurements to maintain a catalog that enables them to keep tabs on where these objects are in space and project their trajectories into the future. When two objects, for example a piece of space debris and a satellite, look set to get dangerously close to each other, the satellite operator receives a warning. In some cases, they conduct avoidance maneuvers to prevent a crash.

But there is a catch. The positions of those objects are not always accurate and this uncertainty increases during solar storms, sometimes to a point where accurate collision predictions are impossible.

“In the largest storms, the errors in the orbital trajectories become so large that, essentially, the catalog of orbital objects is invalidated,” Tom Berger, a solar physicist and director of the Space Weather Technology Center at the University of Colorado, Boulder, told Space.com. “The objects can be tens of kilometers away from the positions last located by radar. They are essentially lost, and the only solution is to find them again with radar.”

Related: Wild solar weather is causing satellites to plummet from orbit. It’s only going to get worse.

This uncertainty is a result of changes in density of Earth’s thermosphere, the upper layer of the atmosphere at altitudes of 60 to 370 miles (100 to 600 km). Thin gasses at those altitudes interact with particles emitted by the sun in coronal mass ejections (CMEs), large eruptions of magnetized plasma from the sun’s upper atmosphere, the corona. These interactions heat up the thermosphere and make it swell. The denser gasses from lower altitudes move higher up where satellites suddenly experience stronger drag, which changes their speed and pulls them toward Earth.

Berger, who described his concerns in a paper called Flying Through Uncertainty, published in 2020 in the journal Space Weather, is not alone in having concerns about the effects of a major solar storm.

“When we get a very big event and we see an intense heating of the [upper] atmosphere, satellites are not going to be where they’re supposed to be,” Bill Murtagh, the program coordinator of the Space Weather Prediction Center (SWPC) of the U.S. National Oceanic and Atmospheric Administration (NOAA), told Space.com.

A batch of Starlink satellites launched in February 2022 flew directly into a geomagnetic storm that sent the satellites back to Earth. (Image credit: SpaceX)Satellites out of control

Fortunately, such powerful solar storms don’t happen that often. Since the so-called Halloween storms in October 2003, Earth has enjoyed a period of rather mild space weather. In 2012, however, our planet was just nine days away from being hit by a CME that would have sparked a solar storm of the century.

Still, the relatively low frequency of these events is no solace to space safety experts, who dread what would happen if we were to lose control of the orbital positions of satellites in today’s increasingly busy space environment. When the Halloween storms of 2003 hit, Berger said, there were only about 5,000 tracked objects in low Earth orbit, and despite the loss of control over the situation, no collisions were reported. But the number of objects in this vulnerable region of space has increased four times since 2003, and with it the risk of orbital crashes.

“A typical satellite operator may now be spending 30 to 50% of their time dealing with collision alerts,” said Berger. “Low Earth orbit satellite operators receive about one warning per day now. About one per week is serious enough to analyze in greater detail, and about every few weeks they have to maneuver to reduce the probability of the collision. It wasn’t like that in the past.”

With the enormous uncertainty about positions of satellites and debris objects in the aftermath of a major solar storm, spacecraft operators might just “throw up their hands,” keep their fingers crossed and wait for the Space Surveillance Network to retrace the objects piece by piece, Berger said.

Most modern satellites are equipped with GPS receivers, which will enable the operators to maintain some knowledge of the satellites’ positions (although solar storms can cause GPS blackouts and significant inaccuracies in the position readings). But debris objects don’t have GPS and can only be located with radar. Even with the increased investment into new tracking radars and the emergence of commercial players in the field of debris monitoring in recent years, it might take weeks to fully restore today’s much larger catalog, said Berger.

The environment around our planet is full of space debris. (Image credit: ESA)Kessler syndrome

During those weeks, spacecraft operators are not likely to sleep well, and it’s not just about the risk of damage to any single spacecraft. For several years now, the space safety community has been ringing the alarm bells about the growing amount of debris in low Earth orbit. This debris, together with the increase in the number of operational satellites over the past decade (a result of the advent of mega-constellations such as SpaceX’s Starlink), threatens the sustainability of orbital operations.

Experts think that the early stages of the so-called Kessler syndrome, an unstoppable cascade of collisions that can render the orbital environment so unsafe that it would be unusable, are already underway.

A few unlucky strikes during a period of chaos in the wake of a powerful solar storm may easily tip the scale. And then? In the worst case, a scenario akin to the plot of the 2013 Oscar-winning movie Gravity could unfold while the world would watch on helplessly.

“Without significant improvements in [space traffic management] and space weather forecasting technology, there is a real risk that we will reach exponentially increasing levels of cascading collisions that could render the [low Earth orbit] domain unusable for decades or possibly centuries,” Berger and his colleagues wrote in their 2020 paper, adding that such a situation would have “devastating consequences for weather forecasting, space-based intelligence, and space commerce.

A solar storm with the power to cause all that will certainly come. One day. Berger hopes that if we avoid one for at least the next five years, the space weather forecasting community will be able to improve their models of the upper atmosphere to account for the changes in drag caused by space weather events. Such models, in turn, would enable spacecraft operators (and the Space Surveillance Network), to keep track of things in space with a sufficient level of reliability even in the middle of the most powerful geomagnetic upheavals caused by solar storms.

Last year, NOAA introduced what they call the Whole Atmosphere Model, which extends the regular weather-forecasting model up to the altitude of about 370 miles (600 km). So far, the lack of measurements at these altitudes limits the accuracy and reliability of the model’s output, Tzu-Wei Fang, a space weather scientist at NOAA, admitted to Space.com in an earlier interview.

In the meantime, as the sun wakes up after a lengthy sleepy period and produces more sunspots, solar flares and CMEs, spacecraft operators are already feeling the pinch. In February, SpaceX lost 40 brand new Starlink satellites after launching into what has been described as a rather mild geomagnetic storm. The European Space Agency reported earlier this year that its Swarm satellites, which measure Earth’s magnetic field from the altitude of about 270 miles (430 km), have been sinking ten times faster since December 2021 than in all the previous years since their launch in 2013.

SpaceX, after the loss of its satellites, agreed to provide NOAA with data about the drag experienced by their satellites to help finetune the forecasting models. Such cooperation between satellite operators and agencies, according to Berger, may provide a useful way forward.

“The profusion of satellites with GPS, like Starlink, in this sense could be a benefit,” said Berger, whose team cooperates with NOAA on the development of the models. “The GPS gives you precise orbital data, which we can use to infer the density of the upper atmosphere. These data points would help us to push our model into agreement with the actual conditions, just like it’s done with normal weather models. If we make sure that the model continually tracks the actual conditions, we can hopefully extend the predictions out to six to 12 hours into the future with a decent level of accuracy.”

Murtagh, however, warns that a powerful solar storm can come at any time and with little advance warning. The Halloween storm of 2003, during which tens of satellites got temporarily lost, arrived as the sun’s 11-year cycle of activity was waning and heading toward a minimum.

“The sun was really unremarkable [prior to the storms],” Murtagh said. “We had no idea what was going to happen just one week later.”

Although the sun has been pelting Earth with CMEs at regular intervals since the beginning of time, it’s only been rather recently that humankind became dependent on technologies that are vulnerable to such outbursts.

The two most extreme solar storms in known history both happened before the era of space exploration started. The so-called Carrington Event of 1859 famously triggered auroras that were visible all the way to the Caribbean and knocked out telegraph networks all over Europe and America.

The so-called New York Railroad Storm in May 1921, set afire multiple telegraph hubs all over the world, including one at the Grand Central Terminal railway station in New York.

Both of these storms were up to an order of magnitude more powerful than the Halloween storm of 2003.

“If something like the 1921 storm occurred today, it could have a very serious impact on orbital operations for weeks, not just hours or days,” said Berger. “And because we know that we’re going to get hit by a major storm at some point, we need to be doing the research to improve the models and make sure they can forecast the changes that happen in these geomagnetic storms better than they can now.”