Captain Jack Sparrow is joining your Sea of Thieves crew. That’s either very good or very bad, depending on your point of view–from what we’ve seen of the upcoming Pirates of the Caribbean tie-in expansion, A Pirate’s Life, he seems like he’s pretty fun to have around. On the other hand, he likes to get into the rum and he’s a bit of a loose cannon.

Either way, Jack Sparrow represents a major shift in Sea of Thieves in its third year, and with A Pirate’s Life, Rare’s multiplayer live service game looks to be taking a big leap forward. As Rare showed in a presentation demonstrating what we can expect from the expansion, A Pirate’s Life adds a huge amount of content that goes beyond just Pirates of the Caribbean-themed items and stories. It’s adding a bunch of new characters, new enemies, and new places to explore.

The presentation gives a sense of what you’ll be playing in A Pirate’s Life. It’s centered on five new Tall Tale stories that will send you through the new content’s narrative, where you’ll meet up with Captain Jack and then find yourself on a collision course with Pirates of the Caribbean villain Davy Jones. Sparrow has entered the Sea of Thieves after stealing some seemingly magical pirate treasure, which offers him ultimate freedom, but he was pursued to the pirate paradise by Davy Jones. While Jones has dominion over the fate of doomed pirates in the Caribbean, he holds no control over the scalawags in the Sea of Thieves. He’s looking to change that through force, so with Sparrow on your crew, you’ll set out to find a way to stop him.

The Tall Tales will send you to two big new locations where their stories take place. The first is the Sea of the Damned, where dead pirates go in Sea of Thieves before they’re brought back to the world of the living by the Ferry of the Damned. The second is the Sunken Kingdom, a big underwater location. As creative director Mark Chapman explained in a question and answer session with journalists, you won’t just wander into either the Sea of the Damned or the Sunken Kingdom like you might in other locations in Sea of Thieves.

“You’ll head to the Sea of the Damned locations and Sunken Kingdom locations twice as part of the story, and each time you’re introduced to completely new locations as part of those regions,” he said. “When you’re in the Sea of the Damned, you’re in a specific instance, if you will, for you and your crew. So you can go there solo, you can go there with a crew of three other players on a galleon, and it’s just you in that world. We transport you through the Tunnels of the Damned, and it almost feels like a ride.”

Though the locations will be specific instances, and therefore not fully available when you’re not playing the Tall Tales, both regions will be pretty expansive, and you’ll be able to spend a fair amount of time in them. For example, in the Sea of the Damned, there’s a shipwreck-filled town called Sailor’s Grave, with ghostly pirates hanging around and doing things like drinking at a tavern or losing money in a gambling den. Chapman said both the Sea of the Damned and the Sunken Kingdom are big places with lots to find beyond the beaten path, and if you want to uncover all the collectible lore and find everything the Tall Tales have to offer, you’re going to want to fully explore them. 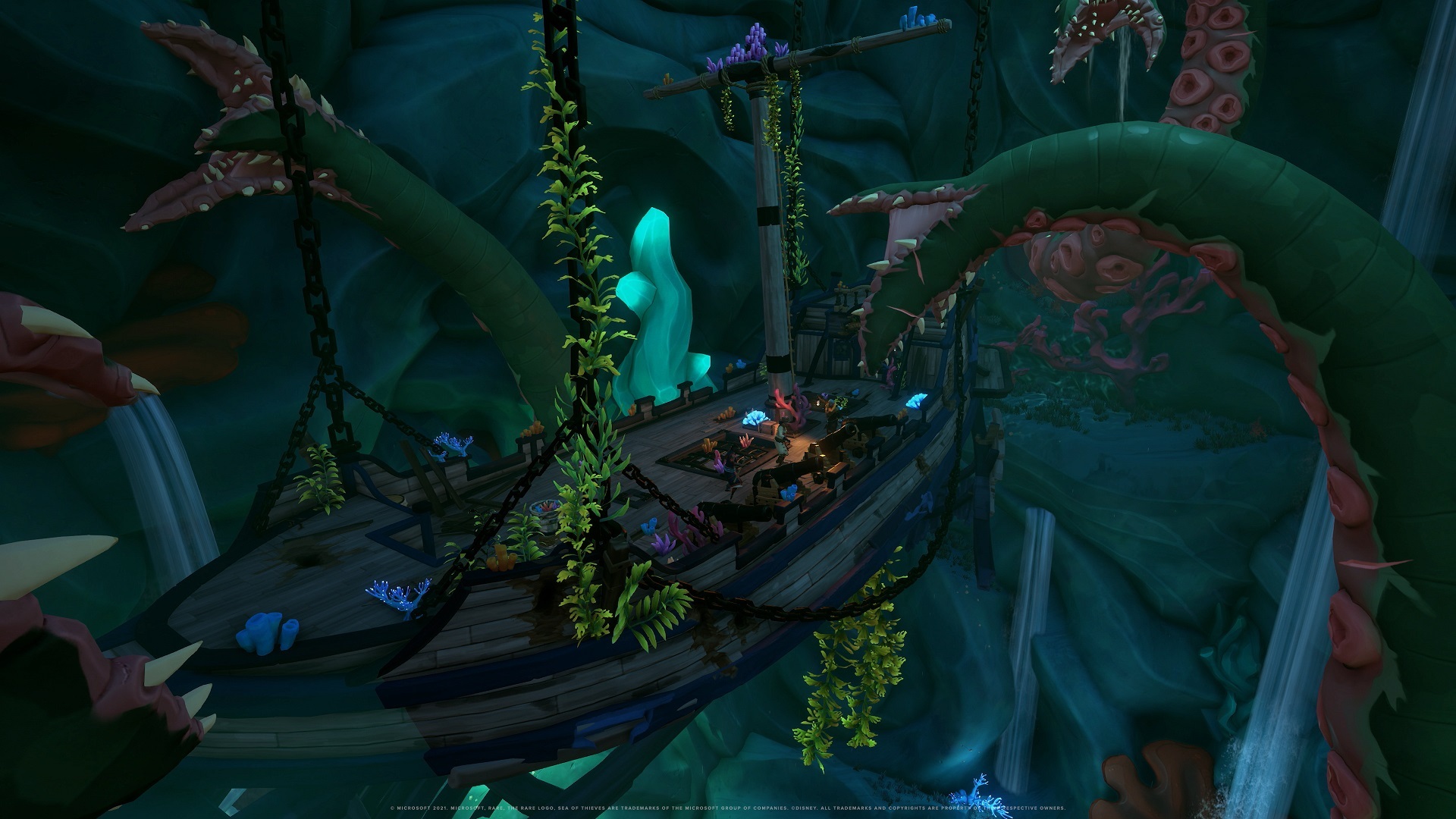 Outside of the story across the five Tall Tales, A Pirate’s Life adds a lot of new things to the whole of Sea of Thieves, refreshing it in some big ways. Chief among those additions is the introduction of new enemies. For its whole life, just about the only AI-controlled enemies you would face in the game were various types of skeletons (apart from sharks and the occasional kraken or megalodon attack), but A Pirate’s Life brings lots of new baddies to obstruct you as you help Jack Sparrow on his quest, or even just search for the usual booty.

On land, the new enemies are called “ocean crawlers,” and they’re essentially hybrids of sea creatures and humans. They break down into three types: the burly crab ocean crawler, which is armored and packs some devastating close-range hits; the clam ocean crawler, which spews poison around it, forcing you to fight it at range; and the electric eel ocean crawler, which can create a lightning shield around itself that, when broken, sends electricity chaining between you and your crewmates. The ocean crawlers fight as a crew, just like skeletons, so you’ll see them working together to some degree as you battle them. There are also phantom pirates, who fight together and are more similar to the player pirates you’re used to facing–but, you know, ghostly.

Underwater, your new adversaries are sirens. These mermaid-like creatures are fast and deadly, with close-range melee attacks and long-range bursts of song that come at you like projectiles. There are standard sirens, as well as leaders, which bear a new weapon called the Trident of Dark Tides. With it, they can fire blasts of energy at you. The sirens all sport a gem in their chests that allows them to create a shield around themselves that will damage players, but heals any sirens in close proximity, so you’re going to want to deal with them as quickly as you can.

You get a new tool to deal with all these creatures too, though. You can actually use the Trident of Dark Tides yourself, which allows you to fire off a charged blast of energy. Like the new enemies, tridents can be found throughout Sea of Thieves, so you can take them into older content or even use them against other players.

If you’re a Pirates of the Caribbean fan, it also seems like there will be plenty for you to enjoy in the expansion. Chapman said that having Jack Sparrow around means he actually contributes to your crew as an AI-controlled companion. That should make A Pirate’s Life a little more viable even for lone Sea of Thieves players, since you’ll have Sparrow as backup.

The character also seems pretty faithful to what we’ve seen in the films. Jared Butler, who voiced Sparrow in Kingdom Hearts III, reprises the role here, and Rare said it worked with a stunt actor who’d portrayed Sparrow in the movies to make sure they got all his mannerisms and movements right for in-game animations.

There are also new cosmetics you can earn or buy that are all themed after the Pirates films. Those include costumes to let you dress like Jack Sparrow or the crew of the Black Pearl, and ships inspired by the movies’ vessels, such as Davy Jones’s Flying Dutchman. You can even snag a new pet–the prison dog from the Disneyland attraction, complete with the set of keys his pirate pals need to escape their lockup.

Apart from that, it looks like there will be plenty of Pirates of the Caribbean Easter eggs to hunt down in the new content. You’ll catch iconic music from the Pirates films, for instance, and also hear it weaved together with original music from Sea of Thieves. There are also elements and locations from the Disneyland ride that inspired the films–but with a Sea of Thieves twist. Chapman said Rare was able to get some of the original voice actors from the ride to record new dialogue for the locations in A Pirate’s Life, and they even used vintage 1960s microphones to replicate the sound of the ride’s voice-over work. 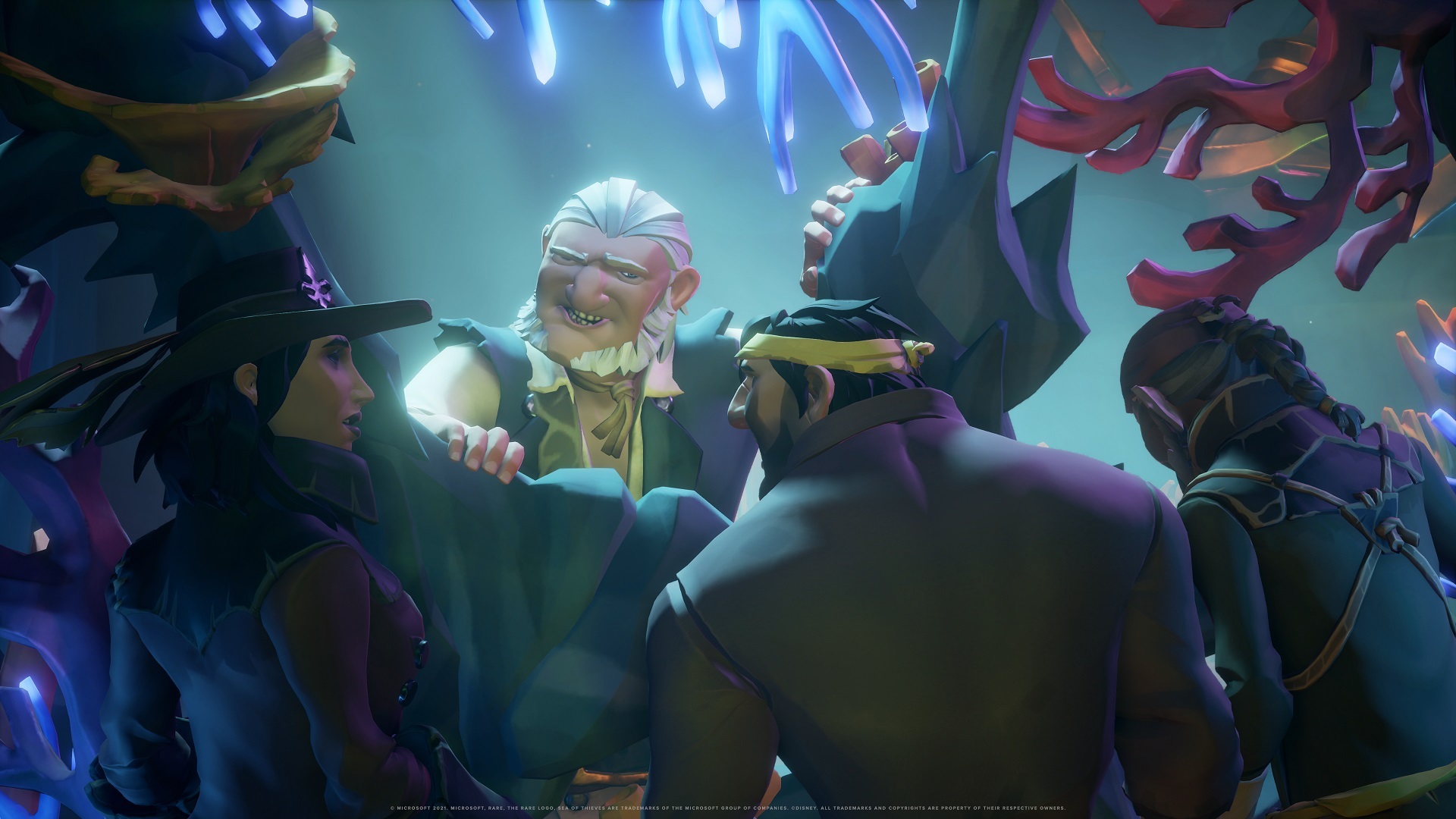 “It feels like this ghostly memory of the past brought to life,” Chapman explained. “It’s such a powerful nostalgic callback for people who love the attraction.”