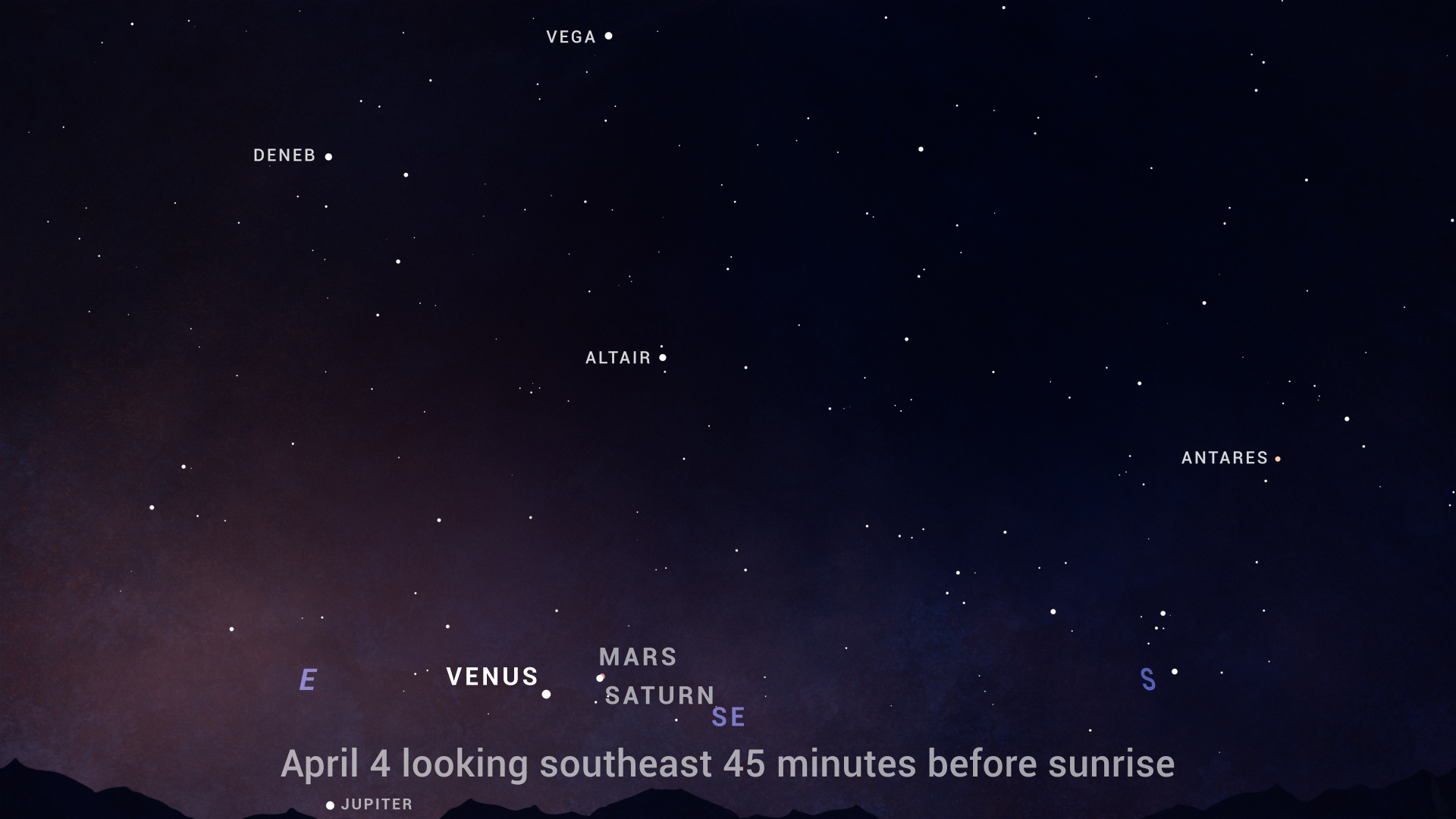 Look up at the sky before sunrise Saturday (April 9) to see a trio of planets, twin stars and the moon entering its next phase.

The planets Venus, Mars and Saturn appear close together in the southeast predawn sky. Saturn moved steadily toward Mars, reaching its closest proximity on Tuesday, April 5, when the planets were only half a degree apart. While the three worlds still appear close to one another, Saturn is slowly moving away from Mars each day, according to a statement from NASA (opens in new tab).

Venus can also be seen to the lower left of Saturn and Mars, rising about 10 degrees above the southeastern horizon before sunrise. You’ll need to get up early to see the three planets align.

Related: The brightest planets in April’s night sky: how and when to see them

There’s even more to see in the twilight sky on Saturday. In addition to the planetary trio, the stars Castor and Pollux shine bright in the constellation Gemini the Twins. The stars appear to the lower right of the moon, which reaches its first quarter phase.

Castor and Pollux are the two brightest stars in the constellation, representing the heads of the twins with fainter stars outlining the pair’s bodies. Pollux is a red giant star located 33 light-years from Earth, while Castor is actually made up of six stars, located about 51 light-years away.

Skywatchers can use the moon as a reference point to spot the twin stars, as the moon passes near Castor and Pollux on April 8 and 9, according to EarthSky.org (opens in new tab).

Reaching its first quarter stage on April 9, the moon will appear prominent in the evening sky. It will be visible starting around 7:47 p.m. EDT (2347 GMT) and set in the middle of the night. Skywatchers will have the best viewing opportunity shortly after sunset, as dusk fades to darkness.

The moon will rise 69 degrees above the south-western horizon, appearing almost exactly half illuminated. It will dip below the horizon by 3:06 a.m. EDT (0706 GMT). However, the moon will stick around longer in the night sky over the next few days, setting later each day, according to In-The-Sky.org (opens in new tab).

Editor’s note: If you capture a stunning photo of the night sky and would like to share it with Space.com for a story or gallery, let us know! You can send images and comments to [email protected].

« ‘I’ve never paid with crypto before’: How digital assets make a difference amid a war » Is it time to send another message to intelligent aliens? Some scientists think so.