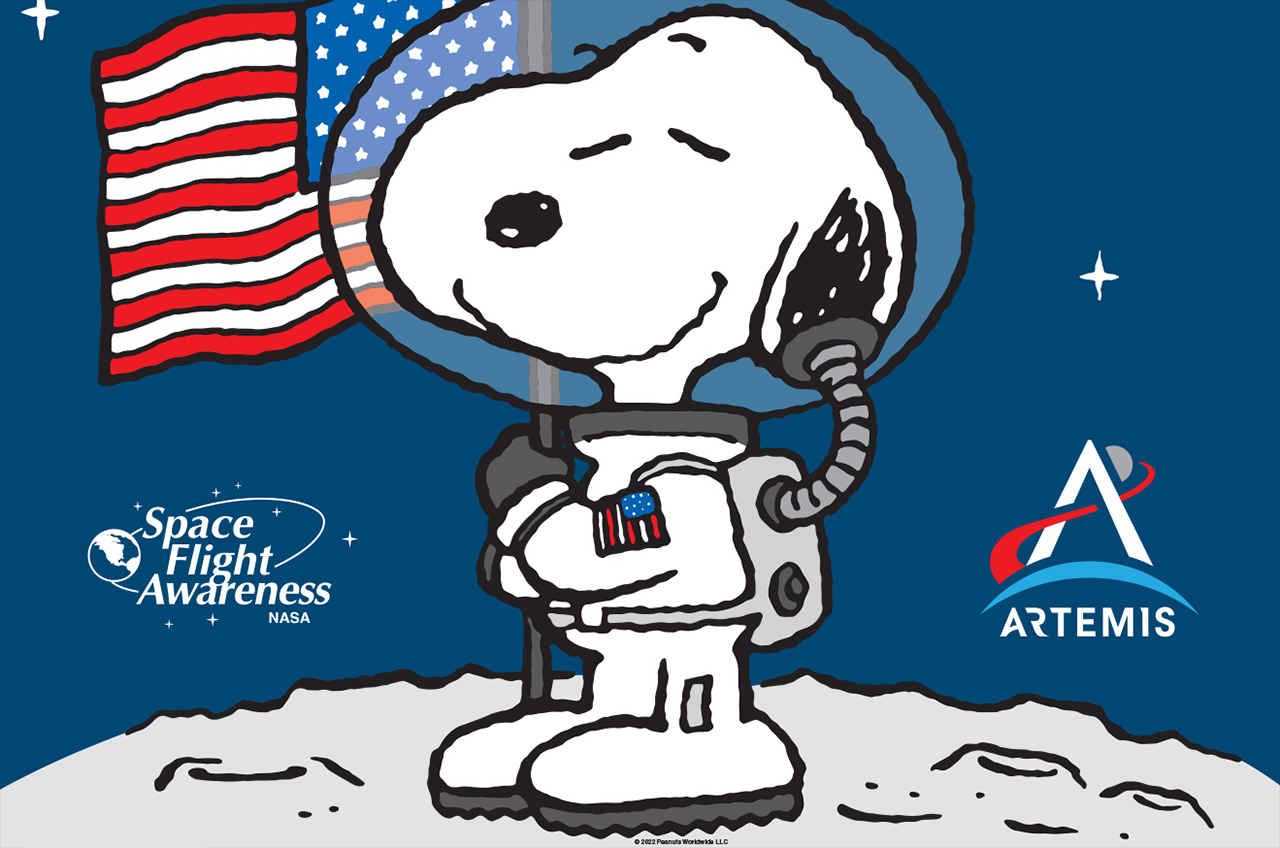 The upcoming launch of a beagle to the moon has inspired the return of a decades-old poster at NASA.

As announced earlier, Snoopy, the pet dog from Charles Schulz’ Peanuts comic strip, will fly in doll form aboard NASA’s Artemis I mission around the moon and back. The toy, wearing a one-of-a-kind spacesuit, will serve as the flight’s zero-g indicator, floating “weightless” once in orbit.

To celebrate Snoopy’s latest spaceflight (opens in new tab) and continue the character’s nearly 55-year-old role as a safety mascot and symbol for mission success (opens in new tab), NASA’s Space Flight Awareness (SFA) program has a created a new motivational poster based on a design that was first used almost 30 years ago (opens in new tab).

The original poster displayed Snoopy, clad in a white spacesuit, facing right and holding an American flag while standing on the lunar surface. It was issued in 1995 in conjunction with the exhibit, “Around the Moon and Home Again: A Tribute to the Art of Charles M. Schulz,” which was hosted by Space Center Houston.

The 2022 poster depicts a similar Snoopy, only now he is facing left and has a big smile. “The Beagle Has Landed” and “Around the Moon and Home Again” is reproduced from the old poster, but now is in reference to the circumlunar Artemis I mission.

“The new version, conceived by the Exploration Systems Development mission directorate in partnership with the SFA program, was created in collaboration with Peanuts Worldwide, LLC,” Bristow wrote. “Peanuts found the original artwork and agreed to modify it for NASA’s new usage.”

The poster design was reused with the goals of employee motivation and building safety awareness for the Artemis I mission.

“Our success will change the world,” reads the text printed on the back of the poster. “When NASA returns to the moon, this time, we will be going with women and people of color! We’ll return in the spirit of goodwill and peaceful exploration alongside our industry and international partners.”

Snoopy, in plush form, will launch as the zero-g indicator on board NASA’s Artemis I moon mission in 2022. (Image credit: Peanuts Worldwide)

“Snoopy’s first mission was aboard Apollo 10 in May of 1969. Now, Snoopy is the zero-g indicator (opens in new tab) for the Artemis I mission!”

NASA has featured Snoopy on wall posters since first partnering with Schulz in 1968. The beagle has been drawn into designs (opens in new tab) for the Apollo, space shuttle and International Space Station programs.

Snoopy also stars on one of NASA’s highest honors: the Silver Snoopy Award. A package of the Silver Snoopy pins is set to fly on Artemis I (opens in new tab), which will then be bestowed to deserving employees and space program contractors in the future.

“Since its inception, this award has been a prominent part of the SFA Program and awarded to thousands of individuals — but less than 1 percent annually — who have contributed to astronaut safety and mission success,” said Alotta Taylor, SFA Program manager. “We are delighted to know Snoopy will have the opportunity to fly again and be a part of the Artemis program.”

SFA has made the new Snoopy poster available in digital form (opens in new tab) for NASA workers to download, print and display as desired.