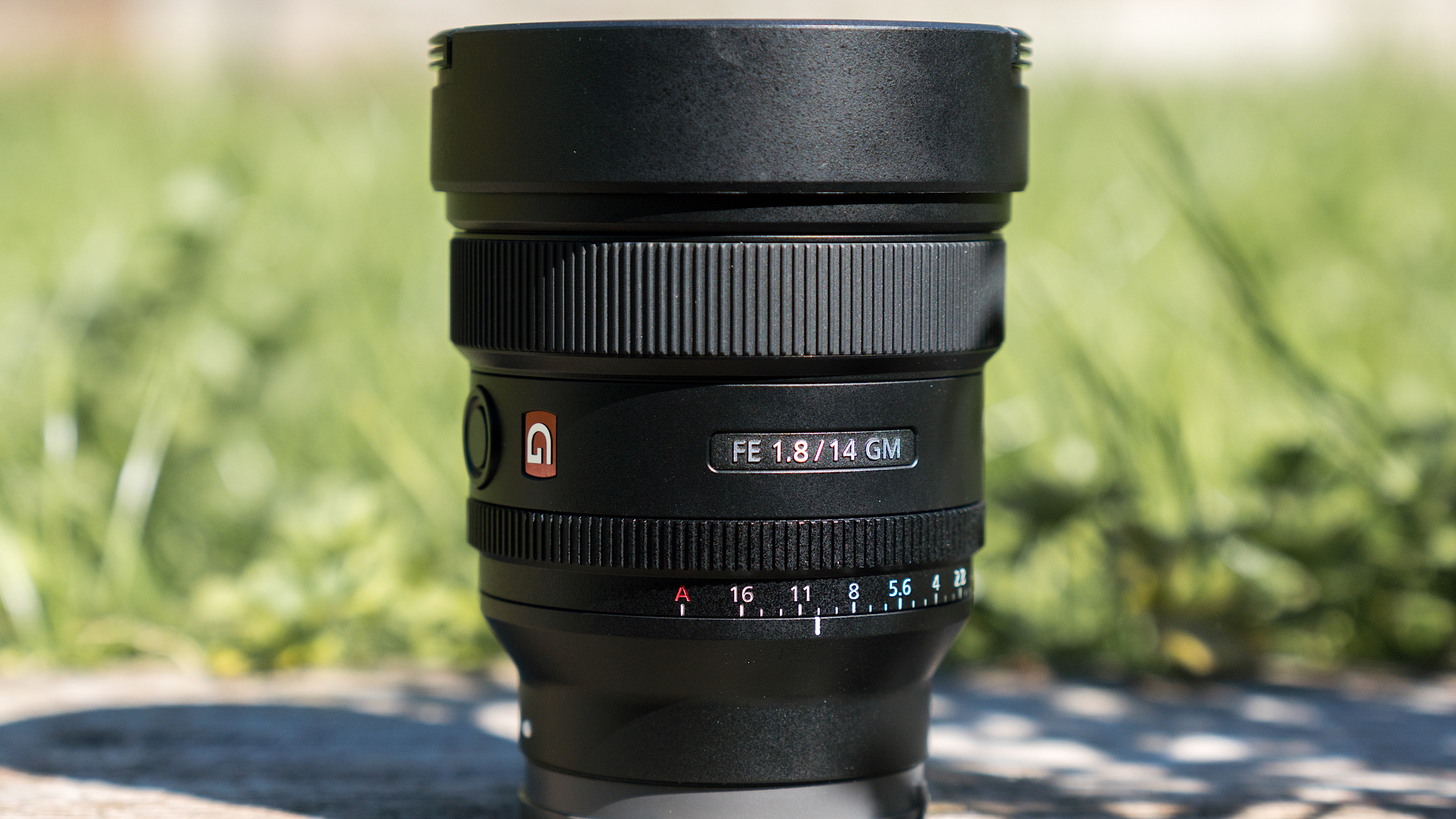 Sony released their ultra-wide angle FE 14mm f/1.8 G Master lens just over a year ago and it’s still standing firm at being one of the best 14mm prime lenses on the market. It’s a typical G Master lens in that it has a clickable aperture ring, a function button, AF/MF button, and a linear focusing ring. This is an incredibly fast, lightweight lens with excellent Sony build quality, suited well to astrophotography, landscape photography and street & architectural photography.

It does come with a pretty heavy price tag, so we’ll be weighing up the pros and cons to determine whether this lens is really all it’s cracked up to be.

The lens doesn’t look too out of place on a full-frame camera body, keeping trim against the body. (Image credit: Kimberley Lane)Small and lightweightAperture ringBulbous front element

A huge advantage this 14mm lens has over its competitors is its portability. Small and lightweight, this 460g lens is 2.4x lighter than Sigma’s 1120g 14mm lens, and 2x lighter than the 950g Sigma 20mm lens. It’s very similar in size and weight to Sony’s 20mm f/1.8 G Master lens, but for a 14mm this small size is almost unheard of. This lens is currently the lightest, fastest and widest prime lens from Sony, making it an absolute dream to take out on shoots.

This lens also features a clickable aperture ring, which is something Sony has been starting to introduce into their newer lenses. There is the option to turn the click switch off to enable silent focusing, which is great for shooting video so you won’t be able to hear the clicks in the background. The click feature acts as a bit of a lock, too, as you wouldn’t be able to accidentally move the aperture ring as you would with the click switch turned off. It’s a great feature to have though — particularly if you’re out shooting from lower angles you can change your aperture easily when you can’t see what’s on the screen very well. ASMR fans may also appreciate this click feature.

Another part of its design worth noting is the bulbous front element. With the lens being an ultra-wide angle, the domed glass is just par for the course, but the disadvantage of that is that you’re unable to use any traditional screw-in filters on the front of the lens. You can get filters that fit onto the rear of the lens, but obviously, this is an additional cost on top of an already very expensive lens. Another downside of this is that the front element is always unprotected, as some photographers prefer to fit a clear UV filter to save the glass from being scratched or broken.

The 14mm focal length and wide aperture of f/1.8 means the lens can drink in light over a wide field of view, perfect for astrophotography. (Image credit: Kimberley Lane)Beautifully sharp photosSuperb image qualityGreat at minimizing distortion

For such a wide-angle lens, the image quality is incredible from f/1.8 all the way up to f/16. Not only are the images incredibly sharp, but it creates beautiful bokeh and dramatic sunstars down to apertures as low as f/4. Many lenses struggle to be used wide open at f/1.8, but this one has no issues at all. There’s the tiniest bit of vignetting, but nothing that can’t be fixed in post-processing. The image quality is insanely impressive considering this lens doesn’t have image stabilization, even though most full-frame camera bodies do tend to have in-body image stabilization nowadays. If you’re more of an astrophotographer you’ll be using it on a tripod anyway.

There are barely any barrelling or chromatic aberrations and has minimal distortion. The lines created with the lens are incredibly straight even towards the corners. You can see from the comparison images below that the lens correction tool in Lightroom only produces minimal corrections.

This lens produces beautiful, sharp images from the center of the image right through to the edges and corners, making it an incredibly versatile and reliable lens to have in your kit. Below is a comparison of the corner of an image at various different focal lengths.

Notice how sharp the lens is even when shooting wide open at f/1.8 and f/2.8 (Image credit: Kimberley Lane)Sony FE 14mm f/1.8 GM: FunctionalityFast aperture of f/1.8 makes it great in low lightGood close focusing gives flexibility to the lensExcellent autofocus makes it a breeze to use during the day

One of the things that makes this lens so special is its fast f/1.8 aperture. The only other lens out there that rivals this lens is the Sigma, which, as we discussed earlier, is over twice the weight of the Sony lens. The fast aperture makes this lens an absolute dream for astrophotography as it enables you to use slightly longer shutter speeds before you begin to get star trails, and its wide-angle means you can capture even more of the sky in the shot.

This lens has a minimum focusing distance of around 25cm, and it’s wild how close you can actually get to a subject and still be able to focus on it. It’s quite strange at first if you aren’t used to such a wide-angle lens, but it enables you to capture images and angles you never dreamed of.

An example of the fantastic close focusing abilities of the lens (Image credit: Kimberley Lane)

The setup showing exactly how close the lens was to the subject for the previous image (Image credit: Kimberley Lane)

The 14mm also has excellent autofocus, with virtually no hunting even in low light. The eye autofocus is exceptional, especially when we tested it on a couple of very uncooperative black cats. The ability to live-track a subject as it moves through the frame is impeccable. The smooth focus ring makes manual focusing a breeze, but there’s no hard infinity manual focus stop which is typical for Sony lenses but could be an oversight for easy astrophotography which is where this lens shines.

If money were no object, then of course the answer is always going to be ‘yes you should’, because this really is a fantastic lens through and through. However, this lens is very expensive, especially for such a niche focal length. It’s currently retailing for $1598, but it’s important to bear in mind that it’s also holding its value well on the used market.

This 14mm is ideal for seasoned astrophotographers or professional street photographers that need a wide field of view combined with sharp optics and a fast f/1.8 maximum aperture. With all the benefits this lens has to offer, it’s worthwhile if you shoot, or want to shoot, the type of photos it excels at.

If this product isn’t for you

The Sony 14mm f/1.8 G Master is admittedly quite a niche lens, which may only be the perfect option for a specific style of photography. If the 14mm isn’t the one for you, you could consider these alternative lenses to round out your kit.

The Sigma 14mm f/1.8 SG HSM Art (opens in new tab) is a DSLR lens that was repurposed for mirrorless cameras. It does come in slightly cheaper than the Sony lens, although a great deal bigger, and could also be a great option for Canon users looking for an ultra-wide angle lens. For a more affordable option, the Samyang AF 14mm 2.8 (opens in new tab) is a great alternative at a fraction of the cost if the Sony is out of your budget, but you still want a lightweight lens with that wide 14mm focal length.

Finally, if you find yourself wanting to stick with Sony, you could always consider the Sony 20mm f/1.8 G Master (opens in new tab). This lens is half the price of the 14mm but also produces excellent results for astrophotography. Although it’s a slightly tighter focal length, it’s probably not enough to make a massive amount of difference to the final image, plus the 20mm would lend itself better to other styles of photography.

« Analyst on $17.6K BTC price bottom: Bitcoin ‘not there yet’ » You can see the moon eclipse Uranus tonight (Sept. 14) in a rare occultation