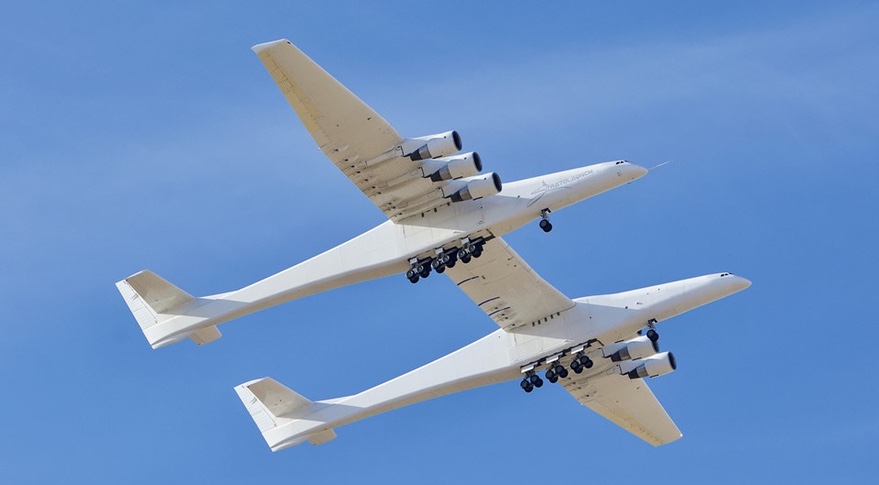 The Roc carrier aircraft from Stratolaunch which performed its fifth flight test on May 4, 2022. (Image credit: Stratolaunch)

The Roc carrier aircraft, the biggest airplane ever built, completed its fifth test flight this Star Wars Day (May 4).

Roc, made by the hypersonic vehicle company Stratolaunch, is the largest airplane in the world, with a wingspan stretching 385 feet (117 meters) across. The 500,000-pound (about 227,000 kilograms) aircraft is designed to carry hypersonic vehicles into the air. Today, Roc, which looks something like a “double airplane” aced its fifth flight, following its last test flight in February. These tests will ensure that Roc is ready to perform its duties.

“The force is strong in this plane,” Stratolaunch tweeted on Wednesday (May 4). “Roc has successfully landed back at Mojave Air and Space Port and our team is already busy analyzing the data gathered today. #Maythe4thBeWithYou #LetsRoc.”

The force is strong in this plane. Roc has successfully landed back at Mojave Air and Space Port and our team is already busy analyzing the data gathered today. #Maythe4thBeWithYou #LetsRoc pic.twitter.com/XK7jz6SEETMay 4, 2022

Roc took off from the Mojave Air and Space Port in California today as a Cessna 550 Citation Bravo chase plane tailed it. The aircraft flew with a new pylon, a structure on the wing of an aircraft that can hold payloads, that will help it achieve its ultimate goal of carrying hypersonic vehicles.

“Practice makes perfect!” Stratolaunch tweeted today. During today’s test flight, the Stratolaunch team worked to build “on the landing gear testing that occurred during the fourth flight test,” the tweet added. “The team is continuing tests gear operations through mid-air cycling of the system.”

Practice makes perfect! Building on the landing gear testing that occurred during the fourth flight test, the team is continuing tests gear operations through mid-air cycling of the system. pic.twitter.com/Kb5jZigx8wMay 4, 2022

The team aimed to “focus on flight envelope expansion and validating the recently installed pylon that will carry and release Talon hypersonic vehicles,” the company added in a follow-up tweet.

Stratolaunch was started in 2011 by Paul Allen, a Microsoft co-founder who wanted to develop an alternative way to launch satellites. Allen died in 2018, a year before Roc took its first test flight in 2019. Following Roc’s first flight test, Stratolaunch changed ownership later in 2019 and in 2020 announced that it had shifted focus to flying hypersonic vehicles.

Specifically, Stratolaunch aims to loft vehicles that fly at Mach 5, or five times faster than the speed of sound.

In 2020, the company started construction on the the Talon-A, a prototype hypersonic vehicle designed to launch from Roc. The Talon-A will be 28 feet (8.5 m) long, weighing 6,000 pounds (2,700 kg) and is designed to fly as fast as Mach 6, or six times the speed of sound.

Stratolaunch initially planned to perform the first drop tests with Roc and Talon-A in early 2022, but now the company is aiming to have the pair ready for full operational capability by mid-to-late 2023, company representatives have said.

« Cosmonaut assumes command of ISS ahead of Thursday morning departure of SpaceX’s Crew-3 mission » Firefox version 100 is here – is it finally time to switch from Google Chrome?