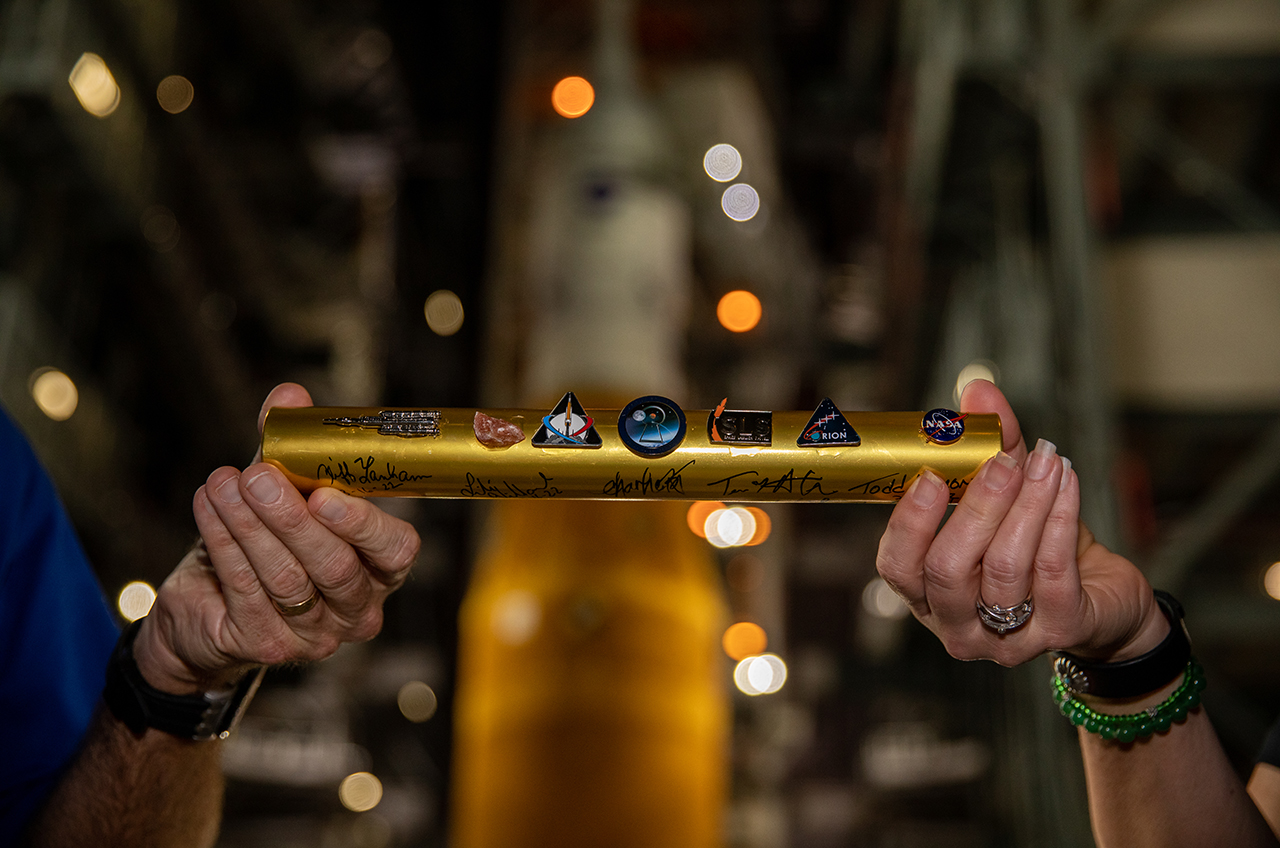 A small metal rod joined NASA’s new moon-bound rocket for an overnight move to the launch pad on Tuesday (Aug. 16), serving as a symbolic marker for the milestone event.

The logo-adorned golden baton (opens in new tab) was handed off by the Artemis 1 launch team to the crew driving the crawler-transporter carrying the Space Launch System (SLS) booster and Orion spacecraft to Launch Complex 39B at NASA’s Kennedy Space Center in Florida. Unlike the rocket, which, barring any problems, was making a one-way trip, the rod was set to return to the Vehicle Assembly Building (VAB) to then follow the mission from the ground.

“We created a small memento,” said Cliff Lanham, senior vehicle operations manager for NASA’s Exploration Ground Systems (EGS) program at Kennedy, in response to a question from collectSPACE.com. “We gave it to the crawler team, so they will be taking that out with them.”

The transporter will next return to the VAB, where the SLS components and Orion were stacked (opens in new tab).

“I’ll get the baton back when we’re back in the VAB,” Lanham said, “and then once we’re ready to go for launch, we’ll pass it back off, handing it off to recovery.”

Tuesday night’s trip was at least the second time that a similar baton made the trip with the crawler. Another golden rod was also on board the tracked transporter for the SLS’ first trip out to Pad 39B, ahead of NASA’s first attempt at performing a wet (or fueled) dress rehearsal in March. The test was completed in June, on the fourth try after a return to the VAB for repairs.

Earlier batons handed off for Artemis I events, including the arrival of the SLS core stage in April 2021 and first rollout of the vehicle to the launchpad in March 2022. (Image credit: NASA / Sam Lott/Kim Shiflett)

Prior to that first rollout (opens in new tab), Lanham presented the baton to launch director Charlie Blackwell-Thompson. She will oversee the Artemis 1 countdown from inside Firing Room 1 in the Launch Control Center (LCC), located adjacent to the VAB.

Blackwell will again be handed a baton before the launch, targeted for as soon as Aug. 29, to have it with her team of flight controllers in the LCC. It will then be given to the NASA and U.S. Navy recovery team, which will retrieve the Orion capsule from the Pacific Ocean after it splashes down from the moon at the mission’s end.

The foot-long (30.5 centimeters) baton is decorated with lapel pins, including five displaying the insignia for NASA, Orion, SLS, Exploration Ground Systems and Artemis 1. A last pin is in the shape of the SLS topped with Orion.

A small rock fragment retrieved from the crawlerway after a previous rollout is also affixed to the baton. The metal rod was signed by Lanham, Blackwell-Thompson and other members of the EGS and Artemis launch teams.

The baton is at least the third such memento created to mark Artemis 1 milestone events. An even earlier rod, similar in length but silver in color, was handed off by SLS stages manager Julie Bassler to Lanham in April 2021, when the SLS core stage arrived at Kennedy from Stennis Space Center in Mississippi.

“Like in a track relay, this handoff signifies the last leg of our assembling of the Artemis 1 SLS rocket, bringing us one step closer to launch,” officials posted (opens in new tab) to NASA’s Artemis Twitter account on April 29, 2021.

That baton featured raised metal shaped in the form of NASA’s insignia and the Artemis 1 logo, together with “Space Launch System.” Lanham and Bassler both initialed the rod as part of its handoff.

NASA’s Artemis 1 Space Launch System rocket and Orion spacecraft is seen atop a mobile launcher as it rolls out of the Vehicle Assembly Building to Launchpad 39B, Tuesday, Aug. 16, 2022, at NASA’s Kennedy Space Center in Florida. (Image credit: NASA/Joel Kowsky)

The Artemis 1 mission marks the first integrated test of the Orion, SLS and ground systems at Kennedy Space Center. An uncrewed flight test, Artemis 1 will provide the data needed for future flights to launch astronauts to the moon and eventually on to Mars.

The passing of the baton is a new tradition at NASA, started for Artemis 1. It is similar, though, to other symbolic activities (opens in new tab) practiced during earlier U.S. missions, including the exchange of flags and banners, as well as the carrying of philatelic covers (stamped and cancelled envelopes) on milestone moves and the flight of dollar bills.

collectSPACE.com is grateful to film and TV company Haviland Digital (opens in new tab) for supporting our Artemis 1 coverage. Their team has produced and supported titles such as the award-winning “Last Man on the Moon,” “Mission Control: The Unsung Heroes of Apollo” and “Armstrong.”