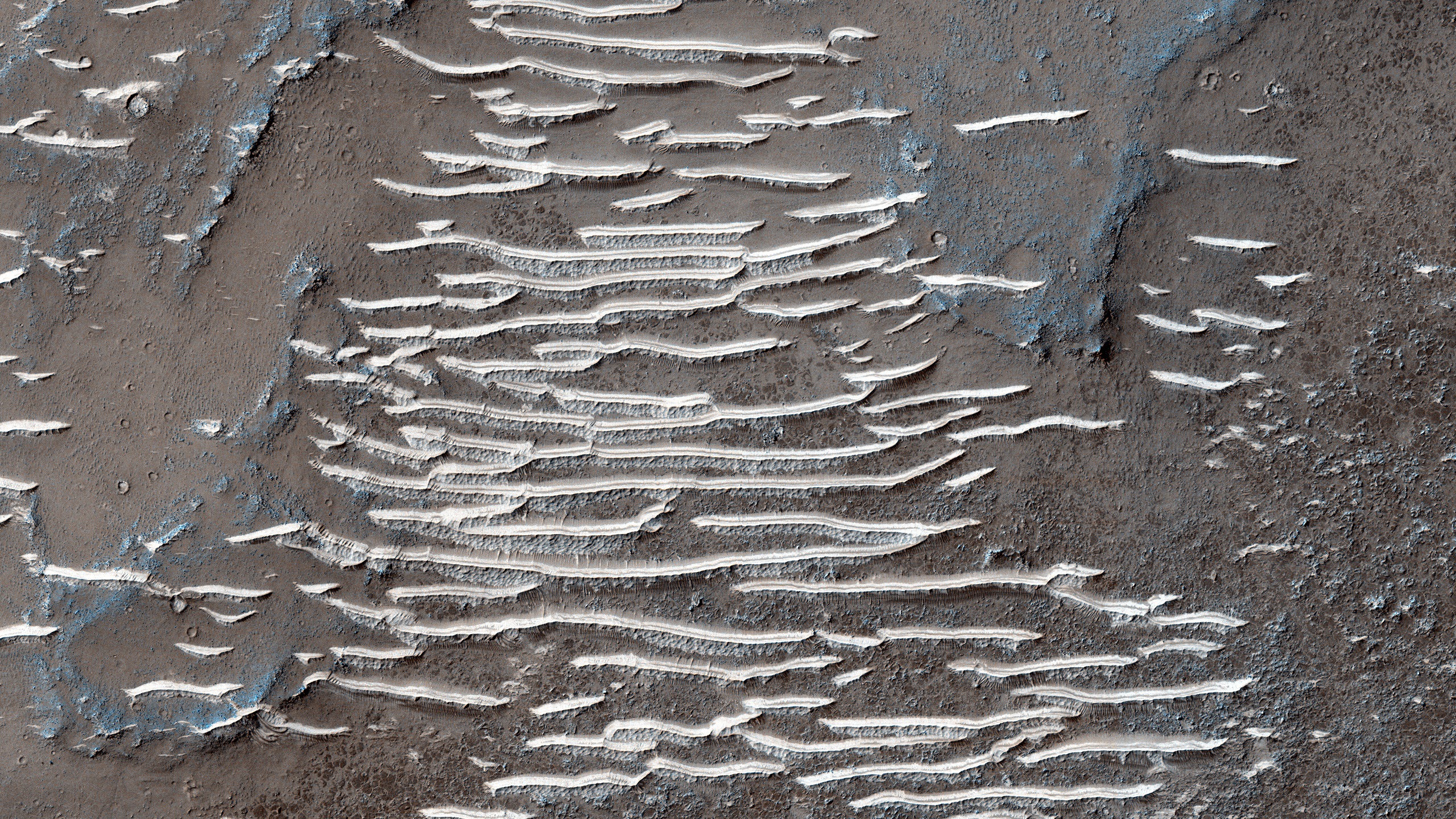 Strange icy ridges imaged by NASA’s Mars Reconnaissance Orbiter may show proof of dust, water or wind, depending on where you look. (Image credit: NASA/JPL-Caltech/UArizona)

This icy labyrinth looks like a piece of Martian cake.

The image of ice and dust layers on Mars from an orbiting NASA spacecraft may provide a window into the complex, water-filled history of the Red Planet, a new study suggests.

The puzzling ripples in this image are called transverse aeolian ridges (TAR). They are somewhat in between the size of dust particles and dust dunes, University of Arizona officials said (opens in new tab) in a Sept. 10 statement.

The icy steps were spotted in Solis Planum, south of a complex zone known as Noctis Labryinthus and somewhat southeast of Valles Marineris, a huge canyon on Mars.

TAR features like this on the Red Planet are of great interest to scientists because they show how Mars changed over time. The image was obtained using NASA’s Mars Reconnaissance Orbiter, courtesy of the university’s high-definition camera, known as HiRISE (High Resolution Imaging Science Experiment).

No one is sure how TARs form, exactly. “Ripples form from hopping sand grains, and dunes form from sand grains being blown over longer distances,” university officials wrote.

“One hypothesis for TAR formation is that larger grains like pebbles are rolled on top of smaller ripples; then, finer dust settles into the cracks, ‘inflating’ the pebbles, making the TAR larger than typical ripples,” the statement added.

A closer look at the image provides another layer of mystery, according to the university. Scientists spotted “a network of ancient, beaten-up channels” that may have been formed by water, or lava.

Transverse aeolian ridges are visible in this image of the Airy-0 crater on Mars taken by the using the High-Resolution Imaging Science Experiment on NASA’s Mars Reconnaissance Orbiter Sept. 8, 2021. (Image credit: NASA/JPL-Caltech/University of Arizona) (opens in new tab)

The image, obtained in 2015, represents scientists’ long-standing quest to better understand the history of water on Mars. Water is a crucial ingredient for life; that said, there is considerable dispute about how long running water may have persisted on the Red Planet, and whether the environment is or ever was hospitable enough for microbial life to flourish.

Many Mars missions have roamed the surface in search of water evidence in recent decades. The latest effort, NASA’s Perseverance rover, landed on Mars in 2021 along with the first-ever helicopter.

Perseverance is picking up the most promising samples for a future Martian sample return mission, which plans to use a spacecraft relay to bring back pieces of Mars to Earth in the mid-2030s.